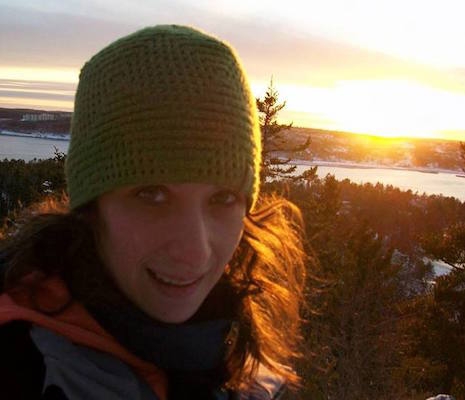 “The man who killed Catie Miller and dismembered her body was arrested early in the police investigation because his appetite for murdering women was so strong, officers feared he would carry out his fantasies again,” reports Susan Bradley for the CBC:

Jason James Johnson was captured on wiretaps talking “about his desire to become a notorious killer” and that he “would like to kill again before he gets arrested,” according to an agreed statement of facts presented Thursday in Nova Scotia Supreme Court.

The pair were both sentenced to life in prison. Johnson must serve 20 years in prison before being eligible for parole; MacDonald must serve 16.

In a separate article, the CBC publishes the agreed Statement of Facts presented to the court. (This article is graphic.)

There are three proposed multibillion-dollar facilities proposed for near or on the Strait of Canso in northeastern Nova Scotia. The leading contender, Pieridae Energy’s proposed $8.3-billion export facility for Goldboro, Guysborough County, has a looming final investment decision by its proponents.

However analysts are more willing and they say the odds of putting any LNG export facility on Canada’s East Coast are low.

“A Halifax professor and an Indigenous leader from Cape Breton are among Canada’s nine non-partisan senators named today by Prime Minister Justin Trudeau,” reports Cassie Williams for the CBC:

Daniel Christmas, senior adviser for the Mi’kmaq First Nation of Membertou, has also been selected. 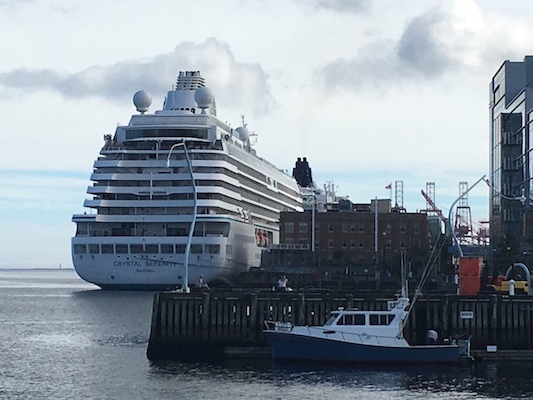 “I’ll say it again: we need to talk about the cruise industry,” writes Mary Campbell:

We need to talk about its actual impact on our local economy, its environmental impact on our coastal waters, its questionable labor practices and its crime problem. And we have to do it right now, before we pump 20 million crisp, beautiful, multi-purpose, municipal, provincial and federal tax dollars into a second cruise berth in Sydney.

Campbell goes on to interview Ross Klein, a sociologist at Memorial University and proprietor of CruiseJunkie, a collection of everything that is wrong with the cruise industry. Klein and Campbell unpack the self-serving economic impact claims generated by industry promoters, and especially the “indirect” impact claims — “which I picture as some sort of Rube Goldberg device involving croquet mallets and helium balloons,” writes Campbell. 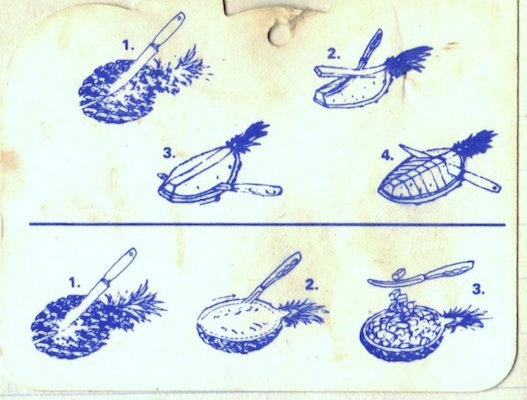 “I have a fondness for step by step instructions told with simple illustrations,” writes Stephen Archibald. And guess what? Aisle 1,348, Section R(4), Shelves 4 & 5 of the Raiders of the Lost Ark warehouse out at Cove 17 are committed to those very same instructions:

For example, over the last 30 or 40 years I’ve paid particular attention to the little diagrams attached to fresh pineapples. Let me show you a few examples I’ve saved.

Archibald has actually documented the evolution of “how to cut a pineapple” illustrations, from “ambiguous” illustrations in the early 1980s (shown above) to “a much more engaging style” in the late 1980s, through a “too clinical” stage and onto a current-day “refined” illustrative style.

And — no kidding — Shelf 3 in Section R(4), Aisle 1,348 of the Raiders of the Lost Ark warehouse is devoted to… chopstick packaging. And Archibald even has a how-to illustration on “How to fold a cat”: 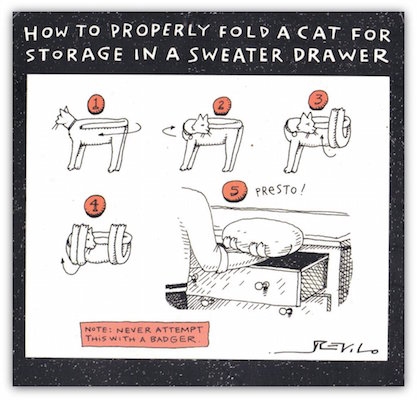 Archibald ends the post with a “how to tie a bow tie” illustration from the 1960s, which reminds me of the 2012 Michener Awards ceremony (the ceremony was in 2013 for articles written in 2012). Stephen Maher and I were both nominees — he for the robo-call story he co-authored with Glen McGregor, me for the PK thing.

This was a black tie event at Rideau Hall. I had rented a tux in Dartmouth, but somehow the tux rental place had forgotten to package the bow tie, so the afternoon of the event I frantically rushed around Ottawa and bought a clip-on bow tie from a surly French tailor at a formal wear place. But, hey, it all worked out. I was even a bit early for the event, and loitered around the entry way of Rideau Hall, looking at portraits of imperialists as the other guests arrived in limos, each welcomed by a footman with a ridiculous fuzzy hat.

Just minutes before the witching hour, Maher pulled up in a taxi without hubcaps, a hole in the muffler. Maher was flustered and in complete disarray, his bow tie looking like a deranged poodle attacking his neck. “Do you know how to tie a bow tie?” he asked me. I did not, but I knew that my boss, Kyle Shaw, had the skill, so I connected Shaw and Maher, and the two went off to the subterranean washroom with golden fixtures (really, Rideau Hall is the shit), and after a spell the pair emerged, Maher’s tie perfectly, er, tied. A piece of art. He looked great.

And just in time, as the Governor General’s aides-de-camp and eunuchs were just then lining us up for a grand entry into the hall. We reporters were at the front of the line so that we could occupy the first row of seats. We walked in, the crowd applauded, we took our seats. A duke or viscount or some such welcomed us, and the each of the reporters was called to the stage to give a short explanation of their nominated piece. Maher was first.

Understand that not even five minutes had passed from the time Maher emerged from the subterranean washroom with the perfectly coifed bow tie to the time he took the stage. Five minutes. Three-hundred seconds. He had moved all of about 40 metres. And there he was, addressing the various dignitaries and His Excellency, the representative of the Queen herself, and the deranged poodle had returned to his neck. He was a mess. A slob. An insult to bow tie wearers everywhere. It was the damnedest thing. As Maher was explaining the intricacies of tracking down Pierre Poutine, I kept wondering, “how the hell did that poodle get back there?” 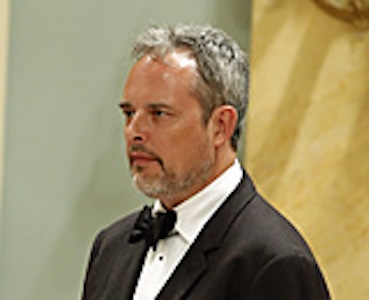 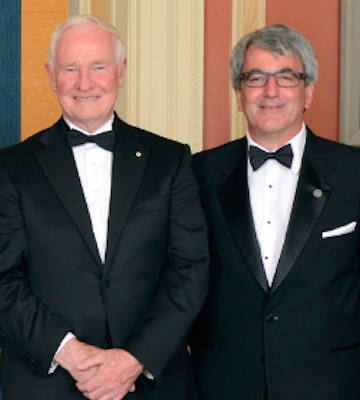 Me, three years ago when I was 20 years younger, my clip-on tie, and the Governor General. Photo: Cpl Roxanne Shewchuk, Rideau Hall, OSGG

I think I still have that clip-on tie I bought from the surly French tailor. I’ll look for it if I ever have another black-tie event.

The moose slaughter in the Cape Breton Highlands National Park is set to begin again.

Unlike nature’s natural selection of killing unhealthy animals, moose in our national park will again be killed indiscriminately on North Mountain.

Access to information requests reveal that of the 37 moose killed in the 2015 ‘harvest,’ there were nine calves, two juveniles and 26 adults which included 18 females. All of the adult females were pregnant so the dead count was even higher than the 37 quoted by Parks Canada, sadly due to at least 18 unborn babies.

What a sad state of affairs for the national park, allowing the slaughter of the very animals it is mandated to protect – calves and unborn babies among them.

According to a recent CBC news story, the Parks Canada manager of the boreal forest restoration project indicated there is no annual survey of moose in the Cape Breton Highlands National Park, but that the forest is monitored regularly.

By that statement alone, it appears moose are predetermined as the only cause in the decline of the boreal forest. Where is the 15 years (according to the Parks Canada website) of scientific evidence showing that moose alone are responsible, especially when there is no annual survey of moose? How can anyone call this ‘science’ when they don’t even know what that part of the equation – the number of moose – is?

I fail to see how the success of the ‘cull’ can be determined when the number of moose isn’t known in the first place. How can 90 per cent of North Mountain moose be killed – 90 per cent of what number? Is Parks Canada deliberately not giving a number because they want to kill as many moose as possible in this year’s time frame?

Without knowing the actual number of moose in the park, and specifically in the North Mountain region, there is no way to determine when 90 per cent have been killed. Will the killing just go on and on until no moose are left?

As a taxpayer, I strongly oppose using my tax dollars to kill protected moose in a national park. Information obtained through access to information indicates that it cost Canadian taxpayers about $430,000 to kill 37 moose in the 2015 ‘cull.’ If similar costs can be expected in the next three years we could be looking at nearly $2 million.

For nearly half a million dollars, or as much as two million dollars if we look at the big picture, think how many kilometres of fenced enclosures could be installed. This is something already proving successful on North Mountain by keeping moose out of areas and allowing the forest to regenerate. Think how many moose could be relocated to mainland Nova Scotia or other areas of Cape Breton where they would at least have a fighting chance at life.

Now they are part of a shooting gallery in a 20-square km. killing zone on North Mountain where helicopters are used to spot moose, transport hunters and haul dead moose. It is more a slaughter than a ‘cull.’

I do not understand the reasoning of people who prefer to have moose slaughtered as a first option, rather than as a last one, especially when their own evidence shows that another option is working on North Mountain to help regenerate forest growth.

BIO Technology (3:30pm, Room 1170, Marion McCain Building) — Michael Murphy, from the Gorsebrook Research Institute, will speak on “The Development of Technology for Oceanographic Studies at the Bedford Institute of Oceanography: The Early Years 1962-1986.” 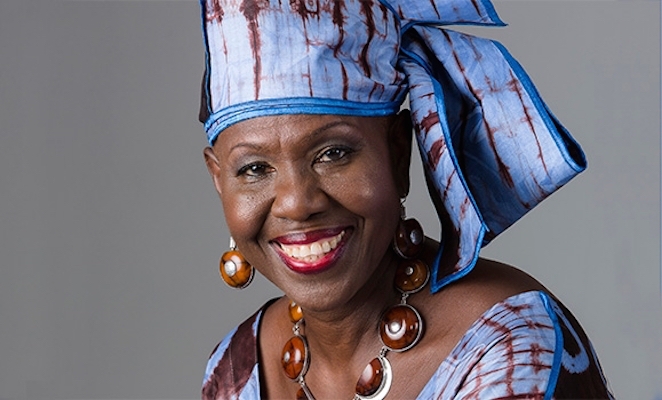 Dr. Cooper, of Jamaican descent, will be discussing stories of freedom and heroism within African culture in relation to pervasive Eurocentric accounts of “discovery” and “conversion” of so-called “savage peoples.” She says these stories “inspire us to act fearlessly in the present to fight against systems of oppression that continue to diminish the lives of so many Africans in the Diaspora.”

This has been a full week, and I seem to have gotten nothing done. I opened exactly zero emails yesterday, and so I’m incredibly behind. I’ll try to dig out over the weekend and get a couple of stories written besides. We’ll see.