You are here: Home / Featured / How a Young Avenue property is being flipped to “Canada’s worst landlord” 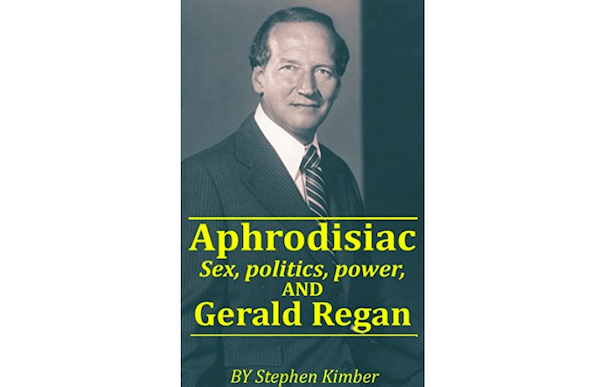 How do you reconcile the contradictory facts of our 19th premier’s life? You probably can’t. No matter what you write, you’re either rinsing Regan’s black heart in the cleansing stream of his passing or dancing gleefully on his grave. Most news reports I saw got it about as right as those complicated realities — and our changing times — allowed. Premier Stephen McNeil didn’t. 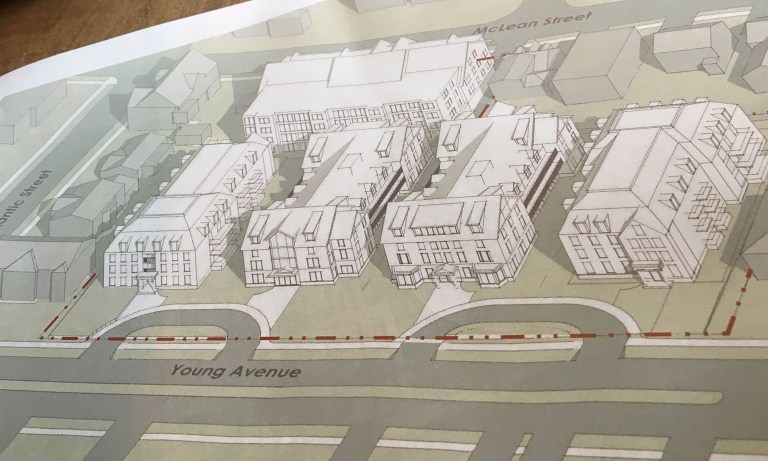 I’ve been going on for some time about how the Centre Plan is a gigantic lie, that like HRM By Design before it, so many exemptions have been grandfathered into the Centre Plan, and into the future so many more exemptions and work-arounds will be employed, that the plan is all but worthless.

Illustrating my point is this motion to be put forward by Spryfield councillor Steve Adams at tomorrow’s meeting of Halifax council:

9.1 Councillor Adams
Motion:
1. Notwithstanding Regional Council’s June 25, 2019 motion directing the Chief Administrative Officer to not accept requests for site-specific amendments to the Municipal Planning Strategies in Centre Plan Package B areas while the planning process to adopt Package B is underway, Regional Council directs the Chief Administrative Officer to:
2.
a) initiate a process to consider amendments to applicable Municipal Planning Strategies and Land Use By-laws for the following properties: PID 00047506 (Young Avenue, Halifax), 819, 823, 829, 835, 849, 853, 857, and 863 Young Avenue, Halifax; and 864, 866, 870, 876, 880 McLean Street, Halifax. The process will consider amendments that allow for contextually sensitive residential development that does not meet current development standards, so as to maintain the character of this area; and
b) request staff to follow the public participation program as adopted by Council in February, 1997.

Young Avenue, of course, is not in Spryfield, so why is the councillor from Spryfield sticking his nose into Young Avenue?

I am not at all convinced that the proposals would as the motion says “allow for contextually sensitive residential development that does not meet current development standards, so as to maintain the character of this area” given the designs I have seen, such as the one above.

I do not know why this has been brought forward, the Councillor who made the motion has not spoken to me about, other than when I approached him having heard of his intentions, and asked him to delay any such motion until I was actually going to be at Council, which he did.

Mason goes on to discuss the issue at length, and his entire post is worth the read. But I can tell him exactly why this has been brought forward: Because Steve Adams is baldly doing the bidding of the very-connected Tsimiklis family (whose members include “the worst landlord in town“), which intends to flip a development approval to a Toronto company called Starlight Investments, owned by Daniel Drimmer.

In a timeline Mason includes in his post, he notes:

August 9 2019 – Meeting the proponent who started saying if he did not get what he wanted that he would build 14 60′ tall houses and the neighbourhood would blame me.  I told him I do not respond well to threats.

He then stated that he wanted to build 4 large buildings that looked like houses, with underground parking, and 10-20 units each, and a four story building on MacLean.  I said I could not support that.

I suggested he hire a consultant that did public engagement and come back with a proposal for buildings that were exactly or almost exactly what was allowed in the current R1 zone and then take it to the public and try and engage the neighbourhood and get them on board.

I said if there was neighbourhood support, I would bring the motion to regional Council, but that he had to meet with the broad community first, and respond to what they said.

The proponent told me he needed an initiation as quickly as possible so that a purchaser in Toronto would pay him over $10 million for the site.  I said that was not really a consideration in terms of planning.

Interestingly, development along high-priced Young Avenue demonstrates how big money is warping the entire housing market, not just on Young Avenue, but in all of Halifax, all of Canada, and indeed all across the world. Given the new reality, we cannot “build our way to affordability”; the market dynamic is towards still more return for property owners, not less.

Writing last year for the delightful in-the-face-of-power Carleton University site The Leveller, Josh Hawley shows how Daniel Drimmer (the owner of Starlight Investments, but also of Transglobe, “Canada’s worst landlord“) was involved in the eviction of over 500 low-income people from an entire neighbourhood:

In the Heron Gate neighbourhood of south Ottawa, tools from the world of finance and a flow of European capital are being used to fuel the largest mass urban displacement in Canada.

It’s a long and purposefully complex story, but Hawley demonstrates how big money is making it increasingly difficult for low-income people to find housing.

This is what is happening with housing: inequality everywhere is increasing, and rich people have scads of money. They used to put that money into more or less productive investments like factories and such, but now there’s more return from simply parking it in real estate. So we have a construction boom everywhere — pretty much every city and town on the planet has an explosion of construction cranes. Real Estate Investment Trusts (REITs) are channeling still more money into real estate, and so we’re seeing gigantic sales like the 2017 purchase of Highfield Park, which necessarily led to recent rent hikes of over $100 per unit in what used to be affordable north Dartmouth — the entire point of buying an existing apartment complex is to squeeze more money out of it.

There’s not a magic point in the near future where this over-heated market corrects itself. A thousand more units or ten thousand more units will not suddenly make rents go down because of some imagined invisible hand job of competitiveness, so long as the landlords are forever seeking higher return and are in any event an effective oligopoly.

As I’ve said before: the only way to bring affordability back to housing is to have a significant and ongoing public investment into off-market housing (social housing, co-ops, etc.) and to impose rent controls. Why the hell are we allowing rents imposed on the working people of Halifax to increase to unaffordable levels just to further enrich an Ontario firm backed by European gazillionaires?

I wonder if Steve Adams is getting a cut of that $10 million. I’m sure he’d deny it, but what otherwise motivates him? Maybe class loyalty. Being included in the club brings benefits, whether explicably stated or not.

A silly thing like the Centre Plan hasn’t a chance. 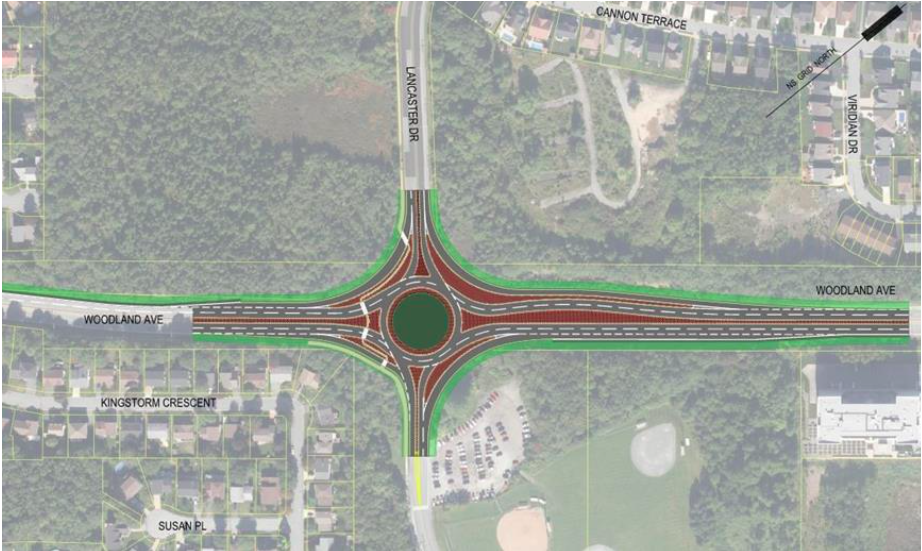 Also at its meeting tomorrow, Halifax council will take up a recommendation from the consulting firm EXP Services to build a roundabout at the intersection of Highway 118, Lancaster Drive, MicMac Boulevard, and Woodland Avenue.

The recommendation comes as a result of very high collisions at the intersection, which were summarized in this chart:

“The order of magnitude financial requirement associated with conversion of the existing signalized intersection to a roundabout,” reads the staff report, “was estimated to be in the range of $3.5 million.” Staff thinks the province will contribute to that cost, as  is a provincial road. 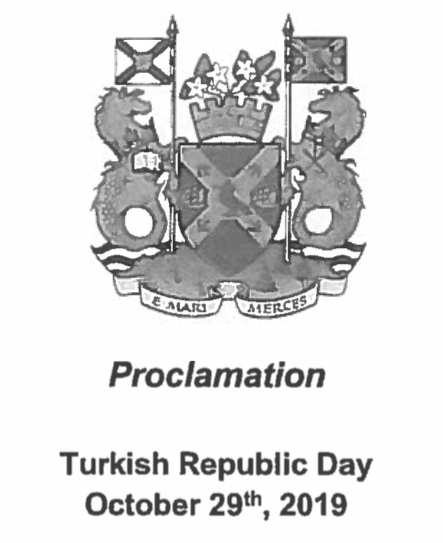 Republic of Turkey has played a critical role in international efforts for peace, prosperity, and stability; and

Canadians of Turkish descent in Halifax have played a significant role in the educational, cultural, economic and civic development of our community through sharing their rich cultural and heritage and through their dedication to the responsibilities of good citizenship; and

All Turks and people of Turkish descents (sic) around the world will be celebrating Turkish Republic Day;

THEREFORE, BE IT RESOLVED THAT, I , Deputy Mayor Tony Mancini do hereby proclaim October 29, 2019 as Turkish Republic Day in the Halifax Regional Municipality.

Dated at Halifax, Nova Scotia
this 29th day of October 2019

Such proclamations are commonplace. Since then, for example, the mayor has proclaimed World Pancreatic Cancer Day, International Day of Persons with Disabilities, and Transgender Day. Notice of the proclamations are listed as “information items” at the end of each council agenda, and everyone pretty much ignores them.

The problem with the Turkish Republic Day proclamation, however, was that it came just as Turkish-supported troops were being unleashed upon the Kurds in Syria thanks to US President Donald Trump’s sudden withdrawal of US troops from that nation. So celebrating the Turkish Republic exactly at that moment for its “critical role in international efforts for peace, prosperity, and stability” was maybe a bit much?

Community Services (Tuesday, 10am, One Government Place) — the committee will ask about “Employment Supports for Income Assistance Recipients.”

Two infinite lower-triangular matrices $\textsl{v}$ and $\upgamma$ are related to integer partitions; they are inverses of each other. The matrix $\textsl{v}$ comes from an analogue of the M\”{o}bius $\mu$ function, while $\upgamma$ comes from generalizing counting complete partitions, which have all possible subsums.

Bring your own infinite lower-triangular matrix.

We had a time at the Examiner subscription party last night, which is why today’s Morning File is a bit on the short side.