1. Hooray for our side 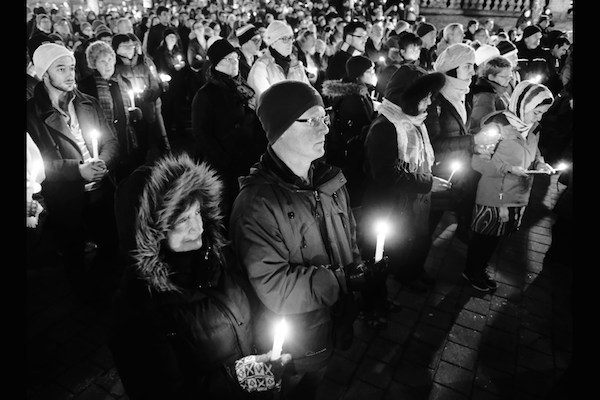 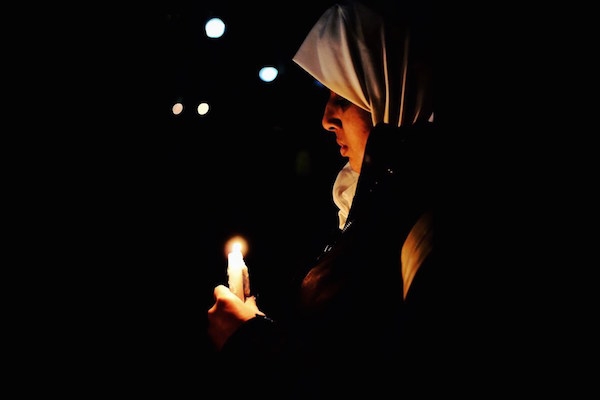 “Hundreds gathered for a candlelight vigil Monday evening in Halifax’s Grand Parade in front of city hall to mourn those killed in a mass shooting at a Quebec City mosque,” reports the Canadian Press.

As with last week’s Women’s Marches and the widespread political demonstrations at US airports and town squares in response to Trump’s executive orders banning Muslims from the country, yesterday’s vigils for those murdered at the Quebec mosque show a new willingness for people to gather together publicly — the numbers of people attending these gatherings are significantly higher than they have been in years past.

This is a very good thing.

Public gatherings are important because they fight back against the prevailing message of our times, which is that we’re merely atomized individuals, utterly disconnected from and yet always in competition with each other. There is a direct line from Margaret Thatcher’s claim that “there is no such thing as society” to Stephen Harper’s refusal to “commit sociology,” and it runs right through a rejection of shared values and common purpose.

This is the ideology of neoliberalism — the creed of “every person for themselves, loot-the-planet because there’s no collective wealth or shared responsibility.” This perverse notion has been the philosophical framework for our economies for the past 40 years. Of course such a pervasive ideology can’t be contained to economic matters: it drives nationalist and hate-filled attacks on “the other,” such as the attack on the Quebec mosque and Trump’s orders.

Demonstrations are at their best the epitome of democracy: demonstrators are trying to reach out to their fellow citizens, showing that there’s a voice that should be considered. But over the past few decades, there’s been a cultivated disdain for public political demonstration — demonstrators have been characterized as dirty hippies, malcontents, and egoists. The reality, as Stephen Stills sang, is something else:

A thousand people in the street
Singing songs and carrying signs
Mostly saying, “hooray for our side”

And yes, a vigil is by definition a political demonstration, in this case an affirmation of values, very much a statement of “hooray for our side.” Attendees’ mere presence is making a public statement that something isn’r right in the world, and they’re not standing for it.

Arm chair philosophers and trollish contrarians will continue to look down their noses at public demonstrations: they achieve no good, they’re a waste of time, and so forth. But there are immediate benefits to demonstrating: the feeling that one is at least doing something, as opposed to standing by idly while the world goes askew.

But the most important benefit of public demonstration is a sense of camaraderie. There are other people out there in the world who feel as you do, or at least with whom you can agree enough with for the point of the demonstration. This camaraderie, this exercise in shared purpose, is a rejection of everything neoliberalism has been teaching us. It is, I think, the most important thing in the world. “We are citizens, not competing consumers,” is a radical statement.

I used to think that climate change was the existential threat of our times. That threat hasn’t abated at all, but with the rise of American fascism, there is a more immediate concern. While there’s much we can do on the environmental front, we won’t be able to fully address climate change until we defeat the fascist Trump.

Demonstrations won’t defeat Trump or violent hatred by themselves, but they are one important pillar of a broad attack. Demonstrations, well, demonstrate that there is another way to organize our society: Hooray for our side, the side of tolerance, of shared purpose, of collective action to achieve mutual benefit.

Incidentally, I stopped by the Grand Parade last night and took a few photos, but the pics are lousy because I have no clue how to take night-time photos and no idea how to frame crowd photos. But striking Chronicle Herald photographer Ted Pritchard was there and took the photos that open this post. There is simply no replacement for this kind of work — not from scabs, and not from reporters with iPhones.

2. A Chronicle of errors 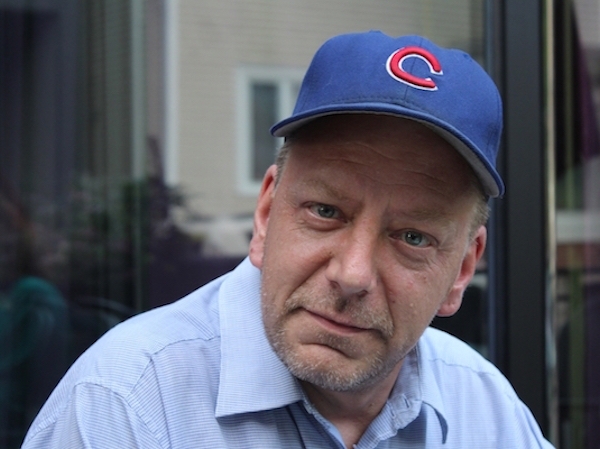 “Is the Chronicle Herald, in fact, the shittiest daily newspaper in Canada?” asks Russell Gragg:

I decided to pore over a week’s worth of the current iteration of the Chronicle Herald. I hadn’t looked at an issue since the day the strike started but, really, how bad could it possibly be? Surely there was no way the paper of record for an entire province could possibly be worse than a weekly tabloid out of small town Saskatchewan, right?

What I found was a paper rife with typos, spelling errors, grammatical mistakes, and basic ‘Journalism 101’ fuck-ups.

I warn you: this will take a while. Get a cup of coffee, let the cat curl up on your lap, then click here to read “A Chronicle of errors.”

It’s my understanding that seasoned media professionals gave the scab reporters fair and ample warning about the impact their Chronicle Herald “work” would have on their careers. There is so little money in journalism. All we have is our integrity and the currency of our reputation. Note to scabs: Has the public humiliation been worth it? Do you really think that clips from the Chronicle Herald will help you secure another job? Do you realize that there is NO HIDING PLACE?

As the late Earl Woods said to his son, Tiger (aka Tiagra) Woods: “What were you thinking?”

Russell, incidentally, leaves today for a new life in Toronto. He’ll be working with Jesse Brown at Canadaland. Russ, who launched the Examineradio podcast, has been a great friend and commiserante (which isn’t a word, but should be). I’ll miss him greatly. 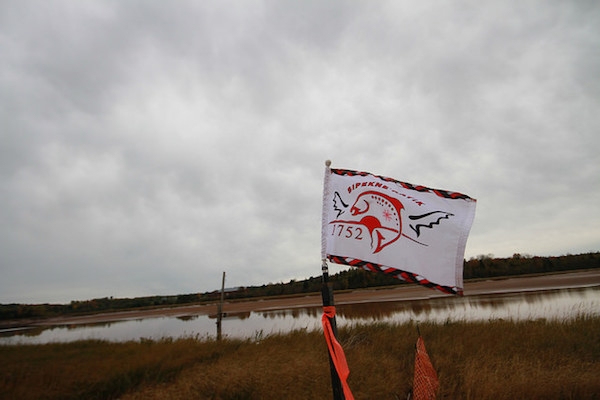 In essence, the impact of Hood’s ruling scraps the province’s previous rejection of the First Nations appeal and orders the minister to revisit the Sipekne’katik request to reconsider the decision to green light Alton Natural Gas Storage. At the same time, the judge refused a request by the First Nation to halt work on the project owned by AltaGas now dormant for the winter.

“Five universities are taking legal action against the Nova Scotia Teachers Union over work-to-rule, saying the ongoing job action is a threat to the careers of future teachers enrolled in education programs across the province,” reports Sherri Borden Colley for the CBC:

To graduate with a bachelor of education in Nova Scotia, students require a minimum of 15 weeks of practicum.

“That clock on those 15 weeks started to tick in early January when they were supposed to be within the classroom in their respective practica,” [Kent MacDonald, president and vice-chancellor of St. Francis Xavier University] said later in an interview.

I’m no lawyer, but it seems to me the right to strike is meaningless if it’s trumped by a requirement that teachers mentor student teachers even during a job action.

The commentariat are silent today.

I will introduce a notion of proarrow for graphs, simpler than the one hinted at in the  previous talks and give some justification for it. Then I will look at the properties of the double category of graphs this gives. 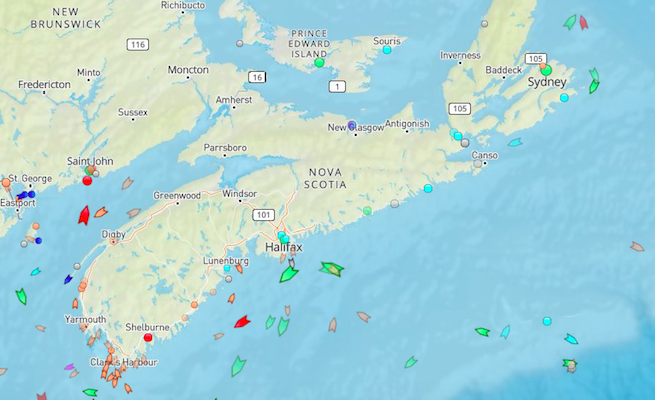 I fear I’m sounding like a broken record — ask your parents to explain that one, kids — but in order to keep up the kind of publishing schedule we’ve had of late, we need a continuing stream of new subscribers.