It’s a long weekend, so I’m essentially on Morning File vacation. I’ll be back next week with a “real” Morning File.

Also, since it’s a long weekend, there’s no news. I complained to one of the guys I often go to for my prison news that there was no news and I didn’t know what to write, and he said “Why don’t you just make some stories up?” And I said, “Like what?” And he thought a second and said, “Like, White Man Catches Toe in Escalator. That’s good because the moral of the story is always wear socks with sandals.”

So there you have some wisdom for the long weekend.

Here’s a round-up of some “Natal” Day links.

Here is Murphy Brown writing in Share News about the significance of August 1st for African Canadians:

On August 1, 2016 most cities in Ontario celebrate Simcoe Day in honour of John Graves Simcoe, who was the first lieutenant governor of Upper Canada. He served from 1791 to 1796.

The Civic Holiday in Simcoe’s honour is celebrated on the first Monday of August and it is also a public holiday in some provinces and territories. The Civic Holiday is not a statutory holiday and is known by various names in different provinces and municipalities. It is Regatta Day in Newfoundland, Saskatchewan Day in Saskatchewan, British Columbia Day in British Columbia, Natal Day in Nova Scotia and Prince Edward Island, Simcoe Day in Toronto, New Brunswick Day in New Brunswick, Colonel By Day in Ottawa, Heritage Day in Alberta and Joseph Brant Day in Burlington, Ontario. It is called Benjamin Vaughan Day in the City of Vaughan, Ontario.

Cooley was enslaved by United Empire Loyalist Sergeant Adam Vrooman who lived in Queenston, Upper Canada. Vrooman had purchased Cooley from Benjamin Hardison of Bertie Township (now Fort Erie, Ontario), a farmer, miller and member of the Legislative Assembly. On March 14, 1793, Vrooman was intent on selling Cooley to a buyer in New York and she was intent on resisting her sale. Cooley protested loudly and fought valiantly but she was violently bound by Vrooman and two other men – his brother, Isaac Vrooman; and one of the five sons of Loyalist, McGregory Van Every, a former member of Butler’s Rangers. Cooley was roped as if she was cattle, bound, thrown into a boat, transported across the Niagara River and sold to a new owner in New York State.

Cooley’s screams of angry resistance and the violence to which she was subjected by the three White men who bound and sold her were brought to the attention of Lieutenant Governor John Graves Simcoe by Peter Martin, a free African and former soldier in Butler’s Rangers and William Grisley, a White man who witnessed her struggle. Simcoe tried to abolish slavery after hearing of the unfortunate Ms. Cooley but was met with opposition in the House of Assembly because many of the members enslaved Africans.

Miles Howe with some Mi’kmaq history of St. Paul’s cemetery with a tie to Natal Day:

“Lewis Benjamin Paul, Mi’kmaw Grand Chief, was buried almost right here,” says Awalt, an environmental planner with a grandfather buried somewhere in St. Paul’s cemetery. “In the late 1970s, there used to be a tripod of stones here, marking his grave,” he says, searching the knoll for some long-gone sign of recognition…

Bonnie Murphy, the cemetery administrator for the Halifax Regional Municipality (HRM), looks on, clutching a rolled-up surveyors’ map of St. Paul’s. We unspread the map, but it gives no hint of Paul’s final resting place. Paul, the great leader, upon seeing his people driven to starvation by British colonization, famously wrote to Queen Victoria in 1841:

“I have seen upwards of a thousand Moons. When I was young I had plenty, now I am old, poor and sickly too. My people are poor. No Hunting Grounds, No Beaver, No Otter, No Nothing. Indians poor, poor forever, No Store, No Chest, No Clothes. All these woods once ours. Our Fathers possessed them all. Now we cannot cut a Tree to warm our Wigwam in Winter unless the White Man please.”…

…A marble tablet, which still stands at St. Paul’s, was erected during Natal Day ceremonies in Dartmouth in 1962. The tablet notes that “Hundreds of Indians and Two of Their Chiefs” are buried there – though it also says that, despite an ever-increasing number of Catholic dead in the 1800s, the cemetery was only used until 1865. (Awalt says this applies to “white” burials only, and that Mi’kmaq continued to use the area after this.)

The 1962 monument unveiling was also the occasion for an extensive clean-up of the property. A Dartmouth Free Press article notes that “20 truck loads of rubbish were carted away” before Father Michael Laba, of St. Paul’s Parish, had the area fenced in.

According to Kenneth Redmond, boyscout leader at St. Paul’s parish at the time, Father Laba also undertook an extensive mapping of the area, in order to determine exactly where the “Hundreds of Indians and Two of Their Chiefs” were buried. 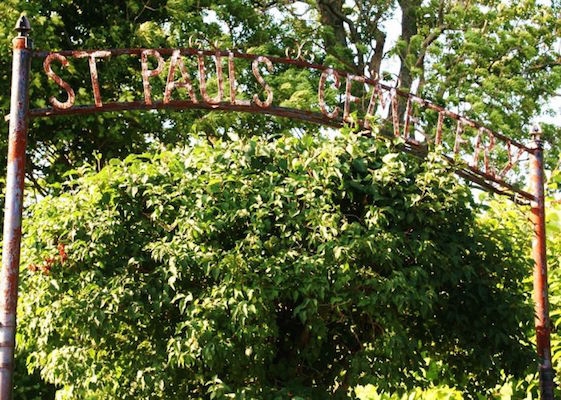 David Jones has a blog about the history of Dartmouth that has some  entries on the origins of Natal Day. From Dr. J.P. Martin’s accounts:

It is just 69 years ago that Dartmouth commenced the celebration of its Natal Day, and that date takes us back to Wednesday, August 7, 1895.

It was the year that construction work was being done on the branch railway from Windsor Junction to Dartmouth thus connecting the Town with the main line of the Intercolonial Railway by travelling overland instead of via the railway bridge which had been destroyed in 1893. The work was to be completed by the summer of 1895, but it did not get finished until 1896.

Early in 1895 a group of citizens who comprised the Chebucto Amateur Athletic Club commenced a campaign to celebrate the arrival of the first train from Windsor Junction by holding some sort of a celebration to mark such an outstanding event. So they conceived the idea of holding a regatta on Lake Banook along with evening fireworks and bang concerts.

Undeterred by the information in the spring of 1895 that railway construction was away behind schedule, the Chebucto members went right ahead with their plans for a summer holiday by canvassing citizens and shopkeepers for donations in the shape of cash or articles suitable for prizes in the aquatic events. Newspaper records of those days reveal that there were only two silver cups awarded, the rest of the prizes consisting of cuff links, walking canes, wall-mirrors, spoon oars and a few medals. 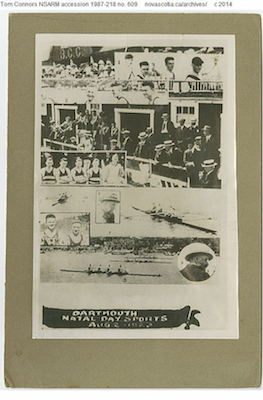 Seriously though, I was looking for information forever on whether this club was segregated, whether there were runners who weren’t white in the Natal Day road race and so forth, but I couldn’t find anything. Any historians who know the racist histories of Natal Day, please weigh in.

In its first half century, Halifax knew little but war; after the Battle of Waterloo in 1815 and Napoleon’s final defeat, Halifax would know only a century of peace. The British Empire spanned the world and Britannia ruled the waves. Haligonians felt themselves to be very much a part of this Empire and imperial sentiment could be seen displayed at every public event. Haligonians turned royal visits into gala occasions with torchlight processions, sporting events, mock battles and cavalcades through city streets. But the celebrations surrounding Queen Victoria’s Diamond Jubilee in June 1897 surpassed all such previous holiday events, lasting a full week. On the city’s Natal Day, 21 June, as part of these celebrations, the unveiling of the ‘Jubilee’ or ‘Nymph’ Fountain took place in the Public Gardens. In the photograph that graces the cover of Halifax and Its People / 1749-1999, we see a charming variety of faces of all ages, a classic photograph of its time. 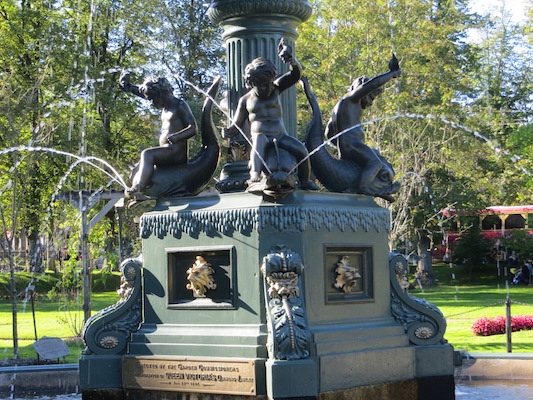 For the nerds among you, Beverley A. William’s M.A. Thesis, Leisure as Contested Terrain in Late Nineteenth Century Halifax argues that “during this era the birth, development, and shaping of various leisure pursuits involved power struggles between loosely defined groups at all levels on the social scale. Wealth and social prominence did not assure control. Reformers intent upon improving the morals of slum dwellers often failed In their attempts to “civilize” the masses through the regulation of leisure activities.”

By the time of Confederation there arose a cry for an orderly, democratic celebration of “the day the Brits came over” (Natal Day], marked on June 21st. A June 17th, 1867 editorial sarcastically emphasized the irony of calling this a “public holiday” and then falling to afford “legitimate recreation”. “The best joke of the season is considered to be that City Council has voted four hundred dollars for celebrating the holiday and has appointed a committee of its members to determine how to spend it. The aldermen have proposed an excursion In The Neptune with ‘a grand feed for themselves’”. The writer suggested that City Council cancel its excursion and hand over half the money to be used for the Union Engine Company to decorate its engines and have a noon-day display followed by a torch-light procession.”

Gross. Is this shit still in the Natal Day parade? I found this in a blog from 2010: 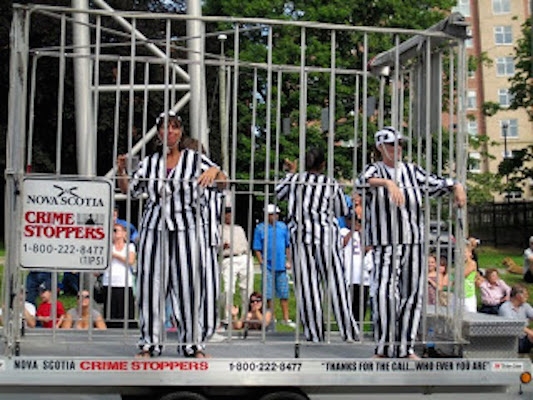 Hey, remember how they changed the parade route because people from North Preston were always coming out to Natal Day? That’s a thing Black people talk about.

Editor’s note: El Jones is an important and strong voice in the community, and we at the Examiner are proud to host her work every Saturday. To help us continue to provide Jones’ needed voice, please consider subscribing to the Examiner. Just $5 or $10 a month goes a long way. Or, consider making a one-time contribution via PayPal. Thanks much!