You are here: Home / Featured / Here’s when people can expect to get their first dose of vaccine in Nova Scotia 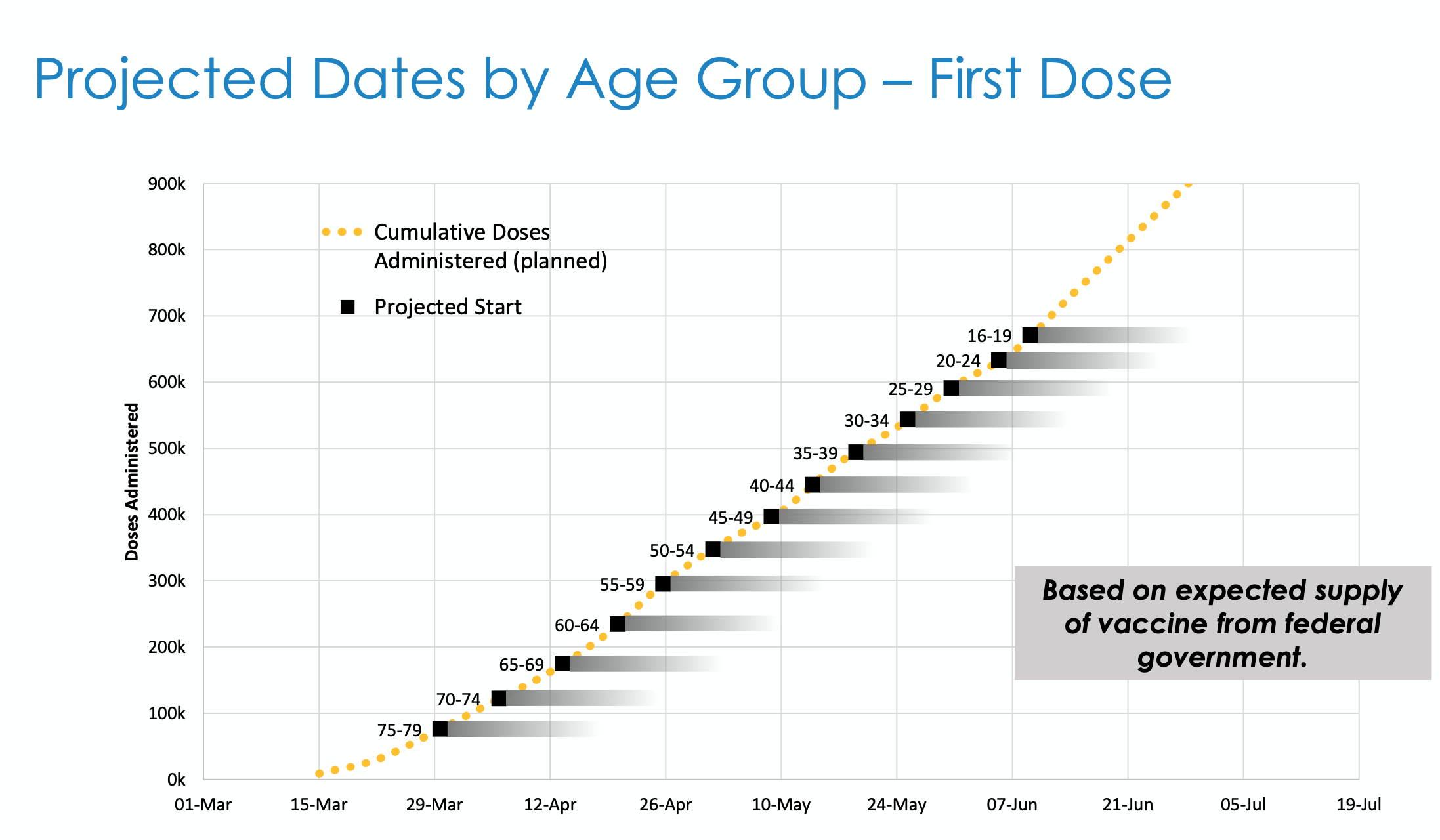 Seventy percent of adults in Nova Scotia should receive their first dose of COVID vaccine by around mid-May.

That information was related to reporters in a not-for-attribution technical briefing this morning. The briefing was called to update figures and plans because the federal government has given a better indication of the number of doses expected to arrive in Nova Scotia through the summer. Officials made clear that the projections are not exact beyond a two-week horizon, but the new numbers are considerably higher than what the province expected in January.

In January, officials expected about 140,000 doses of vaccine by the end of March; that number is now over 200,000 — but, crucially, 80,000 of those doses are Pfizer vaccine to be delivered in the last week of March.

But the bulk of the increase in vaccines comes over the next three months:

The question is: Does Nova Scotia have the capacity to quickly deliver the increased doses that will arrive in the province? The officials insisted that there is that capacity.

The officials again fended off criticism that Nova Scotia is behind other provinces in vaccine rollout so far, using the following stats for doses received by end of day yesterday:

They pointed out that the strategy for holding back the second dose ended with those who booking vaccinations beginning March 8, but people who booked before that date will receive their second dose in the 21- to 28-day time frame, as promised. To call those people up and cancel their second dose appointments would be incredibly cruel. Regardless, all those held-back second doses will be administered by April 2, and so Nova Scotia’s percentages will start looking like other provinces.

They insist that all doses received one week will be delivered by the end of the following week. Vaccination bookings are scheduled only for the two-week window when vaccine is absolutely confirmed to be delivered to the province.

In the next few months, the capacity of clinics and the expected arrival of vaccine looks like this: 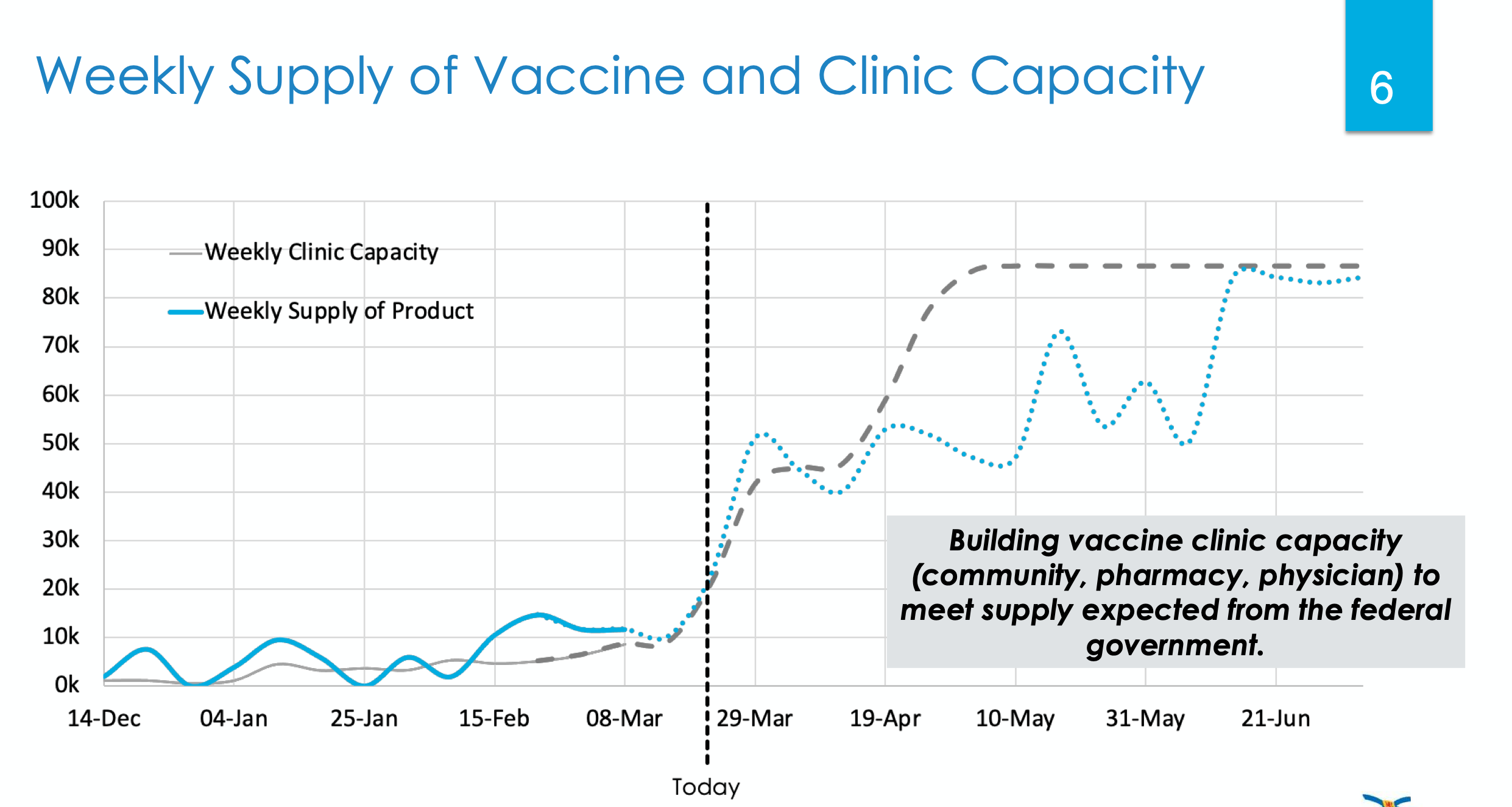 Where the blue vaccine line is above the brown capacity line in March, this reflects the large number of second doses held back. The blue line again exceeds the brown line this coming week, in that an unexpectedly large number of Pfizer vaccine is arriving. But capacity is expected to soon after quickly exceed supply until the two again match up in late June. That extra capacity gives the province the ability to handle larger amounts of vaccine, for example if the recently approved Johnson & Johnson vaccine gets distributed to Nova Scotia or should more-than-expected AstraZeneca doses arrive.

People in some areas of the province have faced long drives to get vaccinated, but officials say many pharmacies and doctors’ offices are coming into the distribution plan. Here’s a working map of those already approved: 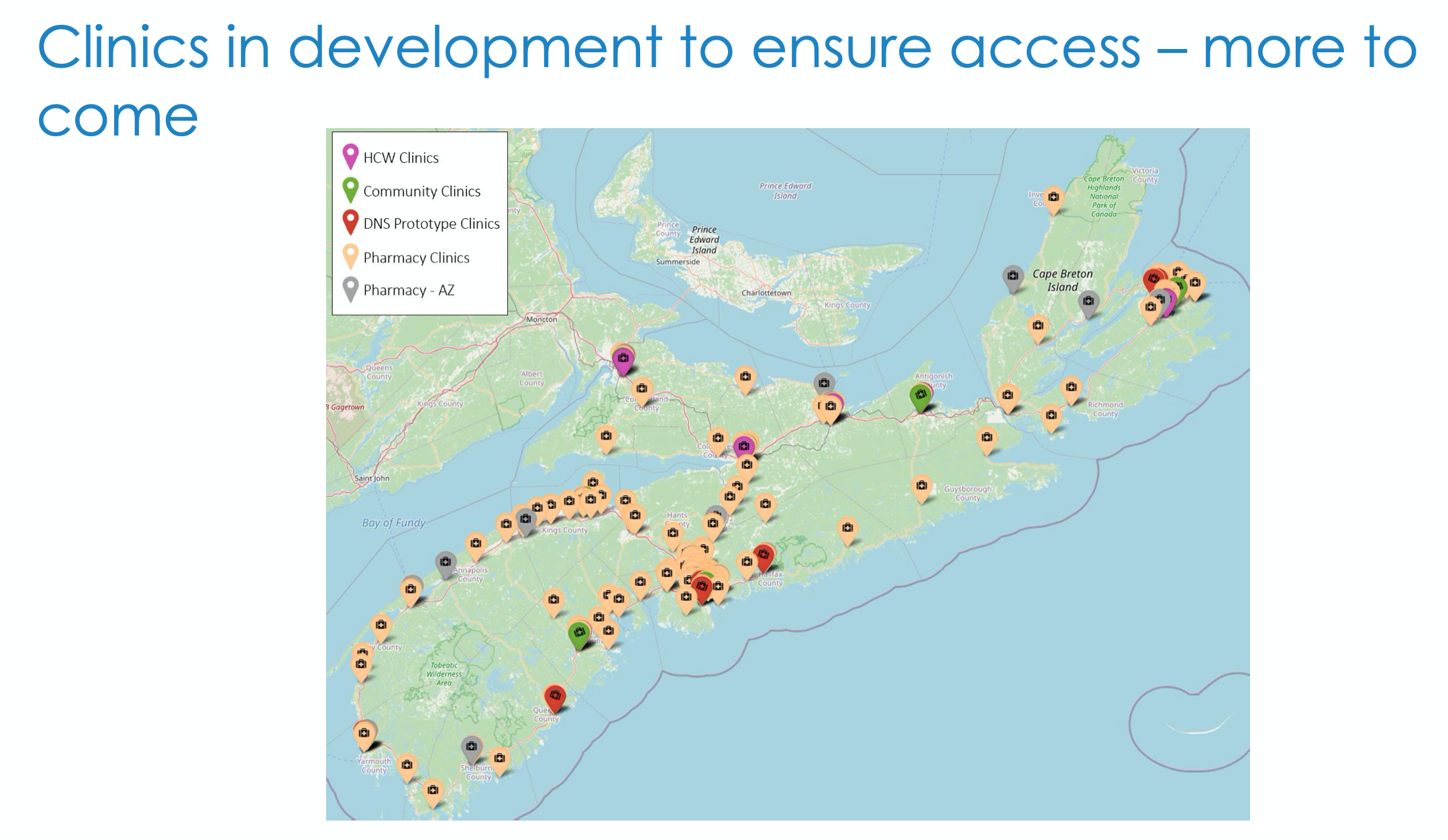 The officials said that public opinion polling in Nova Scotia shows that more than 75% of people say they want to get vaccinated.

Children are not calculated into the distribution plan because no vaccine is yet approved for anyone younger than 16. But vaccine trials are now being extended to children, and it is hoped that vaccines will be approved for children by about the time the province finishes giving adults the first dose.

When people make an appointment to be vaccinated, they will make two appointments: one for the first dose within two weeks, and one for the second dose 15-16 weeks later. People are encouraged to download the CanImmunize app so that a record of their vaccination can be placed right on their phones, but paper records will also be available at the vaccination sites.

So far, the Moderna vaccine has been mostly used in nursing homes as it’s easier to transport, while the Pfizer vaccine has been used in other clinics. But all nursing homes should soon be vaccinated, and much larger shipments of Moderna are coming in the next few weeks; this means that both Pfizer and Moderna will be at all clinics, but people won’t have a choice between the two — you’ll get what they give you.

One new case of COVID-19 is announced in Nova Scotia today (Tuesday, March 23).

The case is a man aged aged 40-59 who lives in the Sydney area; the case is related to travel outside Atlantic Canada.

There are 21 known active cases in the province. No one is in hospital with the disease.

People who are 80 or over can book a vaccine appointment here.

Here are the new daily cases and seven-day rolling average (today at 2.6) since the start of the second wave (Oct. 1):