You are here: Home / Featured / Here’s what the RCMP doesn’t want you to know about the mass murder investigation

Documents newly obtained by the Halifax Examiner related to the April 18/19 mass murder in Nova Scotia are so redacted by the Crown that they provide no new information. But they do provide some insight into the police investigation.

The Examiner joined with eight other media organizations to ask a judge to unseal search warrants related to the RCMP’s investigation into the murders. There are three different types of documents at issue. When police apply to the court for a search warrant, they submit an “Information to Obtain” (ITO), from which a Justice of the Peace or judge makes a decision as to whether to issue the warrant or not. Then, there is the search warrant itself, which allows police to conduct the search. Finally, there is a “Return” back to the court, listing what items, if any, were seized during the search.

Last week, the Examiner obtained the ITO attached to one of those warrants, and today we received the warrant itself — there was no Return for the warrant, as it involved the search for more human remains in Portapique, which apparently were not found.

The main narrative in that ITO is used in the other ITOs, albeit the ITOs are altered a bit to be more specific to each search warrant.

Another of the warrants is what’s known as a “production order,” in this case ordering Telus to turn over certain information. Telus has 30 business days to produce that information, and that time period has not yet elapsed; therefore there is not yet a Return for the production order.

Six additional warrants (four of which are production orders) have been executed, but the court has not yet scheduled a date to hear our application for those warrants. There are at least two other warrants that have not yet been executed.

Judge Halfpenny-MacQuarrie allowed for the release of the redacted documents for the sake of expediency, but the media organizations can, and might, challenge those redactions. On June 12, the federal and provincial Crowns are going to provide a table listing each paragraph in each document that has been redacted, and providing an explanation for the redaction. On that date, the judge will be given the same documents, but unredacted, and she has the power to release any or all them then and there. Alternatively, the media organizations’ lawyer, David Coles, may cross-examine RCMP and Canadian Border Security Agency agents who sign affidavits swearing to the reasons for the redactions; if so, that will happen some weeks from now.

It’s frustrating to get a set of redacted documents, but the redactions give an indication of what the RCMP and Crown don’t want the public to know.

For instance, the investigation of the gunman’s (we’re calling him GW) property included the search for something — we don’t know what it is because it’s redacted — that appears to be in the same category as “Firearms, ammunition, explosives, chemicals.” Likewise, specific to his property on Portland Street in Dartmouth, the documents note that “There is also information that [redacted].” It’s speculation, but it’s difficult to think of anything in the category of firearms, etc, or any information related to the Dartmouth property must be kept secret, unless it somehow links back to police.

Throughout the documents, the amount, kinds, and calibre of ammunition is redacted, which is simply perplexing. Why can’t we know that? It feels like secrecy simply for secrecy’s sake.

The data sought from the computers in GW’s cars is completely redacted. Likewise, the data sought from laptops, cellphones, and GPS equipment. While redacting the names of innocent people or even of people who are considered suspects in the murders would be appropriate, the blanket redaction of this information suggests something else is at play. Who’s being protected, and why?

The media organizations are teleconferencing with Coles later this week to consider next steps.

For now, the Examiner has summarized and linked to the six sets of documents below.

This is a warrant for the search of GW’s properties in Dartmouth (193 Portland Street) and Portapique (136 Orchard Beach Road, 200 Portapique Beach Road, and 287 Portapique Road).

This was a search for:

The grounds for the search of 193 Portland Street notes that “There is also information that [redacted],” explained RCMP Sergeant Angela Hawryluk.

For the Portapique properties, she requested, and received, seven full days (April 20 through April 26) to search the properties. Moreover, she noted that “two of the properties contain structures that are partially burned to the ground and could require the assistance of excavation related companies.” A “related assistance order” issued by Justice of the Peace Allison Rose allowed excavation companies to be on the sites, and required that they not disclose anything about the search.

The following items were seized at the Portland Street address:

At the 136 Portapique Beach property, some ammunition was seized, but the kind and amount of that ammo is redacted from the documents.

Several items were seized at the 200 Portapique Beach Road property, including an ammo box with a burnt $100 bill in it, a receipt book, some gun parts, and an ammo box with the contents redacted.

Nothing was seized at the third Portapique property.

This is a warrant for the search of the Atlantic Denture Clinic at 3542 Novalea Drive in Halifax. GW did not own the property, but rather leased it from a company called Novalea Holdings; someone with that company told Hawryluk that GW “frequented the location daily.”

The search was for the same items listed in the previous warrant, with the addition of:

This presumably refers to purchases at the decal company.

The property was searched on April 21. Nothing was seized.

This is a warrant specific to the two cars seized at GW’s Portland Street property — the 2013 Ford Taurus and the 2015 Mercedes — which had been taken to RCMP headquarters in Burnside. 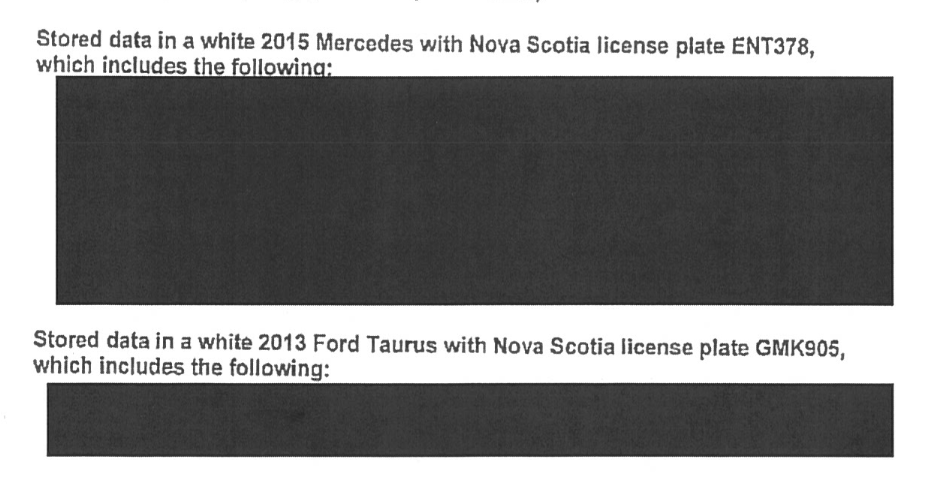 The search was for stored data in the cars’ computers, but the nature of that data is completely redacted from the documents obtained by the Examiner.

The data were collected, but again, the nature of that data is not relayed in the documents obtained by the Examiner.

This is a warrant to search the first four items on the list of things seized at GW’s properties, plus a Samsung cellphone, all of which were stored at RCPM headquarters in Burnside.

The cellphone appears to have belonged to GW’s girlfriend, as there’s reference in the documents to him using it the night the murder spree began.

What information the investigators were hoping to obtain from the devices is completely redacted in the documents obtained by the Examiner:

The search retrieved data from all five devices, but the nature of that data is redacted from the documents obtained by the Examiner:

This is a “production order” — an order to produce documents — to Telus, but which documents exactly is entirely redacted.

The production order was issued on April 24, and Telus has 30 business days to comply. There has yet to be a return to the court listing the documents produced.

The ITO associated with this warrant is the one obtained last week by the Examiner. The warrant itself is essentially the same search warrant that was issued for GW’s Portapique properties (first on the list above), but amended to allow for the search for human remains. As well, there is the “related assistance order” issued by Justice of the Peace Allison Rose that allowed excavation companies to be on the sites.