The federal government is holding a big press conference at 12:30pm today to “announce protection of more nature in Nova Scotia.” In order to learn the details of this announcement, you could register with Media Relations at Environment and Climate Change Canada and then show up at the Maskwa Aquatic Club on Kearney Lake and take notes.

Or, you could just keep reading this Morning File, skip the event, and save the gas.

The announcement appears to involve five land purchases completed on March 28. The five parcels are in two areas: four parcels were once the Barrett Lumber property north of Blue Mount Hill (near the Kingswood), and the fifth parcel is in Timberlea, which I believe was previously owned by one of the Armoyan companies.

To situate the sales, here are the general areas marked on a Google Map: 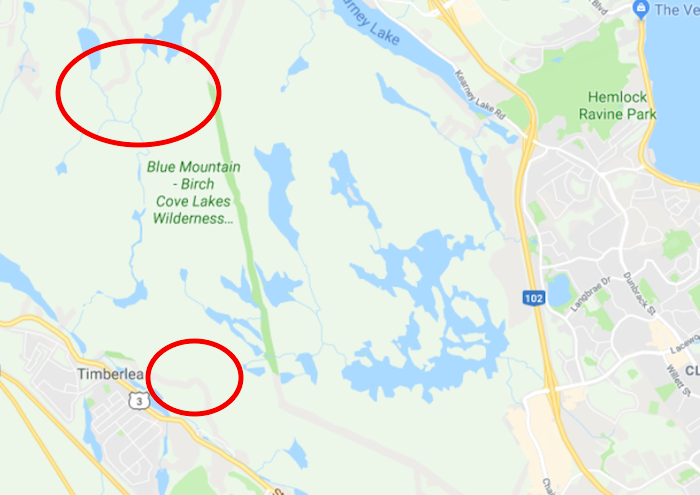 The parcels that were recently purchased are within the red circles. Map: Google Maps. Annotation: Halifax Examiner

The northern four parcels, totalling 193.5 acres, were all purchased in one sale, for $605,559 (or about $3,130/acre). The assessed value of the properties is $36,700. The logging road that hikers use at the start of their trek up to Blue Mountain goes through this area. The exact parcels are shown on the map below (the broad swath through the middle is the right-of-way for Highway 113, purchased many years ago): 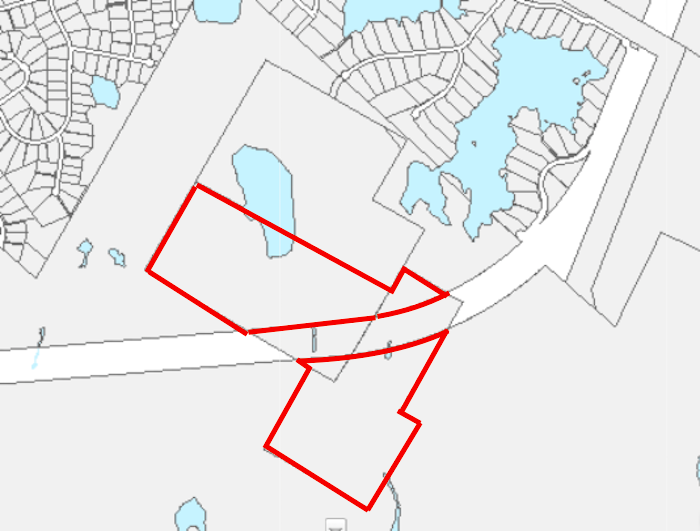 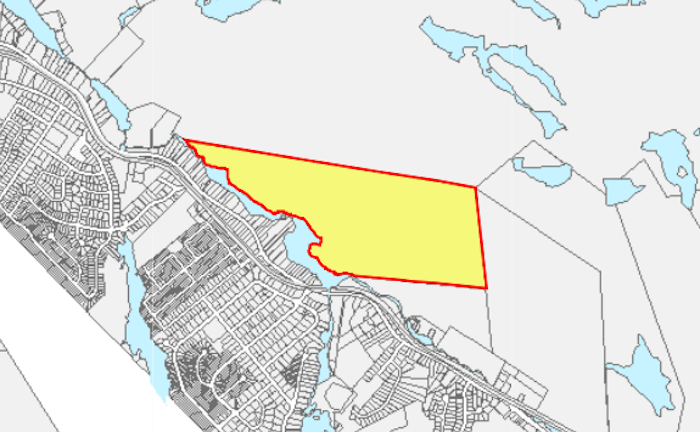 (The maps in this item are not to scale with each other.)

These are important land purchases. They’re a good step towards realizing the Birch Cove Lakes – Blue Mountain Wilderness Park. This is a wise and worthy expenditure by the federal government.

Moreover, much (although not all) of the land in both purchases is outside the originally envisioned boundaries of the wilderness park, as shown on this map (found here): 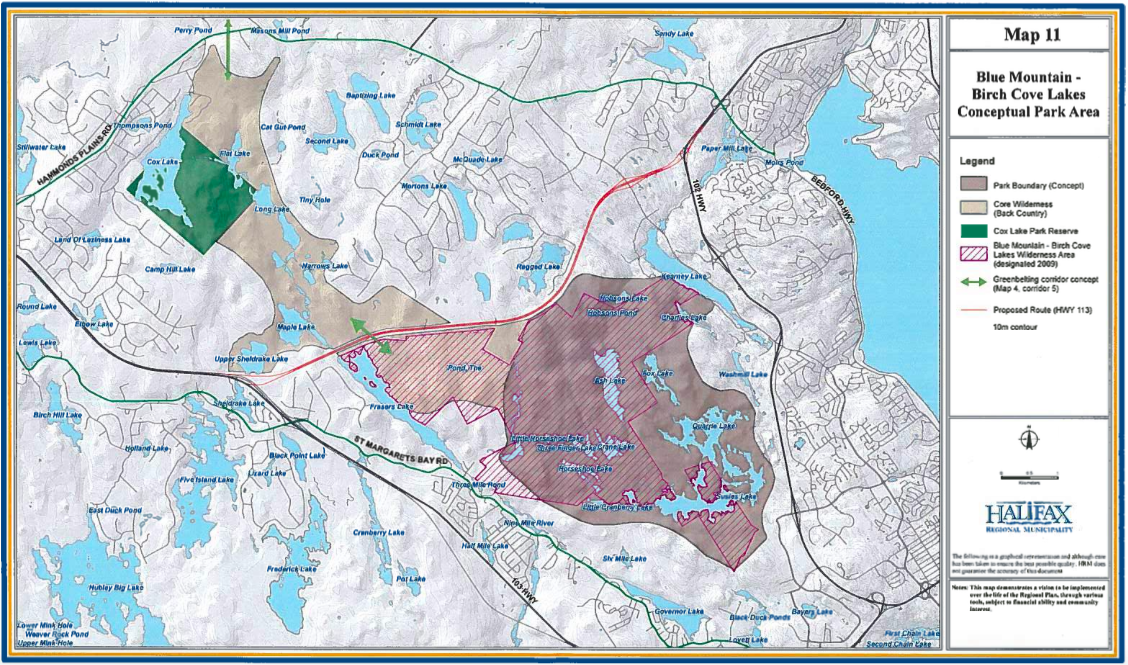 As the government has purchased land on both sides of the Highway 113 corridor, I’m hoping that reflects a tacit understanding that the highway will never be built. If so, this is welcome news; it does no good to have a four-lane divided highway going right through a wilderness park.

However, while the recent property purchases are important, they are not the crown jewels of the future wilderness park. The heart of the park is the Birch Cove Lakes — a network of nine entirely undeveloped lakes that form a canoe loop.

Much of the Birch Cove Lakes area is crown land, but 1,308 acres surrounding and to the east of Quarry and Susies Lakes are owned by the Annapolis Group and the Stevens Group. The Annapolis Group is controlled by the Jodrey family, which has assets valued at about a half-billion dollars; the Stevens Group is the parent company of Gateway Materials Limited and Susie Lake Developments, both controlled by Scott Stevens of Dartmouth.

In total, the Annapolis Group owns 965 acres and the Stevens Group companies own 343 acres; that property is identifiable on this map (found here) as the non-hatched area around Quarry Lake: 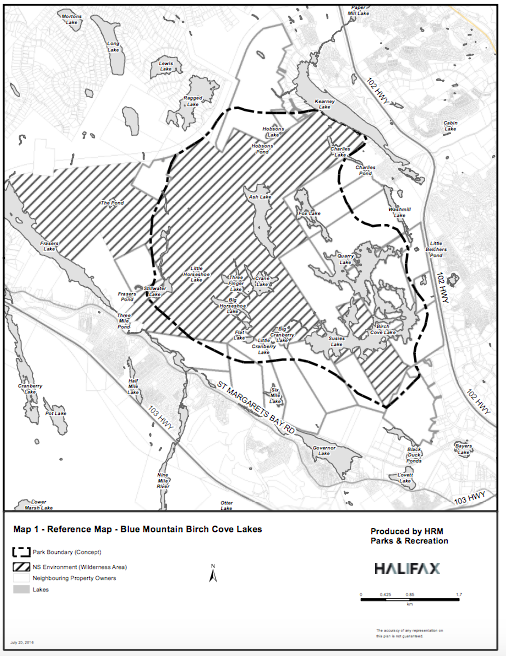 Almost all of the Stevens Group’s land (the closest to the BiHi) and 291 acres of the Annapolis Group’s land is zoned as Urban Settlement, which means that they could possibly (but not guaranteed) be developed within the lifetime of the 2006 Regional Plan’s 25-year planning horizon (that is, before 2031). The remainder, including 674 acres owned by the Annapolis Group, is zoned Urban Reserve, which means it would not even be considered for development before 2031, and even after that may not be considered.

The Annapolis Group is leading negotiations with the city for the sale of the land, and is playing hardball. Despite zoning that says most of the land cannot be developed before 2031, and maybe not even after that, Annapolis has put together a map and even a video of its proposed development of the property: 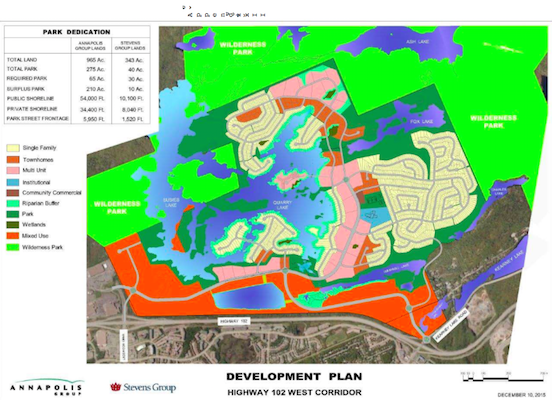 Compare this to the recent purchases that will be announced today. The Barrett Lumber land is zoned Open Space and Resource, which means it can never be developed, and was purchased for $3,130/acre. The Timberlea land is zoned Urban Reserve — the same zoning as the bulk of Annapolis’s land — and was purchased for $8,042/acre. Now Annapolis wants three-and-a-half times as much.

So perhaps besides being good purchases in and of themselves, the land buys to be announced today may be additionally good in that they set a lower baseline for establishing a price for the Annapolis land.

“The Nova Scotia Department of Environment has listed nine pages worth of missing information from Northern Pulp’s Environmental Assessment of a new wastewater treatment system to replace the 50-year-old one at Boat Harbour next to the Pictou landing First Nation,” reports Jennifer Henderson:

The Department of Environment says the information provided by the company in its Environmental Assessment this past January was “insufficient.”

Henderson details just what the Department of Environment was dissatisfied with — I was amused that the proposal called for running the new pipe under the shoulder of Highway 106, a detail I had previously missed and one that the Department of Transportation quite rightly refused to even consider.

The Environmental Assessment is so lacking that Henderson wonders if it was purposeful:

With the province requiring so much information  at this late date — nine months before the legislated closure date of the old Boat Harbour effluent treatment facility which the McNeil government announced more than four years ago — the larger question is why the company didn’t submit its Environmental Assessment much earlier if it intended to stay in business at Abercrombie, Pictou County. And why the information submitted was so incomplete if the company really expected the Department of Environment to approve a new effluent treatment system. 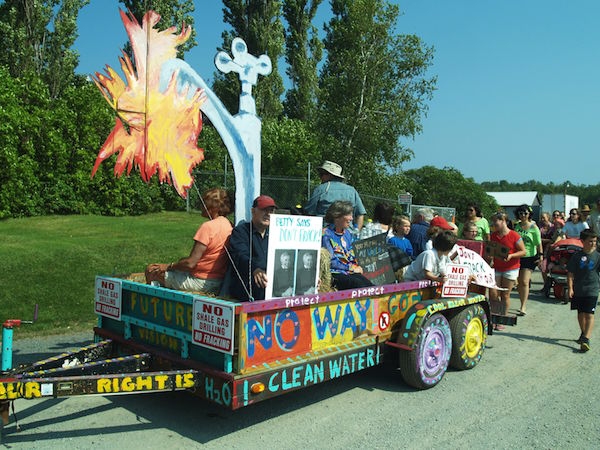 “Five years since Stephen McNeil’s Liberal government placed a moratorium on fracking in Nova Scotia, the Progressive Conservative party seems intent on putting it back on the agenda,” reports Joan Baxter:

In February this year, the two PC members of the Standing Committee on Natural Resources and Economic Development — MLAs Pat Dunn and Elizabeth Smith-McCrossin — proposed two topics for discussion in the monthly committee meetings. One is uranium exploration. The other is “shale gas development,” a euphemism for the controversial process of high pressure hydraulic fracturing — or fracking — to get at onshore natural gas deposits.

Both practices are currently banned in Nova Scotia, and NDP committee members argued they should not be discussed by the committee.

But with Liberal support, the PCs managed to get both onto the agenda for future meetings.

Click here to read “PCs put fracking back on the agenda.” 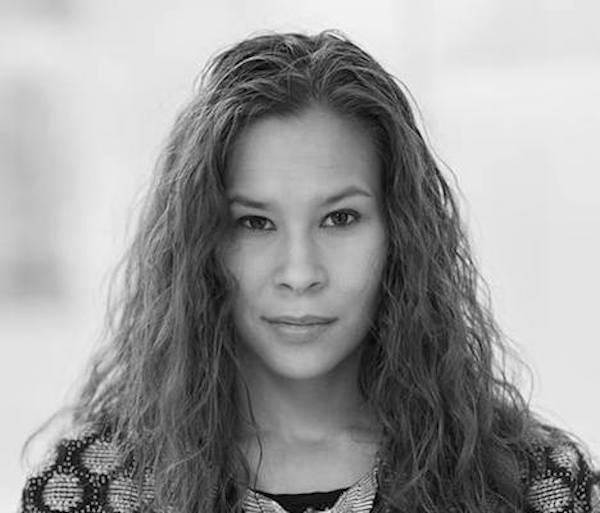 The Writers’ Trust of Canada has named El Jones one of this year’s five Rising Stars, which “recognizes talented authors in the early stages of their careers with $5,000 and highlights their work with an endorsement from a proven, influential author.”

Jones was endorsed by Leanne Betasamosake Simpson, who writes:

El Jones is a gifted orator with a gorgeous and moving command of the essentially Afrikan art form of spoken word, using it as a moving tool to affirm, critique, and burst open liberatory sound and space. In Live from the Afrikan Resistance!, she demonstrates that the power and energy of her spoken word also exists in print form as readers witness Jones lifting up and celebrating Black brilliance and resistance. Her political interventions and essays on topics such as abolition, police violence, and gender justice offer thoughtful, incisive, and world-building alternatives to make our shared worlds more just, and more kind. El Jones’ orature, poetry, political and personal essays and scholarship are gifts and should be on the reading lists and in the classrooms of every Canadian.

Community Design Advisory Committee (Wednesday, 11:30am, HEMDCC Meeting Space, Alderney Gate) — the committee is having its look at the Centre Plan.

Public Workshop on International Organisations and Digital Diplomacy: the EU, UN and NATO on Social Media (Wednesday, 9am, various locations) — from the listing:

This all-day workshop will feature more than a dozen speakers from international organisations and universities in Belgium, Canada, England, Germany and the US. A limited number of places are available for the public to attend some/all of the panels at no charge, although advance notice is required.

For more info and to register, contact this person.

Facility layout is a systematic functional arrangement of various departments in a manufacturing industry to facilitate movement of raw material, workers and equipment for optimum utilization of workforce and machinery. Triangle Kitchen is a leading Canadian manufacturer of high-quality cabinetry products and accessories. They have a classical workshop layout for manufacturing a wide range customized product with complex production processes for high volume production. Triangle is investing in new machinery to improve productivity and efficiency. A MILP approach was used to amend their existing facility layout to accommodate these machines considering historical as well as current data as a source for the model parameters. The MILP was able to locate the new machines while rearranging existing stations. The proposed solution utilizes space efficiently and makes the facility better organized.​

Thursday
10:30: Fram, cruise ship with up to 318 passengers, arrives at Pier 24 from Yarmouth, as part of an 11-day cruise from New York to Quebec City
20:00: Fram sails for Louisbourg

I’m taking the rest of the day off. See you tomorrow.