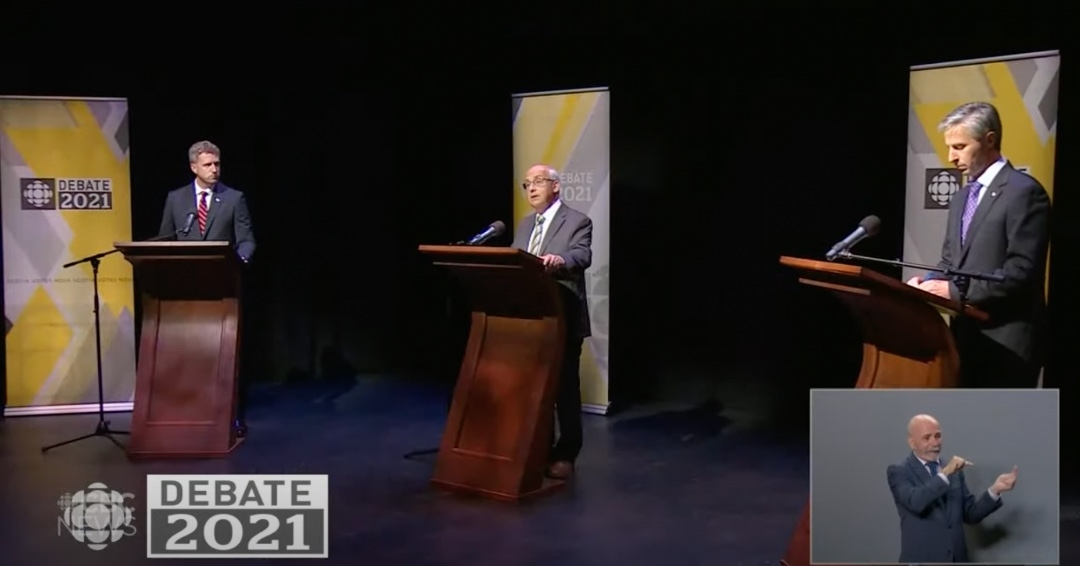 A screenshot from Wednesday’s leaders’ debate on CBC. Photo: Twitter

In case you missed it, here’s a recap of the 90-minute debate with leaders of Nova Scotia’s three main political parties televised on CBC last night.

“Fixing health care is job one for the Progressive Conservatives,” said a confident and combative Tim Houston. “It will cost money to fix the system and it won’t happen overnight, but the PCs will invest $400 million in our first year and we have been working on detailed solutions.” (As mentioned in the first Examiner article following the election call, “solutions” is the Tories’ campaign buzzword).

There are 70,000 people in the province who do not have a family doctor. Asked by CBC moderator Tom Murphy if it is realistic for all Nova Scotians to expect to have a family doctor, Premier Iain Rankin said the model of care has changed since Stephen McNeil made that promise during the 2013 election campaign.

“Nova Scotians deserve to see a doctor when and where they need to,” Rankin said. “Family doctors used to see 5,000 patients, but the model of care has changed to more collaborative care teams. That’s how new doctors want to practice and that’s why we have increased the number of nurse practitioners. Yes, the pandemic slowed recruitment, but there are 80 doctors waiting to come who should be here by fall.”

The Liberals’ biggest failure, charged NDP leader Gary Burrill, has been their handling of long-term care.

“In eight years, at a time of an unprecedented aging tsunami, they built a total of 57 new nursing home beds,” Burrill said.

If elected, Burrill committed an NDP government to improving staffing by legislating and funding staff-to-resident ratios to offer better care and attract people into those jobs.

PC leader Tim Houston called the 53 deaths at Northwood during the first wave of the pandemic “a stain on our generation.” The PCs are promising to provide 2,500 new rooms and hire up to 2,000 more long-term care workers.

Rankin said the Liberals are now in the process of building more nursing home capacity in Cape Breton and will tender 500 new beds for Halifax this fall. He challenged the PC expansion plans.

“We don’t need to overbuild because we need that capital in other areas of long-term care and health care,” replied Iain Rankin, who remained calm and cool despite sharp attacks from Houston throughout the evening. “To build 2500 beds when we have a waitlist of 1800 — and the time people spend in long-time care is on average three years — we are going to end up with empty rooms. The pandemic proved that this government will invest where and when required.”

“It is obvious that under the Liberals this situation was being ignored,” said the PC leader who referred to the Liberal leader as “Iain” throughout the entire 90 minutes. NDP leader Gary Burrill generally avoided personal attacks and delivered a performance worthy of a former United Church minister, despite occasionally veering off topic.

“I recognize my white privilege”, said 38-year-old Rankin, who noted his party has worked hard to set up a process to settle land claims in traditional African-Nova Scotian communities such as the Prestons, as well as to boost diversity in courtrooms by appointing more women and people of colour as judges.

That’s all true but it wasn’t long before PC leader Tim Houston went after Rankin himself, claiming the Liberal party used a “double standard” to green light the candidacy of a male (i.e. the premier) with a couple of impaired driving charges behind him while dropping a female candidate and business owner who had posed — legally — for boudoir photos displaying her tattoos.

“Your party forced a young lady to lie about the reason she was resigning from running as a candidate and forced her to further stigmatize mental health. That’s bad, that’s a disgrace actually,” scolded Tim Houston. “What do you say to that?”

“I’m proud of my record and we are going to continue to work on it,” said Rankin in what sounded like a well-rehearsed response. “I trust my staff and I am going to continue to try to reach out to that individual (Robyn Ingraham) while you try to make cheap political points during the debate.”

Houston pressed Rankin on whether the Liberal organizer who had pressured Ingraham was still working for the campaign. Rankin didn’t answer and added he had “reached out to Robyn three times” without success.

The Liberals would boost the economy by increasing spending on training programs to turn out more skilled tradespeople needed to build more housing and renewable energy projects. PC leader Tim Houston said with the cost of gas and food going up, what struggling Nova Scotians need is a better paycheque.

The PCs are promoting a policy that would give companies a choice between paying all the tax they owe the province or using half the amount to top up wages for their employees. The “better paycheque guarantee” is designed to put more money in people’s pockets and to swing undecided voters (about 24% of voters are in that category, according to pre-campaign polls) toward the Tories.

NDP Leader Gary Burrill suggested a better approach is to increase the minimum wage to $15 an hour. “Companies should pay their taxes to government, and they should also pay their people properly. They shouldn’t have to choose.”

The NDP would bring in permanent rent control; both the PC and Liberal leaders reject that and say they will build more housing to increase supply.

The Liberals have said they will bring in a balanced budget in four years’ time. The party does not dispute the NDP assertion that this will mean a $209 million cut to programs next year. Rankin says that’s doable when you consider the province spent $350 million this last year on COVID-related assistance to people and businesses.

“We spend when we need to spend but we need to ensure we take a balanced approach because we don’t have endless amounts of money, and I think that billion dollar deficits — with a capital ‘B’ — from both Opposition parties is just too much to burden future generations with,” Rankin countered.

NDP leader Gary Burrill called balancing the budget in four years “a bit of fiscal foolishness” that no other province is contemplating and would choke off any post-pandemic recovery.

“The Liberals get there by cutting health care,” warned PC Tim Houston.

Both the Liberal and NDP parties are committed to closing coal-fired power plants by 2030 and replacing fossil fuels with more wind, solar, and imported hydro. The PCs have noticeably not made that promise. Houston says their commitment to producing 80% of electricity from renewables by 2030 is “real and achievable.” It’s the same target chosen by the Liberals; the NDP are aiming for 90%. All parties acknowledge carbon taxes will increase and power rates are due to be reset next year.

The fireworks started when Burrill and Houston ganged up on Rankin over the Liberal government decision to secretly de-list the Owl’s Head Provincial Park* from a list of potential protected places in order for it to be developed as a golf course on the Eastern Shore.

“Why didn’t you reverse the decision when you had the chance?” asked Gary Burrill. “How can you call yourself an environmentalist and do what you did?” asked Tim Houston.

Iain Rankin said Owl’s Head “is still working through the process” and residents of Little Harbour came forward to ask the government to consider building a golf course. Rankin said it is important for politicians and the civil service to listen to all points of view and that Owl’s Head is not a done deal.

“I had an obligation to listen to that community,” said Rankin, who previously served as Environment Minister. “They are going through a process. If there is loud opposition and there is science that says it should not happen, then I will oppose it.”

All three leaders were asked if they support a new proposal by Northern Pulp to build a wastewater treatment plant that would pump treated effluent into Pictou Harbour. PC leader Tim Houston — who represents a Pictou County riding next door to the mill — sidestepped the question by saying it is up to government to set the bar or standard to evaluate the project and his opinion doesn’t matter.

The wastewater treatment plant will get the more rigorous Class 2 environmental assessment that Houston had pushed for on the first project. Rankin also declined to say whether he supports this new proposal. NDP leader Gary Burrill’s answer was blunt: “Northern Pulp should never be allowed to do to Pictou Harbour what they did to Boat Harbour.”

The deadline for nominations closed yesterday. The Liberals are running a full slate of 55 candidates. Lesley MacKay will carry the Liberal banner in Dartmouth South, replacing Robyn Ingraham.

If you will be out of town on Election Day August 17, you can cast your ballot at your local returning office starting now. Go to the Elections Nova Scotia website here to find out where your returning office is located. It is open every day except Sunday.

*The name of the park has been corrected since first publication. We regret the error.