A Dexter Construction crew building a sidewalk along Joseph Zatzman Drive in Burnside hit a four-inch natural gas line yesterday morning, leading to the evacuation of over 40 businesses. There have been 21 such leaks since 2009.

Is a botched Halifax police investigation being hidden behind a proposed publication ban? That’s the question I pose in an article written after sitting all day in a court hearing over a proposed publication ban related to a judicial review of the Glen Assoun murder conviction. This article is behind the Examiner’s pay wall and so available only to paid subscribers. To purchase a subscription, click here.

Auditor General Larry Munroe issued his report on non-emergency fire vehicles yesterday. Frankly, it’s a yawner. If this is the stuff we worry about nowadays, we’re doing OK.

Someone is sticking sewing needles in potatoes from PEI. “The six potatoes that contained sewing needles were found by consumers in Nova Scotia, New Brunswick and Newfoundland and Labrador. There are no reports of any injuries,” reports the Canadian Press. A police spokesperson said “the latest discovery of a tampered potato was made Tuesday by someone who purchased a bag of potatoes at a Co-op store in Fredericton on Oct. 6.”

5. We’re not all going to die after all

“No major weather expected in Nova Scotia from Hurricane Gonzalo” reads a News 95.7 headline. But over at CBC.ca we get a more dire head: “Hurricane Gonzalo will impact Nova Scotia and Newfoundland.” CBC, see, really wants some bad weather. You can almost hear it in the ceeb voice, when you read the accompanying article, which acknowledges, yea sure, the hurricane won’t come ashore here, but “there is still time for significant changes to both the track and strength of Gonzalo.” 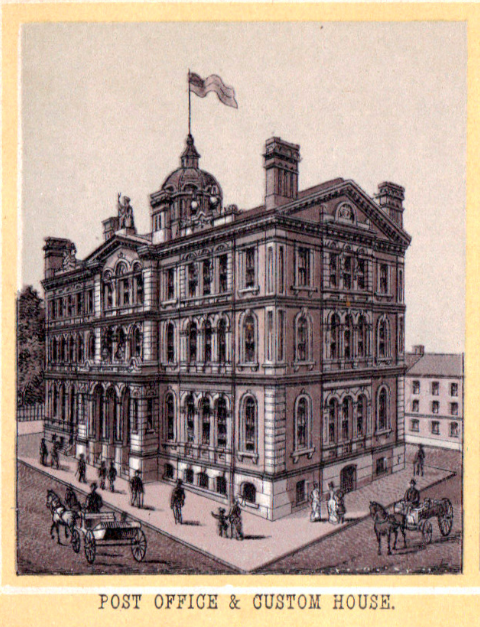 Stephen Archibald shows us some images of Halifax from an illustrated album produced in the 1880s. I’m struck that these are idealized views of the streets—there’s no blowing garbage, no horse pies in the street. But because they’re idealized views, they tell us a little bit about the sensibility of the times. The first thing that jumps out at me is that lots of young street trees were planted around the then-newish buildings. The sidewalks are nice and wide, filled with well-dressed pedestrians. In one illustration, the horse-drawn carriages pass each other on the left. And check out this hilarious (to my present-day eyes) view of George Street:

There are people walking in the road, and it looks like two are simply sitting in the middle of the street, looking up at the clock tower. One man stands near the gutter, hands in pockets, staring blankly at a lamp post. Two carriage drivers have stopped and pulled their vehicles sideways, apparently so people walking in the street can talk to the horses.

The Chronicle Herald walks both sides of the fence in its editorial about the Yarmouth ferry.

Hugo van Dun makes the trek from the Netherlands every year to volunteer at the Halifax Pop Explosion.

Brewing up Civilization: The History, Culture and Science of Beer (Friday, 4pm, Scotiabank Auditorium, Marion McCain Arts & Social Sciences Building)—Gordon McOuat will “take us through a survey of brewing science, culture and technology. He will talk about its history: beer’s arrival from Europe to the new world, the issue of prohibition and the rise of big beer in Canada.” Having sat through McOuat’s talks about beer, I can testify that they’re entertaining.

I threw together the following numbers yesterday:

Is Ebola bad? Yes, it’s horrible for the people who contract it, and it’s a real health concern for people in a few areas of Western Africa. And yes, we should extend what help we can to assist the governments in Liberia, Sierra Leone, and Guinea in containing the outbreak. Besides government-to-government assistance, individuals can donate directly to the cause, through Doctors Without Borders, which is doing excellent work in the field.

But let’s keep things in perspective. There will inevitably be a few cases of Ebola in North America, mostly involving people travelling from the highly-infected areas and the health care workers caring for them. But with reasonable precautions, there’s no reason why a first world country with a modern medical system like Canada should experience wide outbreaks of the disease. You have a much greater chance of dying from falling in your bathtub or walking across the street in Halifax than from Ebola.

We should help people in West Africa not out of misplaced fear for ourselves, but rather because we have empathy for other people facing a horrendous challenge. 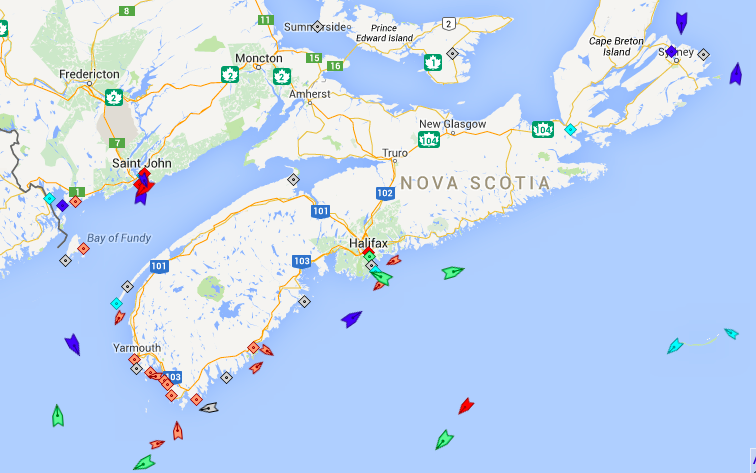 The seas around Nova Scotia, 6am Thursday.

East Coast was up until a few weeks ago operating as Nor’easter for Irving under a foreign flag. The ship was reflagged as a Canadian vessel due to increased domestic use, joining Acadian as Irving’s Canadian flagged tankers.

The Department of Community Services has put out a tender looking for 46,000 square feet of office space for its head office, currently located on Spring Garden Road. The tender lists three options for potential sites, with the first and preferable one being all 46,000 square feet at one location in the downtown core, which it defines as below Brunswick Street between Bishop and Brunswick Streets. Hmmm. What fancy new building might be going up in the area?

You’ll recall that the Human Rights Commission recently also issued a tender for new office space, with a lease for the new locale to begin on September 1, 2015. The HRC tender allowed for the possibility that new space may not be ready by that deadline, so allowed potential bidders to offer free temporary space for a few months before moving to the permanent space. The Community Services tender, however, does not include this proviso. The lease will begin on September 1, 2015, but additionally the site must be ready to occupy by August 15, 2015.