You are here: Home / Featured / “He was a psychopath” 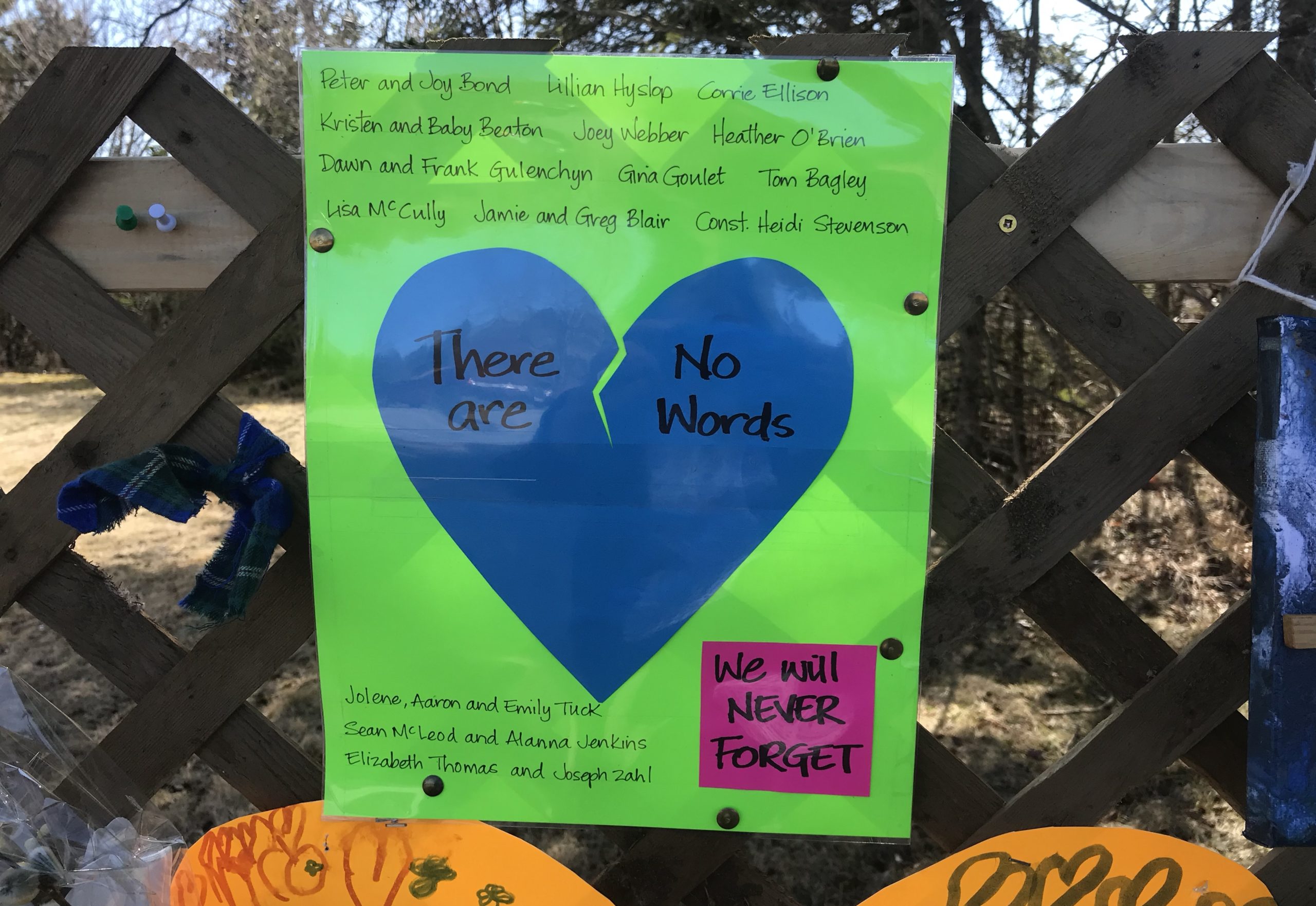 “That son of a bitch is dead.”

That was the first thing Boe thought when she heard on April 19 that the RCMP had killed a man who on gone on a murderous rampage across Nova Scotia, leaving 22 dead.

The murder spree started in the village of Portapique on the Minas Basin, where Boe had once lived.

Boe now lives in western Canada. She granted a telephone interview with the Halifax Examiner, but asked that we identify her only by her nickname, in part because she still fears for her safety. We’ve confirmed her identity and other details of her association with Portapique. We are identifying the gunman as “GW,” except in quotes when Boe identifies him by name.

Boe said that soon after she and her husband met GW when he first came to Portapique, they concluded that he was, in their estimation, a “psychopath.”

And it was because of GW that she and her husband eventually decided to sell their beautiful home in Portapique and move to Halifax. But even there she didn’t feel safe.

“I knew he was looking for me,” she said. “And I was afraid if I go into a store in Halifax, and he showed up, what would I do?”

So after three years in Halifax, she and her husband packed up and moved west.

But the awful experience of GW has never left her. She says she has been interviewed many times by the RCMP Serious Incident Response Team since the mass shooting.

She also reached out to Linda MacDonald and Jeanne Sarson, two nurses in Truro whose self-funded campaign, Persons Against Non-State Torture, aims to combat the torture of women and girls that is driven by misogyny.

MacDonald and Sarson were signatories to a recent statement on the mass shooting by seven Nova Scotia feminists fighting femicide, calling for “an inquiry with a feminist analysis of the violence.”

Boe recounted to MacDonald and Sarson the history of her terrifying interactions with GW, and especially her extreme concern over the way he was able to get away with repeated abuse of his common-law spouse.

After Boe spoke with them, MacDonald asked her if she would share her story with the Halifax Examiner. She agreed.

It began, Boe said, around 2004, not long after GW bought a house in Portapique.

They weren’t even in that house for a year when [GW’s partner] ran over to my house one day saying that Gabriel was beating her up and she was scared. She wanted to hide somewhere because he had blocked her car with his truck so she couldn’t get out. But she managed to get away from the house.

Boe told the Examiner that after that she told some people what GW had done, but had trouble convincing everyone:

I’m going to say that about half of them said, “oh no, he’s such a nice guy, he would never do stuff like that,” and just pshawed me, basically.

She said that GW drank a lot, and often bought alcohol for others.

Boe said she learned GW had again physically abused his partner, this time on a piece of property he owned:

Boe said the assault was witnessed by one of GW’s relatives, who was a good friend of hers when he lived in Portapique and who is now in a long-term care facility, following a stroke. Two other men also watched it happen.

Boe said she and her husband know what weapons Canadians are allowed to own with a Firearms Acquisition Certificate, and that they knew GW’s were not legal. So she told the RCMP that, and then in their presence, she called GW’s relative and put him on speakerphone so the Mounties could hear him:

And I said, “Okay …  just chill. Just relax. Don’t worry about it.” I hung up and the RCMP basically said, “the only way that we can actually get the information on this and prove it … like for her being beaten and strangled and stuff like that. She has to say it.”  And there’s no way that she would do that. Gabriel had her under his thumb. And I mean, literally. If her family came over, he would be right beside her. So she wouldn’t say anything to them about what happened at all.

According to Boe, at some point, GW pressured his partner to sell her vehicle and to work for him at his denturist office. Boe said that GW would leave his partner working in the city, and come to Portapique in the company of other women. When Boe spoke with his partner about this, she then confronted GW. And that’s when it “got scary” for Boe:

…because he dragged her back up to our house. My husband was downstairs. I was upstairs. I had a little bit of the flu. So I was in bed. It was during the daytime. He pounded on the door. [My husband] opens it. And Gabriel starts screaming …

Boe said that when she heard the obscenities, she went downstairs and told him, in so many words, that she had merely been telling the truth to his partner. GW then “grabbed hold” of his partner and “dragged her back out.”

According to Boe, after that her husband had to go abroad for work and the situation got worse. When Boe came home from work, she would park her car and go inside.

And I noticed him [GW] coming up the road. He stopped his vehicle right in front of my house. He got out of the vehicle, stood there and stared at the house for a good half hour, scaring the shit out of me. And this happened about four days in a row.

When her husband returned home, she said she told him they had to move away from Portapique.

Boe has profound concerns about the well-being of GW’s partner, and believes that people should be aware of  “the hell that she lived through,” and what it’s like for a female to be assaulted constantly and to be controlled by a violent male partner. Boe hopes that she will be looked after and that there will something in the estate for her to “make sure she is set.”

I call them weapons of mass destruction. Those ones should not be allowed at all. The only people that use those type of weapons are people that are in the military. When you’re fighting in a war, that’s it, you do not use them anywhere else. They’re not used for hunting. They’re not. You should not be able to get them, period. And gun control, I think right now, because of what’s been happening — and it may get worse with those coronavirus stuff going on — this is my way of thinking: anybody that applies for an FAC* [Firearms Acquisition Certificate] should be psychologically tested first before they get an FAC, and have no criminal charges, no criminal past, nothing like that. It’s just wrong. They don’t do good enough background checks.

Military grade equipment should not be in the hands of civilians at all. And like even retired military guys. There is no reason to have access to any of those type of weapons. None. Because they’re meant to kill.

Boe said there were lots of red flags about GW:

When I made the first report to the RCMP, I wish they had acted on it. They would have found all his weapons. Because at that time, like he had already been charged with assault before. So there were big red flags going up there.

And she thinks red flag laws that would allow the police to seize weapons from anyone posing a risk to themselves or others would be good.

Right now, if somebody sees somebody assaulting somebody, beating somebody, whether it be a guy or a girl, whatever, and they report it, it should be actioned immediately. Not with the consent of the person that’s being beaten, whether it be a guy or girl. Same with weapons: if you know somebody’s got weapons or has purchased weapons from the States, they didn’t come from Canada, and they don’t have an FAC, that’s a big red flag there. Report them. And the RCMP or whoever is investigating should do it right away — like yesterday.

Boe also said she “really, really” feels for the RCMP, and imagines that they are also “going through hell,” given what they went through and that they also lost a “comrade,” Heidi Stevenson, in the mass shooting.

Her only regret is that they weren’t able to prevent the tragedy by seizing GW’s weapons. Said Boe:

And the one, the only thing that could have been handled differently, is when I reported at first and nothing was done.

* TheFirearms Acquisition Certificate was replaced by the Possession and Acquisition Licence in 1995. Boe was familiar with the older terminology.