Aren’t you glad I used this dry old picture of Central Nova Scotia Correctional Facility and not a picture of a shitbomb to start off your morning?

The story behind this:

According to inmates, the fire represents an protest by the inmates in solitary. This incident started when an inmate was sent down from Health Segregation where inmates suffering with mental health problems are placed. (Jacob Boon’s article in The Coast detailed the torture conditions of solitary confinement and its epidemic use in Nova Scotia) The other inmates in solitary protested his being in the hole and demanded he be sent back to health segregation. Cells were blocked up in protest (a process in which inmates cover the slots/windows, etc. in their cells, forcing guards to come around to remove the obstructions).

When the inmates were ignored, this set off a round of “shitbombing.” Some inmates have stated, “If you treat us like animals, we’ll act like animals.” Many of these inmates have been left in solitary confinement/lockdown ranges for months. It was during this protest that the mattress was set on fire. People began smearing feces on the cameras, etc. The guards attempted to place inmates on “mattress protocol” (removing the mattress from the cell during the day.) One inmate ran out into the hallway when the guards came to seize his mattress and was “screaming ‘I have a shitbomb,’ and spraying shit everywhere.” According to inmate sources, the hole currently is covered in shit, people are living without sheets, blankets or mattresses, and mentally ill inmates are “writing Satanic messages on the walls with shit.”

These conditions are inhumane for the inmates and also for the guards who are working in that environment — a direct result of overcrowding, backed-up courts, lack of services and programs, a lack of mental health treatment, etc. Only a small fraction of these violent incidents are reported. The reality of life in Burnside is worse than hell. See Phoenix’s account of what to expect from a stay in Burnside in his latest dispatch in the Halifax Media Co-op for an idea of what these inmates are enduring. 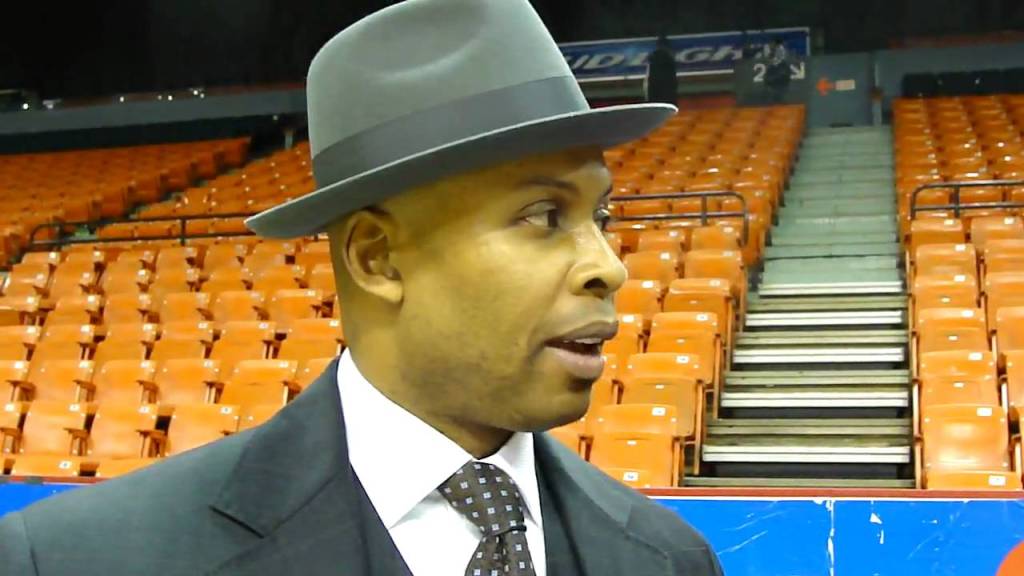 Old news: the racism on display in the comments.

Point 1:
I thought we were supposed to be teaching kids to walk away from a fight? Ironic that the NBL webpage prominently features a “Pledge to End Bullying,” but then players are condemned for not playing in a game when they feel threatened and fear further violence.
No doubt the same people who disproportionately convict Black men of violent crimes based on stereotypes of Black aggression are quick to scream “pussy” in the comments when those men avoid conflict…

Point 2:
Literally the first thing on the Halifax Mooseheads twitter page is a video called “Hit the Ice,” glorifying checks and fights. I guess male aggression is viewed differently in a white-coded sport.

Point 3:
This seems ironic in retrospect:

“We’ve got a lot of work ahead of us still and we’re just going to take our time and grow this thing slow like we’ve been doing. We’ve made some mistakes along the way and I’m sure we’ll make some more, but we want to definitely make sure that we’ll learn from our past.” – Andre Levingston

Now they done got rid of Levingston too.

Point 4:
Overlooked in all the handwringing about the fight and forfeiting the championship (don’t worry, Black people don’t get drunk en masse and riot downtown over sports championship losses…) 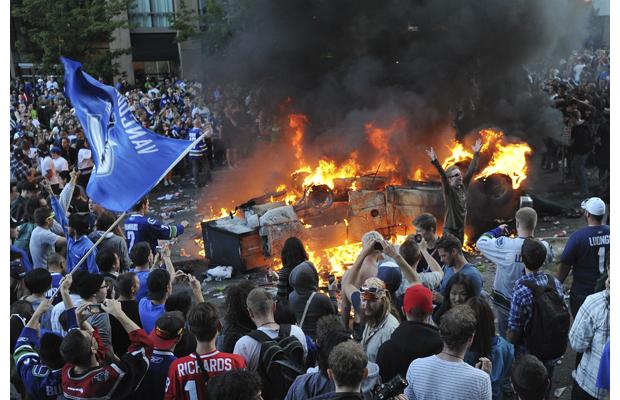 …is the news that the Rainmen are violating player contract rights to accommodation, seizing salaries to cover the fines against the rule stating fines must not exceed 10% of the players’ salaries, etc.

There’s a metaphor in here about Halifax and gentrification. The players are pushed out of the league and evicted in the name of “discipline,” the same logic of policing and “cleaning up the neighbourhood” that is used to force Black/low income people out of their communities. 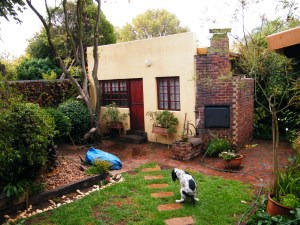 Not a picture of Africville, but the dog doing its business is representative.

In the context of the Baltimore uprising and Black resistance across America, the reading of this fight, Blackness, and white suppression and fear of Black violence is interesting. The editorial cartoon in the Chronicle Herald this weekend compares the situation to the Mayweather/Pacquiao fight but the rhetoric of thuggishness points us towards the ways in which, in Baltimore and elsewhere, Black bodies are seen as the perpetrators of violence, while state/organizational violence such as police brutality or forced evictions are normalized.  The reaction by the League suggests that anti-Blackness and the fears surrounding Black male bodies are not limited to the States as is common Canadian mythology.

(Language in this video, obviously.)

Also interesting is the role of Black entrepreneurship and respectability politics with teams with two Black owners promoting a Black-coded sport to largely white communities. Just as with hip hop, we see the league trying to negotiate questions of Black wealth and upward mobility against images of Black men as “thugs” and “animals” ( as quoted from the comments on the Metro article.)

Not a picture of violent thug: 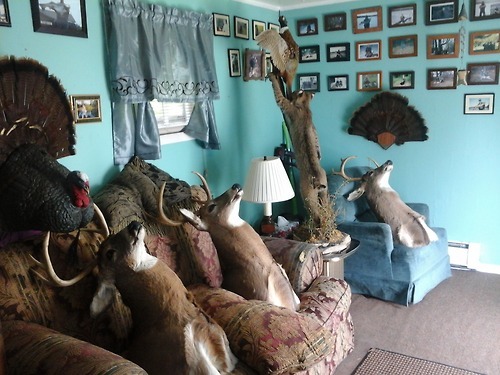 This could be your Sunday. Where are the moose heads?

Kate Middleton had a baby. Meanwhile, in Nova Scotia the 2015 budget freezes child benefits, ensuring an increase in child poverty. Don’t worry though, those children are mostly rural or racialized, so they’re not as important as a royal baby.
As the royal family shamelessly parades yet another descendant of slave traders and colonizers — this queen in her lifetime ruled over my mother and my own grandfather was charged with sedition against the Empire of her father for demanding liberation of the colonies, the Black Loyalist Centre  is set to open in June.

With the increased Book of Negroes-induced tourism, maybe we should think about twinning the highway by Shelburne so we don’t endanger tourists’ lives.

The historic environmental racism bill was introduced in the legislature last week by Lenore Zann due largely to the tremendous work by Dr. Ingrid Waldron, who still has not been given tenure by Dalhousie University. Maybe one day there will be a bill addressing racism and tenure in our universities.

“Dalhousie continues to pay its previous president a six-figure salary while its sitting one receives the same. I don’t suggest sustainability can be found solely in the compensation packages of senior administration, but if financial difficulties within an institution can void collective agreements that affect so many staff and faculty, why are senior administration positions not threatened with the same?” 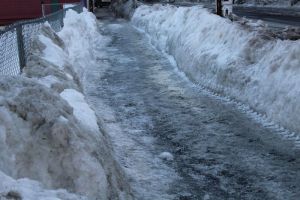 Aren’t you glad I used a picture of this icy sidewalk on Gottingen Street and not one of our current dog shit caked sidewalks to start off your Monday morning?

This is a sweet letter and some nice community spirit:

Grab a bag and pick up litter
I have noticed this spring, once the snow finally started to retreat, that so many of us must have decided the Earth was our trash bin over the long winter. I decided that this year I would start my own cleanup. I began about two weeks ago and the amount of trash I see each day is astounding. My husband and teenage daughter are now involved in our daily cleanup. We do this in our neighbourhood, around our workplaces, and outside of the places where we shop. We have even cleaned up a portion of a public parking lot.
The reason for this letter is to enlist the help of everyone in Nova Scotia, every citizen who can physically move and especially business owners. If every person collected one small bag of garbage (a Walmart or Sobeys bag — no need to go any bigger) on just one day, we could take a really big chunk out of the mess in our province. I have been hearing news reports that say that Nova Scotia is the dirtiest province in Canada — for the garbage that litters our highways and properties.

If each person could pick up the trash from their own yards and the road in front of their houses, there would be less garbage to blow around and more green to enjoy.
– Denise Mader, Beechville

My question is though, with the new laws on garbage bags, if we all went out and filled Sobeys bags with trash, wouldn’t they refuse to pick it up? Or we’d have to put the bag in another clear bag. Then someone else would have to go around picking up all the rejected bags of garbage which would be creating more curbside garbage, and then all we’d ever do is collect and re-collect each other’s garbage or something.

The Nova Scotia Barristers’ Society has launched an awareness and advocacy project/site addressing the experiences of marginalized people accessing justice.

Don’t forget to check out the Mayworks Festival, running from April 30-May 17.  The events listing is here:

ABOUT ME: I’m the Poet Laureate of Halifax for about two more months.  I teach at various universities when people will hire me.  Most important to me, you can listen on Mondays on CKDU 88.1FM at 5:30-7PM to hear Youth Now! Radio (part of the In My Own Voice programming.)  For the first half of the show, the men and women of Burnside call in to read poetry, rap, and talk with us.  Please listen. 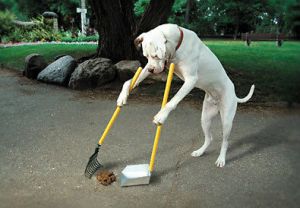 Hahaha, you didn’t think you’d get away without a picture of poop.  Happy Monday!

(That picture came up when I did an image search on the Examiner for “hockey fights.”  What is wrong with you, Tim Bousquet?)