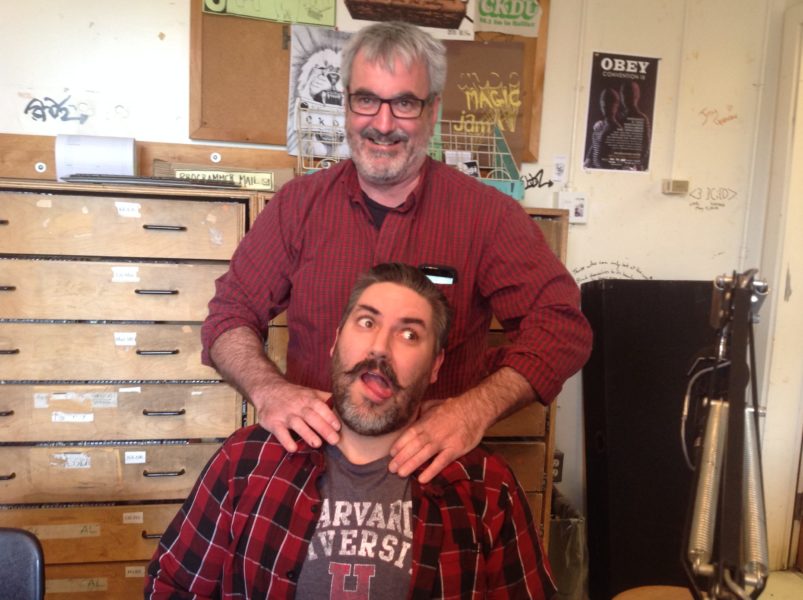 This week, local humourist Matt Brand learned that you shouldn’t poke fun at businesses with high-priced legal teams. By posting a satirical story on his website, Brand raised the ire of the Steele Auto Group, prompting them to send a sharply-worded letter to the writer and stay-at-home father

They then threatened to demolish his home and replace it with a parking lot purely out of spite.

Also, noted hater of history Waye Mason suggested maybe kinda sorta having a discussion about Edward Cornwallis, Halifax’s “founder.” Fortunately, the majority of city council recognized that nothing good has ever come from talking and wisely defeated his motion. And just a few scant blocks away, the statue of Cornwallis cried real tears.

Last Tuesday, Halifax council approved a three-year contract with Quebec-based Nova Bus Ltd for the purchase of up to 60 new 40-foot buses. (Constructing and delivering a bus takes more than a year, so council typically commits to multi-year contracts with the manufacturers.) Council also committed $16,900,996 towards the first 30 of those 60 buses.

In a previous contract, half of the new buses that arrived each year were replacing old buses that were scrapped and half were used to expand the fleet. But all the 30 buses purchased last week will be used as replacement buses, all but eliminating the older inaccessible high-floor buses still in the fleet. Halifax Transit won’t be fully accessible — there will be two remaining high-floor buses in the fleet (to be replaced in Year 3 of the contract), and there remain many inaccessible bus stops — but this is a vast improvement.

Yesterday, Federal Minister of Infrastructure and Communities Amarjeet Sohi was in town to announce $6 million in funding for 21 of the new buses.

One problem with Sunday announcements and writing a Monday Morning File before government offices open is I can’t make sense of the math. By my calculations, last week’s purchase agreement reflected a per-bus cost of $563,366. Twenty-one buses should therefore cost about $11.9 million, or nearly six million more than was announced yesterday. So I’m guessing that Sohi is committing to funding half the purchase price of 21 buses, with the other half coming from the municipality. The city will then pay for all the cost of the additional nine buses.

As I understand it, in practice the bulk of the money used to purchase new buses comes from gas tax revenues, so Sohi is committing to actually increasing the total amount of gas tax money coming to Halifax, ear-marking the extra money to be spent on buses.

Oh, speaking of buses, the real-time scheduling system goes live today. That means that now that no one much uses a phone to make an actual phone call, you can call 902-480-8000, punch in your bus stop number, and find out when your bus will arrive. Well, mostly. The system isn’t yet complete, so for some buses the system will give “scheduled” times as opposed to “expected” real times.

At this rate, by the 24th century we will have an actual web-based bus locator system. I can’t wait.

More seriously, Halifax council has spent significant money on the transit system in the past seven or eight years, and there has been a big improvement on the asset side of the system — new buses and ferries, new terminals, and rolling out this year and next new fare boxes and voice announcements of stops. This is all very good. I complain that the improvements haven’t come fast enough and rely too heavily on fare box revenue, but the fact is today’s system is vastly superior than the system that existed a decade ago. I say this as someone who has regularly taken the bus since I moved to Halifax in 2004.

Still, there’s been essentially no increase in ridership. Part of this reflects a political reluctance to overhaul routes and scheduling, but I think the bigger problem is attitudinal. A lot of people in Halifax simply think the bus is a hassle or beneath them. Even the mayor — who knows the system has improved — won’t make the occasional photo-op commute on the bus from his home into City Hall.

Save the letters. No matter how good it gets, the transit system will never be good enough for a lot of people; I understand that. But the system is now good enough for enough people living on major corridors that ridership should be higher than it is. Especially if you work downtown, I don’t see how the hassle and expense of parking is any less than the hassle and expense of taking the bus or ferry. 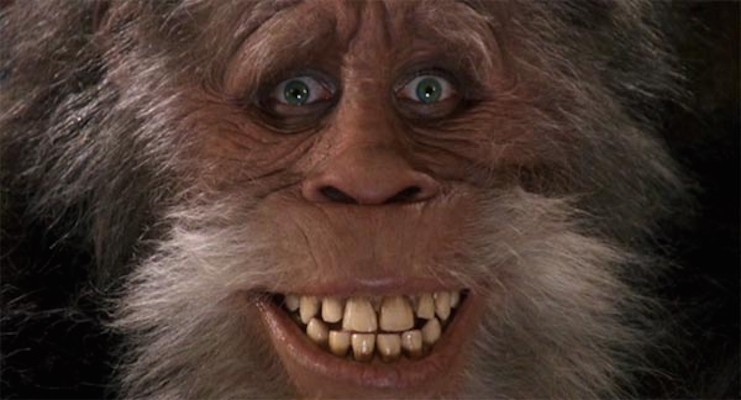 The TV series Bigfoot Town is being shot in Berwick, reports Shaina Luck for the CBC:

In the series, a small town’s mayor perpetuates a Sasquatch-sighting myth to try to bring in tourists and money. Now, art imitates life as people who live in the area hope the series will put Berwick on the map.

Berwick, alas, was already “on the map” for the horrific murder of Harley Lawrence. 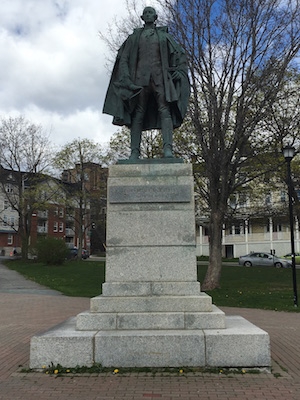 “I was as stumped as the next person to learn that city council rejected Halifax South Downtown councillor Waye Mason’s proposal to discuss if the name of Edward Cornwallis, our controversial founder, should remain on municipal landmarks,” writes John DeMont:

This, after all, was the same assembly that last year managed to summon the collective will to approve the donair as Halifax’s official food.

The truth is that he had blood on his hands before he arrived in the great harbour, known by the Mi’kmaq as Chebucto. In his book Cornwallis, the Violent Birth of Halifax, Jon Tattrie tells all about his role in the Battle of Culloden — the last gasp of the Jacobite revolt and the Scottish Highland way of life — in which Bonnie Prince Charlie and his bedraggled army met the redcoats at Inverness.

A thousand Jacobite soldiers died in less than 20 minutes on the moor that day. The leader of the English forces, William, the Duke of Cumberland, who would become known as Butcher for the atrocities that followed, ordered Cornwallis and James Wolfe, the conqueror of Montcalm on the Plains of Abraham, to hunt down the fleeing Highlanders.

With relish, Cornwallis followed orders directing his troops to murder, rape, burn and pillage all through the western Highlands.

One particular incident will leave you in despair for the human race: at one hamlet, Cornwallis sent his troops in to clear out the houses and assemble the Scots in the open fields.

The women were raped one by one in front of their bound husbands. Their rapists then hauled the women to their feet and held them there, helpless, as they shot and bayoneted every man and boy in the village. Then the women were dispatched too.

Andrew Aulenback tells me the slaughter of Scots played out in Halifax in 1931:

Too bad this issue wasn’t raised during the Scottish independence referendum.

Halifax Regional Council recognizes the significance of the undertaking of the Truth and Reconciliation Commission (TRC) with the release of the TRC’s final report and its recommendations. It took many decades of advocacy by residential school survivors to establish the Commission, and the several years of gathering testimony, evidence and developing recommendations have been a difficult and exhausting process for survivors and Commissioners alike.

We recognize the deep and lasting traumatic impact that Canada’s Indian Residential Schools had on individuals, their families, and communities both Aboriginal and non‐Aboriginal. The history of these schools is one of pain and gross injustice that requires us all to make ongoing and concerted efforts to learn the truth about residential schools, acknowledge this history and its modern legacies in our cities and begin a shared journey of reconciliation.

Many Aboriginal people now living in Canada’s largest cities continue to grapple with the most severe consequences of the intergenerational trauma caused by residential schools – but we are committed to supporting and delivering real change, working together with Aboriginal leaders.

Today we declare that we stand with Canada’s big city mayors and with the Federation of Canadian Municipalities, and commit ourselves to learning from the lessons of the Truth and Reconciliation Commission, and taking action to ensure the needs and aspirations of Aboriginal people are fully acknowledged in the great cities we seek to build.

We stand together today in committing to a new equal partnership with Aboriginal people in Canada; one based on truth, dignity, and mutual respect.

The irony is not lost on poet laureate Rebecca Thomas:

Executive Standing Committee (10am, City Hall) — Michael Karanicolas and Paul Conrod of Right to Know Coalition of Nova Scotia will present their report, “Transparency in HRM: Room for Improvement.” I’m going to attempt to be present, but 10am is really pushing it.

Accessibility Committee (4pm, City Hall) — no reports are posted on the agenda. 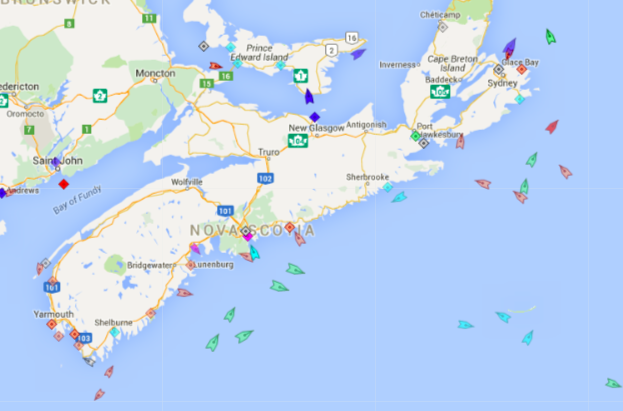 The seas around Nova Scotia, 9:10am Monday. Map: marinetraffic.com

I made progress on Part 5 of Dead Wrong yesterday.

Everywhere I go, people ask me, “When’s Part 5 coming out?” I’m honoured that people are anxious to read the next part, but you’ll just have to trust me: this is a shit load of work, with a thousand details, and after the research is the writing, which in some ways is even more demanding than the research.

Parts 1 through 3 took over a year to research and write, and Part 4 took a few months…

All of which is to say, yeah, Part 5 is coming. I have a private meeting to present on Dead Wrong in three weeks, and I’d like to publish Part 5 before then. That might actually happen. Please be patient.

Also, all of this takes work, time, and money. Please consider subscribing to the Examiner. Just $5 or $10 a month goes a long way. Or, consider making a one-time contribution via PayPal. Thanks much!