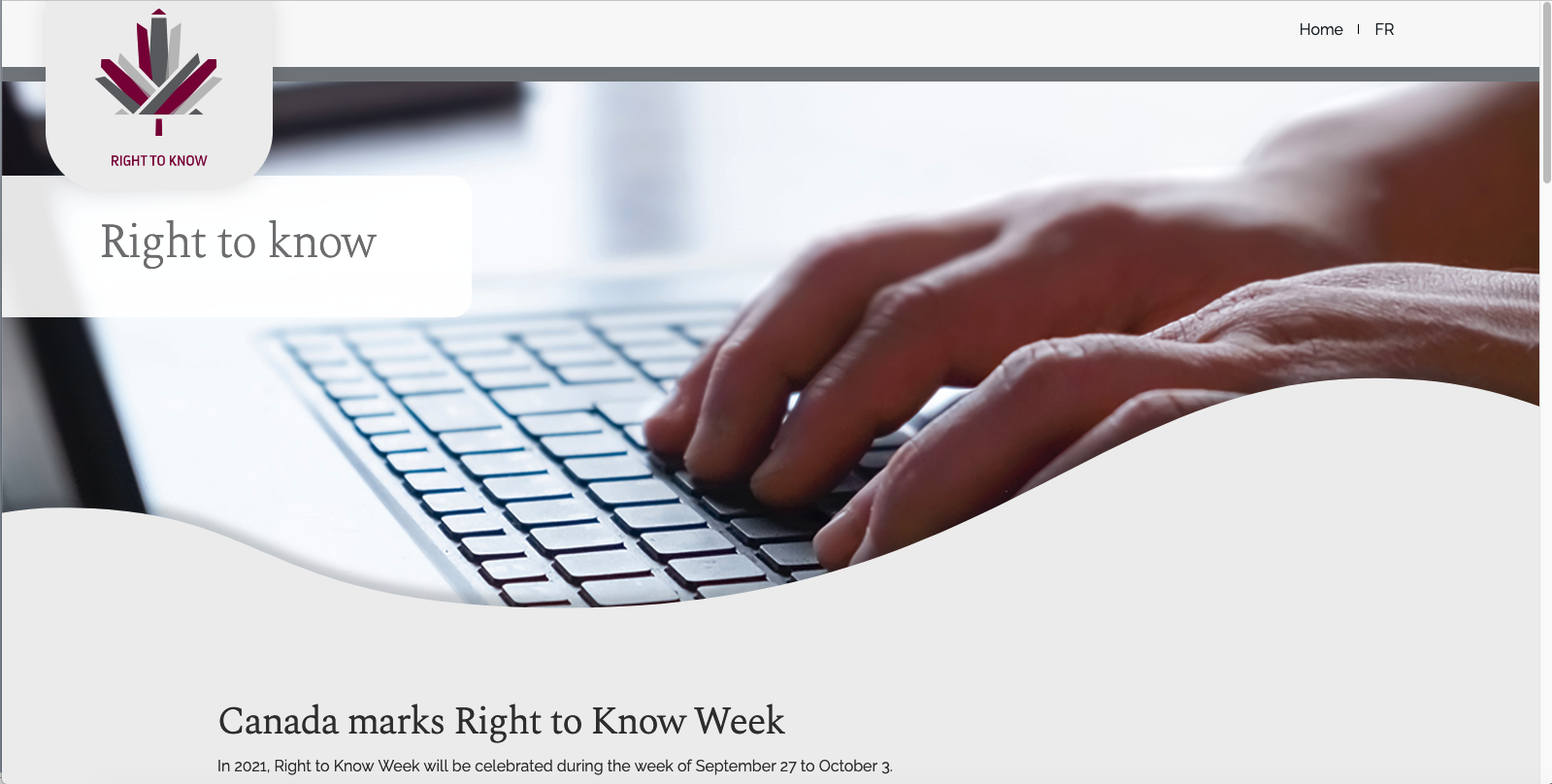 Last week, the Halifax Examiner delved into the current state of access to information in Nova Scotia in a two-part series — you can read part 1 here and part 2 here — in advance of “Right To Know Week,” which starts today in both the province and Canada.

The first article looked at how government redactions rendered nearly useless a $540 freedom of information (FOIPOP) request to Nova Scotia Environment and Climate Change to try to find out what had happened to a May 2020 application from the Municipality of the County of Colchester for protected status of the French River watershed, which would keep mining and mineral exploration out of the watershed that provides Tatamagouche with its water.

The second article looked at options available to those dissatisfied with a FOIPOP result, and how the province’s access to information ranks internationally — worse than Russia it turns out — and what could and should be done to improve the FOIPOP process and legislation.

That article ended with this postscript:

Lest these two articles give the impression that the federal government’s access to information is not also beset with problems, it may be worthwhile reading the recent account by Ian Young, Vancouver correspondent for the South China Post, about his own five-year wait for results from a crucial Access to Information (ATIP) request with the Canada Revenue Agency, and how a timely release of results that revealed vast amounts of fraud and money laundering in the Vancouver housing market might have helped curb the unaffordability crisis for people in that city. And also, on March 18 this year — six months ago — I submitted an ATIP to the federal government for information on Pieridae Energy’s request to Ottawa for federal financing for its proposed LNG plant in Goldboro, Nova Scotia. On Apr. 1, I received a letter saying that the Department of Finance Canada needed an additional 30 + 90 days to “comply with” my request. That meant I should have had the information on August 1. On Aug. 5, I wrote to ask for an update and was told the file would be sent to me by Aug. 16. On Sept. 13, I wrote again for news of the ATIP, and was told by the Senior ATIP Advisor that she “hoped to have it moving along” and sent out soon. No word since then. 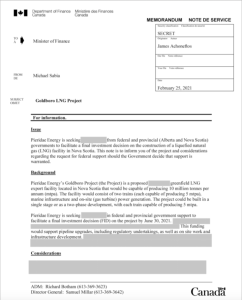 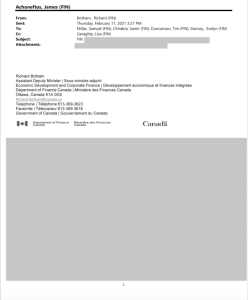 Of course, it came far too late to be of much use, almost six months after the access to information request was filed with the federal Department of Finance on March 18. At that time, Pieridae Energy was still meeting with the governments of Canada, Nova Scotia, and Alberta in its quest for about $1 billion government funding for its proposed liquefied natural gas (LNG) plant in Goldboro, Nova Scotia, as the Examiner reported here.

In fact, I had already submitted a FOIPOP to the Nova Scotia Department of Energy and Mines seeking information on a December 2020 meeting during which Pieridae Energy had made the request for government money. That resulted in a release package of 17 pages in May, nine pages of which were withheld, on which I reported here.

The federal ATIP release came nearly three months after Pieridae Energy CEO Alfred Sorensen announced that Pieridae had failed to meet the conditions for its final investment decision, and thus had decided to “move Goldboro LNG in a new direction,” because it was “impractical” to build the $10-billion plant as planned. In August 2021, Sorensen announced that one of the options being looked at was a “floating LNG Project,” without providing any details of where, or what that might entail. 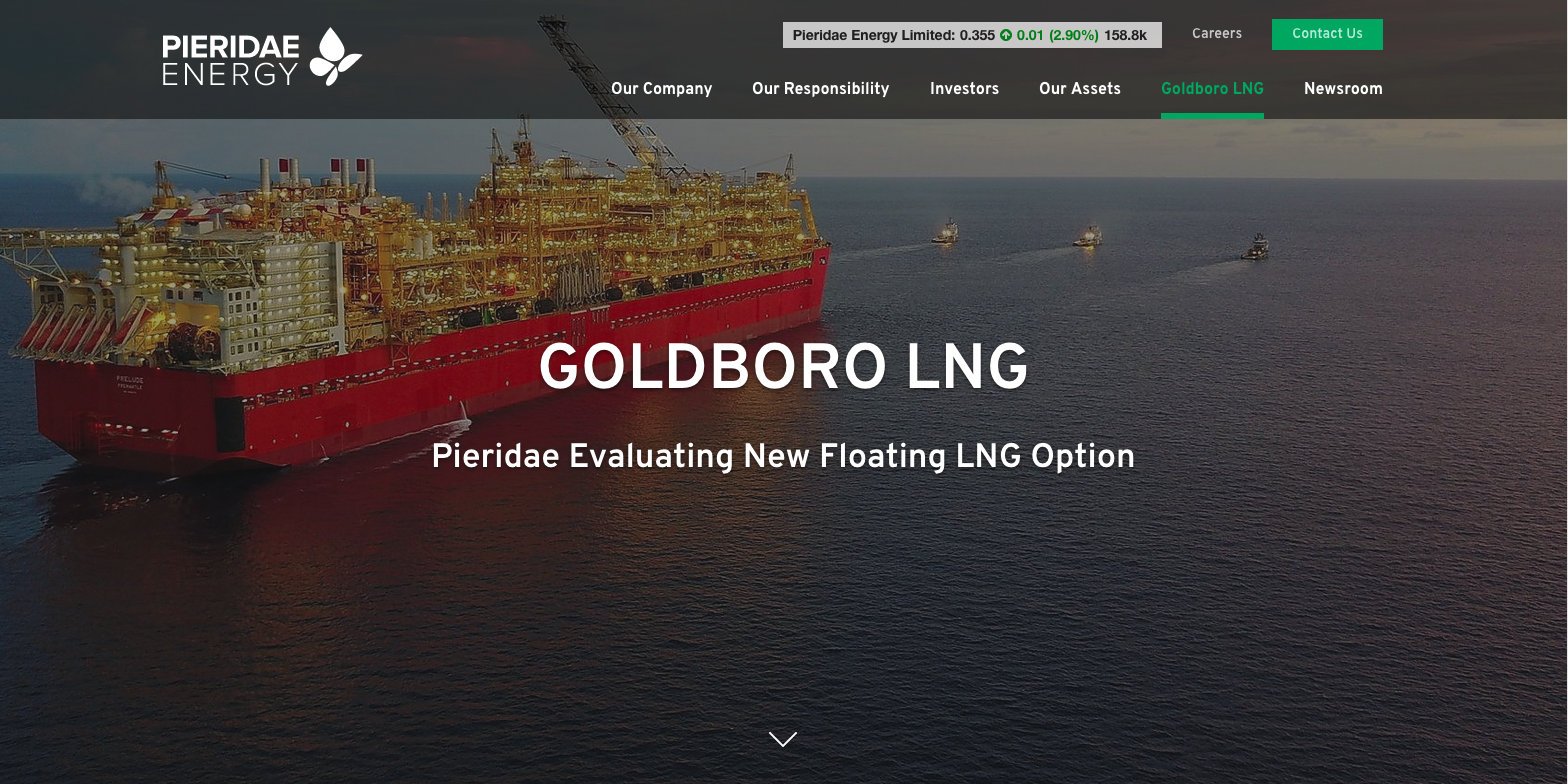 Not only is the ATIP release package now out of date, the information I did receive is also so heavily redacted, so much is “withheld,” that it offers almost nothing in the way of new information.

In fact, if it weren’t for the leaked PowerPoint that revealed Pieridae’s “ask” for nearly $1 billion, the public would still be in the dark about that request for government money.

However, a few snippets of information did make it past the government censors who withheld the contents of so many emails and memos in the ATIP.

Here are a few.

1. Pieridae was also after provincial money

A February 23, 2021 “briefing email” about the Pieridae Goldboro project from a policy analyst in the finance branch of the federal Department of Finance (FIN) to a colleague in FIN and Natural Resources Canada (NRACN), reveals that Pieridae was “requesting grants, repayable contributions and/or loan guarantees of REDACTED from provincial (Alberta, Nova Scotia) and federal governments.”

On March 17, FIN circulated a link to a story by CBC reporter Frances Willick, “Goldboro LNG project ‘would be difficult’ without federal funding, says Pieridae.”

On March 19, Humayun Soomro, a federal civil servant whose title is redacted but whose LinkedIn page describes as an Economist for Finance Canada, sent an email to FIN with a link to a CBC story, “Premier says Nova Scotia will not fund Goldboro LNG plant.”

If those articles evoked discussion in Ottawa, there is no sign of it in the emails released in the ATIP — at least the ones that are not redacted.

Technocrats in Ottawa seems to have blithely and repeated the eye-popping numbers that Pieridae provided about the project for jobs it would create and revenues it would generate. The FIN briefing email from February 23, 2021 states that the project would:

If any of the federal public servants working on the file questioned any of those figures, or came up with different estimates, there is no sign of it in the emails released through the ATIP (once again, at least not what remains of them after redactions).

On March 10, 2021, Ken Summers, of the Nova Scotia Fracking Resource and Action Coalition (NOFRAC), co-authored a letter to you and your officials regarding Pieridae’s Goldboro LNG project. This letter would like to correct the record and the misstatements of fact in that letter.

Sorensen continued for three and a half pages to rehash all the corporate spin about Pieridae and its Goldboro project that fills its website, press releases and presentations.

On March 30, Samir Chhabra, senior director in the energy and resources branch of federal finance department, wrote to colleagues in FIN and NRCAN:

This caught my eye: Pieridae plans to use fracked natural gas from Pennsylvania at its proposed LNG plant, and that’s a huge problem (halifaxexaminer.ca)

Any views, particularly on the statement from Germany?

Presumably, the statement he was referring to is the one that the German Ministry of Economic and Energy Affairs sent when the Examiner asked about Germany’s fracking ban in relation to the German government’s proposed plan to provide partial financing for the Goldboro plant. Bousquet quoted the question in his article:

Although there are moratoriums on hydraulic fracturing in Germany (and in Nova Scotia, where Goldboro is to be built), it appears that at least a portion of the LNG may come from fracked sources. Given these moratoriums, why would the German state provide loan guarantees for a company that will be sourcing fracked gas? Is this not a contradiction and betrayal of German public policy?

Instead of answering the question directly, the German Ministry for Economic Affairs and Energy provided this statement:

We can hereby confirm that we do know the respective Goldboro LNG project in Nova Scotia and that a Letter of Interest (LOI) has been issued by the German Government. This LOI is legally not binding and shall only express that the project can be considered as eligible under the assumption that certain criteria are met. An LOI can be issued to support a German offtaker [buyer of the LNG] in the bidding process.

Kindly note that a final and binding decision on whether an UFK can eventually be granted or not requires the prior assessment of the economic, technical and legal aspects in detail and the compliance with internationally accepted environmental, social and human rights standards. This assessment will be performed as part of the regular application procedure once a formal application has been filed.

We have asked Pieridae Energy to avoid ambiguous wordings in this context.

The response from a NRCAN colleague to Chhabra’s email about Bousquet’s Halifax Examiner article is completely redacted.

And that is just about all the new information I could glean from the documents released in the ATIP.

My ATIP request, submitted on March 18, asked for:

All communications (internal and external) and documentation (notes, memos, reports, presentations, lists of those attending any meetings) relating to the request from Pieridae Energy for financing for its proposed liquefied natural gas plant in Goldboro, Nova Scotia, including lobbying meetings and a meeting held in December 2020, and ongoing negotiations or discussions. Period to be covered is June 2020 to present, and released information in a searchable PDF file.

The ATIP release package, which arrived half a year after that request was made, is not searchable, and it certainly doesn’t include information “to present.” The most recent email in the package is from April 2, 2021.

What happened after that is anyone’s guess, or maybe worth another ATIP for anyone who doesn’t mind waiting a month or six for the results.

Happy “Right to Know Week,” everyone!