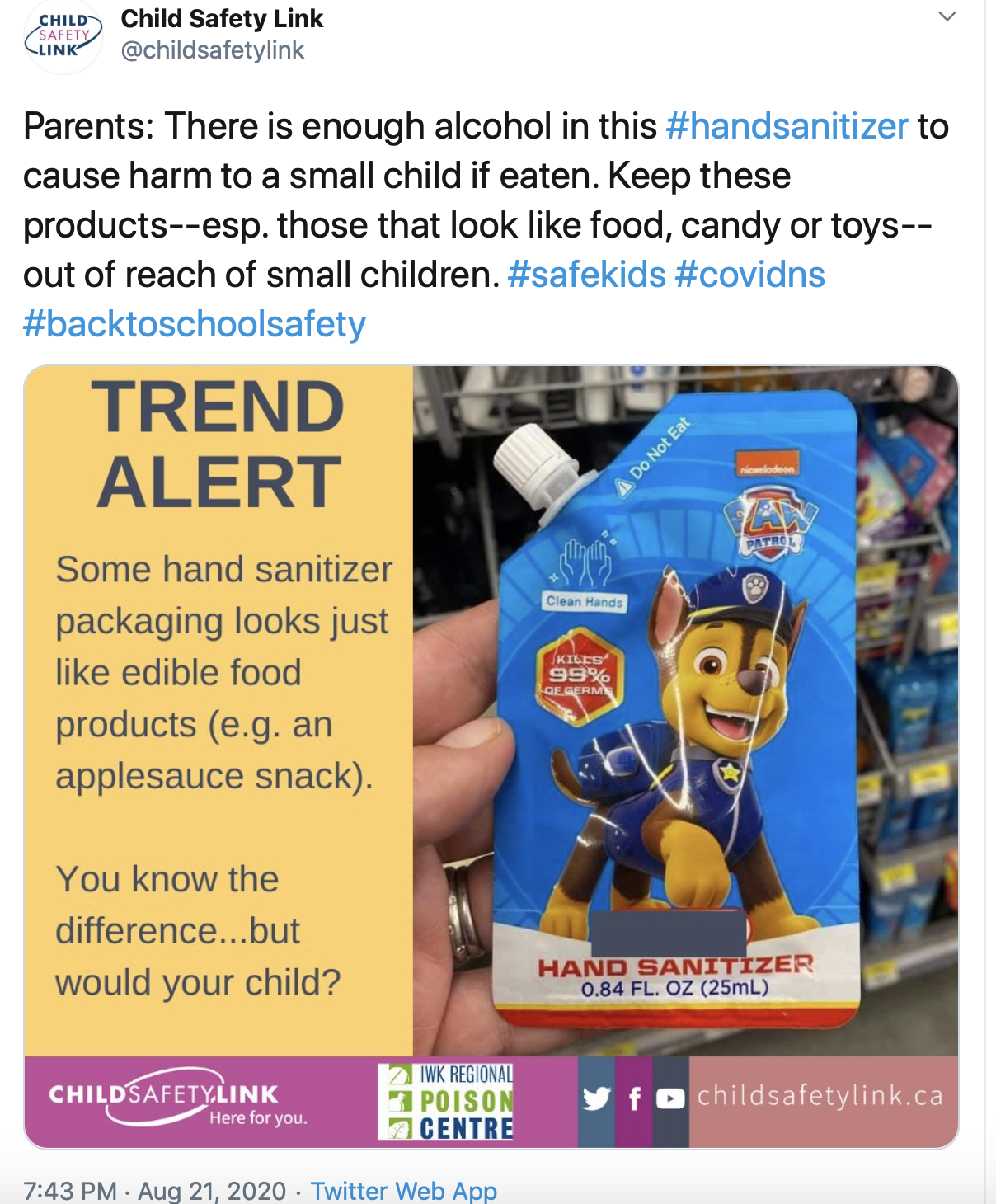 Child safety experts are warning parents about a hand sanitizer marketed to young children that looks remarkably similar to a food product.

Chantal Walsh, health promotion specialist with Child Safety Link, said in an interview Monday afternoon that the product first came to their attention late last week. A colleague who discovered this product was being sold in Ontario alerted them so they could inform the IWK Regional Poison Centre.

“It (accidental ingestion) can happen in a split second with a normal product, with a general product that’s just there, so something like this that looks so similar to something that children are used to being given and eating is just very alarming,” Walsh said.

“There is enough of a quantity in this particular package to harm a child, to cause serious toxicity and toxic effect.”

“There’s other variations of this same product with different characters and different people featured on them, so I know it could appeal to a mass variety of children,” Walsh said. “But definitely it is alarming to see something that is so similar in resemblance to something that is an edible product for children.”

Walsh said they’re advising parents not to send these kinds of hand sanitizer products with their children to school or daycare. She said despite the two written warnings on the package, she’s also concerned the product is specifically marketed to preschoolers, a group who aren’t typically advanced readers.

“It does say do not eat on the front, it says on the back keep out of reach of children, which is sort of ironic considering it’s a product that’s targeted for children,” she said.

“I’ve just been noticing as well the little cap on it is very small so it’s easy to remove for little hands in particular, but once it’s off it’s a potential choking hazard so it’s just something to be mindful of in that regard also.”

While Child Safety Link shared messaging about safe use of hand sanitizers around children before the pandemic, Walsh said COVID-19 has increased concerns around the use of such products.

As with any hand sanitizing product, she said it’s not necessarily the application of it that poses problems. Although they ask parents to ensure children avoid putting freshly hand sanitized fingers into their mouths, ingesting alcohol-based hand sanitizers in larger quantities is what can be toxic.

“We like to include that it’s not just about poisoning per se, but it can also be other symptoms of drowsiness, breathing problems, in younger children there can be an issue with low blood sugar,” Walsh explained.

“Certain symptoms…can be caused if they are to ingest a larger amount of that, of any hand sanitizer, so keeping it out of reach, using it while you’re supervising your child, never allowing them to just access and use it on their own is definitely something that we would recommend.”

Walsh said they’ve taken steps to “get the ball rolling” to see if this product can be removed from store shelves, something they’re highly recommending.

“It is something that we do feel should be removed sooner rather than later,” she said.

Parents and guardians are encouraged to contact the IWK Regional Poison Centre whenever in doubt. The centre is open 24/7.

Walsh said with so many uncertainties about school re-opening since the start of the pandemic, parents are looking for ways to ensure their children are as protected as possible. Although throwing a few of these fun, colourful hand sanitizer packages into a book bag or lunch box might be well-meaning, it could have unfortunate consequences.

“It’s one of those things that If we don’t talk about it and we don’t get the information out, there it could result in something more tragic or more negative so we’re looking to make sure parents are aware of what’s going on out there,” she said.

In response to Monday’s request for comment about their stocking and selling of this product, Walmart Canada sent an emailed statement to the Halifax Examiner on Tuesday morning.

“Thank you for bringing this to our attention. Product safety is a top priority at Walmart and we take concerns of this nature very seriously,” wrote Adam Grachnik, Walmart Canada’s director of corporate affairs. “While these products do meet Health Canada’s safety standards, we are currently reviewing the product internally.”