You are here: Home / Featured / Halifax woman says she was racially profiled by Wal-Mart employees who wrongfully accused her of theft, then beaten by police

Santina Rao was at the Walmart at the Halifax Shopping Centre on Wednesday when she was accused of stealing by store staff, assaulted by the police, and arrested. 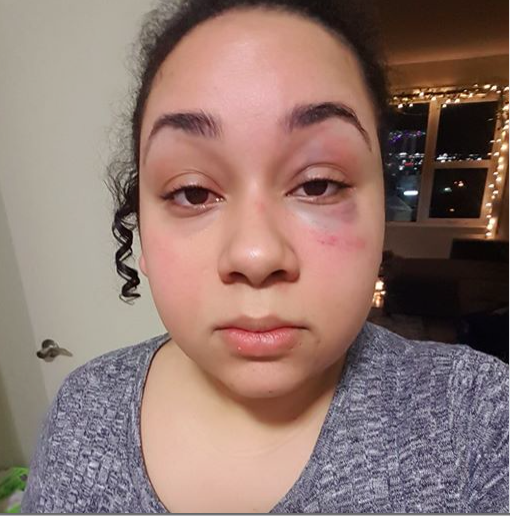 Rao was shopping with her two young children, age 3 and 15 months. She paid for $90 worth of items in the electronics department. The cashier told her she couldn’t pay for her produce in that department because it had to be weighed. On her way to the checkout, she placed the bag with her items on her stroller, and stopped in the toy aisle to buy her daughter a Barbie. She planned to pay for her purchases at the check-out before she left the store.

In the toy aisle, in front of her young children Rao was approached by three floor walkers and two police officers and accused of stealing items and concealing them. She says she offered them to search her bags and even the stroller. 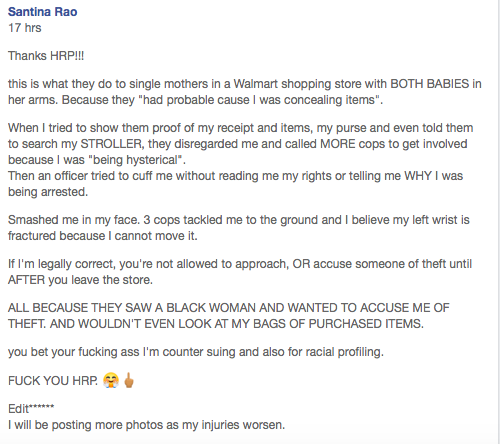 In the end, Rao said six cops were surrounding her.

The items Rao was accused of stealing were a head of lettuce, two lemons, and a grapefruit.

She never left the store.

A video of the incident shows Rao yelling and cursing at police telling them to get off her before they tackle her to the ground.

Rao tells the Examiner that this is not the first time she has been accused of stealing at that Walmart. One time she says she was stopped in the middle of the store, accused of stealing diapers, and then the worker refused to look at her receipt. She says they made her go to customer service, and after 20 minutes the worker there saw the diapers on the receipt and let her go.

Rao suffers from trauma from experiencing violence in her life, and she says that she let the officers know that she has PTSD. When the officers began grabbing her with her children watching, she explains she reacted out of terror. She alleges that as she became upset with her treatment by police and protested her innocence, she was told she was making herself look “worthless” in front of her daughter.

One officer tried to grab her child and pull her away. When Rao tried to protect her daughter, she says the police escalated the violence against her.

In Rao’s description, as the police assaulted her and grabbed her daughter, she scratched the face of one of the officers.

In pictures posted on Facebook, Rao has injuries to her face. Her neck is swollen and bruised where she says she was pinned down by an officer’s “boot, knee, and hands.” Her wrists are bruised from the handcuffs.

On the same Facebook post showing her injuries, Rao describes the officer putting on the handcuffs tightly and saying, “she’s a feisty fucking bitch, this one.”

A statement by the Halifax Regional Police indicates that after the police approached Rao for stealing, they attempted to arrest her for causing a disturbance. Rao has been charged with assaulting an officer:

At this time, we are not in a position to discuss specifics. However, we can confirm that at approximately 3:30 p.m. police received a report of a theft in-progress at the Walmart located at 6990 Mumford Road in Halifax. Officers approached a woman who was believed to have concealed items. She became verbally abusive and was behaving aggressively. The officers then attempted to place the woman under arrest for causing a disturbance. She resisted and assaulted one of the officers. The officer was taken to hospital for treatment and later released.

A 23-year-old Halifax woman has been charged with causing a disturbance, assaulting a peace officer and resisting arrest. She will appear in Halifax Provincial Court at a later date.

Notably, Rao was not charged with the alleged theft that began the incident in the first place.

Desmond Cole, whose forthcoming book The Skin We’re In chronicles activism in Canada against the police and state violence, points out that the police regularly charge victims of police brutality:

The moment that the police decided to respond to the situation, these charges that they end up laying on her had already been decided. It’s the police that confronted this woman with violence. They couldn’t lay a beating on her and then simply walk away, so the beating has to be her fault.

We have to remember that the police are taught to do these things. Whenever we talk about training, they are trained to scream out things like stop resisting arrest even though they’re the ones doing the beating; they’re trained to tell bystanders to stay back because they’re in danger from the person they’re brutalizing; they’re trained to go up to people in these scenarios and tell them it’s illegal to film and they’re going to confiscate the cameras; they’re literally trained to get away with brutalizing Black people.

So now, when this woman goes to the media and says I was beaten up by the police, her own criminal charges must be reported as the story. So now she will have to deal with those charges before she can address the issue of what the police did.

Rao says that both the police and the Walmart are responsible for what happened:

It falls back on them [the Walmart]. The cops weren’t just roaming around the store. Someone obviously was like, “oh, she must have items hidden in her stroller.”

I’m a single mom. My son is 15 months old. My daughter is 3. I can’t push a cart, shop, watch my 3 year old, push a stroller, and carry all of my stuff at the same time. I have to put the groceries somewhere while I’m shopping.

If I was going to steal something why would I go and pay for items beforehand?

Rao points out that she was beaten because she protested her innocence and was angry at being accused.

If I get angry at being accused and protest my innocence, I deserve to be beaten for causing a disturbance. But then people are in comments saying I deserve it because I was stealing, which I wasn’t. So no matter what I do, I’m guilty either way.

In 2016, Andrella David was racially profiled and accused of stealing at Sobeys. Sobeys was boycotted for months by the African Nova Scotian community led by the African United Baptist Association. The case raised the issue of consumer profiling in stores in Nova Scotia. Former Lieutenant Governor Mayann Francis spoke out against her own experience of being followed and accused while shopping.

A week ago, an Indigenous man in Vancouver and his 12 year old daughter were accused, arrested, and handcuffed at a BMO bank after an employee accused him of fraud.

In a statement released by the Halifax Regional Police, they accused the man of assaulting an officer. Like Rao, he is facing charges.

Rao says she is facing “a lot of backlash and hate” for speaking out about the violence she experienced from police, but she says she is not intimidated.

Note: This story has been updated to clarify the sequence of events in the store.