You are here: Home / Featured / Halifax man suspected of sexually abusing dozens of boys in the 1980s and 1990s

A Halifax man who has been convicted of sexually abusing three boys was sued yesterday by three other men who say they were also his victims. Another two alleged victims have already filed suit against the man, and an active police investigation is looking at the possibility he abused dozens of boys.

Michael Patrick McNutt, 64, lives in Halifax’s north end. In the 1970s and 1980s he was a math and science teacher at Sir Robert Borden Junior High in Dartmouth. He then briefly left teaching to work at a Wendy’s restaurant, but within a year or two returned as a substitute teacher at St. Joseph’s–Alexander MacKay and Westmount schools in north end Halifax, and possibly also at Graham Creighton Junior High School in Cherrybrook. He also coached hockey, baseball, and football teams. McNutt continued as a substitute teacher until 1994, when he pleaded guilty of sexually assaulting a male student in 1987. After that conviction, McNutt was employed for seven years at the KFC on Spring Garden Road, working his way up to a supervisor position. He has since retired.

Through the years, McNutt has faced 15 charges — six for sexual assault, five for sexual exploitation, two for gross indecency, and one each for invitation to sexual touching and an indecent act. He’s been sentenced for three of those charges — two sexual assaults and the indecent act, for which he received a conditional sentence of house arrest that expires on October 20, 2017. The other charges were either dropped entirely or withdrawn when police began to understand the scope of the allegations and formed an investigative team called “Project Apollo” to more fully investigate them.

The Halifax Examiner learned of Project Apollo earlier this year. As it is an active police investigation, we’ve agreed to withhold details of that investigation until charges are laid or the investigation is ended.

But we can tell you that police believe that there could be dozens of other victims, and that the alleged victims identified so far were aged eight to 15 years old at the time of the abuse.

The Halifax Examiner reached McNutt this morning by phone, but he declined comment. “I have no idea what you’re talking about,” he said politely, “and I don’t want to discuss this with the news.”

McNutt’s teaching years and a trail of alleged abuse

The lawsuits filed yesterday allege that many adults at the schools and in sporting organizations knew, or should have known, about McNutt’s improper relationships with children, but failed to act.

C.S.P. is suing McNutt and the Halifax Regional School Board. The school board, reads the suit, “had actual knowledge or ought to have known that Mr. McNutt was engaging in inappropriate behaviour and/or displayed pedophilic behaviours, and that he was unqualified or lacked the requisite character to be a teacher or hockey coach… they failed to investigate or report the behaviour or actions of Mr. McNutt.”

The Halifax Examiner asked the Halifax Regional School Board for comment, but has not yet received a response.

McNutt spoke with court officials and probation officers, but his accounts of his employment are inconsistent with each other and with the lawsuits filed by alleged victims.

In a pre-sentence report filed with the court in 2013, Probation Officer Greg Sullivan wrote that “McNutt disclosed that he left teaching in 1980 due to alcoholism.” The year is clearly wrong — other court documents viewed by the Examiner place McNutt’s departure several years later — but McNutt’s alcoholism is a recurring theme in the documents.

R.W.M. says in the suit that he went to Graham Creighton Junior High from 1985 to 1987 and McNutt was his teacher. McNutt sexually assaulted R.W.M., alleges the suit.

“Following the sexual assault, Mr. McNutt threatened the Plaintiff with physical and reputational harm to [R.W.M.] and his family,” reads the suit.

Moreover, R.W.M. says he reported the sexual assault to both the guidance counsellor and the principal at Graham Creighton, “but they refused to believe him and told him that he was lying.”

R.W.M.’s suit names McNutt and the Halifax Regional School Board as defendants. 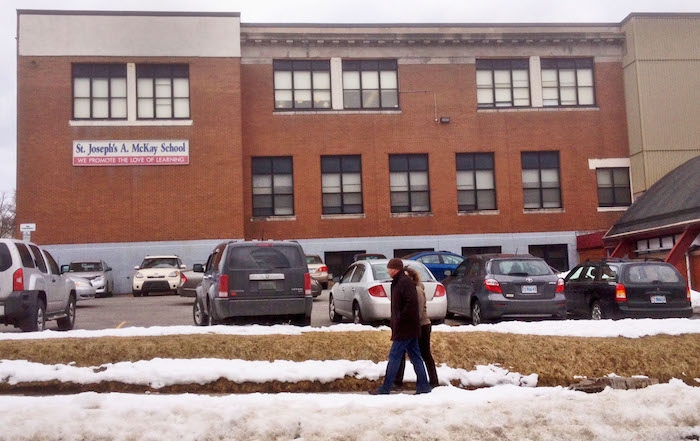 In that suit, C.S. says that in 1987 he was 13 years old, a member of the Halifax Bantam “C” baseball team, and a student at St. Joseph’s – A. McKay School. McNutt was his baseball coach and a substitute teacher at the school.

C.S. alleges that in April 1987 McNutt brought C.S. and another boy to “The Tubes” near Kearney Lake and provided them with alcohol. There, McNutt explained to the boys “how he used different types of massages to evaluate athletes’ readiness to play sports.” McNutt then massaged the boys.

Such massages were repeated both at Kearney Lake and at Chocolate Lake. Then, alleges the suit, in May 1987, McNutt took C.S. and “one or two other boys” to the Bicentennial Hotel, where he gave the boys cigarettes and alcohol.  McNutt told C.S. to “strip down to his underwear, and proceeded to rub his butt cheeks and genitals.”

After that first hotel incident, alleges C.S., McNutt would repeatedly bring him to the Bicentennial Hotel and the Mic Mac Motel in Dartmouth. On about 20 different occasions, alleges the suit, “McNutt instructed C.S. to strip naked, massaged him, and performed oral sex on him while other boys, who were approximately the same age as C.S., were in the same room.”

C.S. goes on to allege that as a substitute teacher, McNutt would have him stay for detention, where McNutt would perform oral sex on C.S.

C.S.’s lawsuit names McNutt and the Halifax Regional School Board as defendants.

What did hockey league officials know about McNutt?

As alleged in the third lawsuit filed yesterday, McNutt had sexually abused a boy while coaching for the Halifax Capitals hockey team in 1986 to 1988. The Capitals have since been renamed the Halifax Hawks.

In the suit, the alleged victim, M.W.G., was a player on the Capitals team and was “subjected to numerous incidents of sexual assault by Mr. McNutt while he was acting in his capacity as a hockey coach and volunteer for the [Halifax Hawks Hockey Minor Hockey] Association, Hockey NS, and Hockey Canada.”

Hockey Nova Scotia has not returned a call for comment.

The allegations in M.W.G.’s lawsuit echo those contained in a fifth lawsuit, filed in 2014, brought by S.P. That suit says that around 1984, when S.P. was 11 or 12 years old, he was a hockey player and a student at Westmount Elementary and Junior High School. McNutt was both a hockey coach for the minor hockey association and a substitute teacher at Westmount.

McNutt, alleges S.P.’s suit, “displayed an active interest” in S.P., taking the boy and his friends “to lunch, to the movies, and other activities appealing to children.”

S.P. alleges that one day, when S.P. was in Grade 7 or 8, “the intramural sports games had been cancelled at lunch and both Mr. McNutt and [S.P.] returned to the changing rooms at Westmount, which included an area in the back that had showers. Mr. McNutt asked [S.P.] to accompany him to the back of the showers and proceeded to touch him sexually.”

S.P.’s lawsuit names McNutt, the school board, and the minor hockey association as defendants.

None of the allegations contained in the five lawsuits filed against McNutt have been proven in court.

A conviction and a pardon

The Daily News article gave no further details, and the paper did not subsequently report on what sentence McNutt received.

Some time after that conviction — it’s unclear when — McNutt was pardoned for the sexual assault conviction. When someone is pardoned of a conviction, all court records related to the charge and conviction are sealed, and the Halifax Examiner could find no court record of McNutt’s 1994 conviction.

Regardless, by 1994, police knew that McNutt had preyed on children. A pardon does not lead to the destruction of investigative records kept by police. Yet knowledge of McNutt’s 1994 conviction does not appear to have informed later police investigations of McNutt until recently.

Who is Michael McNutt?

In 2013, McNutt pleaded guilty to an indecent assault on a child for an incident that occurred in 1981. A second count of an act of gross indecency was withdrawn. The victim of the assault is not one of the five men who have filed suit against McNutt.

For that conviction, McNutt received a conditional 12-month sentence, and was placed on the sex offender registry for 20 years.

McNutt’s life story is told in a pre-sentence report filed with the court. According to Probation Officer Greg Sullivan, McNutt said that he was raised in a “devout Catholic household,” and that “McNutt described himself as a shy, timid child while growing up, adding that his father was a very firm disciplinarian, therefore he would never ‘step out of line.'”

“Mr. McNutt,” continued Sullivan, “states corporal punishment was the method of discipline used in his household, mainly at the hands of his father… Mr. McNutt states his father did physically abuse he and his sister when he was younger, adding his father stopped using alcohol altogether when the subject was aged 15. Mr. McNutt felt the physical abuse was usually triggered from his father’s alcohol consumption and ceased when his father gave up drinking.”

McNutt told Sullivan that he was sexually abused as a child, when he was 14 by a “playground leader” and when he was 15 by a “an older male” who sexually assaulted him in Fort Needham Park.

“Mr. McNutt admitted he was sexually conflicted most of his life,” wrote Sullivan, “adding that he suppressed a lot during his life, which he contributed (sic) to ‘Catholic guilt.’ … Mr. McNutt commented, in struggling with his sexuality during most of his adulthood, he ‘did stupid things and that’s why we are here.'”

Timmons wrote that McNutt’s 1994 conviction — the one for which he was later pardoned — was a turning point in his life.

After the 1994 conviction, wrote Timmons, McNutt attended a 22-week Sex Offender Program and was prescribed Antabuse to combat his alcoholism. He hasn’t had a drink since.

When he was drinking, however, McNutt was consuming between “a quart to a 40-ouncer a day.”

McNutt was convicted on charges related to sexually abusing children in 2013 and 2015, but it wasn’t until 2016 that police realized the extent of the sexual abuse at the hands of McNutt.

By that time, so many men were coming forward claiming to be childhood victims of McNutt that police realized that the scope of the abuse could be much larger than anyone had previously suspected. And so, Project Apollo was created in October 2016 to conduct a thorough investigation.

The Halifax Examiner learned of the existence of Project Apollo in May, through a court document. We called the Halifax Regional Police Department for comment, and were told that the court document was indadvertedly released publicly. The document has subsequently been sealed.