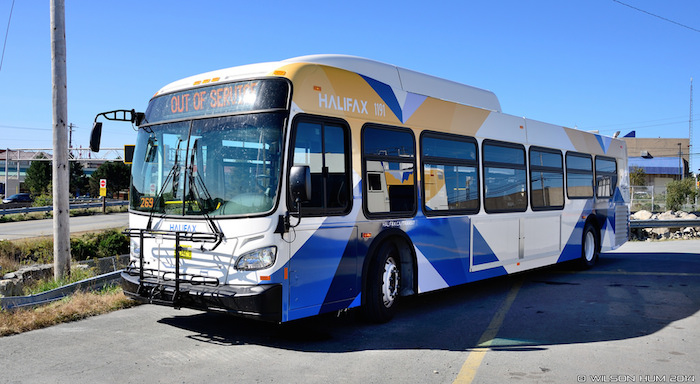 This morning, the city issued a Request for Proposals for an initiative called “Halifax Transit Technology Program – Fare Management.”

In May of 2014, Halifax Transit hired Trapeze Software Group to implement what’s called the AVL+ program. The RFP explains:

My understanding that Trapeze is providing the back-end software and GPS systems for buses, but another company is needed for the hardware to connect to Trapeze’s systems. So in the Fall of 2014, a RFP was issued looking for a “Fare Management Solution”; the winning vendor would oversee the following programs:

In other words: No Smart Card, Credit Card, or Smartphone payments. No Ticket Vending Machines. No public interfaces, meaning we won’t be able to find real-time bus info via a website or on our smartphones.

Fear not, though: The “objective” of the RFP is to “Improve service quality and customer satisfaction by successfully implementing a state of the art solution.”

State of the art, heh. In the rest of the civilized world, “state of the art” transit technology includes all the stuff Halifax Transit is omitting from the RFP.

I have this recurring nightmare that Halifax is stuck in the 1980s. The Nova Centre looks like 80s architecture, our government’s labour relations are reminiscent of Reagan’s 80s policies, the Chronicle Herald is trying to hold onto an 80s business model, and now our transit system is getting technological upgrades that were “state of the art” in the 80s.

The Department of Health and Wellness announced a “reorganization” yesterday:

In all, 100 positions at the department will be eliminated. The department will transfer 62 positions to the Nova Scotia Health Authority, the IWK and the Department of Communities, Culture and Heritage. Twenty people have received layoff notices. Some vacant positions or terms will also end. As part of the reorganization, 25 new positions will be created.

Halifax council yesterday voted to implement the changes at the fire department recommended at its previous meeting by councillor Steve Craig, with one change: the two aerial trucks will be staffed by two firefighters instead of four, thereby cutting about a million dollars off the $5.2 million proposal.

This was all very anticlimactic. Dartmouth gets to keep its fire station, a bunch of new firefighters (32) will get hired, the aerial truck in Burnside will be taken off the cinder blocks and put into action, and everyone will pretend like it’s not costing any money. Councillor Gloria McCluskey went so far as to say we really can’t predict how this will affect the tax rate because once the new convention centre opens the city will be rolling in dough.

Parker Donham continues his series about “The Mess in Richmond County.”

Living in an economically depressed region, we sometimes allow our hopes (for economic development) to marginalize what should be a more rational approach to its attainment.

Accordingly, we open ourselves to speak of projects such as “rocket launching sites” (remember that Bras d’Or location proposal) and, perhaps, even more tragically, instances of wasted public investment such as KeataPhrma Inc. That one was sold with such apparent veracity that Cape Breton University instituted a program of employee training for it. It turned out to be an abject failure. Politicians from all parties, government funding agencies and the usual talking heads lined up once again touting the “viability” of the project.

After its failure, its proponents merely adopted an “oh well, these things happen” attitude. Where was the due diligence? Where was the accountability? Significant amounts of public dollars were wasted. Try missing a credit card payment. You will be called to task. Not so for those politicians and government-funded agencies who spend money recklessly. For them it is on to the next project.

This is why we should be inquisitive and ask the appropriate questions before we once again march in unison to the drumbeat of another grand project positioned as the new economic saviour. Asking the right questions does not imply negativity or defeatism. Instead it says we have the confidence to peer beneath the headline and analytically determine what should represent our economic priorities and how we can best achieve them. Only in this manner will we accomplish anything meaningful and lasting.

One essential ingredient to any project that has such meaning is private money. If something is to be viable then surely we should see private investors, be they local or otherwise, seeking involvement in the project. All too often all we hear are the plaintiff pleadings of politicians and the employees of government-funded economic agencies. What they are saying may not necessarily be wrong but always at its core lurks a common theme. Politicians spin the dream in order to maintain their positions; publicly funded agencies do so similarly to sustain their funding spigot and, with it, their jobs.

The fact is many of these people, had they been in the Titanic’s wheelhouse, would have told worried passengers, “don’t worry, we are just stopping for ice. Everything is okay. Now go back to sleep.”

Be it the development of a container terminal or any other mega project, what is the opinion of our local business leaders and, for that matter, experienced business persons in the respective field of enterprise? We have become accustomed to politicians and these government sponsored power centers speaking of “all that is possible” and so forth.

But here’s a challenge. Ask several local business people point blank. Do you believe in this or that project and, if so, how much of your own money are you prepared to invest in it? Then we might see the truth behind many of the headlines.

Public Accounts (9am, Province House) — Peter Vaughan, Deputy Minister of Health, and Janet Knox – President of the Nova Scotia Health Authority, will be asked about the Auditor General’s 2015 report on the Nova Scotia Health Authority Business Plan. No doubt the opposition will use the opportunity to dig into yesterday’s layoffs at the Department of Health and Wellness.

This Gun For Hire (8pm, Dalhousie Art Gallery) — a screening of the 1942 film by director Frank Tuttle. Explains IMBd:

When hired killer Philip Raven shoots a blackmailer and his beautiful female companion dead, he’s is paid off in marked bills by his treasonous employer who is working with foreign spies. 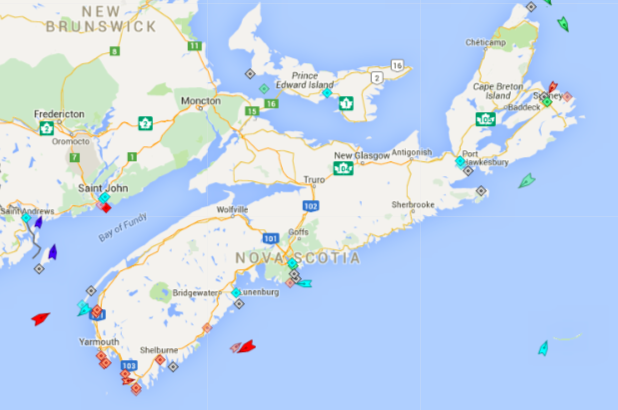 The seas around Nova Scotia, 7:45am Wednesday. Map: marinetraffic.com

The reason I got up so early is I’m spending as much time as I can on the DEAD WRONG series. Part 2 will be published Saturday.