You are here: Home / Featured / Halifax has too many fireworks displays: Morning File, Monday, October 23, 2017

1. An expert explains why there’s no hotel at the Nova Centre 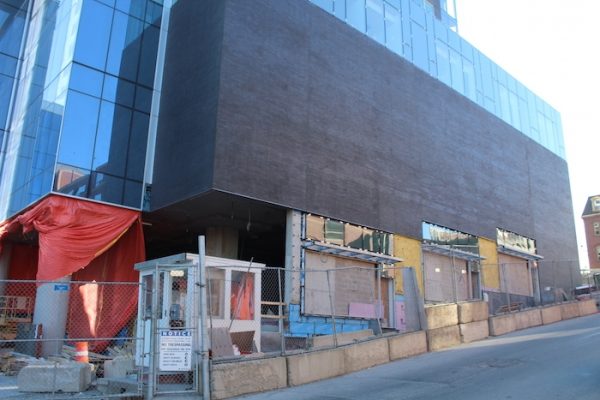 The hotel at the Nova Centre is still under construction and no operator has been named. Photo: Halifax Examiner

Why hasn’t an operator been named for the hotel being constructed above Halifax’s new convention centre?

That’s the question I asked last week of Jan deRoos, a professor of Hotel Finance and Real Estate at the School of Hotel Administration at Cornell University. A specialist in hotel management and franchising, deRoos has created a software program for hotel valuation. He’s published papers with titles like “An Analysis of Data Regarding Public Private Partnerships to Encourage Hotel Development in the United States,”Developing and Renovating Hospitality Properties,” and “Structuring Hotel Deals to Achieve Strategic Goals: An Owner’s Perspective.” If anyone knows about opening hotels, it’s deRoos.

Contacting deRoos was a shot in the dark, but he immediately returned my email and we agreed on a time for a phone interview. The night before the interview, he spent hours researching the Halifax market, and our subsequent interview lasted about an hour.

He went on to explain why and how Halifax’s hotel market is soft, why a potential operator would move with extreme caution before agreeing to move into the Nova Centre, and if an operator really has agreed to move in, who that operator probably is.

Click here to read “An expert explains why there’s no hotel at the Nova Centre.” 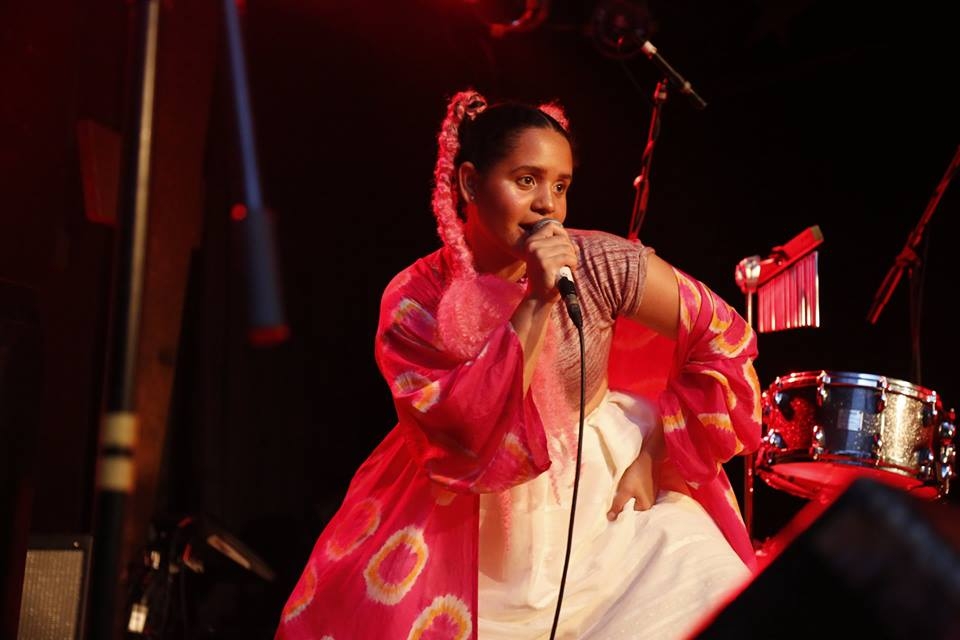 “The Halifax Pop Explosion is vowing to do better in the wake of a racist incident at a concert during its 25th anniversary festival,” reports Maggie Rahr for the Halifax Examiner. 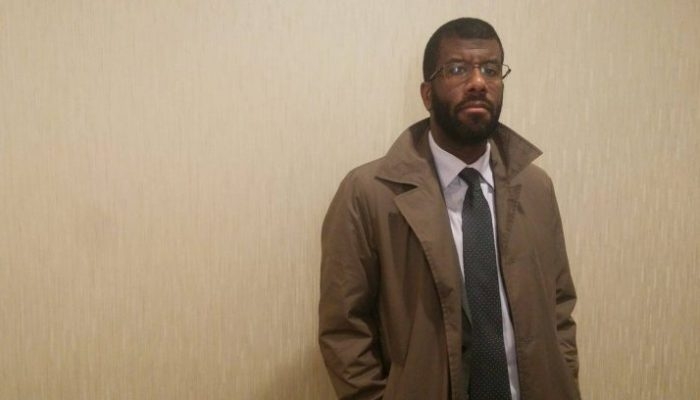 “On Friday, a three-member panel of the Nova Scotia Barristers’ Society, which had earlier found African Nova Scotian lawyer Lyle Howe guilty of professional misconduct and incompetence after the longest, most expensive hearing in bar society history, passed sentence on him,” reports Stephen Kimber. “It ordered Howe disbarred for at least five years and said he must pay the society $150,000 before he is allowed to even apply for reinstatement.” 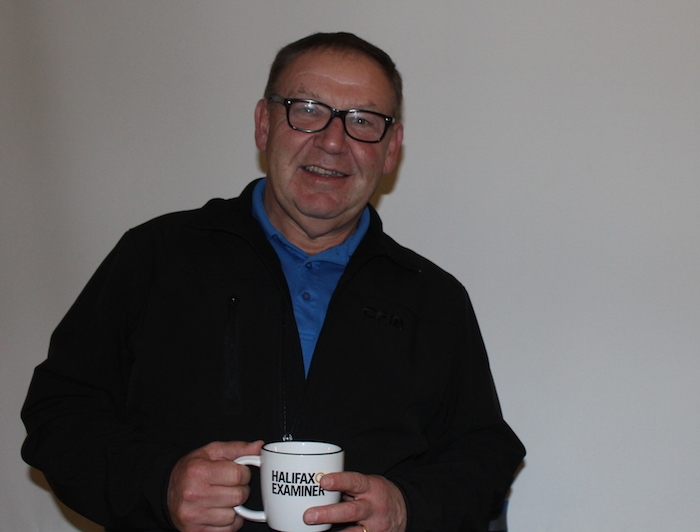 In episode #134 of Examineradio, we talk about Dalhousie students partying hard, that blasted launchpad gets a mention, and Darrell Dexter gets blunt on weed. All that and special guest host Sandra Hannebohm makes her Examineradio debut.

5. The “public consultation” about Shannon Park was bullshit

Remember last year when the “public consultations” for the Shannon Park redevelopment were being celebrated?

Here’s how some unnamed scab at the Chronicle Herald wrote about it:

The ‘new’ Shannon Park will feature everything from quiet residential streets to high-rises and commercial space, according to a plan revealed Wednesday at a public meeting.

The long-awaited preferred concept for the redevelopment of the former Dartmouth military base, largely empty for 15 years, also includes waterfront access at several points, an urban centre, 17 acres of green space and an extensive trail and cycling system, according to plans presented by Greg Zwicker, vice-president of WSP Canada Inc. and Chris Millier, director of real estate for Canada Lands Company, which owns the 39-hectare property.

Dartmouth city councillor Tony Mancini said he likes the concept. “It’s a really exciting opportunity,” he said, “one that can have a huge impact on HRM (Halifax Regional Municipality) and particularly Dartmouth North.”

Mancini said he was impressed with the amount of public consultation in recent months, something that’s increasing in the municipality. 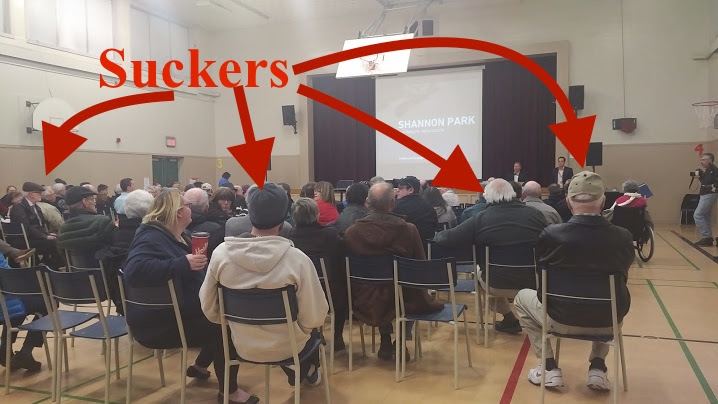 People who thought they were taking part in a meaningful public consultation about the Shannon Park redevelopment. Photo: Darren Fisher. Annotation: Halifax Examiner

And MP Darren Fisher wrote about it in his newsletter:

Where does it stand?
Through public engagement Canada Lands has adopted a preferred concept that fits with the community’s feedback.

They have built around core principles of vibrancy—having a vibrant urban centre, public realm—park and trail system, mobility—walkable space and space for bicycles, land use—using a range of building types and land uses, commemoration—revitalizing and recognizing the history of Shannon Park and its previous vibrancy, and finally utilizing the waterfront.

Here’s a lesson from the Halifax Examiner’s handbook on government bullshit: when someone tosses around the word “vibrancy” with abandon, understand you’re being played the fool.

The result of all that public consultation was a bunch of pretty maps like this one: 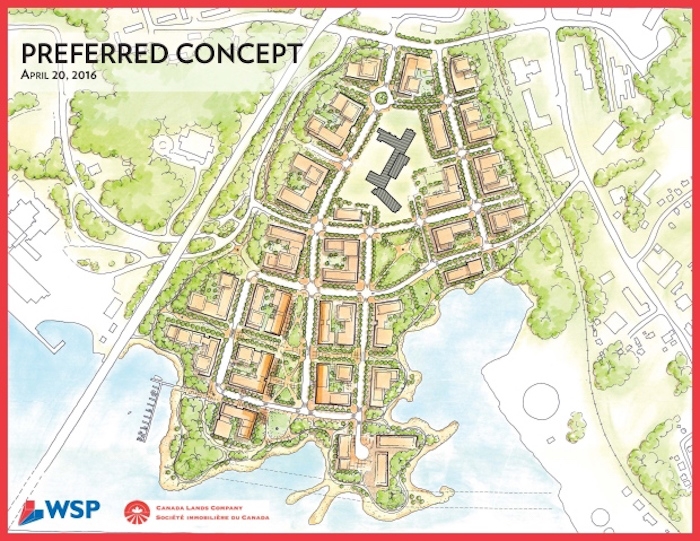 “They really did listen to the public,” Mancini told Pam Berman of the CBC.

Well, except when the absurd notion that HRM could host a second Amazon headquarters came around, all those fancy maps and public consultations and listenings to the public were chucked right out the window of democracy, reports Brett Bundale for the Canadian Press:

The report said the municipality was considering submitting Shannon Park as the site for the new Amazon headquarters.

The abandoned military enclave in Dartmouth is more than 30 hectares of waterfront real estate across from Halifax’s core.

The location, owned by the federal Canada Lands Company, has opportunities for mass transit, active transportation, and sustainable building technologies like seawater cooling and heating, the report said.

It’s also located next to a nearly four-hectare site owned by Millbrook First Nation, and the staff report said discussions were held to potentially include the land in the bid.

In short, the mostly residential concept developed through public consultation was switched out for a gigantic commercial headquarters.

No, Amazon won’t be coming to Halifax, so the Shannon Park plan will revert back to the what the public wanted… until some other shiny object comes around, and then the public be damned again.

“Subcontractors at the Irving Shipyard referred to a married lesbian couple working at the Halifax facility as ‘dykes,’ ‘rats,’ and ‘hateful troublemakers,’ according to a recent Labour Board decision,” reports Chris Lambie for the Chronicle Herald. 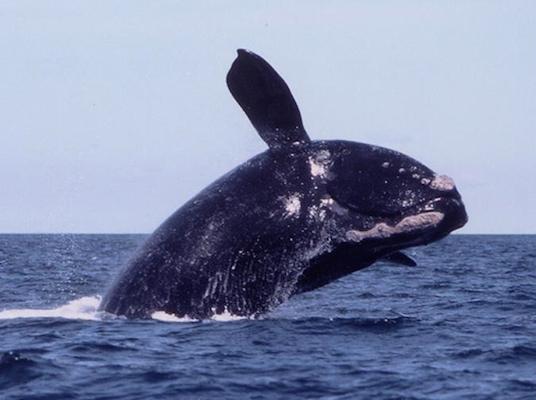 “To the community of researchers, rescuers and others gathered in Halifax for the North Atlantic Right Whale Consortium’s annual meeting, each of the 15 whales who died off the coast of Canada and the U.S. in recent months was mourned both as an individual loss as well as a dire blow to the endangered species’ survival,” reports Adina Bresge for the Canadian Press:

Presenters spoke with a renewed sense of urgency to protect the 450 right whales still alive as of 2016, according to the latest population estimate, which does not account for this year’s losses.

Scott Kraus of the New England Aquarium in Boston said in an interview that the death toll since spring could be higher than the official count, and combined with dwindling birth rates, the species is at risk of extinction.

“We’ve got to do something, because the trajectory of the decline is such that this population could be gone in two to three decades,” Kraus said.

8. The province spent $9.4 million on the Yarmouth ferry this year

“The Cat ferry carried 41,463 passengers from Portland to Yarmouth, Nova Scotia, between the end of May and Oct. 15, a 17 percent increase from the 35,500 passengers who took the ferry in 2016,” reports Peter McGuire for the Portland Press Herald.

McGuire confuses the numbers — 41,463 is the total number of passengers travelling both ways on the ferry. The agreement between the province and Bay Ferries is premised on an annual passenger count of 60,000. Even that is a far cry from the 80,000 passengers expected of the Nova Star, not to mention the 330,000 people who made the passage in the ferry’s heyday in 2002.

Nova Scotia provided $9.4 million Canadian in subsidies to the ferry in 2017.

“A ‘significant’ grassfire on Citadel Hill had firefighters forcing their way into the historic site to put out the blaze caused by a rogue firework,” reports Haley Ryan for Metro:

According to Halifax Fire division commander Mike Blackburn, they responded to a call at Citadel Hill just before 9 p.m. Saturday. The Leukemia & Lymphoma Society of Canada’s Light the Night fundraiser event at the Garrison Grounds had been setting off fireworks, and Blackburn said one of the “errant fireworks” made it’s way to the top of the fort.

Nothing against the Leukemia & Lymphoma Society, but do the rest of us really need the light and noise pollution (and fire danger) generated by its fundraiser? Dogs all over town were freaking out.

I’ve never lived anywhere else where fireworks are such a regular feature of urban living — there are more fireworks displays in Halifax than there are police helicopters shining spotlights down on L.A., which is saying something. Every damn weekend, another round of fireworks.

We should limit them. You only get to freak out dogs four times a year, or whatever, and the Association of Associations and the Bestest Nonprofit doing the Most Important Work on Earth and the Millionaire Couple Got Engaged can find some other way to celebrate.

Halifax Explosion 100th Anniversary Advisory Committee (Tuesday, 5pm, NSCC IT Campus) — the committee got most of what it wanted for the time capsule, but for various reasons several items will be omitted: a bibliography of Halifax Explosion publications; a catalogue of contemporary works of art specific to the Explosion; maps and plans of 1917 and 2017; a local restaurant menu; and a map of flora that survived the Explosion. Couldn’t they just stick all that stuff on the internet?

Systems of Care (Monday, 12pm, room 409, Centre for Clinical Research) — George Kephart will speak on “Improving Systems of Care to Address the Needs of Patients with Coexisting Physical, Mental and Social Deprivation Conditions.”

Open Access (Monday, 4pm, Great Hall, University Club) — John Willinsky from Stanford University will speak on “The Future of Open Access to Research and Scholarship: Lessons from the Medieval to the Early Modern Era.” 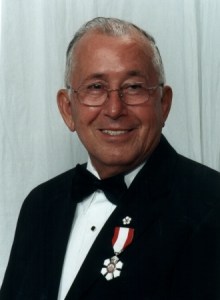 Daniel Paul (Monday, 7pm, Room 1009, Rowe Building) — the Mi’kmaw historian and elder will discuss his book, We Were Not the Savages.

Diversity on Campus (Tuesday, 12pm, room 1009, Kenneth C. Rowe Management Building) — a discussion on “The Equity Myth: Diversity on University Campuses,” examining how and why underrepresentation of “racialized faculty” occurs.