Blackface at Brock. Image from CBC.

Last Monday, some Dalhousie students protested at the welcoming reception for incoming interim president Peter MacKinnon. As I noted Tuesday, the students were particularly riled over MacKinnon’s book, University Commons Divided: Exploring Debate & Dissent on Campus, which included a section that downplays and excuses the wearing of blackface while mischaracterizing and sidelining those who object to it.

On Saturday, El Jones wrote a detailed critique of MacKinnon’s view of protests over blackface, noting that MacKinnon ignores a considerable academic literature on blackface, and failed to contact even one scholar about it. So, Jones contacted them. 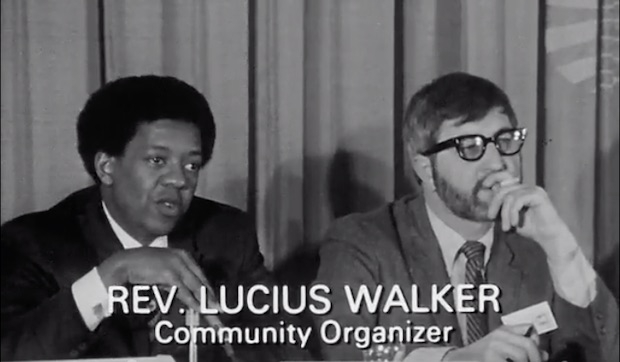 In 1970, a dozen outside experts came to Halifax for a week to turn the city ‘upside down.’ This week, you can see excerpts from ‘Encounter on Urban Environment,’ the NFB’s documentary on that cataclysmic week in Halifax, and discuss whether it’s time for another upside-downing.

Click here to read “Encounter re-encountered, with lessons for today.” 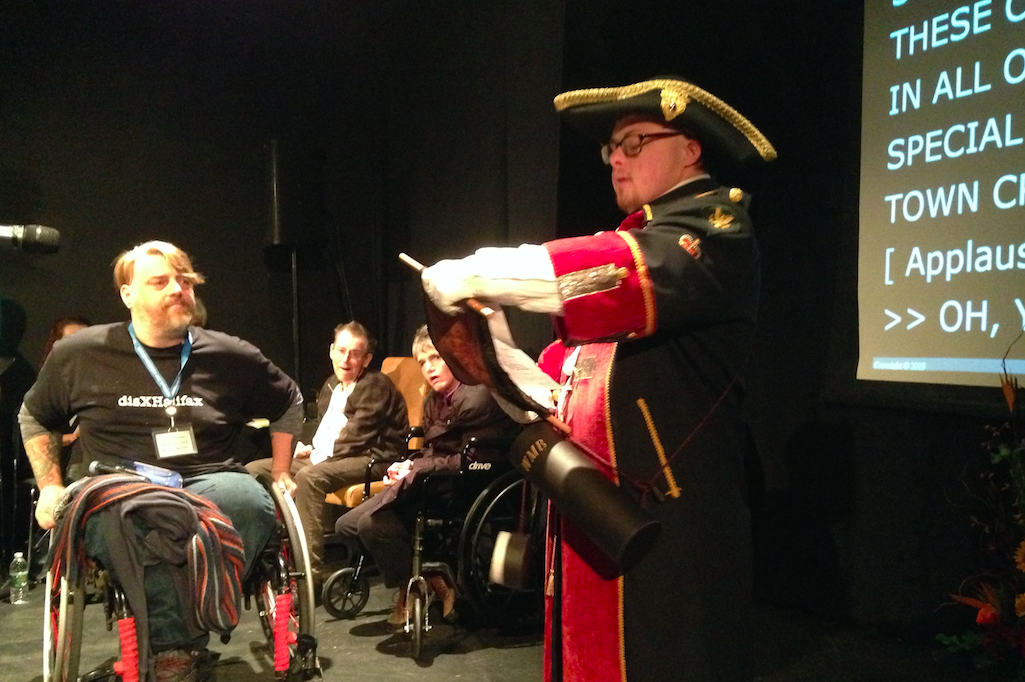 “DisabilityX is people telling stories to illuminate their lives so we can see the commonality in all of us,” said Paul Vienneau, the Master of Ceremonies who presided over the evening from his wheelchair at centre stage. A crew filmed the event as part of a documentary about his successful crusade for a legislated Bill of Rights to improve accessibility to government services.

At its meeting tomorrow, Halifax council is being asked to continue to develop ideas for addressing poverty as outlined in the United Way’s “Building Poverty Solutions” report. It’s great to see the United Way undertake this initiative, and it’s even better seeing that the report includes urging the city to adopt a living wage policy:

Work with HRM to implement a living wage ordinance for all municipal staff and third party contractors.

So good on the United Way. But good dog in heaven, city staff has been kicking a living wage policy down the road for four years and still haven’t come back with any concrete proposals — the living wage is (strangely, to my eyes) part of the Public Safety Strategy, which references a 2015 report issued by the United Way and the Canadian Centre for Policy Alternatives that called for a living wage ordinance.

This is not rocket surgery; plenty of cities across North America have adopted living wage ordinances, and they work.

At this point, the continued “study” and “developing” amounts to staff actively opposing implementation of a living wage ordinance. I again remind you that over 600 city employees are earning over $100,00o a year, and councillors make over $80,000 a year, and yet staff and councillors conspire to pay shit wages to people doing the necessary work of the city. It’s outrageous. No one should be in the employ of the city or its contractors and working for poverty wages.

Councillors should demand that the living wage policy be implemented pronto, no more study, no more development, no more delay.

“A hole drilled for a mineral exploration company seven years ago is leaking contaminated water into the environment, and although the Nova Scotia government learned of the problem last year, staff decided not to fix it,” reports Frances Willick for the CBC:

The incident raises questions about how the province regulates exploration activities.

Water tests taken next to the hole found arsenic and iron levels that were more than 10 times higher than what the federal drinking water quality guidelines allow and, in the case of the arsenic, more than 25 times the Canadian Council for the Ministers of the Environment guidelines for freshwater aquatic life.

Emails show department staff discussed the problem and possible solutions over a four-month period. Two days after a site visit in August, a mining engineer for the province wrote a report outlining four options for dealing with the hole, including excavating and sealing it.

The fourth option, which he dubbed the “Do Nothing Option,” notes that “if the environmental and human health impacts from the discharging water are considered acceptable,” the water could be left to flow indefinitely.

About a week later came the response from the province’s manager of mineral development and policy: “Management has decided to take Option 4 with the condition that we continue to monitor and intervene if results justify.”

Willick goes on to interview SMU prof Linda Campbell about the risks of arsenic.

“The Bus Stop Theatre Co-op has launched a plan to fund the purchase of its building to avoid eviction at the end of the year,” reports Robyn Simon for The Signal, the King’s Journalism School publication:

The theatre located at 2203 Gottingen St. has been open for over 15 years, functioning for the last four as a non-profit co-operative. The building’s owner can no longer afford the space’s upkeep and has decided to sell in December.

The owner has given The Bus Stop first choice to purchase the building, but it will cost the co-op “many hundreds of thousands” of dollars, said Labelle.

Moving the port to Dartmouth

Former finance minister Bernie Smith is weighing in on moving HalTerm to the old refinery site in Dartmouth:

The Halifax Port Authority has commissioned a study that has examined the issues to be addressed in a port move, but it has not been released, and, as a result, those of us who are interested in this situation are denied the benefit of this information.

At first glance, this seems like a further example of “silo think.” The port, presumably, is making its own decisions based on what is best for the port, but what of the interests and needs of the entire city? What of the potential for providing land for housing at a time when we are seeing our working population steadily pushed out of the city core, leaving a population of students and wealthy retirees? Shouldn’t there be a broad and healthy discussion of the issues involved here?

Many of the benefits are obviously at the municipal level: freeing up considerable port and railway lands for housing; removing obsolete railway tracks from the Dartmouth waterfront, giving Dartmouth’s downtown a great opportunity; the probable clearing of the Halifax rail cut for transportation use (while almost certainly solving the downtown Halifax truck traffic issue).

Because the study is secret, no definitive dollar value has been placed on such a move. I’ve heard figures like two billion dollars, but as far as I know, those are guesstimates; the real figure could be much larger. My understanding is that such a move would also involve a massive dredging project.

It doesn’t seem realistic to me, but without access to the study, who knows?

Smith, by the way, knows where all the bodies are buried. He should write a tell-all book.

Halifax Peninsula Planning Advisory Committee (Monday, 4:30pm, City Hall) — the Edelstein family is constructing a five-storey building at 2165 Gottingen Street, but wants a bylaw amendment that would allow them to add an additional storey at the rear of the property.

City Council (Tuesday, 1pm, City Hall) — lots on the agenda this week, including two heritage hearings that would allow for moving around and altering registered heritage buildings so those two ginormous buildings can be built at Robie Street and Spring Garden Road; a proposed splash pad on the Dartmouth Common (by the skateboard park); a mountain biking strategy; a “park naturalization strategy” that basically allows for dead zones in parks to go to weeds; a Daffodil Garden for Cancer at Ferry Terminal Park in Dartmouth; and councillor Richard Zurawski wants to declare a “climate emergency.”

Human Resources (Tuesday, 10am, One Government Place) — Tracey Taweel, the CEO of the Atlantic Immigration pilot project at the Nova Scotia Office of Immigration, will say how swimmingly everything is going.

Health (Tuesday, 1pm, Province House) — another “agenda setting” meeting in which no contrary agenda items will be allowed.

Law & Technology Society Eminent Speaker Series (Tuesday, 12:30pm, Room 104, Weldon Law Building) — Matt Peters will talk about newfangling in the legal profession. Peters is the “strategy lead” for something called MT>Play, which is a division of the McCarthy Tétrault law firm dedicated to making money off people addicted to gambling.

I’ve had a very strange and eventful January.