You are here: Home / Featured / Halifax council and the Martha Mitchell effect 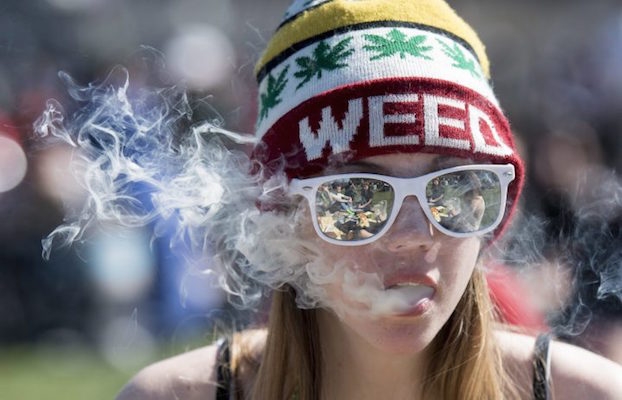 “The federal government will announce on Wednesday morning that it intends to proceed with a plan to grant pardons to Canadians who have past simple possession charges,” reports CTV:

Sources have confirmed to CTV News that the government intends to issue pardons, and not record expungements or amnesty, for cases of possession of 30 grams or less, as that will be legal as the new recreational legalization regime comes into force at midnight tonight [that is, this morning].

The pardons won’t be granted immediately, but ministers are expected to outline options that could be used to facilitate the pardon process, and potential ways to expedite the sometimes protracted endeavor.

One option could be an application-based approach, where people would have to fill out a form to qualify.

Asked about pardons on the Hill earlier on Tuesday, Prime Minister Justin Trudeau said “we’re going to be working on that as I’ve said, as soon as the day of legalization comes into force.”

“Along with the recent increase in headlines about the upcoming legalization of cannabis in Canada, there have been more stories about raids on illegal dispensaries across Nova Scotia,” reports Ian Fairclough for the Chronicle Herald:

But police say there is no master plan for a mass raid of remaining dispensaries once new laws come into effect Wednesday.

While she acknowledged that several dispensaries have been searched and people arrested in the past couple of months, she said that there is no schedule for shutting them down as legalization comes into effect.

“There isn’t a plan. If there are illegal operations, we will continue to address that,” she said. “The only plan is to do what we’ve always done.”

She said it wouldn’t make sense to divert all resources into dispensary busts in a short time when police are also dealing with investigations of illicit drugs all across the province.

He said that there isn’t enough manpower to take down all the outlets at once while also conducting other investigations.

But, he said, those raids will still happen as police deal with complaints and receive information.

One such complaint was made about a dispensary in Dartmouth on August 23. The dispensary at 261 Pleasant Street has been called both Maritime Vapors and Maritime Heights. It’s in a tiny two-unit commercial building (a tattoo parlour is next door) in Woodside, with apartments above.

“The complainant, who was not identified indicated that the dispensary has been rebranded as Maritime Vapors and that customers of the business were smoking marihuana in vehicles in the parking lot and blaring loud music, causing a disruption to the community,” wrote Detective Constable Pat O’Neill in an application to obtain a search warrant. “I was not provided with any information to help me assess the credibility of the complainant so I cannot offer any qualification as to the reliability of the information.”

Well, that possibly reliable, possibly not complaint was all it took to put the full force of the Halifax police into action.

That night, O’Neill and Detective Constable Josh McNeil (who I believe is some sort of relative to both Premier Stephen McNeil and Deputy Police Chief Robin McNeil, and who was paid $123,880.11 last year) drove by the dispensary on a recognizance mission. “I was able to see mason jars containing marihuana on the shelf when we drove past an open window.”

The next day, Detective Sergeant William Morris (last year paid $140,754.93) went by the dispensary and “observed a party leaving the dispensary in a vehicle,” wrote O’Neill. “DS Morris conducted a traffic stop on the vehicle that this customer left in and had a conversation with them.” O’Neill doesn’t say what the probable cause for the stop was, but does relate that “DS Morris was told by the customer that they had just purchased two grams of marihuana for $10 each.”

In his application for a search warrant, O’Neill went on to lecture the justice of the peace on the evils of marihuana, which is the cop spelling of the weed because that’s how it’s spelled in the criminal code.

“While on the face of it marihuana dispensaries appear to be relatively harmless enterprises, there have been many incidents as of late where dispensaries have been targeted for violent robberies, their owners have been the victims of home invasions, and most recently a marihuana dispensary on Joseph How Drive in Halifax was firebombed (this dispensary was on the ground floor of a multi-level apartment building),” wrote O’Neill. “Dispensaries are targeted by rival groups or criminals because the benefit of robbing a dispensary is that two valuable commodities can be obtained for the price of one robbery. Dispensaries place the communities they are in at risk due to the incidents of that nature.”

So better for the cops to attack them, I guess. And if a rival wants to shut down a dispensary all they have to do make a possibly reliable, possibly not complaint about music in the parking lot. 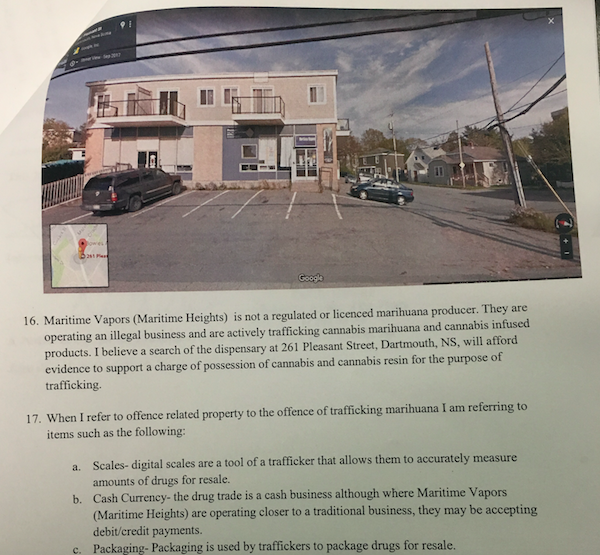 The next day, the third day of this police investigation by multiple highly paid cops, Maritime Vapors was raided, and a 25-year-old man working the place was arrested.

3. No one much cares that we’re destroying the planet: Halifax council edition

Meanwhile, councillor Richard Zurawski yesterday made the completely sensible suggestion that Halifax council should pass a resolutions in opposition to offshore drilling. Such resolutions have been passed in Lunenburg and other towns.

Zurawski cited the release of the International Panel on Climate Change’s most recent report last week, which underscored the need to cut greenhouse gas emissions pretty much immediately or face irreversible climate change and all the human horrors that will come along with it.

The motion was defeated on a 10-6 votes. The yes votes (in opposition to drilling) came from councillors Shawn Cleary, Lisa Blackburn, Stephen Adams, Waye Mason, Lindell Smith, and Zurawski. Mayor Mike Savage is in China and so didn’t vote. All others voted pro-drilling.

Understand this was a toothless motion. Had it passed, it would have had no force of law. Stephen McNeil and his government would have kept on with their plans to expand the offshore. The motion was merely symbolic, a statement of concern.

But even that was too much for the council majority. And that majority, I’m sorry to say, is reflective of their constituency. The sad fact is that no one much gives a shit that we’re destroying the planet.

Before the council meeting, I attended the “fake news” talk at Dal. I’m glad I went, and enjoyed the discussion. It wasn’t the focus of the event, but at one point panelist Elamin Abdelmahmoud (of Buzzfeed) plugged the podcast Slow Burn, in which Slate reporter Leon Neyfakh retells the Watergate saga as a sort of parallel that might help us better understand the Trump years.

I immediately downloaded the podcast and listened to episode 1, titled Martha, while walking to City Hall for the council meeting. Martha is Martha Mitchell, the spouse of John Mitchell, Nixon’s first attorney general, who was implicated in the Watergate break-in. Martha claimed that immediately after the break-in, she was “forcibly tranquilized and held prisoner in a California hotel room so that she wouldn’t tell reporters what she knew about Watergate.” She went on to say that Nixon was a crook and should resign. This was over a year before Nixon did just that.

The problem was that no one believed Martha. She was portrayed as a mentally ill alcoholic, full of fantasies and delusions. All the sexist tropes were employed to ridicule her. But she was absolutely right.

Neyfakh tells us that there’s now something called the Martha Mitchell effect, named after Martha “to describe the situation where someone is incorrectly diagnosed as delusional but turns out to be right.” 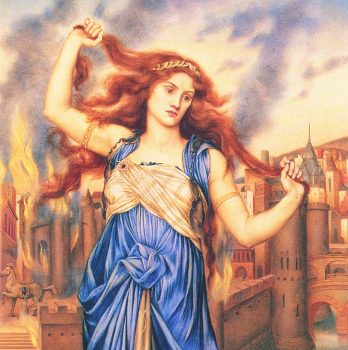 A modern day Cassandra. The Martha Mitchell effect made me think of Cassandra because at some long-ago council meeting, I forget the details, but one of the councillors, Steve Streatch I believe, incorrectly called someone a “Cassandra” — Streatch used the word to described someone who is wrongly predicting terrible things, when in reality Cassandra’s curse was that she correctly saw the future but no one believed her.

There was evidently a lot going through my head between the short walk from Dalhousie to City Hall, because I also thought about a young activist who is working on climate change issues. I don’t know this young person well, but I admire them. They’re more effective than they know, and yet I watch them struggle to bring sense to the world in a society that for the most part simply does not give a shit: Sure, climate change, whatever, my retirement is invested in the oil sands. A carbon tax is a communist plot. Divestment, oh so cute. You know the drill. I watch this young person struggle emotionally with working to change that uncaring world — they appear to be having a very rough time of it — and it pains me a great deal. 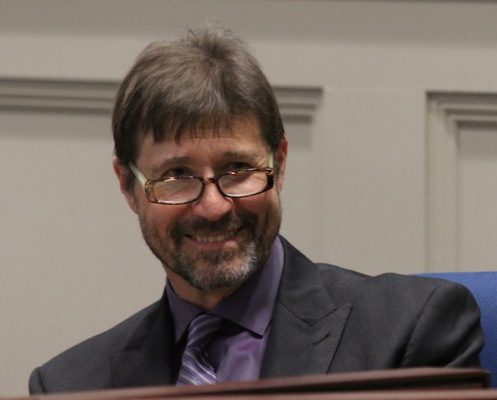 Which brings me back to Zurawski. He’s easy to make fun of. I’ve done it myself. Some of that ridicule is warranted: he can be full of himself and over-bearing, he talks down to people. But on the dire threat of climate change, he’s absolutely correct. And when someone wants to wake the family when the house is ablaze, subtlety and decorum are not called for; you gotta scream “fire!”

The house is ablaze. The planet is burning. The evidence is before us, the facts are solid. We gotta act fast; we gotta act now. But those screaming “fire!” are ridiculed, said to be mentally ill, discounted as fabulists. The Martha Mitchell effect. Cassandras.

And so like the broader society, a majority of the Halifax council simply does not give a shit that we’re destroying the planet. Not even enough to pass a toothless symbolic resolution that would have been ignored in any event. 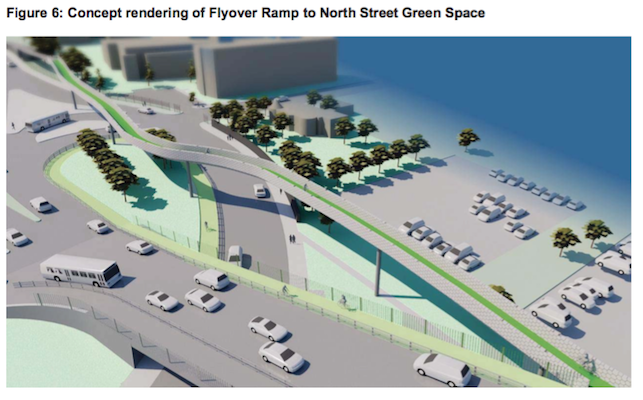 This morning, the city issued a tender offer for design services for the Macdonald Bridge Bikeway Connectors Project. The tender documents aren’t available to the public; the closing date is November 6.

Audit and Finance Standing Committee (Wednesday, 10am, City Hall) — the committee is being asked to give $75,000 towards the St. Paul’s Church wall restoration project, which is half the cost (the other half will come from Parks Canada).

Information Session – Municipal boards and committees (Wednesday, 6pm, City Hall) — if you want to volunteer to be on a board or committee, you could go and see what’s required. Application deadline is October 21.

Public Accounts (Wednesday, 9am, Province House) — the Liberals have limited the questioning of government employees, so who cares anymore?

Mini Law School (Wednesday, 7pm, Room 104, Weldon Law Building) — Faye Woodman will talk about all the legal stuff around dying: wills, pets, and who to give your social media passwords to.

Getting it Right: The Ethics of Getting Clean Water (Wednesday, 7pm, President’s Lodge, Atlantic School of Theology) — Ingrid Waldron will talk. RSVP here.

Climate Change, Sustainable Development and Human Rights (Thursday, 7pm, Ondaatje Hall, Marion McCain Building) — Alan Boyle from the University of Edinburgh will talk about all that stuff nobody much cares about.

No kopyeditor today; please be kind.