You are here: Home / Featured / Halifax cop subject to review board hearing says he’s ‘tired’ of being accused of racial profiling 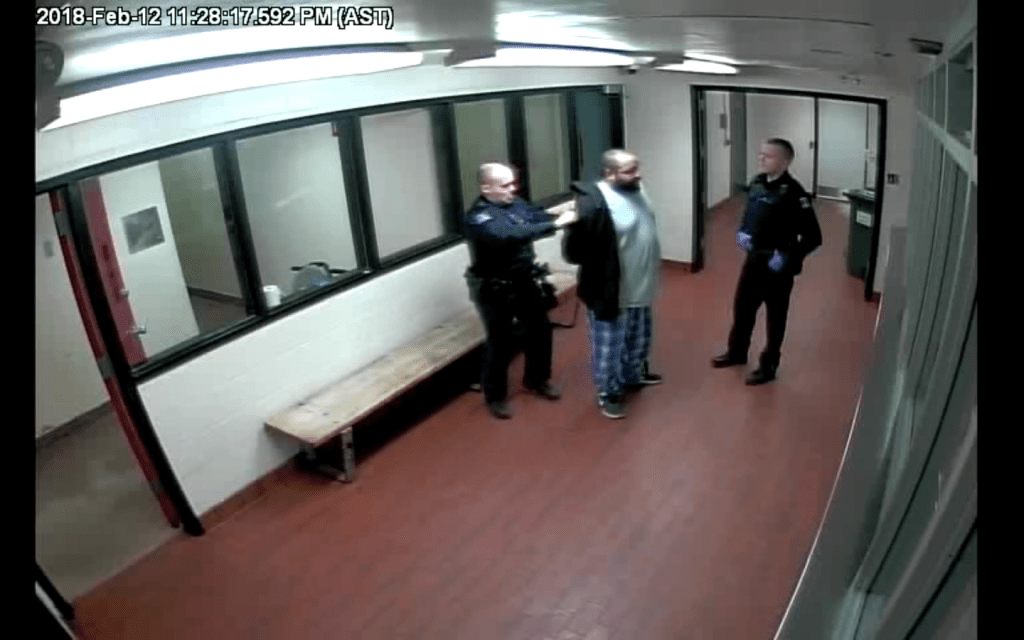 A Halifax police officer accused of racially profiling a Black man in 2018 says that he’s tired of people accusing him of racial profiling.

Const. Brent Woodworth took the witness stand on Tuesday at a police review board hearing dealing with a complaint from Adam LeRue and his partner Kerry Morris.

Woodworth and another officer, Const. Kenneth O’Brien, arrested LeRue and Morris in February 2018 after O’Brien encountered the couple parked in their vehicle in Sir Sandford Fleming Park in Halifax after hours. The couple testified they’d stopped in the park, better known as the Dingle, to make a call after picking up a pizza.

Morris was allowed to leave, while LeRue spent the night in Halifax Regional Police lock-up, and appeared in court the next morning. He eventually agreed to a restorative justice process for a charge of obstruction of justice and paid a ticket for failing to provide his driver’s licence. A third ticket, for being in the park after 10pm, was thrown out because O’Brien wrote it under the wrong bylaw.

Adam LeRue speaks to reporters during a break in his police review board hearing in July. — Photo: Zane Woodford

LeRue and Morris complained to Halifax Regional Police about the incident, and after police decided not to discipline the two officers, the couple appealed the decision to the police review board.

The hearing began back in July, was adjourned, and then continued over three days in October. It resumed on Tuesday at a hotel in Enfield. LeRue, Morris, O’Brien, and a Halifax Regional Police supervisor, Sgt. Brian Palmeter, all testified during those October dates. On Tuesday, Woodworth told his side of the story.

Woodworth — who’s been with Halifax Regional Police since November 2015 and started his career as an RCMP officer in Manitoba in 2012 — told the review board he was called to the scene at Sir Sandford Fleming Park, better known as the Dingle, because O’Brien needed back-up.

When he arrived, Woodworth said O’Brien had already asked LeRue for his identification and wasn’t successful. Woodworth said he then tried to convince LeRue to provide ID. He said that although LeRue was initially “quite agitated, irritated by our presence,” they had a good conversation, but in the end, LeRue still wouldn’t provide his licence.

O’Brien then arrested LeRue and put him in the back of his cruiser.

LeRue told O’Brien his identification was in the vehicle in the glove box, and Woodworth said he and O’Brien decided they needed to search it, but they didn’t want Morris in the vehicle when they did so — “for safety reasons.”

In her testimony in October, Morris said she wasn’t given an opportunity to get out of the vehicle on her own, but that Woodworth ripped her out, causing bruising and a sore shoulder.

Once he’d removed her from the vehicle, Woodworth arrested Morris and put her in the back of his police cruiser, an SUV.

O’Brien searched LeRue’s vehicle and found his identification, and then the two officers decided to let Morris go home. 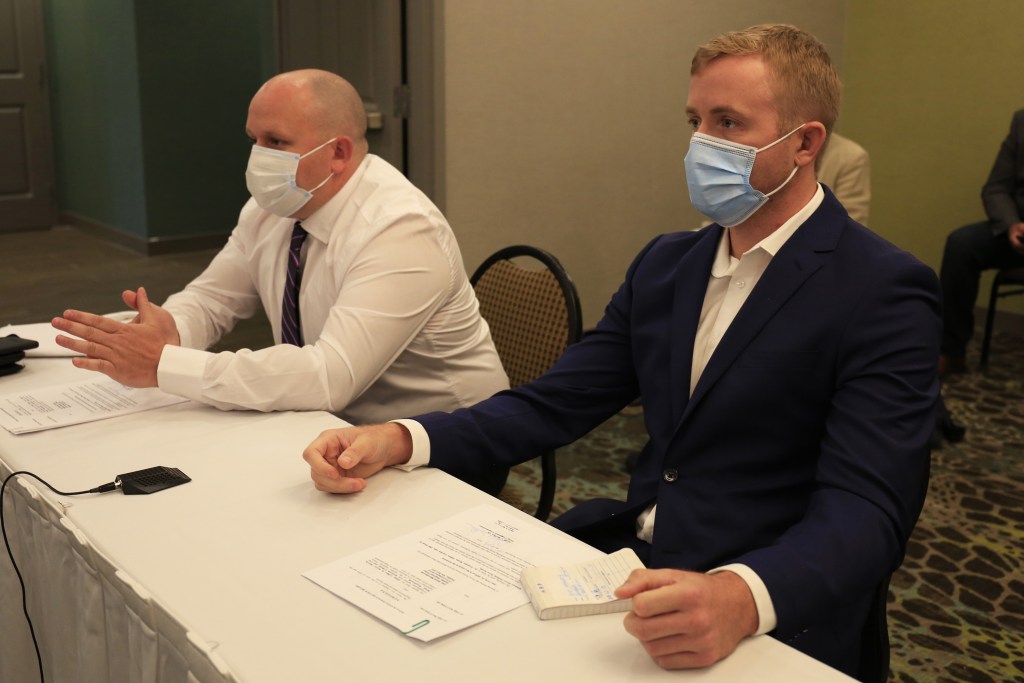 Meanwhile, LeRue had become increasingly angry as Woodworth removed Morris from the vehicle and arrested her. The officer said he was swearing and “hurling insults” from the backseat of O’Brien’s cruiser. Because LeRue was agitated, Woodworth decided to go downtown to help O’Brien book LeRue in cells at Halifax Regional Police headquarters.

On Tuesday, the board saw two videos of the officers’ interaction with LeRue in the booking area from different angles. Woodworth’s lawyer, Nasha Nijhawan, entered the videos as evidence.

The footage shows LeRue being led into the booking area by O’Brien and Woodworth. As O’Brien fills out paperwork on one side of the room, Woodworth removes strings from LeRue’s clothing and shoes and LeRue accuses the officers of racial profiling.

“This fuckin’ goof over here is ruining my life ’cause I was in the park eating pizza,” LeRue says in the video, referring to O’Brien.

“All the murders, all the bad shit happening in this city.”

“It’s only gonna go one way in here, right? It’s gonna go our way,” Woodworth says in the video.

“You gonna beat me up?” LeRue asks.

Woodworth didn’t respond to that question.

“Are you gonna Taser me and kill me like that Edward guy, that mental guy?” LeRue asks.

Woodworth said in his testimony he didn’t know what that meant. LeRue’s lawyer, Ashley Hamp-Gonsalves, asked Woodworth if he’d heard the name Henry Hyde. Hamp-Gonsalves was referring to Howard Hyde, a mentally ill man who died in custody about a day after Halifax Regional Police officers repeatedly Tasered him in 2007.

“I’ve heard of the Hyde Inquiry I believe, but that’s about it” Woodworth said.

Next in the video, LeRue says, “Do what you gotta do while I got the handcuffs on me.” Woodworth said he “absolutely” perceived that comment as a threat.

“You look like you wanna get violent,” LeRue says to Woodworth.

“You just ruined a Black man’s life for eating pizza in a park.”

Through much of the video, Woodworth doesn’t respond to LeRue. But at one point, LeRue directly accuses the officers of targeting him because he’s Black.

“You pulled up, you seen ethnicity Black, you called in, ‘Oh let’s fuck with this guy,'” LeRue says.

“I get tired of hearing that,” Woodworth replies.

Asked during his testimony what he meant by that, Woodworth said he was speaking generally.

“Working in Halifax or surrounding areas, we’re constantly getting accused, not by everyone, but people that are of different races than me, they’re constantly accusing our actions are based on their race and not as a result of police work,” Woodworth said.

The kinds of things LeRue was saying were things he heard “on a consistent basis,” Woodworth testified.

In the video, Woodworth asks LeRue, “Do you think I’ve never charged a white person?” LeRue replies, “You throw the book at the Black guy.”

Woodworth said he’s never heard that term before, but he said people are constantly accusing police of treating them differently based on the colour of their skin.

“From my experience working with police officers in Halifax Regional Police, I haven’t found biases toward the African Nova Scotian population,” Woodworth replied.

Asked whether he’d read Scot Wortley’s report on street checks in Halifax — which found Black people are six times more likely to be carded than white people — Woodworth said he was aware of it, but he hadn’t read it. He also said he hadn’t read an opinion on the legality of street checks by Michael MacDonald and Jennifer Taylor.

Tuesday’s hearing was the final sitting of LeRue and Morris’ police review board hearing. The parties will now make written submissions for their closing arguments. Those submissions will be complete by the end of February, with a written decision from the review board in the months following.