Nova Scotia Business Inc. yesterday released its draft guidelines for the Film and Television Production Incentive Fund, which comes into effect on July 1. According to the press release:

The draft guidelines were developed with input from industry to provide the broadest possible benefits to the industry and taxpayers. They will ensure benefits are broadly distributed – to workers, suppliers, and Nova Scotia communities.

But it’s hard to believe the draft guidelines were run by anyone at all, even a copyeditor, much less anyone actually in the film industry. The guidelines and supporting documents are riddled with spelling and grammatical mistakes, and at one point even the name of the program is bungled, leaving the “Production” out of it.

Of greater concern, points out Thom Fitzgerald, the application form for companies seeking funding requires that “A DVD of the completed Production” be submitted. That’s right: in order to get funding to start a film or TV production, you have to first submit the completed production. 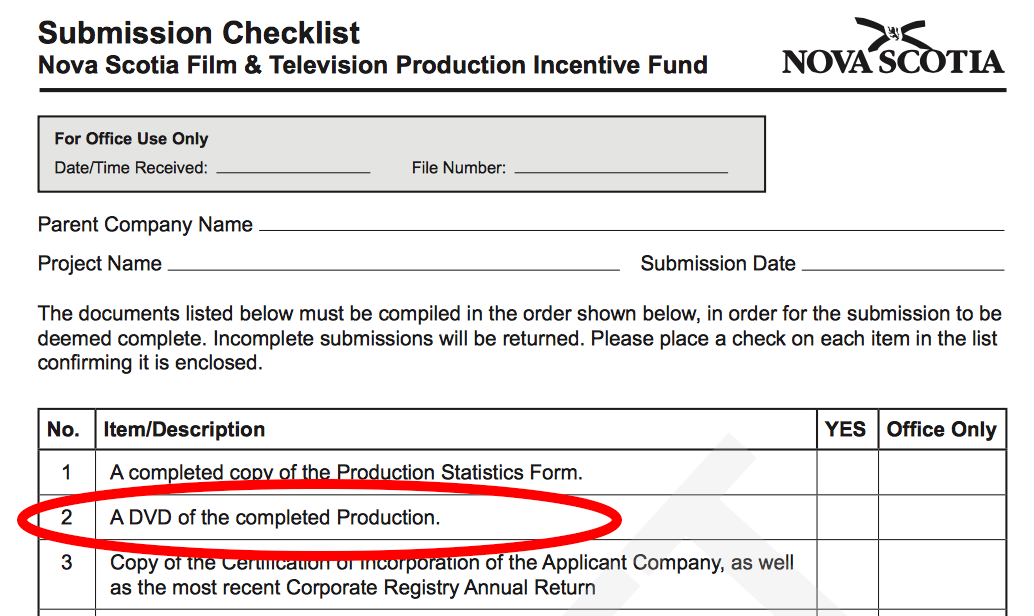 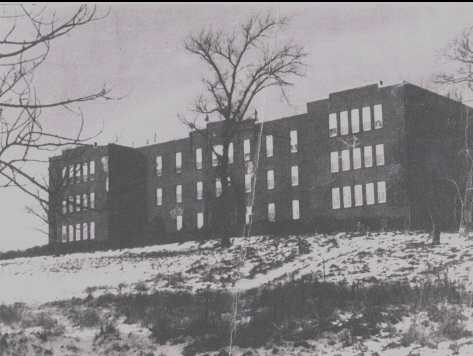 Yesterday, the Truth in Reconciliation Commission released its report on residential schools, which it labelled a “cultural genocide.”

Maloney, who was five years old when she started out at the Shubenacadie school, recalls how children were “strapped” for speaking Mi’kmaq.

But the hardest part, she recalls, were the long, lonely nights, when the young girl felt isolated and her sisters at the school were forbidden from coming to comfort her.

Maloney, who spent 10 years at the school, recalls “waiting for daylight to come and not be afraid.”

Salmons, who was 22 years old when she became one of the 12 nuns teaching at the residential school for 160 students, says she remembers feeling ill-prepared for what she encountered at Shubenacadie.

“We certainly didn’t have any training for dealing with children who were taken from their homes, and who really needed love,” Salmons said.

In fact, she was expressly forbidden from reaching out.

“It was written down: we were not to show affection for the children,” Salmons said.

The CBC’s Shaina Luck interviewed Janice Casimel-Doucette, who “was sexually abused after being placed in a residential school when she was five.”:

After hearing of the report’s findings, Casimel-Doucette feels she and other survivors have been heard. 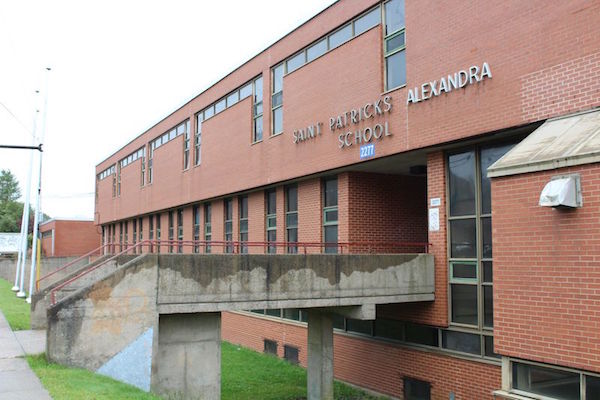 Halifax city council met yesterday, but didn’t do anything interesting.

That’s not quite right. Council met in closed session to discuss the St. Patrick’s–Alexandra school issue, but didn’t make any announcement related to it. I assume that means that there is no change in the plan to sell the property for development.

And there’s a nagging issue related to the Mount Hope–Shearwater Connector Road that I’m trying to write about. Maybe later today. 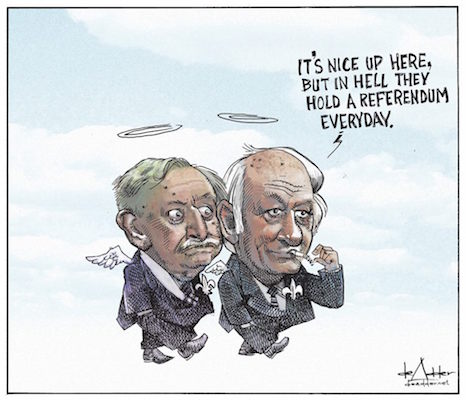 The Irving-owned New Brunswick Newspapers have rejected Mike de Adder’s cartoon on the death of Jacques Parizeau, seen above, because it contains the word “hell.”

The Irving-owned newspaper chain is clearly out of its collective mind. No one is offended by the use of the word “hell.” Rather, the papers should have rejected the cartoon for the improper use of “everyday.” In this context, it should be two words: “every day.” Totally ruined the joke.

Harvey Timmins caught a 15-pound lobster, but somehow no one took a picture of him holding the beast.

Come on, people, we’ve all got cameras in our pockets…and remember: horizontal!

Monday, the Mental Health Foundation of Nova Scotia tweeted the following photo, showing the literal ground-breaking of the urban farm being constructed on the waterfront lot behind the Nova Scotia Hospital: 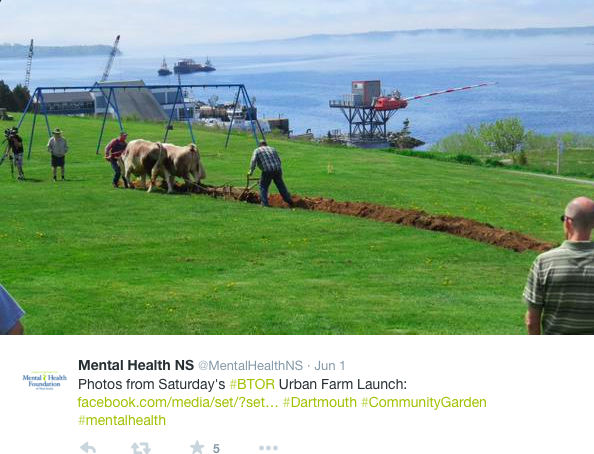 For me the ox + Halifax image evokes a long tradition or convention of rendering the distant city with some picturesque cattle in the foreground. Consider this 1801 engraving by George Parkyns. A group of people are frolicking on the slope of Fort Needham with the spires of the city and Citadel Hill in the distance. To symbolize rural peace and tranquility we have  grazing cattle (and a flock of sheep thrown in for good measure).

Archibald goes on to show a couple of other images of Halifax and cows.

As I’ve long pointed out, talk of Nova Scotia becoming a central shipping destination is delusional. Now, Donham writes “The truth about a container pier for Sydney“:

Nova Scotia already has two container piers, both operating at less than half capacity. The business model conjectured for a third* container pier here — save a day of cheap ocean shipment and replace it with 1500 miles of expensive rail transport — defies logic. It will never happen.

Among other things, it would require hundreds of millions of investment in a decrepit railway that is defunct for lack of business. And for what? So international shippers could land their wares further from market than they could by sailing past Sydney to New York, New Jersey, Baltimore, or Montreal?

The asterisk in the quote is referencing the entirely fictional Maher Melford terminal, a $3 billion project that supposedly will one day be built on the Strait of Canso.

To reiterate, here’s how I explained why the Nova Scotian geography is a curse, not a blessing, for ports:

Existing American megaports—New York, Hampton Roads, Charleston—are investing billions retrofitting their operations to handle the post-Panamax ships, and the rail lines are upgrading like crazy, refitting for double-stacked containers and such. There’s no chance—none—that Canso or Eastport ports can match the investment, and CN will never be able to out compete Norfolk Southern or CSX for the American midwest market. Just ain’t gonna happen.

I find this megaport boosterism in Canada a little sad, really, for how delusional it is.

Adding, I was in Chicago in November, and happened upon the Norfolk Southern intermodal yard on 63rd Street in the south side. It is a huge operation, where double-decker trains arrive from Hampton Roads, Baltimore, and New York, and the containers are shifted to trucks for the next leg of their journey. I watched the continuous stream of trains and trucks for about 20 minutes, and in that 20 minutes saw more containers than Halifax will see in a month. And that was just one of the 21 intermodal terminals in Chicago.

I read the article in the Cape Breton Post last week about Quebec Remparts coach Philippe Boucher complaining about the Quebec league referees at the Memorial Cup.

How ironic is that? Does Boucher not realize Quebec league referees are the ones who played a big role in his team getting to the national championship? Just ask any Cape Breton Screaming Eagles fan or any fan of a Maritime-based team in the Quebec Major Junior Hockey League.

This would make things more just as far as I am concerned.

On another note, I believe our Screaming Eagles team is going to be a top contender next season so fans who don’t already have tickets may want to get them. If this past season is any indication we are going to see great hockey in 2015-16.

Special Events Advisory Committee (9am, City Hall)—the city’s going to pony up $50,000 for a rugby match between Team Canada and the Glasgow Warriors.

I’m not opposed to spending the money, but the staff report relies on a Sport Tourism Economic Assessment Model (STEAM) for economic impact, which is largely discounted as, well, bullshit. Spend the money because we want to see some bad ass rugby, and leave the financial smoke and mirrors for the convention people. 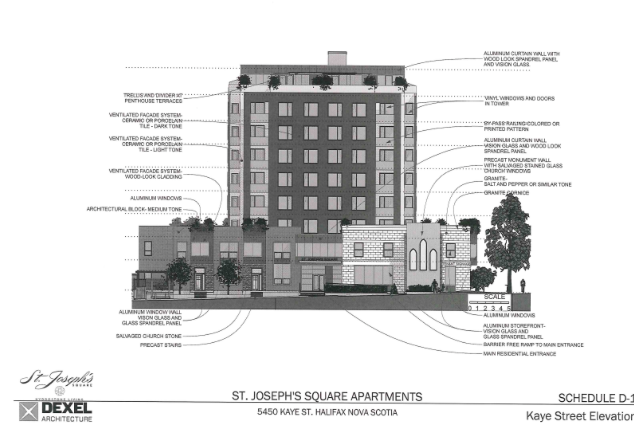 Halifax and West Community Council (6pm, City Hall)—the council will decide whether to allow changes in the nine-storey St. Joseph Square project on Gottingen Street (across from the Hydrostone) that would increase the number of residential units from 83 to 106, move the entrance to the building from Gottingen Street to Kaye Street, and incorporate other changes to the approved project.

North West Planning Advisory Committee (7pm, that four-pad arena with the name of a fucking bank plastered on it)—the committee will look at a proposed subdivision of 17 houses on an extension of Majestic Avenue in Beaver Bank. 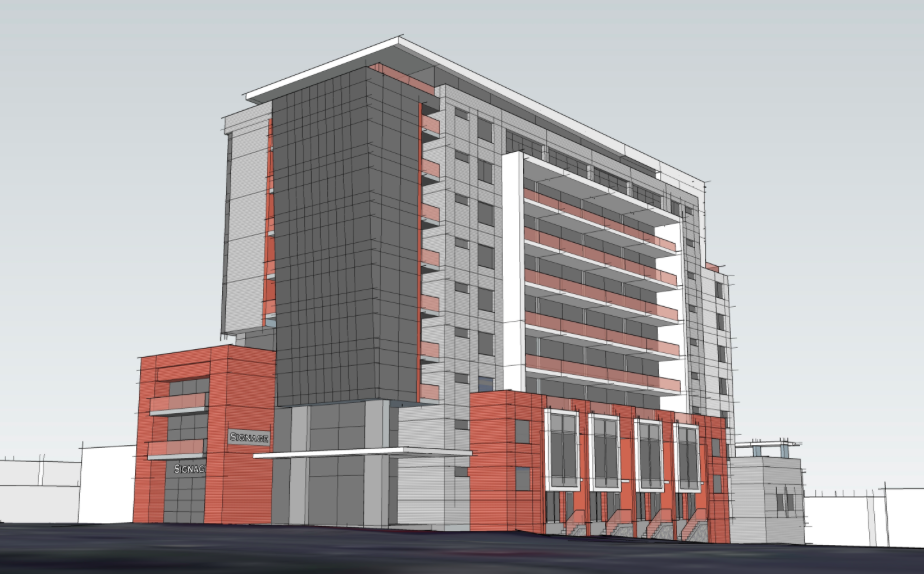 The developer produced this architectural rendering of the proposed Wyse Road apartment building. 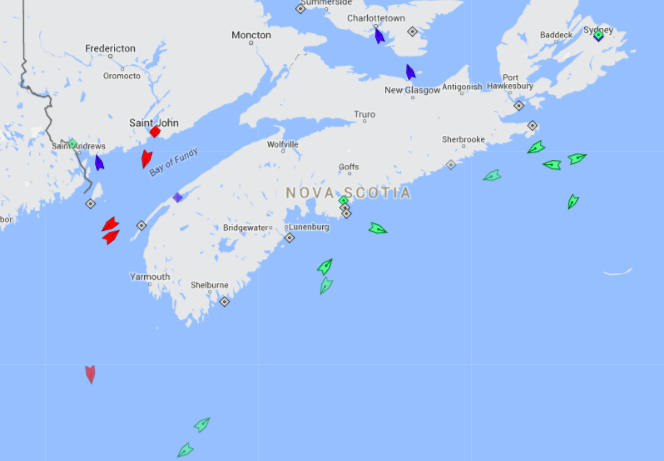 I have no copyeditor this morning. Probably not the best day to ridicule other people’s spelling and grammar.