You are here: Home / Featured / Gnawing away at the vitals of this community, since 1970

This is Erica Butler, filling in for Tim.

As we know from last December when it first appeared on council’s agenda, Halifax’s proposed capital budget leaves A LOT out, especially just about anything to do with the city’s approved Integrated Mobility Plan (IMP), and the final years’ implementation of the transit Moving Forward Together plan. In a meeting on Wednesday, council opted to defer approval of the budget until staff can come back with options on how they might pay for the over $20 million worth of projects that have been left out.

CAO Jacques Dubé has made clear his lack of support for IMP initiatives, which promise to help transform the costly transportation patterns in HRM and save hundreds of millions in infrastructure demands over time. Dubé did mention the IMP to let council know that “we never said there was money available. It was referred to the capital budget for consideration.” Compare that to his comments around the stadium, which is not even included in this capital budget, but to the confusion of many, was included in the slide presentation given by staff. To that item, Dubé explained: “I just want to be clear that the stadium thing is not in the budget. That is a work-in-progress, as you know.  We’re working away trying to nail down a business case and an actual financial model to make that work.”

Star/Metro’s Zane Woodford does a great job of outlining what’s in and out of the budget in two stories this week. Woodford provides an important fact check to Dubé’s explanation of his budget priorities:

And, he said, the municipality needs $4.54 million in the budget to replace the scoreboard at the Scotiabank Centre because the building is hosting the Memorial Cup, the championship tournament for the Canadian Hockey League.

However, according to tender documents seeking a consultant for that project, the earliest a new scoreboard could be put up is this summer, after the Memorial Cup tournament in May.

In another piece Thursday Woodford highlighted a budget line that is included in the capital budget: $7 million for parklands acquisition. Chris Miller, director of Canadian Parks and Wilderness Society Nova Scotia, spoke up on Twitter to commend the $7 million allocation to “purchase and develop parkland” including the Blue Mountain Birch Cove and Shaw Wilderness park, according the the budget document. As much as I share Miller’s enthusiasm for the creation of parks and protected areas, it does make me wonder why Halifax senior management would prioritize straight-up land purchases from developers over say, building the bus lane on Bayer’s Road.

The city has a long-standing commitment to acquire these properties for conservation, going back decades, but has never really invested the sorts of funding that’s required to protect this awesome place. (Photo @flitelab) pic.twitter.com/rSb2LUxNrH

Budget discussions continue today at council. On the agenda are: Legal, Municipal Clerk and External Affairs, Human Resources / Office of Diversity and Inclusion, Finance, Asset Management and ICT, and Office of the Auditor General. You can watch the proceedings live here.

The government of Nova Scotia is refusing to tell citizens how much they are paying private company Bay Ferries to run service between Yarmouth and Maine, despite the recommendation of privacy commissioner Catherine Tully, reports Jean Laroche for the CBC. But hey, in Nova Scotia this is just par for the course, writes Laroche:

Tully, who dismissed [government] reasoning in a 17-page ruling Dec. 17, said the outright rejection of her advice is not unusual.

“You know it’s very frustrating but I think it’s more frustrating for applicants, understandably so,” she said.

“Why go through the review process if in the end a public body can just say … that it doesn’t actually matter what the commissioner says, we’re going to do what we always said we were going to do?”

3. Resistance to transparency is standard operating procedure in Nova Scotia

Moira Donovan for the Coast looks at why a public organization like Develop Nova Scotia (formerly Waterfront Development) requires formal requests under FOIPOP legislation to access something as innocuous as its own public meeting minutes. Writes Donovan,

That might not sound like a big deal. But according to Michael Karanicolas of the Right to Know Coalition of Nova Scotia (and occasional Coast columnist), the fact that an everyday document like these minutes are not available by default “is emblematic of a broader trend and a resistance to transparency.”

Even as many kinds of information become more available and accessible, it continues to be hard for Nova Scotians to get information about their government.

4.  Rolling and strolling for safer streets 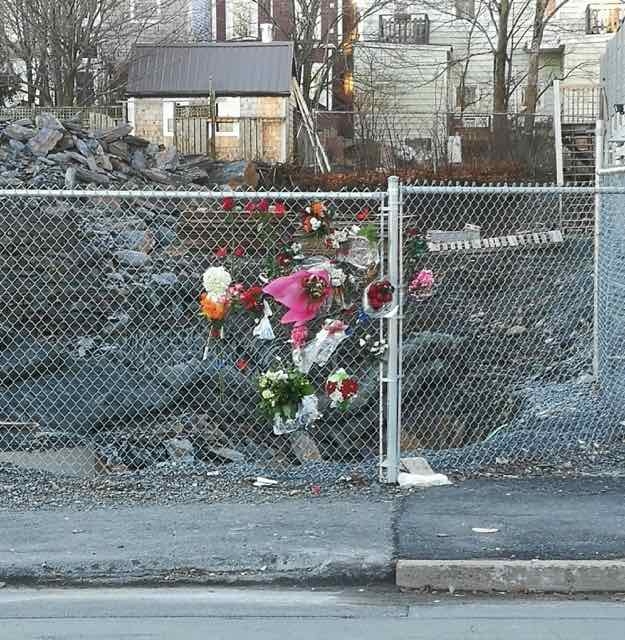 A memorial on Gottingen Street near the location where Willard Comeau was struck by a truck driver while crossing and killed in December. The truck driver was charged with failure to yield in January.  Photo: Erica Butler.

On Saturday at 1pm members of HRM Safe Streets for Everyone are inviting citizens to gather in front of the old Spring Garden Road library for a Roll and Stroll for Safe Streets. The event is especially relevant in light of the recent spate of drivers hitting pedestrians. Twitter user @kyleplans counted seven such collisions in just under 30 hours this week:

Four people were killed while walking around the streets of Halifax in 2018. According to a police report released this week, there were 63 vehicle/bicycle collisions and 191 vehicle/pedestrian collisions between January and November 2018. Police don’t report on the details of vehicle/bicycle collisions, but they did report that just over 63% of the vehicle/pedestrian collisions occurred in crosswalks, and 57% happened with no turning involved. Over the 11 months accounted for in the report, 129 people were injured, eight with “severe” injuries, and 16 with “moderate” injuries.  Police wrote tickets for 12 pedestrians, and 78 drivers.

1. The steep streets of Halifax, then and now

Stephen Archibald notices how the plans for a proposed WTCC addition deal with steep Duke Street, and takes us for a walk through the history of Halifax’s steep street architecture. “For the first 130 years or so, the steepest streets of Halifax were lined with small buildings,” writes Archibald.  Sometimes even those with larger footprints managed to keep some curb appeal. 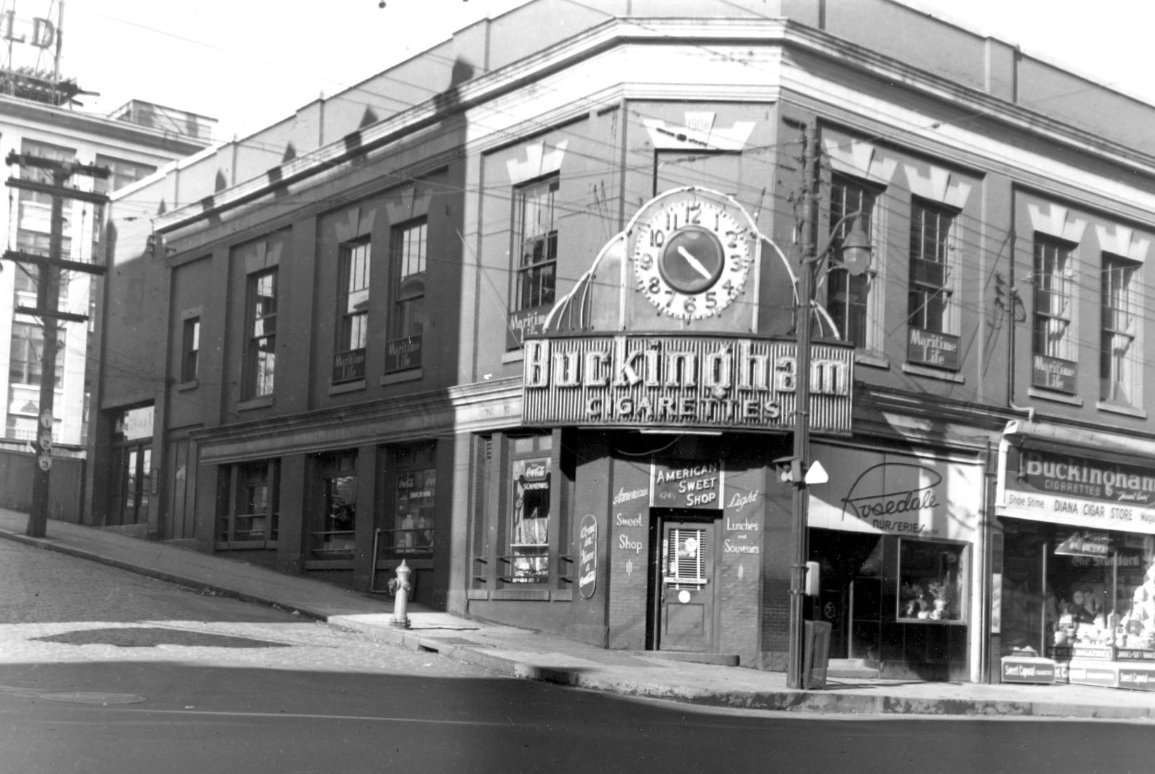 American Sweet Shop. Halifax Municipal Archives, CR2-04.  One of the many examples noticed by Archibald, this building at Sackville and Barrington featuring “a gigantic celebration of time and cigarettes” and was replaced in 1962 by the Canada Permanent building, which now houses Starbucks on its ground floor.

In 1970 the cities of Halifax and Dartmouth invited a panel of experts to spend a week in the cities to help figure out how to build themselves a brighter future. They called the meeting Encounter on the Urban Environment, and Roger Hart at the National Film Board had the good sense to film the whole darn thing.

I don’t know what’s more remarkable, the Encounter itself or Hart’s documentary, which transports you back to 1970 board rooms and public meetings, complete with copious amounts of cigarette smoke and palpable racism and sexism in the air. Stephen Archibald called this film “essential viewing” back in 2017, but you don’t need to have Archibald’s patient eye to appreciate this document of an earlier Halifax.

I’ve long thought that Encounter deserved either a redo, or at least a really good public discussion. A group called Global Shapers has obliged with an event on January 31:  Now & Then: Encounter on Urban Environment – Viewing & Talk. I highly encourage you to watch the whole thing in the comfort of your own home, but Global Shapers will be screening clips of the film, and then hosting a discussion with councillor Lindell Smith and some current-day city planners. 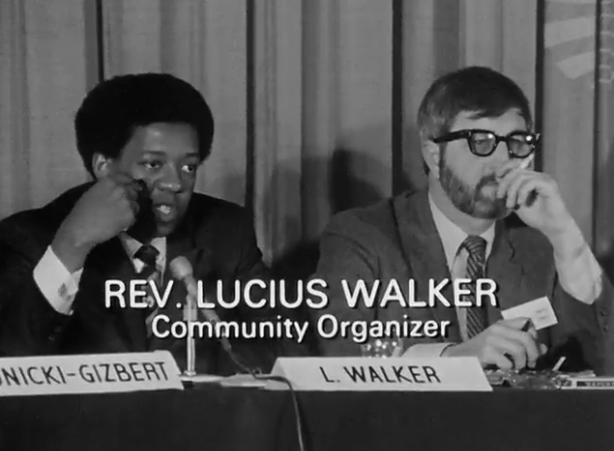 “There is at work, in your community, a destructive mentality, which is overlaid with a conservative (small c), Christian (big C) COMPLACENCY (all caps), which is probably, at this moment, gnawing away at the vitals of this community.” –Panelist Rev. Lucius Walker on the topic of the Halifax Volvo plant with not a single Black employee in 1970. Screen cap from the NFB’s Encounter on the Urban Environment.

Starting Over: An Examination of the Resettlement Experiences of Yazidi Refugees in Canada (Friday, 12pm, MM227) — Lori Wilkinson from the University of Manitoba will speak. From the listing:

Over half the Yazidi arriving to Canada in 2017 are single-female headed households. Trauma is, unfortunately, a common occurrence for the Yazidi; almost all of them have immediate family members who have experienced sexual assault, kidnapping, and murder. As a group, they have also been exposed to inter-generational trauma. In addition to the 2014 genocide in Sinjar Iraq, the Yazidi have survived 73 other genocides over the past 1200 years.

This presentation provides a brief overview of the results of a qualitative study of 35 Yazidi refugees living in Toronto, London, Winnipeg and Calgary. Focus topics include pre-arrival orientation, reception centre experiences, housing needs, language classes, and settlement service use. Initial observations indicate that the low level of educational attainment, lack of English knowledge, together with coping with traumatic experiences, will have an influence on various aspects of the integration of Yazidi refugees. Despite the challenges they face, the Yazidi in Canada and worldwide are working to create new structures that will facilitate the future growth and health of their community. The presentation ends with some recommendations for changes to the resettlement program in Canada that will benefit not only the Yazidi, but other refugees and newcomers.

The rise of the Chinese dragon: Thoughts on doing business with the People’s Republic of China (Friday, 2pm, Keshen-Goodman Library) — Michael Whalen will speak.

Patriarchy as Tyranny in Seventeenth-Century Venice (Friday, 7:30pm, KTS Lecture Hall) — Marguerite Deslauriers from McGill University presents the keynote lecture of the 7th Annual Conference of the Early Modern. A reception will follow in the Senior Common Room.

Weather is coming for Sunday, folks. (Or possibly Monday, Tuesday… you know the drill.)  Plan accordingly.