Yesterday, with the bare minimum of nine votes necessary, Halifax council approved the controversial Wellington Street development proposal. This deserves its own post, which I’ll write after publishing Morning File.

Yesterday, at 6:37pm, Global News published an “exclusive” report saying that “Dalhousie University has rejected a request from Halifax police to share information about the 13 male dentistry students alleged to have posted sexually violent comments on Facebook about their female classmates.”

There was a misunderstanding in what was communicated in a media story on January 13, 2015. Dalhousie will always cooperate with the police on any matter. Of course, Dalhousie will share the requested information with Halifax Regional Police in compliance with the law.

I guess Leadbetter emails reporters when he feels like it—it’s been a week since I asked him for the contract with a crisis communications firm, and I haven’t yet heard boo. Regardless, now the university says it’s cooperating with the police.

A food inspector has told Tanessa Holt that she cannot breastfeed her baby while selling prepackaged food at the Halifax Seaport Market. Remarkably, someone complained, which resulted in a response from the Department of Agriculture:

In an email provided by Holt, food specialist Tracey MacDonald explains to Holt that her breastfeeding is not the problem per se, rather “the issue is surrounding food safety.”

“I would not allow you to breastfeed and then serve customers throughout the day,” writes MacDonald in the email to Holt. “The food safety concern is contamination of food through possible throw up and or feces coming from the baby.”

Holt can’t afford to hire someone to vend for her, so she’s shutting her operation down.

Anne Totten, who bought a ticket in the Dare to Dream Lottery, has filed a complaint with the Alcohol and Gaming Division of Service Nova Scotia. The lottery, which was intended to be a fund-raiser for Bryony House, failed to meet its projected sales. Top prize in the lottery was a “dream home” in Waverley, which homeowner Kris Martin sold to Bryony House for $1,075,000. After the lottery, Martin bought the house back from the winner for $620,000. 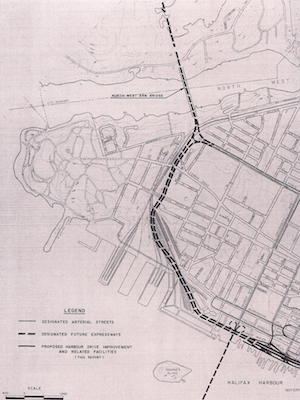 Peter Ziobrowski gives a wonderfully detailed recap of the 1960s fantasy for Harbour Drive, of which the Cogswell Interchange is the last surviving vestige. I was particularly interested in the planning map above, which shows how Harbour Drive would swing up through the South End and then over a bridge across the Northwest Arm. Note the intersection with Robie Street.

This is very close to the plan a few years ago for the approach to a proposed third harbour crossing—a bridge or tunnel from the port over to Woodside, where it would connect to the Circumferential Highway. On the Halifax side, the approach would run in the rail rut, with an intersection at Robie Street, strikingly resembling that from 50 years before. So far as I know, this plan is still kicking around city offices, the official transportation ideal.

Yep, we’ve been getting the urban transportation network wrong for five decades, and counting.

“The nine Councillors that voted for this [Wellington Street] development should be absolutely ashamed of themselves,” writes Sean Gillis:

This building is clearly out of scale with its surrounding, is poorly designed and is blatantly contemptuous of urban design principles. The whole goal is to fill as much of the site as possible with buildings–to hell with the neighbours, the park and the streetscape. Planning is in place so property owners have to consider the neighbours, the park and the streetscape. But that concept of planning wouldn’t let our councillors approve this, so they just threw out the rules. Let’s all just give Wellington Street the finger: at least that would be more honest.

The British newspaper The Guardian talks about Nova Scotia’s “oceans of music.” We also have a connection to Scotland, and a bunch of Titanic victims were buried here. Also, there was a big Explosion. Someone should write a song about the Explosion! (In the writing business, this is what we call “foreshadowing.” Just wait for the exciting denouement!)

Re: “Fill ’er up!” (Jan. 10 story). Full-serve city service stations clearly haven’t moved into the 21st century yet, despite their supposedly good service.

As long as they speak patronizingly of “little old ladies — God love ‘em …” and swear while they’re at it — “… it’s too God damned bad” — I’ll stick with my rural country store here in Lakeville, where I’m treated with courtesy and there’s no extra charge for full-serve.

What’s a little old lady anyway? Does being a hair over five feet qualify as “little”? Does being a vigorous 70-odd qualify as old? And, um, what’s a lady? Most of us are women, last time I checked.

You’ll note that men in the same bracket are merely referred to as “older gentlemen” — no patronizing diminutives required.

North West Community Council (9am, City Hall)—the council will look at the proposed redevelopment of 771 and 773 Bedford Highway, which are now the Traveller’s and Esquire Motels, respectively. The Traveller’s is out of business, but the Esquire will continue to operate. The proposal calls for all the property to be rezoned as commercial. Surprisingly, the development company, United Gulf, doesn’t want to build a gigantic condo overseeing the adjacent waterfront, but rather simply small commercial space, no more than two storeys high.

The council will also discuss flooding on Union Street in Bedford. There are just five houses, at a total assessed value of $750,000, that sit within a 20-year flood plain, and which flooded in December. After the most recent flood, city staff dusted off a 1990s-era proposal for a flood wall, and discovered that the wall would cost $1.5 million to construct. It’d be better, staff says, to simply buy the flooded property out, and there exists a provincial fund to do exactly that, so they’re asking for approval to get that ball rolling.

Budget deliberations (10am, City Hall)—council will begin its annual discussion of the following year’s budget. This process used to be a wild game of back room deals between councillors held frantically every April, after the budget year actually began. Now it’s all managed by staff, with all the excitement removed.

But also, a song! You’d think given this area’s culture of songwriting we’d have dozens or hundreds of songs about the Explosion, but evidently not—I could find only two with a quick YouTube search this morning, and neither of them were, shall we say, well, good. The committee got a letter from Chris Godwin, who along with Susie Godwin is Home Grown, “an Acoustic Folk/Blues Singer/Songwriter Duo.” They’ve written an “original composition song” about the Explosion called “Fire in the Harbour.” I don’t know if the Godwins’ song will pass the “good” measure, but they’ve gotta beat out the Dickholes, who may not be good, but have great head-banging fans:

Regional Watershed Advisory Board (5pm, Helen Creighton Room, Alderney Public Library)—the board will look at a “Concept Subdivision Application” for something called “File # 14900,” but since no one has linked the agenda to a staff report, I have no idea what that’s about.

St. Patrick’s redevelopment—this morning, the city published a request for proposal looking for a consultant to rewrite land use bylaws for the former St. Patrick’s high school site on Quinpool Road. “In order to extract highest and best use from the property,” reads the RFP, “the municipality’s concept for the redevelopment is a high density, mixed-use, residential/retail/commercial complex, which integrates with—and supports—a vibrant urban centre.”

On this date in 1906, the legislature declared the Nova Scotia Wild Blueberry as the “Provincial Berry of the Province.” If you have a problem with that, take your complaint to the Department of Redundancies Department.

William Kowalski is a best-selling writer and independent publisher. He has written five works of literary fiction: Eddie’s Bastard (1999), Somewhere South of Here (2001), The Adventures of Flash Jackson (2003), The Good Neighbor (2004) and The Hundred Hearts (2013). In September 2014, William won the Thomas H. Raddall Atlantic Fiction Award for The Hundred Hearts.

Scallops (11:30am, 5th floor Biology Lounge, LSC)—Helga Guderley will talk on “Scallop escape response strategies: Impact of reproduction and morphology, or, Serendipity and the Impact of Choices in Science.” 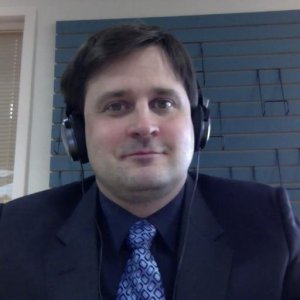 One of the foundations of decision-making since Aristotle is that the mean response of a crowd will produce “wise” answers compared to a smaller group of experts. Famously, James Surowiecki argued that wisdom in a crowd requires such things as diversity of opinion and actor independence, although these circumstances rarely occur naturally. Fortunately, network theory tells us that groups can converge to “wise” opinions after a period of deliberation if the group possesses certain structural features that keep “royal families” from unduly influencing group decisions. Using structural examples from social movements on Twitter, this paper will show some examples of “wise” and “unwise” crowds online and offer some ideas about the implications of each for public policy agenda setting.

Deschamps is giving what looks like a dumbed-down, non-academic version of the talk this Sunday at Podcamp.

Forum on Misogyny (Thursday, 1pm, McInnes Room, Student Union Building)—”A forum co-sponsored by the DSU and the Gender and Women’s Studies program to discuss how we can harness momentum for transformation in our campus community.”

What stuff means (Thursday, 1:30pm, Slonim Conference room, Goldberg Computer Science Building)—Raymond Ng, from the Computer Science at the University of British Columbia, will talk on “Rhetorical Structure Analysis and its Application to Sentiment Summarization.” Here’s the explanation of what that means:

For many business intelligence applications, decision making depends critically on the information contained in all forms of text documents. Rhetorical parsing of documents has been studied for decades. In the first half of this talk, we give an overview of recent advances. In the second half, we present our latest results on using rhetorical structure and relationships for sentiment summarization.

In English, I think that means “computers can figure out what stuff means.” Note how Ng uses the royal “we”? Check out his bio:

In other words, this is the very last dude you want to drink with.

Sea turtles (Thursday, 1pm, Layola, Room 271)—Mike James, a Marine Turtle Ecologist at the Bedford Institute of Oceanography, will talk about “Biology and Conservation of Sea Turtles in Canada.”

My friend Russell Gragg texted me the other day… with his permission I’m simply reposting his texts as sent:

Wanna see an example of pedestrians as second-class citizens?

Here’s a hose being used to drain excess water from the top level of the parking garage on the corner of Cogswell and Barrington. 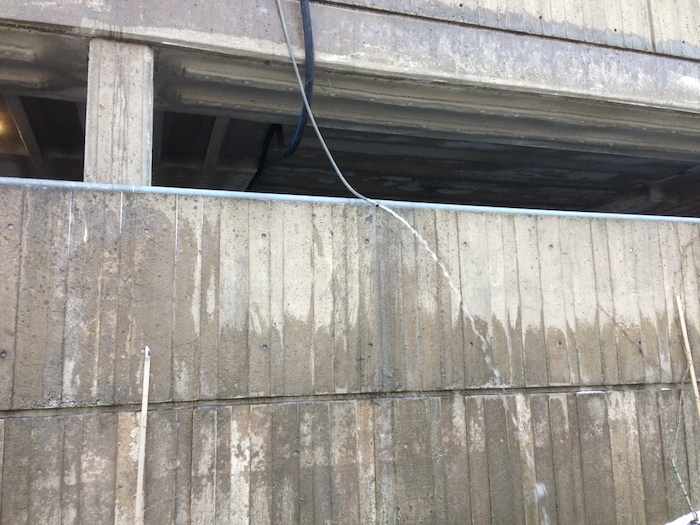 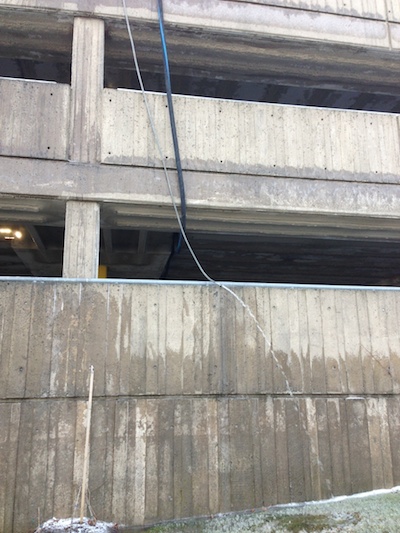 The water then drains onto the grass between the structure and the sidewalk: 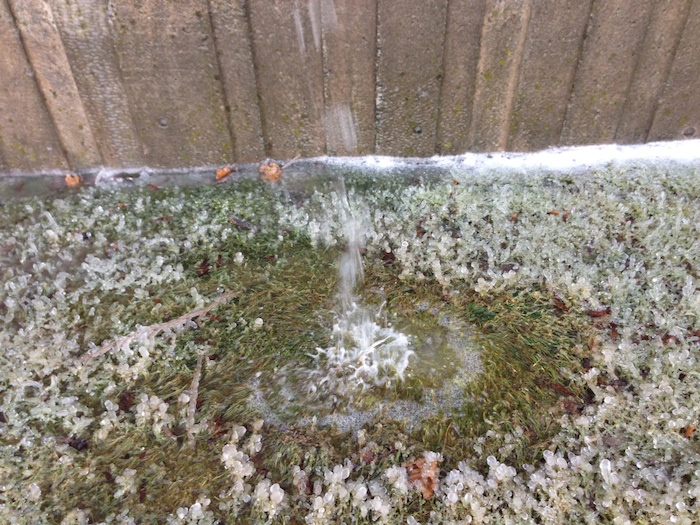 And then flows directly onto the sidewalk, rendering it impassible for pedestrians: 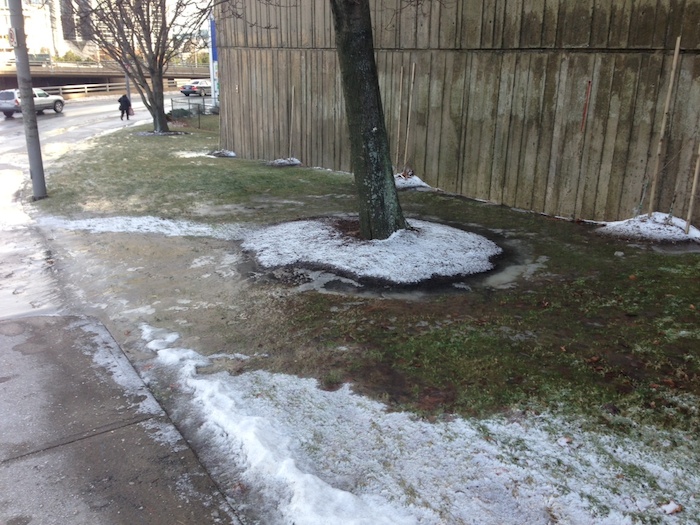 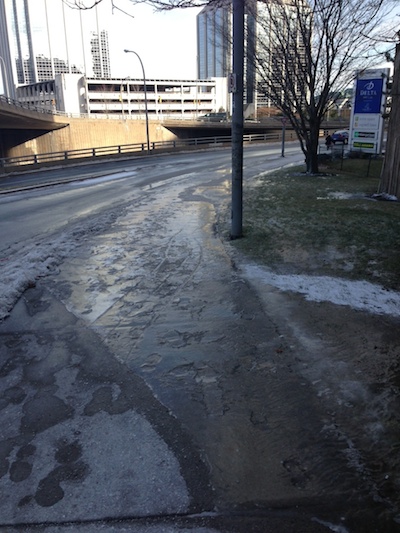 The only way to avoid this 8’x40′ sheet of sheer ice is to start walking on the street.

I’m familiar with this particular problem. I’ve experienced it in past winters, and now avoid this stretch of sidewalk completely, every winter. The sidewalk is simply not available to pedestrians because a parking garage needs to be drained. 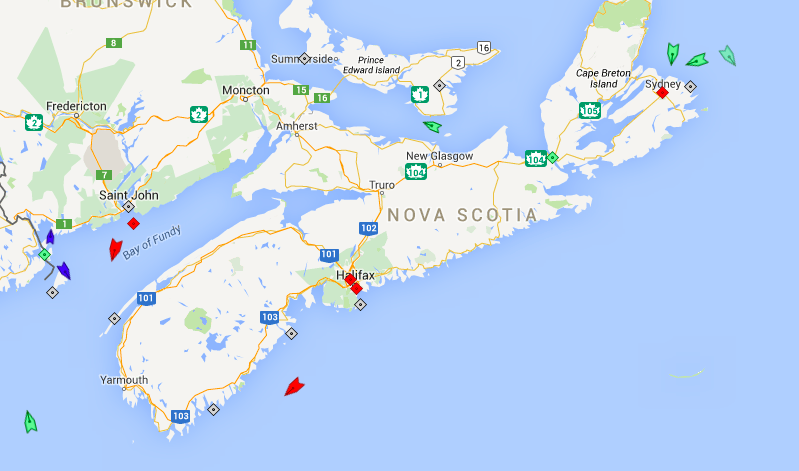 The seas off Nova Scotia, 7:30am Wednesday. Map: marinetraffi.com

Think I’ll go over to Dalhousie today and take a picture of the upside-down “O” in the Dental School sign. If so, I’ll have the exclusive on this tomorrow.