You are here: Home / Featured / Germans in Nova Scotia ‘devastated’ by reports of hard-right extremist colony in Cape Breton 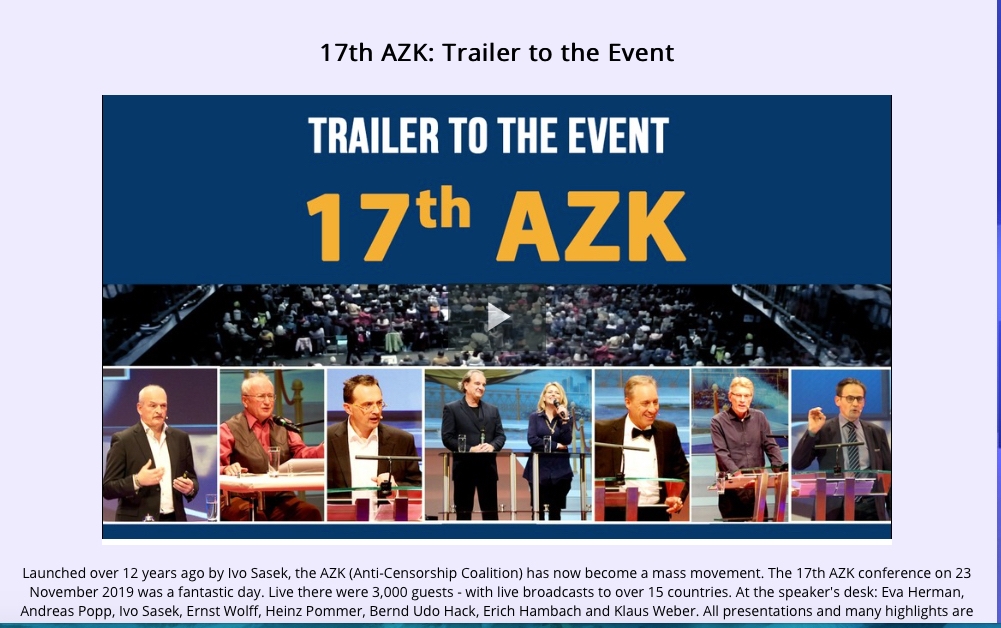 A screenshot from trailer of 2019 AZK conference in Europe, with speakers Andreas Popp and Eva Herman (centre) on the bill as speakers. The AZK (Anti-censorshop Coalition) was founded by extreme right-wing ideologue and conspiracy theorist Ivo Sasek as a forum for, among other things, anti-Semitism and revisionist history, including Holocaust denial.

Recent media reports about conspiracy-theorizing and hard-right extremists buying and selling land in Cape Breton, and setting up a colony of like-minded German-speakers from Europe on the island have shaken up many people in Nova Scotia, none more so than in the German-Canadian community.

The reports have “devastated” her German business clients in Nova Scotia, says Renate Sedlmeier, Department Manager of Business Support Canada at the Canadian German Chamber of Industry and Commerce, which has been helping Germans and German companies get established in Canada since 1968.

“They’re devastated and they’re saddened,” said Sedlmeier in a phone interview with the Halifax Examiner.

My clients have companies in Nova Scotia and they’re really concerned, and they say, “I don’t know what the impact is going to be on my company. This is not good at all because we came here and wanted to be part of the community. We are helping people get jobs. And here we are – we have to discuss this issue. We’re only trying to do good, and now we are getting information [about] [Eva] Herman, [Andreas] Popp, [Frank] Eckhardt … that they’re awful people.”

Sedlmeier says that since the media reports came out, clients in Nova Scotia have been contacting her to say that they “definitely want to distance themselves” from the people involved and their ideologies.

“And so do we in the Chamber,” Sedlmeier adds. “We distance ourselves from these people, what they are saying, what they are doing. We do not want to have anything to do with them. It’s just devastating.”

Last week, Germany’s largest weekly magazine, Der Spiegel, reported at length about the far-right political ideologies of Andreas Popp and Eva Herman and the week-long seminars that their doomsday-prophesizing and conspiracy-theory-promoting think tank, Wissensmanufaktur (Knowledge Creation), have been holding in Cape Breton, and their goal of setting up a colony of like-minded German speakers from Europe. A screen shot from the Herman & Popp video show

However, a well-informed source has told the Halifax Examiner that the CEO of Cape Breton Real Solutions, Juergen Gindner, is a former employee of a company Popp ran in Germany, which shared an address with Wissensmanufaktur. In an episode of the online “Herman and Popp Show,” Popp said he sought out Gindner, and described him as a friend. Popp also said that Gindner, president of Bras d’Or Strategy that deals in gold and silver, is the person he buys his precious metals from, as the Examiner reported here.

So the degree of separation between Wissensmanufaktur and Cape Breton Real Solutions appears minimal, to say the very, very least.

No more seminars at Dundee Resort

Some of the Wissensmanufaktur seminars have been held at the Dundee Resort and Golf Club, a couple of kilometres from Golden View Estate near St. Georges Channel where Popp and Herman live, and where an informed source says their “inner circle” resides.

In a telephone interview, Sonny Grewal, owner and manager of Dundee Resort, told the Examiner that he took it over three years ago, but this is his first year actually operating it.

Asked if Wissensmanufaktur held seminars at the resort in 2019, Grewal said that he was not involved at the time, but he does recall seeing in “the accounting side some invoicing about Cape Breton Real Solutions.” 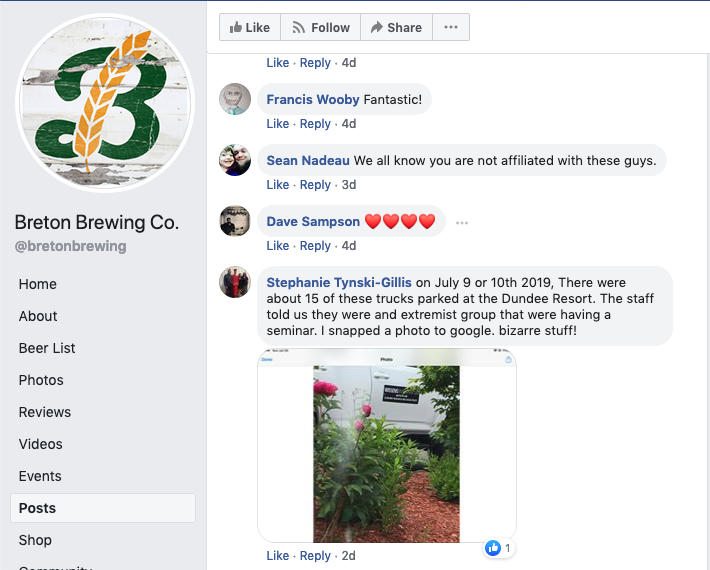 A screenshot of a comment from Stephanie Tynski-Gillis on Breton Brewing Facebook page, in a post which denounced the “alarming video” from Popp and Herman promoting Cape Breton, and showed Breton Brewing products without its “knowledge or consent.” The video has since been made private.

Grewal said the resort did not know the nature of the group, and the arrangement was “strictly business.”

However, he has now seen the articles about Popp and Herman, and he told the Examiner, “Dundee Resort does not endorse any such ideology [that] spreads hate among the community. We will not let anybody use this facility in the future for such calls.”

Asked if that meant there would be no Wissensmanufaktur / Cape Breton Real Solutions seminar at the Dundee Resort and Golf Club this fall, Grewal replied, “Absolutely not. Whether it’s them or somebody else, we do not endorse any of these ideologies.” In 2018, Eckhardt appeared in a German television (ZDF) documentary promoting his “prepper” lifestyle in Germany, dressed nattily with his hair well styled, and showing off his stockpiles of toilet paper and food items. 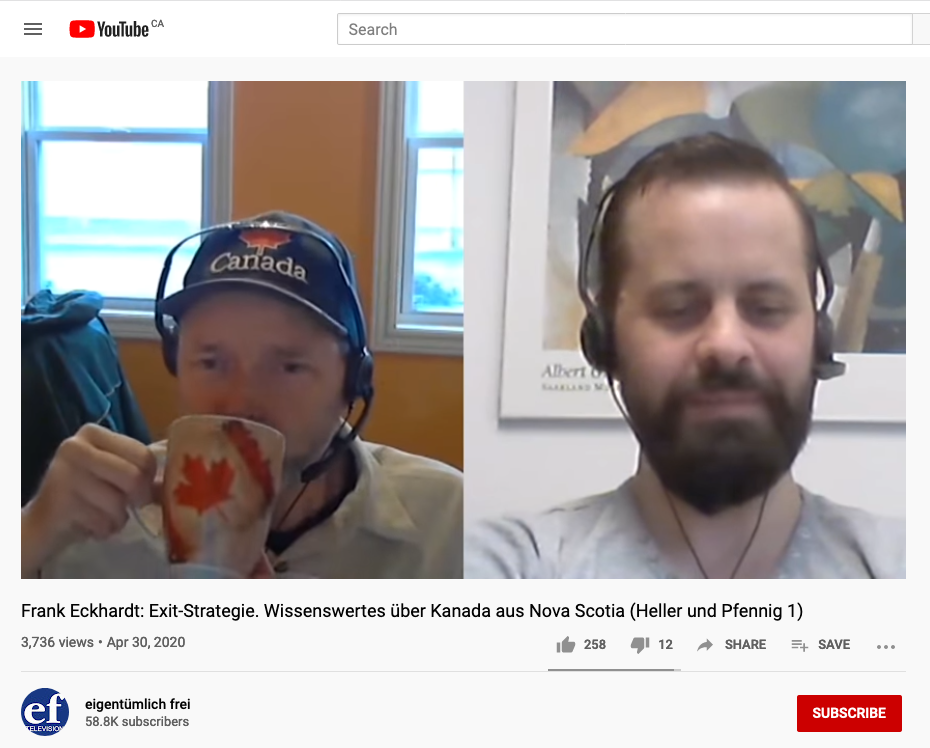 In April this year, Eckardt appeared in an online show hosted by Luis Pazos, wearing a Canada ball cap and sipping out of a coffee cup emblazoned with the Canadian maple leaf, and painting for his host a fanciful and idyllic picture of life in rural Cape Breton.

He tells his host there are 85 programs for immigration in Canada, and that there is a “positive selection” here, unlike Germany where “anyone with a kneecap” can get in if they say the right thing. He also says his “arms dealer” in Canada – the person he buys his hunting guns from – is a Czech.

Related: “Who are the Germans selling land, doomsday ideology, and dreams of a refuge in Cape Breton?“

According to Der Spiegel, Eckhardt is an adherent to the Reichsbuerger [Reich Citizens’] Movement, which rejects the modern German state and government that has developed since the fall of Nazi Germany.

Eckhardt’s F.E. Property signboards in Cape Breton offer “Neusiedler Beratung [advice].” Several German-Canadians have told the Examiner that the term “Neusiedler” [somebody coming to exploit new territory] is a discredited and discarded term because it has connotations from Hitler’s Third Reich. 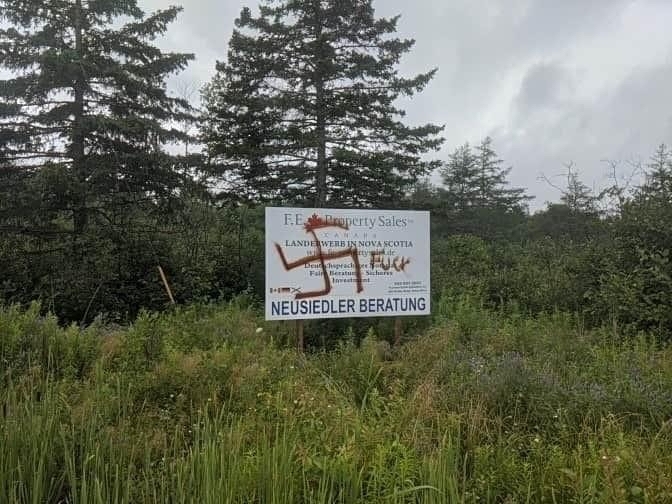 In the past few days, someone painted a swastika on Ekhardt’s F.E. Property Sales signboard in Cape Breton (Contributed)

Renate Sedlmeier told the Halifax Examiner that she has had a couple of complaints about Eckardt over-pricing land for German clients. She advises any German buying land in Cape Breton to do their “due diligence,” as they would in Germany, and to call the Canadian German Chamber of Commerce in advance, if they have questions about land purchasing or immigration to Canada.

But, Sedlmeier laments, “They never call us beforehand.” Rather, they always call after the fact, when it’s too late.

Sedlmeier said that Eckhardt has been “well known since a few years,” and that she thinks the Canadian embassy in Berlin is also aware of him.

The Halifax Examiner has emailed Eckhardt with a list of questions. He replied on July 27 that he will “write everything during the week.” As of publication time, his response had not yet arrived.

As for Andreas Popp and Eva Herman, who was once Germany’s most popular television presenter before she was fired in 2007 for publishing a book praising family policies under the Nazis, and their Wissensmanufaktur organization, Sedlmeier said:

Did I know about this Wissensmanufaktur? Yes, I did. I knew that they existed. But, we didn’t know to what extent, what exactly they are doing there [Cape Breton]. We didn’t have any knowledge of them.

Others in the German-Canadian community react

The Halifax Examiner has spoken with several members of the German-Canadian community who have lived for decades in Cape Breton.

All asked to remain anonymous, and all expressed fear of those who are named in the media reports, calling them “dangerous” and “scary” people.

However, they did agree to answer questions about the situation this puts them in.

I am worried about the international reputation of Nova Scotia and especially Cape Breton Island. I am extremely worried about the effect this will have on our business and tourism. I don’t want Cape Breton to become a hiding and deployment zone for neo-Nazis. I would like to see a public inquiry into this situation, not just the neo-Nazi stuff but also the rest of what is happening [with the land selling at inflated prices]. I hope the authorities will take the proper action.

Another said that is it “very concerning,” and that the German community does not want to be associated with “these people.” He said he would like to see the media distinguish between the buyers of land whom he said are “misled,” and those who are selling land in Cape Breton to Germans, whom he described as the “bad people.” He added:

There needs to be a clear distinction between those people and the average immigrant. One guy who works with me who came only five years is worried that people don’t yet know him and will think he’s like these other people. I would like to see Eckhardt sent to Siberia, or the South Pole.

However, he also said that since the story broke last week they have had a lot of support from their Canadian friends and community in Cape Breton, with far more positive feedback than negative.

Another person who met with the Examiner said he hopes that anyone in Nova Scotia and the Maritimes who has collaborated with Popp and Herman, and who remains unaware of who they are — what ideologies they are promoting and what they are doing in Canada — will be informed about them by the media coverage. In his words: “They need to know.”

He also said that the article in Der Spiegel was very accurate, but that there is much more that needs to be told about the people involved.