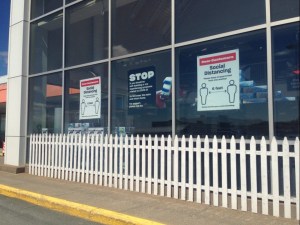 Grocery stores have made a number of safety measures, including asking shoppers to adhere to social distancing rules. Photo: Suzanne Rent

As a grocery store employee, Aaron (we’re not using his real name so he doesn’t face disciplinary action from his employer) is an essential worker, but like many retail employees, he’s not being treated that way.

COVID-19 has exposed the importance of frontline workers in a crisis, but also how those workers are treated, crisis or not. Several weeks into the crisis, Aaron says he is glad some positive steps have been taken to protect him and his colleagues at the store, but he says they’re not enough.

“I feel safer, but also somewhat resigned since so much of it is beyond my control,” he says. “If I become sick now because of the stress and lack of appropriate precautions, I’ve tried my best.”

Aaron says there are Plexiglass barriers at the checkouts and staff have access to masks and gloves, but weren’t given training on how to properly wear or use them. “Getting a mask every day has been a bit of a hassle,” he says. “I’ve had to take initiative. You have to go ask a manager, ‘Can I have a mask?’” He says he was told he uses too many gloves and instead to use one pair and clean them with hand sanitizers.

Aaron says he’s enjoying the reduced store hours and would like to see that as a permanent change. “I have never worked before 10am or after 8pm,” he says.

Aaron works part-time at the store and says most of the workers there only have part-time status. He estimates there are fewer than 20 workers who are full-time, and most of those are managers. He got a raise, too, for working during a pandemic, but says it’s not enough. “As far as I’m concerned, that’s what I should have been making before I was at risk with my life,” he says. “They could always afford to pay us this.” 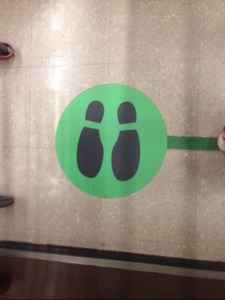 Markers in grocery store aisles remind customers where to stand while waiting to pay for their grocery orders. Photo: Suzanne Rent

The COVID-19 pandemic has been good to Loblaws. Sheila Block, a senior economist with the Ontario office of the Canadian Centre for Policy Alternatives, writes in The Star that in the first quarter of 2020, the grocer estimates the pandemic increased its revenue by $751 million.

In May 2018, Loblaw shareholders rejected a proposal that would have given employees with the grocery chain a living wage. According to a report from The Star, Loblaw’s board of directors suggested shareholders vote against the proposal, saying it oversimplified compensation practices and wouldn’t give Loblaw the flexibility it needed.

The pandemic has benefited Sobeys, too. On April 15, Graeme Benjamin with Global reported that Sobeys saw an increase in sales of 37% over the four weeks of the pandemic starting March 8.

Aaron says some of the staff have gone above and beyond to help each other and there’s always good food in the break room. And some workers have refused to do specific jobs when asked — “I think people have become somewhat braver under the circumstances because we feel less dispensable,” he says.

The store has the arrows and lines on the floor to direct customers, but Aaron says those are frustrating to enforce and that work has been left to the lowest-paid staff in the store. “We haven’t been told what we’re allowed to say to customers breaking those rules,” he says. “’We’ve been left to our own devices.”

He says some customers aren’t following the guideline about only one member of a family shopping either. He says he sees a lot of couples in the store. Still, he says maybe one person needs help carrying the groceries. “I want to give people the benefit of the doubt that they’re aren’t malicious,” he says. “A lot of people haven’t thought of the additional risk they create by crowding the store with people.”

Aaron says while there have been many changes in the store, most of the customers have been “perfect and lovely… I have people come in and saying ‘thank you for working,’” he says.  But he’s had a few frustrating encounters, including being called stupid when he asked one customer to follow the arrows on the floor in the aisles. When another customer started screaming at him, he just turned around and walked away. But he says dealing with rude customers is “same as normal and par for the course.” 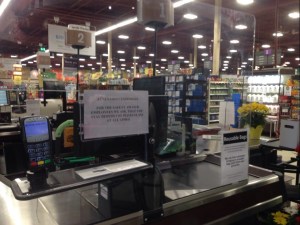 Plexiglass shields at the checkouts are standard at grocery stores. Photo: Suzanne Rent

Aaron says while many customers have been grateful and supportive, labelling grocery store workers as “heroes” is a backhanded compliment. “In terms of the business itself, I don’t feel like I’m being rewarded for something great. We’re not heroes; we’re hashtags,” he says. “We’re being put in a position where we’re at risk of being infected and we can’t walk away from it.”

If Aaron or his colleagues left the job because they didn’t feel safe working at the store, they wouldn’t qualify for the Canadian Emergency Response Benefit. Still, what they’re earning is similar to or not much more than what CERB pays its recipients. As a part-time worker, Aaron doesn’t get sick days or benefits. He works a second job. He says hearing about positive cases that were found at other grocery stores was incredibly stressful for him and his colleagues. He says they only heard about some of the cases through the media. “To some degree, the adrenaline is starting to wear off,” he says. “We have become a bit accustomed that we are in the firing line and there’s not much we can do about it.”

When he’s not working, Aaron goes for walks or works at his second job. He can’t see his partner, who doesn’t live with him, but they try to meet up for appropriately physically distanced walks when they can.

He says there are ways customers can support grocery store workers now. “I appreciate the thank-yous but I’d rather you write angry letters to the newspaper that we be paid more and get more protections,” he says. “You should be aware that for a lot of us this is bringing to the fore pre-existing and rooted problems that need to be addressed. At the end of the day, our working conditions need to be changed and no amount of social accolades will change anything.”

Aaron is optimistic and determined about what can be done for our workforce based on what we learned about how it works in a crisis.

“I hope that this helps people see that the current organization of work is not well suited to the challenges we face as a society,” he says. “This is a point of inspiration for change and that when this is over people will come out wanting to fight like hell.”