Pictou District RCMP say they have arrested four men following a report of an ugly incident on the waters off Pictou Landing First Nation.

According to an RCMP press release, at about 5:30 p.m. on December 13, “Pictou District RCMP responded to a report of shots fired in the Northumberland Straight near Pictou Landing First Nation.” It reads:

At Approximately 5:30 p.m. on December 13, Pictou District RCMP responded to a report of shots fired in the Northumberland Straight near Pictou Landing First Nation. Upon arrival, members learned that a man had observed the crew of a fishing vessel removing lobster traps from the water. The man then approached the fishing vessel in a small boat. As he approached, the fishing vessel accelerated toward him and shots were fired from the vessel. The man was not injured and returned to port.

Last evening, a 51-year-old man from Pictou County turned himself in and was arrested without incident.

This morning, three men from Pictou County were arrested in Caribou without incident.

The investigation is ongoing. This is believed to be an isolated incident and there is no threat to the public.

RCMP spokesperson Lisa Croteau told the Examiner in an email Monday afternoon that “no charges have been laid at this time.”

When Pictou Landing First Nation Chief Andrea Paul broke the news of the incident on her Facebook page on Sunday afternoon, the Band’s Netukulimk Livelihood Fishery in the Northumberland Strait was just hours away from its seasonal end on December 14. 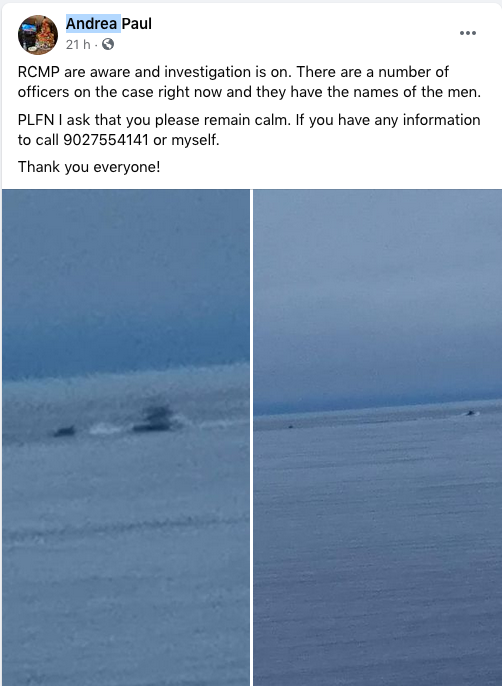 Today – actually about 15 minutes ago a white male (3 of them actually) were seen pulling up our Netukulimk Fishing traps. Our fisher went out to see who it was. They SHOT at him!!! They were there with a rifle and shot at my community member!!! My fisher was alone. This is wrong on so many levels and it is not going to be ignored.

She asked the PLFN community to “please remain calm.”

In a Facebook update on Monday, Paul explained that the “RCMP didn’t issue any public safety alerts because it was felt that this was an isolated issue and that there was no danger to public.”

“They were on scene all night (responded very quickly and from a few departments). There were also officers in the community patrolling all evening,” Paul said. “There is an on-going investigation as this is a serious matter. If anyone has any further information to share regarding this issue please contact the RCMP at 902-755-4141.”

Paul thanked the RCMP for “their updates and their prompt response to this serious issue.”

In an interview with the Halifax Examiner, lobster fisherman and interim president of the Northumberland Fishermen’s Association, Dennis McGee, stated that his organization “does not condone violence on or off the water.”

McGee says that no one can understand why someone would do “something so stupid,” noting that Pictou Landing First Nation would be pulling up its moderate livelihood lobster traps today, which is the end of its Netukulimk fishery season.

“It doesn’t solve anything, and I don’t want to see anybody get hurt over something so stupid.”