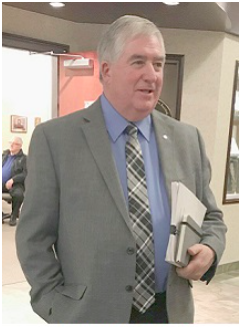 The Richmond County council fired Chief Administrative Officer Kent MacIntyre during a closed session meeting on April 1, 2019. The vote was three to two, with councillors Brian Marchand, Gilbert Boucher, and Alvin Martell voting in favour of firing, and councillors Jason MacLean and TK Goyetche voting against.

“MacIntyre was named CAO of the Municipality of the County of Richmond in late 2017,” reported Yvonne Leblanc-Smith for the CBC the next day:

The appointment came a year after an expense scandal where it was revealed some officials were spending public money on alcohol and questionable travel and food expenses.

The former CAO, Warren Olsen, had been singled out and heavily criticized in an ombudsman report. In one case, Olsen charged $582 on his municipal credit card for back-to-back nights at adult entertainment clubs in Houston. He resigned a month after the report was made public.

The budget issue involving MacIntyre was expected to come up at an audit committee meeting scheduled for Wednesday. Instead, councillors began discussing the matter during Monday’s meeting.

In protest of the vote to fire MacIntyre, MacLean subsequently resigned his position as County Warden, but stayed on as councillor. He issued a statement.

In a statement of claim filed with the Supreme Court yesterday, MacIntyre said he moved to Richmond to take the CAO job under a five-year contract that paid him $131,444 annually.

At the April 1 meeting, reads the claim, Boucher introduced the motion to fire MacIntyre, which was seconded by Martell. Marchand voted in favour as well. The claim outlines discussion during the closed session meeting:

After the vote, MacIntyre was escorted to his office to collect his personal items and then escorted out of the building.

The council had an emergency meeting on April 4, at which Marchand made public comments about MacIntyre having had created “roadblocks” to Marchand’s requests for information about the account. At that meeting, Boucher nominated an Interim CAO to replace MacIntyre, a motion that passed on the votes of Martell and Marchand.

“After getting clarification from the deputy warden [Brian Marchand] that [Don] Marchand was already approached to accept the position, Warden Jason MacLean questioned why he was left out of the conversation,” reported Jake Boudrot for the Port Hawkesbury Reporter:

“So what I’m hearing is that the warden of the council was not made aware of that discussion, nor was part of that discussion and is finding out that information — after he was has [sic] approached — for the first time tonight?” MacLean asked.

MacIntyre references that statement in his claim, which continues:

Despite publicly announcing the reasons for MacIntyre’s termination — openly reiterating cause for the termination — Richmond Council decided at that meeting of April 4, 2019, to prepare a letter to MacIntyre that his termination had been without cause. In response to a question from a member of the public, as reported by CBC News on April 5, 2019, Marchand stated that Richmond would allege the termination was “without cause” to avoid a defamation suit.

In his claim, MacIntyre says this amounts to a “post facto attempt to recharacterize the dismissal,” but it fails because MacIntyre had already been fired and public statements had been made saying that he had been fired for cause. And those statements are false, he says; the councillors had defamed him; “this was libel.”

As a result, says MacIntyre in his claim, his professional reputation has been destroyed. He’s applied many times for CAO and senior management positions but hasn’t been called back for an interview. Presumably, prospective employers google his name and find the statements against him in Richmond County.

About that professional reputation…

MacIntyre is tied up in the economic development world. He got an MBA at Saint Mary’s University, and then started his career at the Cape Breton Development Corporation. He also served as an alderman for the City of Sydney, and as acting mayor for a spell.

He became CEO of Seagull Pewter in Pugwash in 1996, and the next year the company received a $517,590 ACOA loan to “engage consultant to facilitate corporate change,” and boy would I love to learn who that consultant was.

Along the way, MacIntyre taught part-time at St. Mary’s University. In 2002, he became CEO of Novapet, a plastics recycling facility in Amherst. In 2004, he became president of Tintamarre Homes in New Brunswick.

From June 2008 to April 2009, MacIntyre was Vice President of Operations at Acadian Seaplants. I don’t know if it’s related, but just at the time Acadian Seaplants received a $1,693,658 ACOA loan, among other ACOA funding.

In 2009, MacIntyre was named general manager of Saint John Development Corporation. By 2016, that agency was running into multiple problems. Its computer system was hacked. The Saint John city council was giving the agency grief about delays on waterfront projects. In response to a CBC freedom of information request related to the failed Marco Polo project — “a model replica of Saint John’s most famous ship has been languishing in storage for years” — MacIntyre said that even though the Saint John Development Corporation was entirely funded by public money (including $200,000 from ACOA), it was not subject to the public records act.

He took the Richmond job the next year.

The allegations in MacIntyre’s statement of claim have not been tested in court. 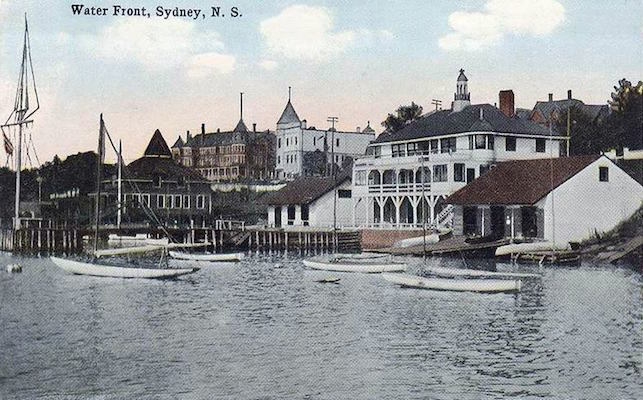 The Royal Cape Breton Yacht Club (RCBYC) was a historic (113 years old) building on the Sydney waterfront that burned to the ground on May 3, 2013.

Mary Campbell recounts the events just before and after the fire, and finds the circumstances of the fire, well suspicious. A 34-year-old of “diminished mental capacity” was arrested for arson, but a judge threw out the man’s confession because it was “the result of an inducement and therefore not given freely or voluntarily.”

The fire came just as the Enterprise Cape Breton Corporation (which later crumbled due to a patronage scandal and was taken over the Atlantic Canada Opportunities Agency) was deciding against providing funding for restoration of the structure and was simultaneously tripping over itself to provide $5 million in funding for the Ben Eoin project on the Bras d’Or Lakes — what Campbell characterizes as “a pointless marina and a road to nowhere in Ben Eoin.”

Campbell filed a freedom of information request for documents related to Ben Eoin and RCBYC way back in 2016, and finally received a response this week. The document trail and Campbell’s telling of it is at the same time fascinating, farcical, and frustrating.

Campbell’s research has unveiled a lot of very questionable activity, and she’s laid out all the dots that need connecting. She’s still working on that last part, but she’s brought us right to the point. This is important reporting.

There’s something deeply unsatisfying about this story — the police investigation into the cause of the fire petered out; the Auditor General’s examination of the ECBC’s marina dealings petered out; ECBC itself petered out (well, no, it kind of exploded, thanks to [John] Lynn, who got himself fired not for his marina investments but for his patronage hires, and took the agency down with him).

But there have to be some lessons here — especially since so many of the same people involved with all these questionable decisions are still out there, influencing what happens on the Sydney (and North Sydney) waterfronts, making private decisions about public assets and pocketing public money for their efforts.

But I’m not going to try and draw lessons yet.

First, I’m going to get my hands on the police and fire reports about the yacht club fire and see if there are any more facts to be learned, so stay tuned.

Click here to read “In the Ashes of the Royal Cape Breton Yacht Club.”

Halifax police constable Laurence Gary Basso has been found guilty of assault causing bodily harm for punching a homeless man outside the Metro Turning Point shelter in February 2018. A video of the attack was released to the media after the verdict, and Elizabeth Chiu of CBC posted it to Twitter:

This is the video in real-time. The judge permitted its release now that she’s made her ruling. pic.twitter.com/DYgpI0Jf4T

Appeals Standing Committee (Thursday , 10am, City Hall) — Lesianu Hweld is appealing the denial of a renewal of his taxi driving permit. I wrote about this yesterday. 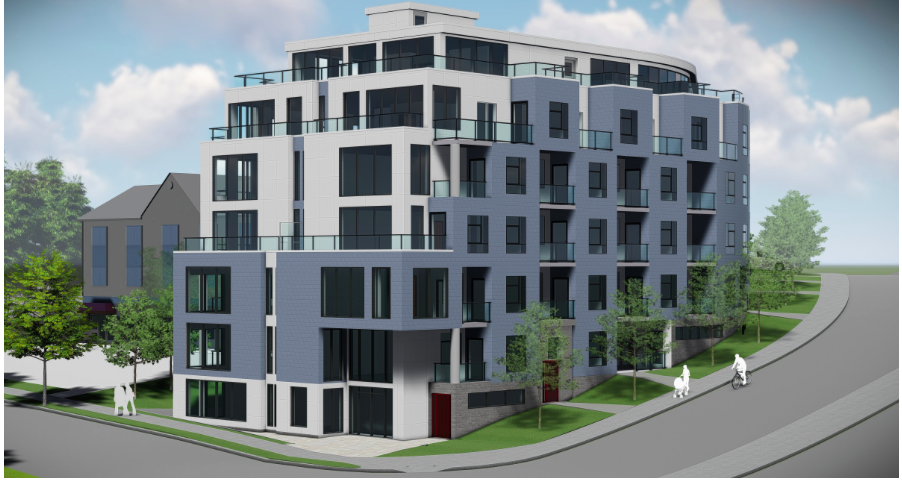 Public Information Meeting – Case 22140 (Thursday, 7pm, North Woodside Community Centre, Dartmouth) — M&K Golden Developments Inc, whose president is Joseph Sadek, a Psychiatry prof at Dal, wants to build a seven-storey, 50-unit apartment building at the corner of Pleasant Street and Chadwick Street in Dartmouth, just up from the courthouse and the community college. Judging by the architectural renderings of the proposal (above), Sadek is proposing to bury the electrical wires and rent to only super, super white people.

“Change Your World”: The Science of Resilience and the True Path to Success(Thursday, 6:30pm, Halifax Central Library) — public lecture and book launch by Michael Ungar.

As of 7am this morning, the Alakai ferry is still in Charleston, South Carolina.

I’m off to take photos for an article we’re publishing later today.