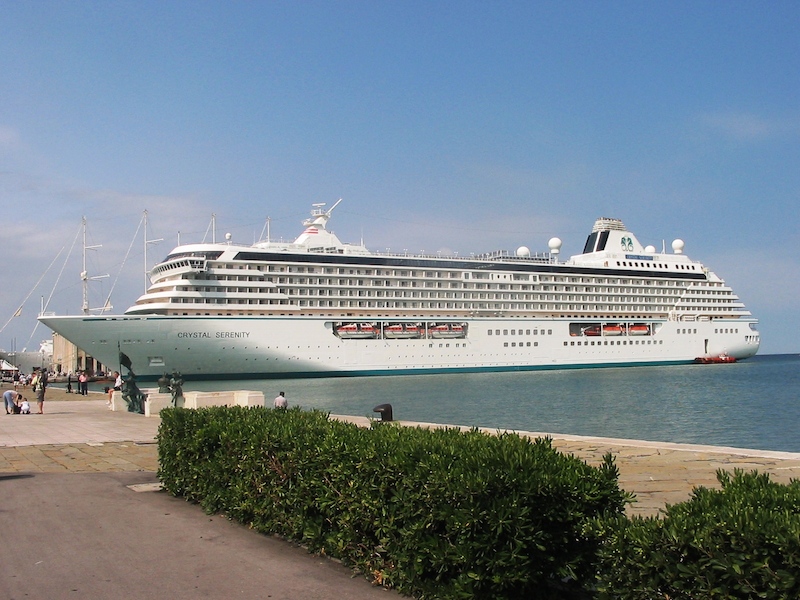 The Crystal Serenity, in port today, has been given an “F” grade by Friends of the Earth. Photo: bert76 via Wikimedia Commons

Due to warming waters, the lobster catch is exploding. But with changes to the temporary foreign workers program, processors don’t have enough workers to, er, process the catch. “Unless we can find some way through this, (lobster processing companies) have no other alternative but to reduce their capacity,” Jerry Amirault of the Lobster Processors Association told the Chronicle Herald. Hmmm. The Halifax Examiner Think Tank has this morning commissioned a study to “find some way” to find more workers. After extensive consultations with a single cup of coffee, the think tank has found a solution.

Gordon Fraser has been slaughtering turkeys in Millford for decades, without incident, but the turkey board wants to shut him down. The Chronicle Herald hasn’t yet been able to hear the board’s side of the story, but it certainly looks like a case of unthinking bureaucracy run amok. All that aside, good on reporter Francis Campbell for the money quote from Fraser: “I’m going to stick my neck out.”

The Nova Scotia Federation of Labour, the Nova Scotia Government and General Employees Union, the Canadian Union of Public Employees, the Nova Scotia Nurses Union, and Unifor have filed suit against the government, seeking the overturn of Bill 37, which outlawed strikes by health care workers, reports the CBC.

Gifford and Christine Watkins find a bunch of 19th century nautical maps in the floorboards of their Yarmouth house.

Stephen Archibald, who last week showed us Open Hearth Park in Sydney, today takes us around the industrial areas of Cape Breton generally, comparing what he sees now to what he saw when he visited back “around 1970,” including a chip truck, excuse me, food truck, which is still operating. “This food truck incunabulum has been working in Glace Bay since 1946,” says Archibald. “And no surprise the chips were great.” Top photo is from 1970, bottom photo from last week: 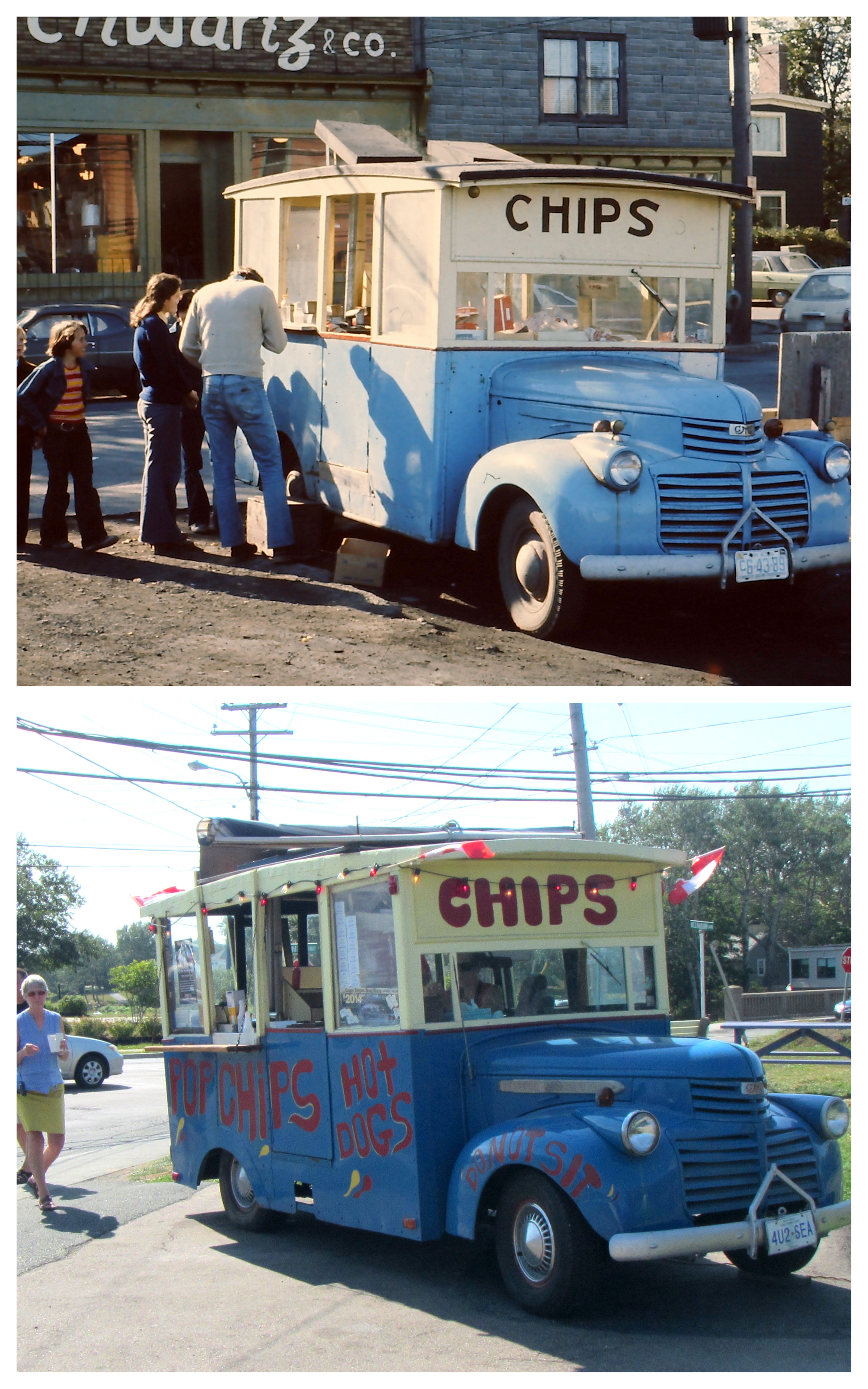 Incidentally, Archibald makes a quick reference to the bootleggers of the 1970s: “this one for beer, that for rum, buddy if you wanted to sit and drink and quwherefellow if you had been banded everywhere else.” This subject fascinates me. Nova Scotia still has a bootlegger culture that I’ve not seen elsewhere. I have a buddy who is a regular visitor to the bootleggers in a certain rural area, and there are at least four bootleggers operating in the north end of Halifax. Somebody should write something about this.

Zack Metcalfe, of the Sierra Club, says sensible stuff about the anti-fracking movement.

3. Graham Steele and the failure of politics

I’ve written a review of Graham Steele’s book, What I Learned About Politics. The review is behind the Examiner’s pay wall and so available only to paid subscribers. To purchase a subscription, click here.

Well isn’t this embarrassing. You know that Audit and Finance Committee meeting I told you about yesterday? It’s actually scheduled for today, 10am at City Hall. I apologize if anyone showed up at the wrong time, and for my sins I will go and actually report on the meeting.

Public Accounts (9am, Province House)—On the agenda are the Workers Compensation Board and Safety Association funding.

Poland (12:30pm, University Hall, Macdonald Building)—Marcin Bosacki, the Polish ambassador to Canada, will speak on the changes and challenges faced by Poland in the years since the collapse of the Soviet Union. 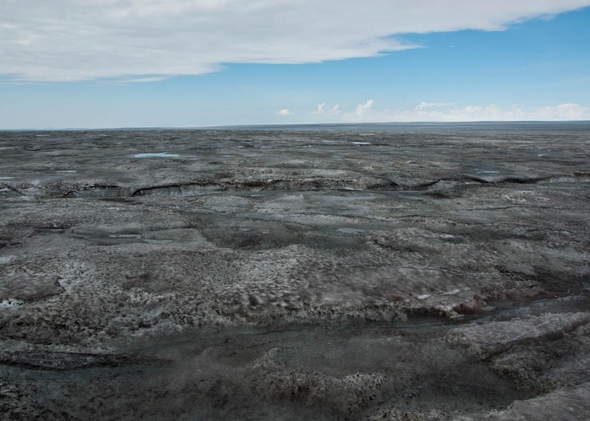 The ice pack in Greenland this year is black. Reports Slate’s Eric Holthaus:

There are several potential explanations for what’s going on here. The most likely is that some combination of increasingly infrequent summer snowstorms, wind-blown dust, microbial activity, and forest fire soot led to this year’s exceptionally dark ice. A more ominous possibility is that what we’re seeing is the start of a cascading feedback loop tied to global warming. [Climate scientist Jason] Box mentions this summer’s mysterious Siberian holes and offshore methane bubbles as evidence that the Arctic can quickly change in unpredictable ways.

This year, Greenland’s ice sheet was the darkest Box (or anyone else) has ever measured. Box gives the stunning stats: “In 2014 the ice sheet is precisely 5.6 percent darker, producing an additional absorption of energy equivalent with roughly twice the US annual electricity consumption.”

Perhaps coincidentally, 2014 will also be the year with the highest number of forest fires ever measured in Arctic.

Since this is the high season for cruise ships calling in Halifax, we’ll take a periodic look at the record of some of the ships. The boats are very often floating environmental disaster scenes. Shouldn’t this concern us?

Today, the Crystal Serenity is in port. It has been awarded an “F” grade by Friends of the Earth, which comments:

Crystal Cruises is a subsidiary of a Japanese shipping company founded in 1998 with its headquarters in California. Crystal operates two cruise ships worldwide—the Crystal Serenity and the Crystal Symphony—which are designed to carry between 1,500 and 1,700 passengers and crew. Crystal ships were banned from entering the Port of Monterey, California for 15 years after one of its former ships, the Crystal Harmony, discharged untreated graywater, treated sewage and oily bilge into the Monterey Bay National Marine Sanctuary in 2003. These discharges were made despite the company’s promise not to discharge any wastewater into the Bay.

Currently, neither of Crystal’s two cruise ships has installed an advanced sewage treatment system, resulting in a grade of F for the company’s 0 percent sewage treatment score. In determining the air pollution reduction grade for each cruise line, only ships that dock at a port that currently has shoreside power facilities (thereby avoiding burning dirty fuel in port) were considered. In total, none of Crystal’s ships that dock at a port with shoreside power are plug-in capable, giving the company an F in this category. While both Crystal ships traveled to Alaska from 2010 to 2012, it chose to discharge sewage from those ships outside of Alaskan waters, thereby avoiding Alaska’s strong water quality standards, giving it an ‘N/A’ for water quality compliance in Alaska.

The Balmoral, which left Halifax last night, is skipping a scheduled stop in Shelburne because the harbour pilot is on vacation.

The city has issued a tender offer this morning for a builder for the last piece of the crosstown connector bicycle route. This piece of the route connects Windsor Street to Quinpool road, next to the St. Pat’s High School site.