You are here: Home / Featured / Fitch Report showing some results 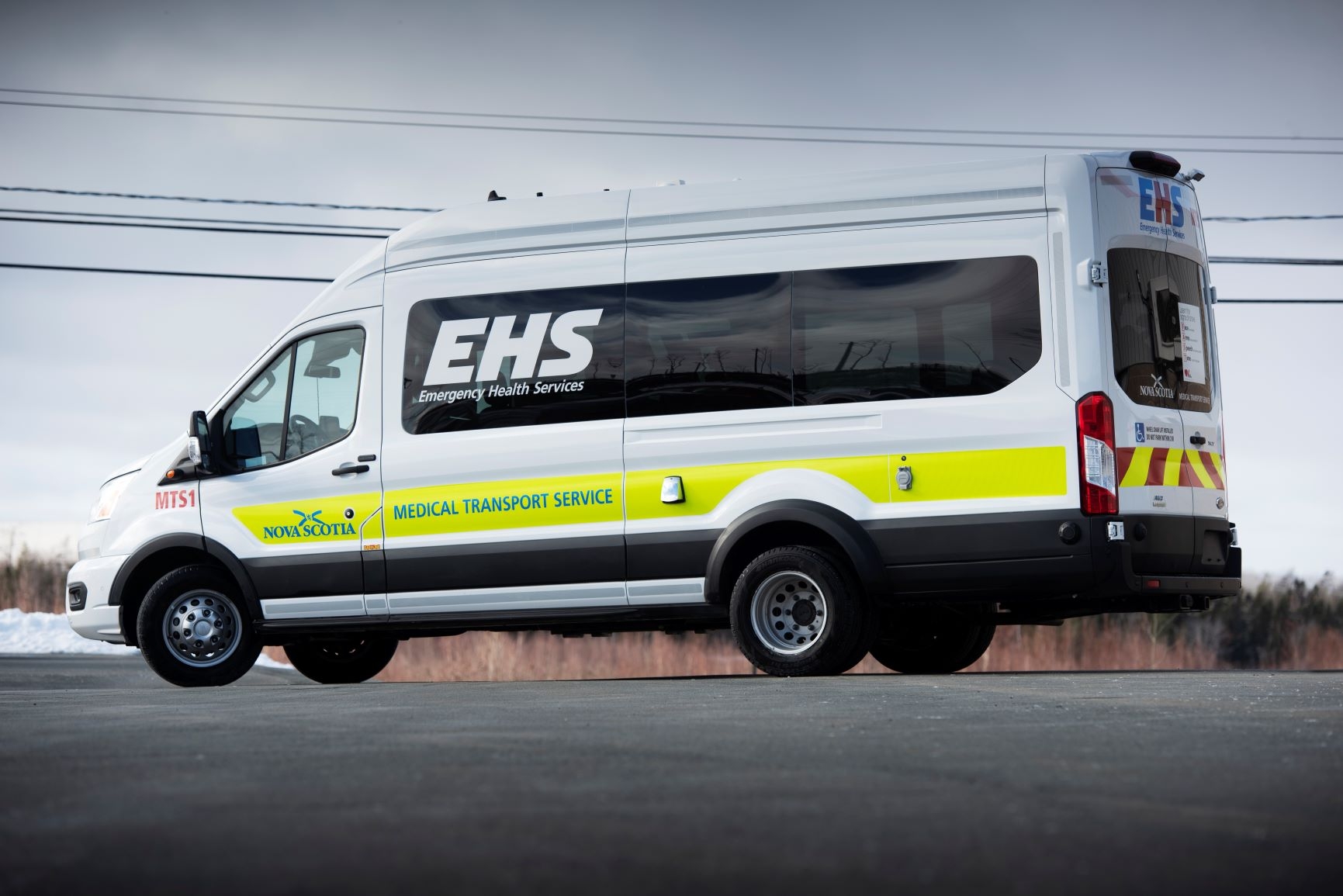 One of the policy changes was to allow paramedics the flexibility to treat patients at home or at the accident scene instead of making a mandatory trip to the hospital. Another change recommended by the Fitch Report, which studied the emergency health system in 2019, was the purchase of a small number of passenger vans capable of transporting non-urgent patients who do not require clinical care or an ambulance ride between hospitals and long-term care facilities.

“The use of ambulances is placing unnecessary stress on the system as in-hospital patients compete for scarce resources in the field,” stated the Fitch Report, which the government kept secret for an entire year. “This creates a paradoxical situation where patient movement is creating potentially negative outcomes on patients experiencing emergencies outside of medical facilities.”

In plain English, ambulances are often tied up waiting to offload patients at hospitals and unavailable to respond when someone such as 49-year-old April George of Bass River experienced a heart attack and waited 80 minutes after calling “911.” George died last February.

The Fitch Report found that transferring patients between institutions accounted for 47% of all ambulance calls and only 2% of those patients required the gear in an ambulance and the skills of a paramedic.

So in March, Emergency Health Services introduced three passenger vans, each capable of moving two patients using wheelchairs and another four patients who must be able to walk. There are no stretchers. The Ford Transit vehicles employ drivers trained in first aid and with advanced defibrillator skills.

The vans operate six days a week, from 6am until 6pm. There is one stationed in the Halifax Regional Municipality, one in the valley (it runs between Windsor and Middleton), and one stationed along the South Shore serving the area between Lunenburg and Liverpool.

According to Greg Wolfe, acting manager for the Central Zone of Emergency Health Services, the vans are used most frequently to move patients between smaller community hospitals and larger regional hospitals, where they have appointments for diagnostic tests and consults with specialists.

To date, more than 300 patient trips have been made. That number would probably have been much higher if COVID restrictions had not limited each van to only one patient per trip for five weeks in April and May.

The pilot project, known as the Medical Transport Service, is being evaluated over a one-year period. And while it may appear like baby steps to address a major issue that has been identified for years, Wolfe says he is “encouraged” to see the uptake among hospitals growing each week.

“In the first few months, we have seen nothing but a positive impact. We have been able to properly and safely reallocate from an ambulance to this new resource that then allows the ambulance to be freed up for more 911 emergency calls or clinically appropriate transports,” he said.

The transport service is also available to nursing homes in the three regions being served. A designated caregiver or staff person from the home is permitted to accompany the resident because once the van gets to the hospital, the driver drops them at the door. Wolfe acknowledges there hasn’t been as much uptake from the long-term care sector in part because the passengers must either be able to use a wheelchair or walk with a minimum of assistance. Many residents in long-term care are simply too frail, and Wolfe said some larger homes have their own vehicles to provide transportation.

Emergency Health Services has also hired more medical staff to handle 911 calls and determine the most appropriate form of response to people who call in with non-urgent conditions. The fact 63,000 Nova Scotians are without a family doctor also contributes to mounting pressure on hospital emergency departments. The province continues to aspire to meet the target of off-loading 90% of patients transported by ambulance to Emergency in 30 minutes.

In 2019, when Fitch looked at what was happening, wait times for ambulances at the Halifax Infirmary were averaging 90 minutes. That has worsened considerably — with wait times up over five hours last March. The South Shore Regional Hospital and Colchester East Hants Health Centre in Truro are also struggling to bring down their wait times. Three months ago, newly-minted Health Minister Zach Churchill issued Nova Scotia Health a directive urging the agency to find ways to move ambulances out more quickly. Churchill ordered monthly reports.

The Examiner asked and received information from Nova Scotia Health that shows wait times are coming down in Truro, Bridgewater, and at Cobequid Community Health, the Dartmouth General, and the Halifax Infirmary. The improvements are significant. But the chart below also shows ambulance waits at hospitals in Metro are still much longer than the target of 30 minutes for 90% of patients. In Truro, the wait in May averaged 1 hour and 46 minutes. At the Cobequid in Sackville, it was 1 hour and 42 minutes, while at the Halifax Infirmary, it was 2 hours and 40 minutes, a major improvement from the 5 hours and 15 minute wait last March. 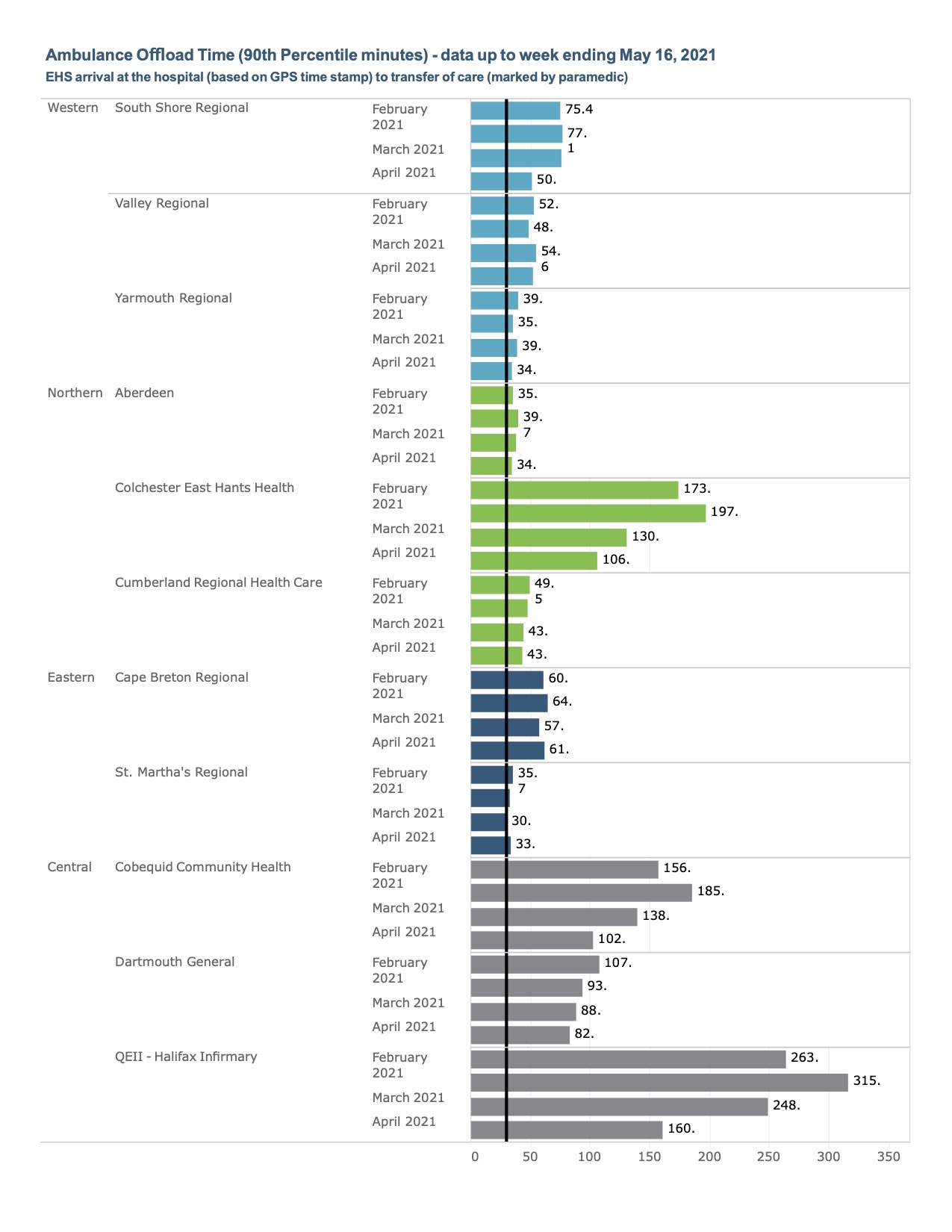 Emergency Health Services is currently making changes aimed at keeping more people out of hospital by treating them at home and introducing passenger vans to see if that might allow more ambulances to stay on the road. NS Health is also working hard to tackle the problem of patient flow. Fingers crossed the progress continues.