You are here: Home / Featured / Fire in the city, gold in the hills

Tim here. I’m back in Nova Scotia (not quite in Halifax yet, but heading that way) after a much-needed vacation. I can’t thank our guest writers enough for filling in — they each did wonderfully, so well that now I’m thinking I need to take more vacations. 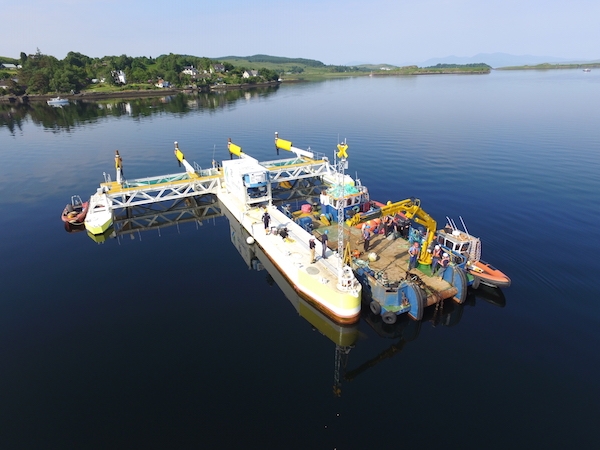 “Tomorrow (Wednesday), an Irish High Court will begin to sort out the ownership of an Irish company whose bankruptcy forced it to abandon its gigantic principal asset — a doughnut-shaped, five-storey high, 1,000-tonne turbine — an ocean away at the bottom of the Bay of Fundy,” reports Jennifer Henderson:

The third version of the company’s device, designed to transform the forceful tides of Fundy into electricity, had only been lowered into a provincially owned demonstration site in late July. After being connected to the Nova Scotia grid for a mere two days, its French parent company pulled the plug on an investment of $400 million, with close to $200 million owing. (Emera Inc. is the other partner which owns 20 per cent of the $33-million turbine known as Cape Sharp Tidal Venture.)

OpenHydro’s financial collapse has spawned shock and confusion. It has also led to speculation about the future plans of three other companies which rent berths at the same demonstration area in the Minas Passage near Parrsboro. Taxpayers have spent at least $40 million so far to establish and operate the tidal test site, which is run by a non-profit agency called FORCE (Fundy Ocean Research Center for Energy).

So far, in nine years, only OpenHydro has deployed a device in the hostile waters of the Minas Passage. Yet when contacted by the Halifax Examiner last week, all three remaining companies (berth-holders) indicate they will continue with their plans to test turbines of different designs by late 2020. But all three — two based in the UK and one in Canada — acknowledged that the collapse of OpenHydro will make it harder to raise the hundreds of millions of dollars required to do it.

Henderson has become the go-to reporter for all issues tidal. Her reporting has been outstanding. 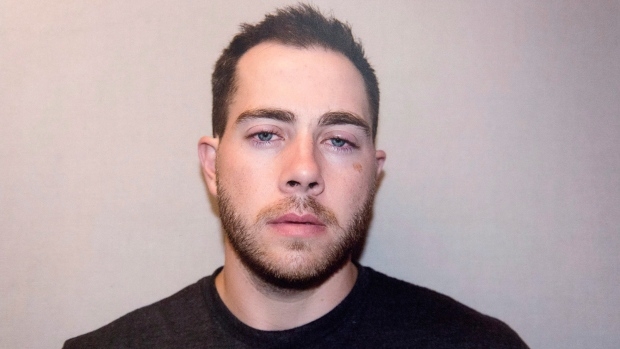 “We may not like Veterans Affairs’ decision to fund Christopher Garnier’s PTSD treatment, but it is the right policy,” writes Stephen Kimber. “And the publicity about Garnier’s case may lead to better outcomes for other veterans’ families.” 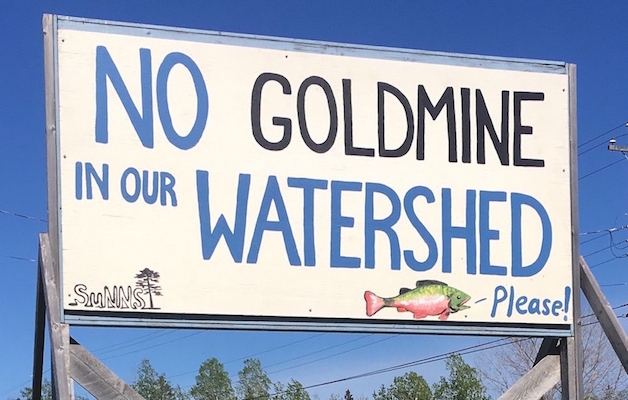 “The Municipality of Colchester has taken a first step to protect the French River watershed from proposed gold exploration,” reports Anjuli Patil for the CBC:

The watershed is the source of drinking water for Tatamagouche, N.S.

Last week, council voted in favour of a motion to start the process of getting the watershed designated as a protected area, which would prohibit mining activity.

North Street fire: at 9:25pm crews were called to the 5700 block of for a working structure fire on the exterior of a three story building. 3 Aerial was first in and the fire was quickly brought under control by first alarm units. 3A, 4E, 3E, 2E, 5Q, Tac12, D2 and PCC responded.

Last night, when I saw news of the North Street fire, the first thing I thought was: “arson.”

And sure enough, Halifax Regional Police issued the following release early this morning:

Police attended a Fire scene in the 5700 block of North  Street at @ 9:25pm. It was determined the fire was deliberately set and as a result of the investigation an adult male was arrested in Dartmouth a short time later. At this time, members of the integrated General Investigative Section are continuing the investigation. Update should be available later this morning.

Why’d I think it was arson? Because it so resembled two other recent fires; the fire department’s Fire Investigations Page lists two south end Halifax fires that were just one block away from each other:

This fire involved a Mixed Use-Residential & Commercial Building. There were no injuries and no fatalities. The ignition source is unknown. Fire investigators have determined the area of origin as the outside of the building. The cause of this fire is classified as UNDETERMINED.

This fire involved a Multi Unit Residential Dwelling. There were no injuries and no fatalities. The ignition source is undetermined. Fire investigators have determined the area of origin as the building exterior. The cause of this fire is classified as INCENDIARY.

The recent south end fires remind me of a series of arson fires that I think were in the 1980s (I don’t have my notes with me; this is from memory) — dozens of fires, some within a few blocks of the recent fires, were started by someone or someones placing debris next to wooden buildings and setting the debris afire.

There was a full-on panic related to the fires, and so much pressure on the police to find the culprit or culprits, and soon enough two people, a man and a woman, were arrested. However, the charges were dropped against the man, and the woman who was arrested was found not guilty at trial.

The court transcripts of both the initial trial and a subsequent wrongful arrest suit are fascinating. I spent an entire day researching those old fires and reading the court transcripts; they raise all sorts of complex issues that require more time and care than I can provide this morning.

But besides those issues, I came away thinking: If the man and woman who were arrested didn’t start the fires, who did?

There has been an alarming number of motorcycle collisions on Nova Scotia roads this summer. Over the holiday weekend there were more. From RCMP releases.

Just after 9 a.m. today, a collision involving four motorcycles occurred on Cornwall Rd. in the community of Union Square, which is approximately 30 km Northwest of Bridgewater.

Preliminary investigation has determined this was a chain-reaction incident where four motorcycles, each with a single male rider, were involved. Three of the men went to hospital via ambulance with moderate injuries, and one man with serious injuries was sent to hospital via LifeFlight.

A few minutes before noon today, a serious collision occurred between a motorcycle rider and an oncoming car. The motorcyclist was with a group of other riders, and as they rounded a curve in the road, a speeding vehicle that was in the oncoming lane struck one of the motorcycles. The female occupant of the motorcycle was thrown from her bike and sustained serious injuries. She was airlifted to hospital via LifeFlight.

The 23-year-old male driver of the car was not injured. Annapolis District RCMP is investigating the collision and have interviewed several witnesses, and criminal charges may be pending. Hwy. 1 in Clementsport was closed for several hours while emergency personnel were on scene, however the highway has since re-opened.

Alex Quon at Global tells us “Everything we know about Nova Scotia’s FOIPOP website — 5 months after it was taken offline.” 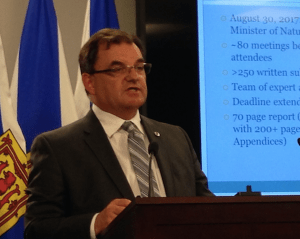 I think the people who have been concerned about the State of Nova Scotia’s forests should be happy, very happy, with the [Bill Lahey’s] Report [the Report from the Independent Review of Forest Practices], and urge MLAs to support the recommendations.

The big questions right now: Will there be a behind-the-scenes effort by Industrial Forestry interests to discredit the Report as there was following the 2010 process? Will the government accept the conclusions and recommendations of the Report overall?

Investment Policy Advisory Committee (Wednesday, 12pm, City Hall) — the term for each of the four appointed citizen members of the committee is over on November 30. Three of the four are technically ineligible to reapply, but that hasn’t stopped them from getting reappointed before. There’s also one councillor on the committee, Russell Walker, and he gets to stick around until the good people of Fairview say otherwise.

No public events today or Wednesday. 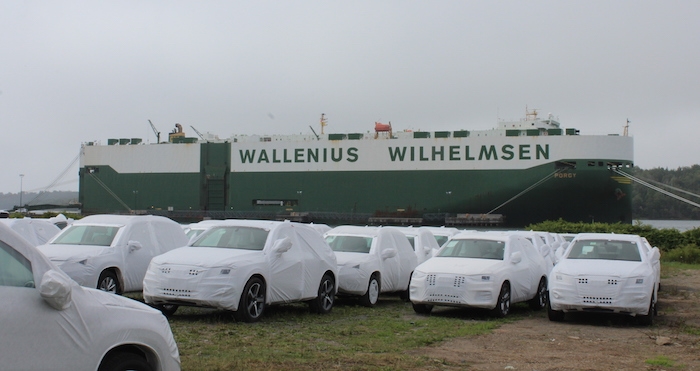 While driving north back to Canada yesterday, I passed a south-moving horde of slow-moving traffic. From Connecticut, through the Massachusetts Turnpike, 495 around Boston, and up I-95 to Portland, there were three lanes of nearly bumper-to-bumper cars, campers, and RVs heading back to points south from their Labor Day holidays.

It was hard to wrap my head around just how many people were on those highways. It must have been hundreds of thousands. I guessed that most of them were coming from campgrounds and hotel rooms in northern Maine or New Brunswick, but surely many were also coming from Nova Scotia.

I took the Yarmouth ferry across the Bay of Fundy, and while waiting to board in the No Man’s Land of the ferry parking lot saw a full boat unload with American tourists heading back home. It was probably the busiest day of the season for Bay Ferries. (On the other hand, the Nova-Scotia-bound boat I was on looked to be at just one-third capacity.)

I’ve tried to be even-handed on the ferry experience, but to be honest, I’m not a ferry fan. The ride was queasily rocky and fog-bound. The food was crap, the beer over-priced. The staff was annoyingly overly pleasant, and the other passengers were either full of boring observations about the weather and roadmaps or obnoxiously uber-American — the middle-aged guy in the SUV in front of me had a Massachusetts vanity plate reading “RAMBO.” Frankly, I’d rather drive around.

On the other hand, I got to stay in the pleasant Cape View Motel in Mavillette last night (I’m typing away in their office while drinking their coffee). There’s allegedly a nice view of some cape or another, but the fog is so thick I can’t see the shoreline, much less the cape beyond. Still, they’re nice folk; I may come back in search of sunnier views.