This issue deserves more attention than I can give it in Morning File. I’ll write a longer piece later today.

Dalhousie’s Budget Advisory Committee is recommending cuts to academic programs and increases in tuition in order to balance its budget. Halifax Examiner education reporter Moira Donovan gives us the particulars, and tells us what it all means.

“The eighth annual St. Patrick’s Day parade in Halifax has been cancelled because organizers say downtown streets remain choked with too much ice and snow,” reports the Canadian Press.

Following up on its interview with Alana York Monday, CBC’s Mainstreet has published a map showing which streets have been “intensively cleared of snow and ice by city crews as of Monday afternoon.” The black lines are the streets that have been cleared: 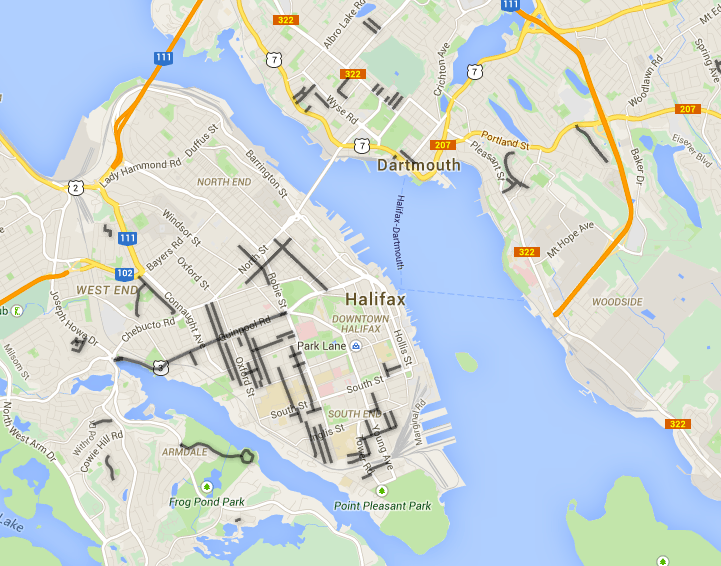 I took this picture on Maynard Street yesterday at 4pm: 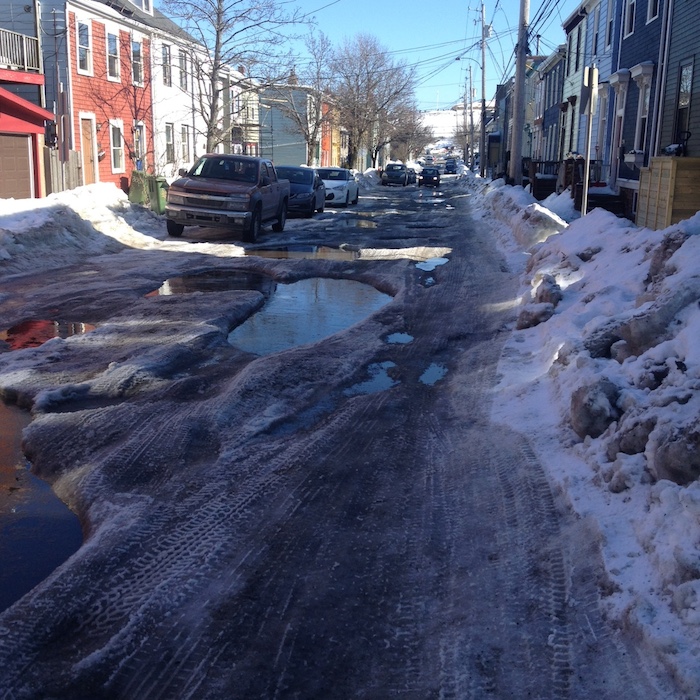 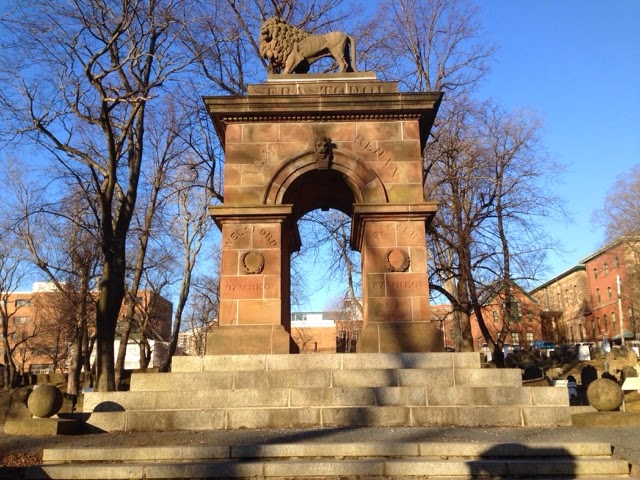 I enjoy Peter Ziobrowski’s BuiltHalifax blog, in which he gives the history of the stuff around us that I normally blithely pass by and hardly ever think, huh, wonder where that came from.

Most recently he discussed the Welsford-Parker Monument in the Old Burial Ground, “the second oldest war monument in Canada and the only monument to the Crimean War in North America.”

The Crimean War. I bet not one in a hundred readers can say exactly what that was about. My own knowledge of the conflict consists entirely of having in university read Cecil Woodham-Smith’s The Reason Why, a groundbreaking historical work published in 1953 that explored the ill-fated Charge of the Light Brigade. But while I vaguely recall, well, the reason why the British Army was so ill-prepared for the conflict, I have no idea why British society and its government decided to embark on the adventure in the first place. I’m guessing it had something to do with queen and country, and honour.

In every age, there are the “serious people” who are deemed serious because they see value in human carnage, and then there are those who are ridiculed as effeminate appeasers to evil, condemned for their lack of patriotism, and sometimes thrown in jail as traitors because they dare question the value of organized mass murder. But in retrospect, given time, nearly all wars turn out looking stupid. That was about what?

Over in the Public Gardens there is a ridiculously ornate memorial to Canadians who fought in the Boer War. I’m sure at the time there were serious people making the excellent case for war, and no doubt there were geopolitical goals and economic concerns and business aims and the conversion of heathens to the faith, but from this vantage point a century and so out, all that matters is that the war led to the establishment of the Apartheid state and all the horrors and injustices that that entailed. Sometimes I eat lunch next to the memorial and think about the proud fathers and mothers, the sweethearts left behind, and the brass bands celebrating the courage of kids being sent to the killing fields, too ignorant of the world and their own humanity to understand anything at all. It could be the Crimean War, the Boer War, the present adventure in Iraq—it’s the same story, over and over and over again.

Reading Bob Bancroft and Ralph Surette’s powerful March 9 articles (“Challenge of the mainland moose as numbers fall, habitat shrinks,” and “Split DNR, put its agenda through the wood chipper”), as well as Eleanor Trombley’s letter in the same edition, an observation came to mind that Winston Churchill made during a visit to Canada in 1929 on the harvesting of quality trees, of which few remain, as is sadly evident in our own province: “Fancy cutting down those beautiful trees we saw this afternoon to make pulp for those bloody newspapers, and calling it civilization.”

City council (10am, City Hall)—council will look at the capital budget, and the proposed list of large capital projects. 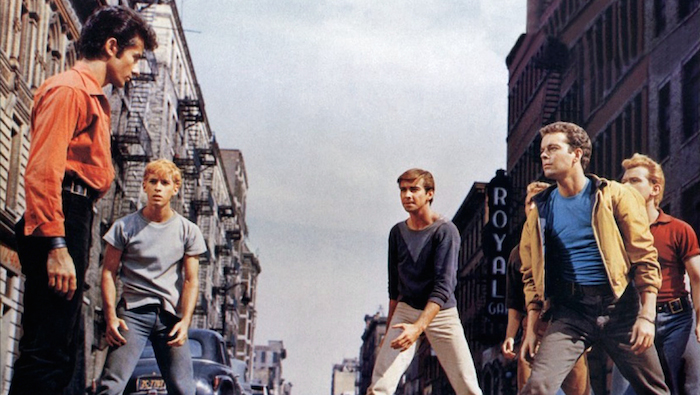 Bicyclists and orchestra members will have a tightly orchestrated gang fight on University Avenue today.

University Avenue Bike Lane (4pm, or maybe 7pm, LeMarchant Place, Dalhousie University, 1246 Lemarchant Street)—confusingly, the city’s municipal calendar says this open house to get public opinion about the proposed bike lane starts at 4pm and runs to 8pm, but the link to the actual event page says it starts at 7pm and runs to 11pm. The Halifax Cycle Chat people say it’s 4-8pm, so I guess they know what they’re talking about.

Either way, orchestra members and bicyclists will have a rumble out in the street, tire pumps and violas flying this way and that, and the Dawgfather will sell snacks along the adjoining sidewalk. It will be a big time.

Regional Watersheds Advisory Board (5pm, Helen Creighton Room, Alderney Public Library)—board members seem miffed they weren’t consulted about the proposed daylighting of Sawmill River, so councillor Jennifer Watts, who chairs the Environment and Sustainability Committee, wrote them a letter explaining why they weren’t consulted, and saying she’ll show up at tonight’s meeting to answer questions. The daylighting issue, meanwhile, has been kicked up to the Harbour East Community Council, which I think is actually now called the Harbour East–Marine Drive Community Council, where it will begin its march to a slow death, I’m guessing.

Standing Committee on Human Resources (11am, Room 233A, Johnston Building)—the committee will look at proposed appointments to agencies, boards and commissions.

On this date in 1832, Province House caught on fire, as soot falling down the chimney started a fire in the library. Damage was reported at between £30 and £40.

Modelling with Pyomo and Gurobi Cloud (Wednesday, noon, Morroy Building – MA021)—”Several modelling languages exist, but their main drawback is their sensitivity to syntax (Gusek…) and difficulty to read the model once written. Modelling in python reduces the modeler’s time required given its intuitive nature as well as provides flexibility unavailable in other modeling languages. Also automation of the solving can be easily done, all the way from data extraction to data output. Pyomo supports several solvers (CoinOR, Gurobi, GLPK, etc.) and can quickly switch between them. Gurobi Cloud provides a low-cost option to solving large problems that are typically unsolvable using free solvers. A brief demonstration of the Gurobi Cloud using Amazon Web Services and the automation that can be done in conjunction with Pyomo will be shown.”

Sub-seafloor geologic sequestration of CO2 is becoming more prevalent because of its potential to mitigate the effects of anthropogenic CO2 on climate. Leakage can occur within a five kilometer radius of the initial injection site, and can be harmful to the surrounding environment.

Greece (Wednesday, 12:30pm, Lord Dalhousie Room, Henry Hicks Building)—Emmanuel Sigalas, a Visiting Professor at Carleton University, will speak on “Parliamentarism in Crisis: The impact of the Eurozone crisis on the legitimacy and autonomy of the Greek Parliament.”

It’s been 10 years since the semantic web has been proposed and foundational standards published. The promise of common data formats, the sharing of data application, enterprise, and community boundaries has not quite been realized since then. In this talk I will review the state of the art in the semantic web and highlight how it can be applied to the technical and administrative challenges that the management of maritime and ocean research data poses. 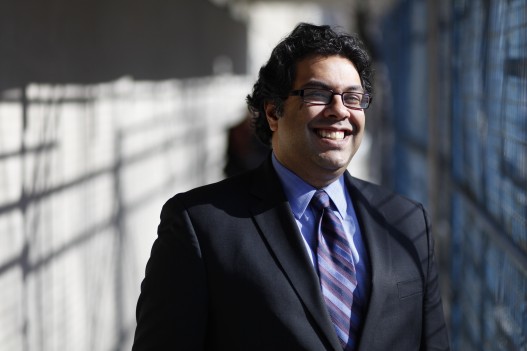 Living Connections: From Ecology to Economy (Thursday, 3p, Library 135)—Tony Charles will speak on “Fish and Fishing Forever”; Jeremy Lundholm will speak on “An Ecological Approach to Green Infrastructure”; and Linda Campbell will speak on “Mercury Rising: What is Happening in Nova Scotia Lakes?”

Judging by this mailer sent to constituents of Winnipeg-area MP Lawrence Toet, the Conservatives are aiming for the “stupid” demographic. 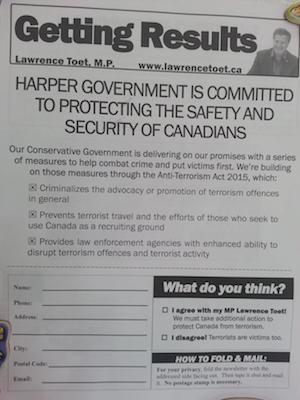 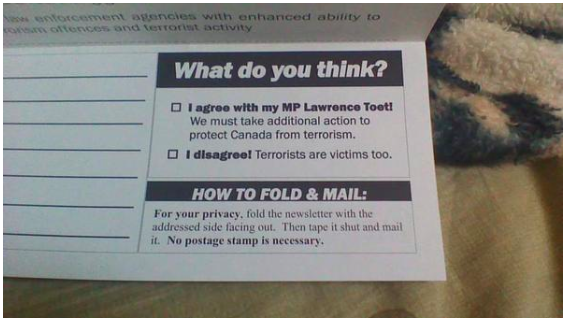 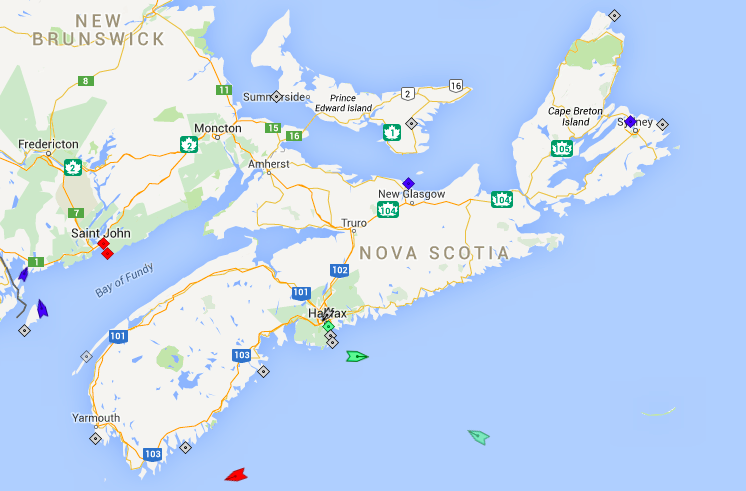