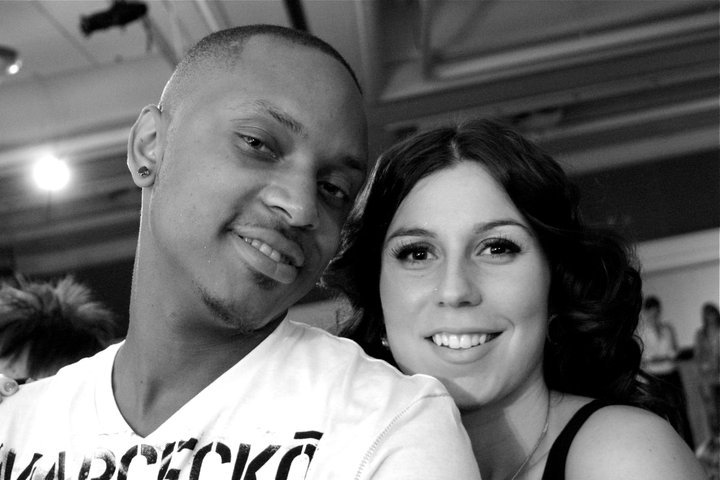 Kaylin Diggs with his fiancee, just before he was killed. Photo: Facebook

Devon Downey, 23, was charged yesterday with manslaughter for the 2012 death of 26-year-old Kaylin Diggs. Diggs was killed in a post-bar fight just before 4am on August. 11, 2012, on the corner outside Durty Nelly’s. Downey turned himself, and was then released on bail pending trial.

The Chronicle Herald today has a poignant interview related to the incident:

The next month [after Diggs’ death], about 200 of the victim’s friends, family members and supporters marched from Sullivans Pond in Dartmouth to the Halifax Commons in the first of several Stop the Violence events held in Diggs’s honour.

Quentrel Provo organized that event. Diggs was his cousin and his lifelong friend.

“I played basketball with him, and I’m related to him on my father’s side, and let me tell you, I feel for both families.

“Always thought he was a funny guy, a cool guy who never bothered anybody.

“It’s sad, really, because he made a mistake that night.”

Despite the loss of his best friend, Provo said he has no hate in his heart for the accused.

“No hatred toward him — just his (alleged) actions.”

To no one’s surprise, the province’s snow-clearing budget is now about $9 million over budget. It’s impossible to predict the next year’s weather events, and so governments tend to low-ball their guesses for the cost of snow clearing in order to get a budget that looks like it’s balanced, and then in high-snow years they make up the difference with contingency funds and by shifting other budgets around. I don’t know that there’s anything wrong with this, actually. Just, we shouldn’t get upset when the snow clearing budgets fall short. 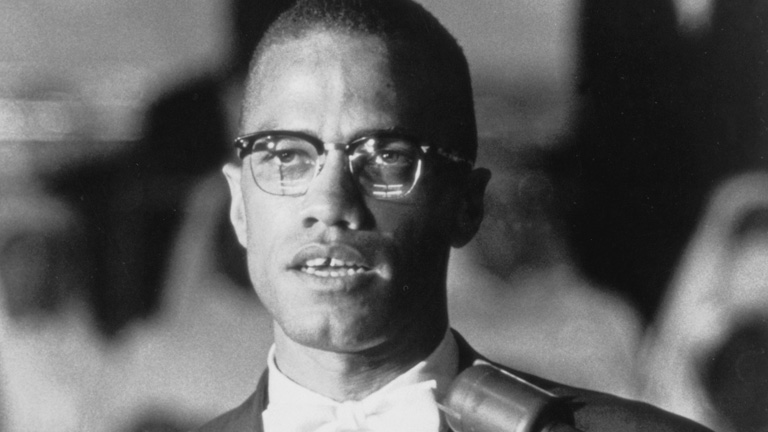 Malcolm X continues to inspire people in Halifax’s Black community, reports Chris Benjamin. This article is behind the Examiner’s pay wall and so available only to paid subscribers. To purchase a subscription, click here. 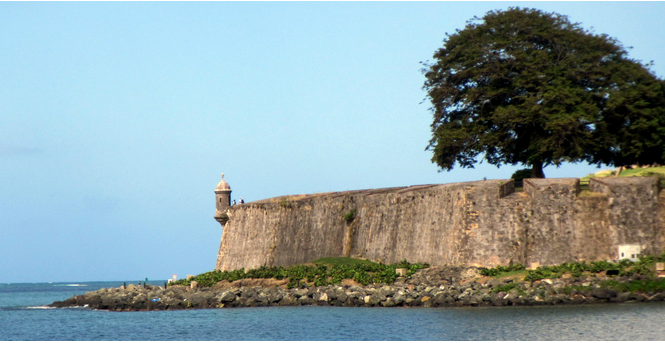 Stephen Archibald shows off his photos of Old San Juan, Puerto Rico. Along the way he makes a tangential observation:

Made me remember that I never heard what happened to the paint that Quinpool Road won from Benjamin Moore a couple of years ago. Couldn’t find any celebration of the results online.

Ah, good times. Recall that in 2013 the paint store chain Benjamin Moore ran “Main Street Matters” contests in which business districts in cities around the country would compete with each other for “makeovers.” The winning business district in each city would then get free paint from Benjamin Moore, with which to “spruce up” their streets. In HRM, the dozen business streets chosen for the contest were Agricola, Argyle, Barrington, Birmingham, Blowers, Queen, Quinpool, and Spring Garden Road on the peninsula; Herring Cove Road in Spryfield, Sackville Drive in Sackville; and Main Street and Portland Street in Dartmouth.

From a business district perspective, this was a horrible idea. Think about it. Each business district was announcing to the world that its storefronts were badly in need of repair and repainting, and that the landlords and businesses on the street were too impoverished to take proper care of their own buildings, and so needed a handout from denizens on social media and a big corporation to make it happen. And then 11 of the business districts would find that some other street won the contest, leaving their own streets not only in sad states of disrepair, but now famously in sad states of disrepair, as they had just spent a month on a social media campaign telling the entire world how badly they needed a makeover. But the people who run the business districts seem not to have thought about that inevitable result, and jumped into the contest.

Whatever. It’s a free country, and people who run business districts are free to boneheadedly join misguided competitions. But this thing really went off the rails when the city government, apparently in violation of its own policies (the bureaucracy completely sidestepped the tendering process), wholeheartedly jumped on board the contest. Mayor Mike Savage was filmed in a free promotion video for Benjamin Moore, in which he compared himself to the corporation’s spokesperson, Brad Pitt.

Continuing the free advertising given to a corporation that made $1.5 billion in profits over the last decade, the city set up a page on its website, where people could go and vote for their favourite crappy street in need of a makeover.

Then hilarity set it. The poll was so badly managed that people were able to violate the contest rules and game it. Explained a city press release from July 25, 2013:

The online poll, which ran from July 8-19, was hosted by HRM on its website to help identify the ‘people’s choice’ to receive a three-block paint makeover, courtesy of Benjamin Moore as part of its Main Street Makeover project.

Respondents were asked to vote once every 24 hours for their favourite street. But after the online poll closed, a close analysis of data by HRM staff revealed the potential for a significant number of unacceptable responses. Of the more than 40,000 responses to the poll it is estimated as many as 9,600 were improperly generated. There is no way to determine how these invalid responses were distributed amongst the 12 candidate streets so it is impossible to declare a winner of the poll.

Oh, the suspense was killing us: which business street would the corporation decide was the crappiest in Halifax? No, not really; it was a foregone conclusion. Benjamin Moore chose Quinpool Road as the contest winner. And what’s on Quinpool Road? You guessed it: 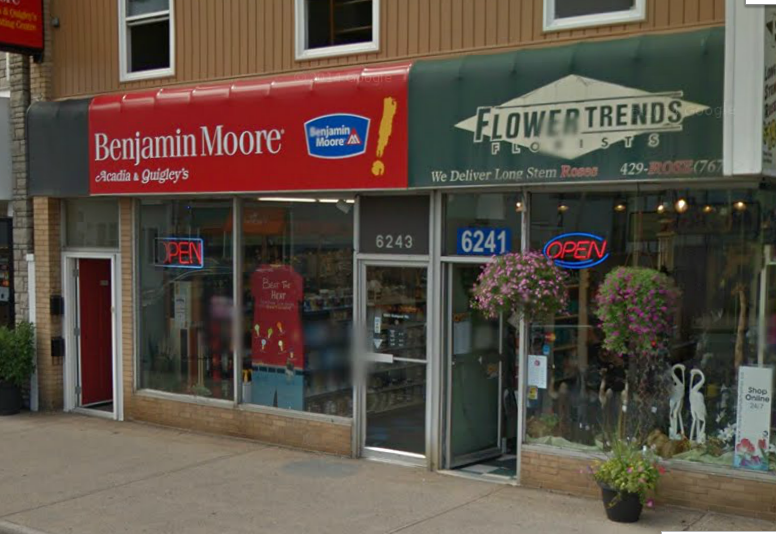 But while Archibald missed it, there was a low-key celebratory “makeover” of Quinpool in June of last year. Councillor Linda Mosher, who represents the street, wrote about it in her monthly newsletter: 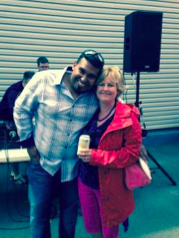 On Saturday, the Mayor and I joined Karla Nicholson of the Quinpool Road Business Association and Eric Guerra of Benjamin Moore (below) to celebrate the completion of the Quinpoool Rd makeover! The facades of 21 businesses between Harvard St and Monastery Ln have been painted and repaired. Many Quinpool businesses outside this stretch have also been touched up, thanks to generous discounts from Benjamin Moore and with funding from the Quinpool Rd Business Association’s façade improvement program. Take a look!

Note that while the contest was to result in a “three-block paint makeover,” the corporation paid for the repainting of just one block of Quinpool — the block that contains the Benjamin Moore store — and businesses not on that block had to buy their own paint from the store.

The other 11 business districts in Halifax? Still full of crappy facades in sad states of disrepair, the businesses and landlords too impoverished to remedy the situation themselves.

Turns out, self-interested advertising campaigns for corporations that pose as “fun contests” or “corporate charity” are, in fact, self-interested. This is always the case. Whether it’s insurance companies doling out the thinnest slice of their corporate profits for cooperative grocery stores or soup kitchen kitchens, or telephone companies getting people to tweet about mental illness, or banks buying naming rights to public facilities, the point is to save pennies on the dollar on advertising by getting citizens to run the ad campaign for free. The corporations see the people taking part in these campaigns as suckers, and they’re right.

But when designers and users aren’t the same people, the obvious gets ignored and the system falters. It’s how we end up with accessible bathroom hooks too high for wheelchair users to reach, walking paths that don’t follow the real routes people take and cyclists using a Swirling Tunnel of Doom to access the Macdonald bridge.

Users lend practicality. Also empathy. They know that sinking, helpless feeling when the bus doesn’t arrive, the numbness of taking an hour to get from the Hydrostone to Bayers Lake for a movie.

I am very disappointed that I am not able to join a bus trip to Charlottetown on March 13 and 14 to support and cheer on my Cape Breton Screaming Eagles hockey team.

When we heard about the bus trip on one of the Screaming Eagles broadcasts, my mom contacted those organizing the trip. After a couple of phone calls back and forth, my mom was told that I was unable to go on the trip because there would be adults with liquor on the bus. They will only allow those who are 19 years of age and older to go on the bus trip.

I am a 17-year-old loyal and dedicated Screaming Eagles fan, and I have been a season-ticket holder for the past eight years. I thought it would be nice for my mom and I to go on the trip over the March break.

It is unfortunate that younger fans in my age category are restricted from going on this bus trip. Too bad some of the other fans couldn’t hold off until they got off the bus in Charlottetown to socialize with their refreshments.

I guess I will have to settle for listening to the games on the radio. Go, Eagles, go!

Audit and Finance Committee (10am, City Hall)—the Auditor General will speak more about the Washmill underpass fiasco, so I’ll be there, assuming the meeting isn’t cancelled because of the snow.

I’ve made great progress on my Washmill investigation, but publication has to wait until I receive a few more documents. It’s coming. 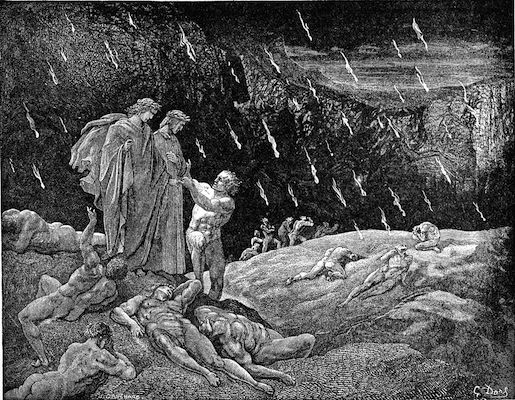 I can’t remember my university art history lessons and don’t speak Italian, so I can’t read all the Italian wikipedia pages devoted to this painting. But I think it was created by 19th century French painter Gustave Doré, showing Brunetto Latini, an instructor and associate of Dante, being escorted through hell, as imagined by Dante.

All well and good. But look how warm it is. 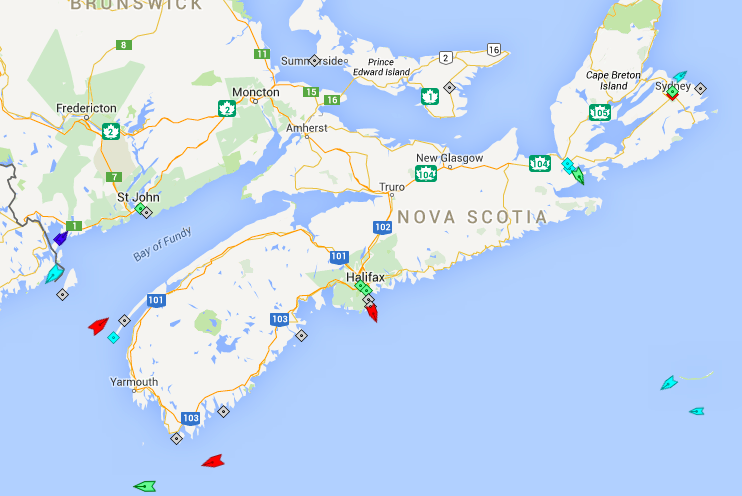 Just one month and one day until spring.