You are here: Home / Featured / Feeling the sting of first-past-the-post 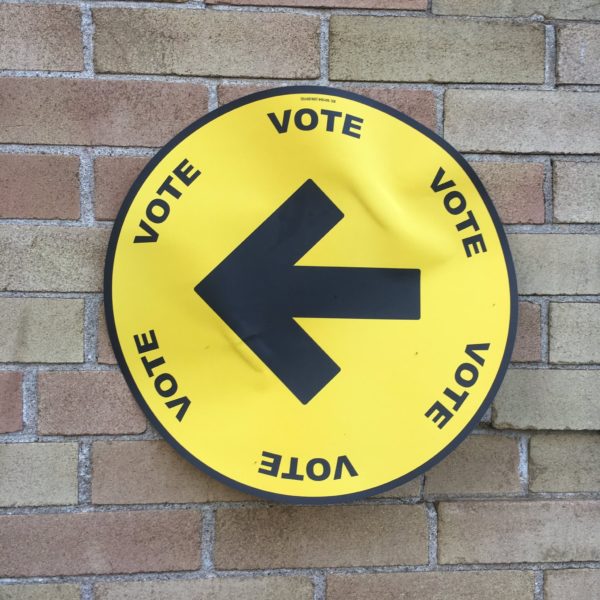 With national voter turnout clocking in around 65.8% (it will adjust as those who registered on election day are counted) and Nova Scotia’s turnout slightly higher at 68.8%, Canadians re-elected 157 Liberal MPs, enough to form a minority government.

In Nova Scotia, Liberals held on to 10 of 11 seats, with former Progressive Conservative MLA Chris D’Entremont winning in West Nova (from Berwick to Yarmouth) for the Conservatives. Country music stardom was not enough to take the day for newly-minted Conservative candidate George Canyon, who lost to Liberal incumbent Sean Fraser.

Our next door neighbours were feeling a distinctly different vibe yesterday. New Brunswickers elected the country’s third Green MP, along with three Conservative MPs, all seats that had been Liberal in 2015.

Other notables: Former Liberal cabinet minister Jodi Wilson Raybould won the country’s only independent seat in the BC riding of Vancouver-Granville. People’s Party leader Maxime Bernier did not win a seat, nor did any PPC candidate. They did, however, get 292,703 votes (1.6%), significantly more than any other marginal party. (The next highest was Christian Heritage with 18,816 votes, or 0.1%.)

Electoral reform didn’t feature as prominently in this election as it did in the last, but it’s still worth noting the inherent issues with Canada’s strictly first-past-the-post system. I’m sure the analysis will pour in over the coming week, but in the meantime, have a look at the percentage of popular votes for each party, compared to the percentage of seats they each won. It’s worth noting that the Liberals, Conservatives, and Bloc all benefitted from the current system nationally, though the Liberals by more. Meanwhile, voters for Greens and New Democrats are definitely feeling the sting of not necessarily having their vote “count”. In an increasingly multi-party system, first-past-the-post is looking more and more inadequate all the time. 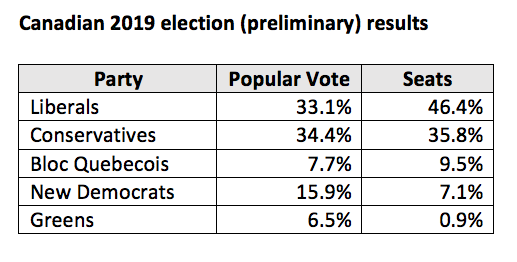 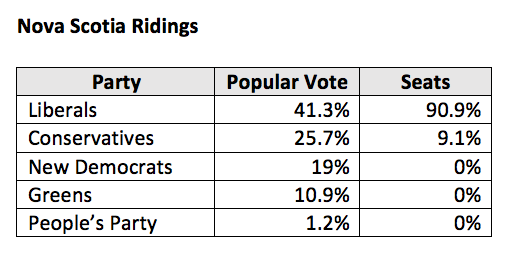 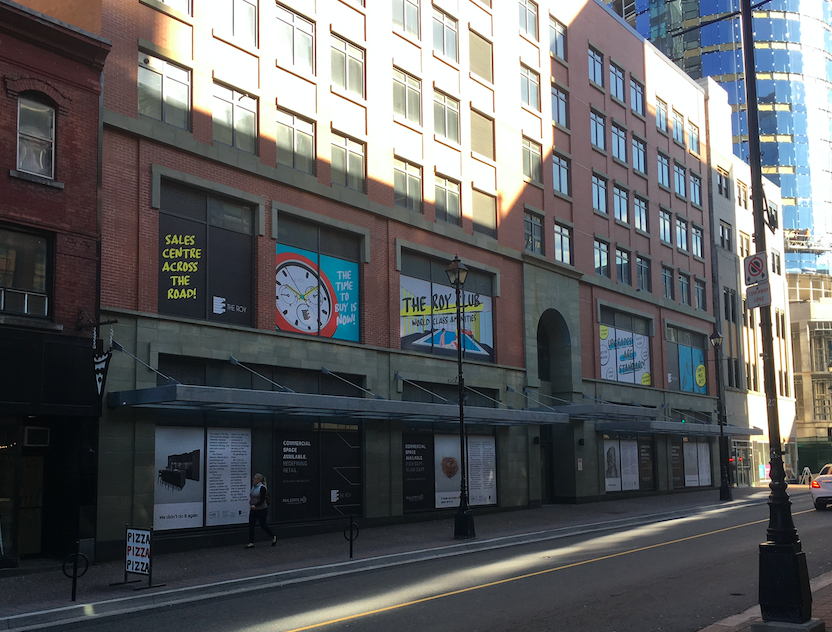 A pair of duelling lawsuits have been filed related to a much-delayed Barrington Street development.

On one side of the legal battle is The Roy Building Limited, the company formed by Toronto bazillionaire Louis Reznick to building the fancifully named 16-storey Roy Building, which replicates the facade of the 1940s-era building of the same name, which was torn down for the new building.

On the other side is Ruth Armelin, who describes herself as a retired person living in Albufeira, Portugal, who is “a visitor to Halifax, Nova Scotia from time-to-time.”

At dispute are four condo units in the Roy Building comprising a specially built super–luxury suite for Armelin. Price tag: $2,089,050.

Tim Bousquet has the rest of the details behind the lawsuits here. The story is behind the Examiner’s paywall. Please subscribe!

According to a police release from Monday:

Halifax Regional Police was responding to a dangerous driving incident today in Halifax, which resulted in the death of a 29-year-old man.

At approximately 0230 hours, officers were involved in a slow speed pursuit of an individual dangerously driving a vehicle around Macdonald and MacKay bridges, which resulted in the man fleeing his vehicle on foot, and shortly thereafter falling off the Macdonald bridge resulting in his death.

Our thoughts are with the family of the deceased at this difficult time.

The investigation is ongoing. HRP has referred the matter to Nova Scotia Serious Incident Response Team (SiRT). Given the matter is now being investigated by SiRT, HRP is unable to discuss further details about the incident.

The “slow speed pursuit” might not be as slow as one might think. CBC News spoke to a man walking across the McDonald bridge early Monday morning who says he saw a group of police cars surrounding an unmarked car travelling at about 70km/hr.  CBC News reports:

At a news conference Monday, police say that the original dangerous driving call was in Highfield Park and that police chased the driver across the Macdonald, then the MacKay and then the Macdonald again.

After the chase, police say the man got out of his vehicle and fled. Police chased after him and the man then fell off the Macdonald Bridge and died, police say.

Inverness County is conducting a survey to take measure of the Cape Breton district’s housing needs, reports Brent Kelloway for CBC News. A local councillor is concerned that a lack of housing options is preventing professionals from settling in the area.

Alfred Aucoin, president of the Association Développement Lemoine, said the housing issue is not only stopping prospective residents from moving in but it is also causing some residents to move out.

“Some people would come home, but one of the factors that deters them is that there is no place to stay,” said Aucoin.

Aucoin said one of the issues Chéticamp is facing is limited resources for housing. He said those resources are focused in the wrong place.

“Everything seems to be geared toward bed and breakfasts right now,” said Aucoin.

Conventional bus ridership and revenue are both up compared to the same period last year and as far back at 2015. (Since transit service conditions and ridership varies seasonally, it makes sense to analyze it by comparing like time periods.)

Ferry ridership has dropped slightly again, though it remains higher than its pre-Big Lift numbers. 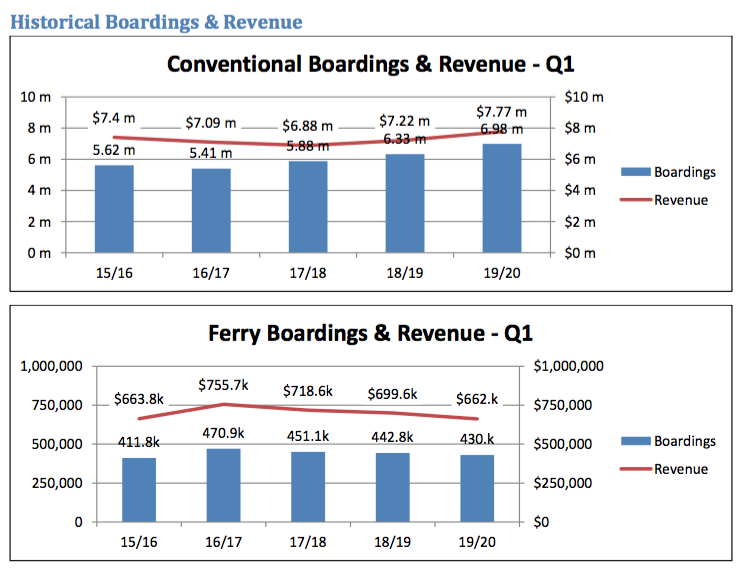 On-time performance took a slight hit, going from 80% last year to 77% this year. The Halifax Transit report points to new bus routes on new streets implemented in August 2018 as a possible cause for the fall in on-time performance. Schedule adjustments in November could improve the situation, says that report.

Wendy Martin of the CBC did a Q&A with Nova Scotia chief medical officer Robert Strang about flu shots, and why you should probably be getting one soon, or at least before flu season is upon us in December.

Martin asked Strang how many Nova Scotians typically get immunized for influenza:

Not as many as I would hope for. Overall, 36 per cent of Nova Scotians got their flu shot last year and it was roughly the same two years ago. So we have a lot of room for improvement and we’ve made big strides in terms of increasing access to the flu vaccine by making it available for the last five, six years now in pharmacies. Access is not a reason for not getting vaccinated. I think a lot of people just don’t really believe that it’s that important to get immunized or have unfounded concerns about the vaccine, that it doesn’t work or it’s not safe. It is a safe vaccine. It’s not perfect in terms of its effectiveness, but we do know that even some years when there’s not a great match and the effectiveness isn’t as good as we’d like, getting a flu shot is still helpful and it’s better than not getting a flu shot because even when the vaccine is only maybe 40, 50 per cent effective, it’s much more effective than that in preventing severe influenza and having you perhaps end up in the hospital.

Screenshot from this video right here, produced by CBC Mainstreet.

No, that’s not banjo player and songwriter extraordinaire Old Man Luedecke showing off his climate science chops. But yes, it is Old Man Luedecke reading from the recent IPCC report on oceans and the cryosphere, as produced by CBC Radio Mainstreet. Mainstreet got a long list of well known Nova Scotians to read selections from the report, and then asked Dalhousie marine biologist Boris Worm to comment on and explain the findings. You can tune in to the hour-long audio segment here, or check out the highly abridged video version here.

Halifax Regional Council (Tuesday, 1pm, City Hall) — The agenda includes a motion to kill further study of the stadium proposal, a motion “restricting all Animal Acts for Entertainment, including Bull Riding,” in Halifax, and first reading of a slew of changes to parking bylaws, including increasing rates for permits and on street parking.

Audit and Finance Standing Committee (Wednesday, 10am, City Hall) — nothing terribly interesting on the agenda.

Community Design Advisory Committee (Wednesday, 11:30am, City Hall) — the committee is going to babble on about the pointless Centre Plan.

Heritage Advisory Committee (Wednesday, 3pm, City Hall) — there’s been talk of creating an Old South Suburb Heritage Conservation District since 2003. We’re still talking about it. In fact, the proposal for the district (as opposed to the actual creation of it) is so old it should get its own historic designation.

The purpose of this panel discussion is to situate the housing issues facing older LGBTQ2S+ populations in the national policy debate currently underway in light of the recently released Canadian Mortgage and Housing Corporation National Housing Strategy.

Given the dearth of data on the needs of older LGBTQ2S+ Canadians, our team is conducting a 1-year Social Sciences and Humanities Research Council (SSHRC) grant to uncover the specific policy and programming gaps and needs of older LGBTQ2S+ Canadians using a 3-phase process: 1. A scoping review of existing housing policies, 2. An online survey of key policy considerations, and 3. In-person consultations in 5 Canadian cities. The key analytic frameworks utilized in this housing study included: 1. Sex and gender-based analysis, 2. PESTEL analysis, and 3. Thematic analysis.

Still wishin’ for a coalishin’.