You are here: Home / Featured / Examineradio, episode #142: The Auditor General 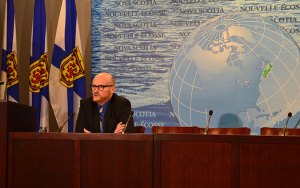 In November, Auditor General Michael Pickup was accused of overstepping his authority.  His report chastised the province for doing a “poor” job of communicating its strategies on doctor recruitment and primary health care. In turn, the premier chastised  the auditor general, saying Pickup should run for elected office if he wanted to criticize policy matters.

It did raise questions about the role of the auditor general. Did the premier have a point?

This week, Tim sat down with Pickup to talk about it.

Nowhere will you find when I write these reports to the legislature do I say ‘debt bad, debt good’ … That is for others to judge.

Plus, we talk about the case of Abdoul Abdi, the 23-year-old man who spent most of his childhood as a ward of the province and now faces deportation to Somalia, a country he fled when he was only six years old. Abdi was convicted of a violent crime in Canada and served his time. He doesn’t have Canadian citizenship because the people who were responsible for him — the province — never filed for it. He’s currently in an immigration detention centre in Toronto.

Check out this piece by El Jones to learn about others facing this very same situation.

Also, Tim and I talk about what he found when he searched for Nova Scotia connections in the Paradise Papers.