You are here: Home / Commentary / Evidently, it’s elementary, they want us all gone eventually

It wasn’t supposed to be like this. People keep telling me I look exhausted, and I thought, after the trial, I’ll take some time off. Nas’ song “If I Ruled the World” was repeating in my head. “We’ll walk right up to the sun, hand in hand.” Things seemed to be going well, for once.

But, of course, I wouldn’t be exhausted in the first place if there were ever justice for Black people. What “self care” can we ever have when the white system never stops?

Randy wants me to write about his case. He wants people to know what happened. He trusts me to do it. I don’t know how, it all feels too close and raw and personal. It’s on my shoulders to do justice now, and I know how the white gaze works. I know without transcripts, and legal opinions and white people validating what we say that our experiences never matter. 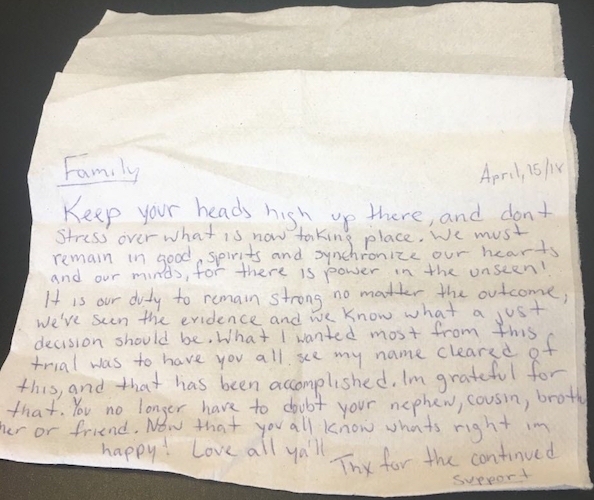 Keep your heads high up there, and don’t stress over what is now taking place. We must remain in good spirits and synchronize our hearts and our minds, for there is power in the unseen! It is our duty to remain strong, no matter the outcome. We’ve seen the evidence and we know what a just decision should be. What I wanted most from this trial was to have you all see my name cleared of this, and that has been accomplished. I’m grateful for that. You no longer have to doubt your nephew, cousin, brother, or friend. Now that you all know what’s right, I’m happy!

Thx for the continued support.

After the verdict, I call Sean MacDonald. Halfway through the call I start sobbing uncontrollably. I hate it here, I tell him. I hate going through this over and over again and it never stops. Sean tells me two things. He says, we have to have a heart for this work, and that heart is what is causing you this pain right now. He tells me, once that steel lock closes it takes years to break it down.  But in the meantime, you have a voice and what you can do now is use it.

But I’m tired of using it. When the verdict came in, we stood in the lobby and we were all crying and a white person asked me, “how are you doing?” And like my grandmothers and great grandmothers before me, I held my empty hands up helplessly and cried out, “how am I doing? How are Black people supposed to be doing in this world when you do this to us day after day.” Then I broke down sobbing and Randy’s aunts came and stood around me, and shielded me, hid me. Give us some dignity, they rebuke the white people watching. Give us at least that. Can’t Black people even have some humanity?

The irony is, I’m writing this in a Starbucks and I just started crying again writing about this. Ironic, because while we were waiting for the verdict, two Black men were racially profiled and arrested at a Starbucks in Philadelphia. People want to talk to me about that, but this thing that happened under everyone’s noses is met with silence.

It’s the silence that gets me. I wonder how the same people who can write about all-white juries acquitting Gerald Stanley or Robert Cormier never write about what happens when those all-white juries have Black men in front of them. Why do our convictions not matter? But they don’t matter because when you have Black skin it means you did it, automatically. He wouldn’t be here if he didn’t do something, right? Black skin is the only evidence they ever need.

The waiting area is freezing cold, and the chairs and benches are hard. About the third day of deliberations, my time at King’s College teaching Dante comes back to me, and I understand limbo in a new way. Then I think about the limbo dance, how it comes from the holds of the slave ships, the black bodies contorted. The stick represents slavery — the Black body goes down under the stick into hell, and jumps up, liberated. And tourists on cruise ships watch it these days, and it’s entertainment. Just like court where the spectacle of Black suffering takes place.

The good thing about the weekend is the sheriffs leave us alone and after a couple of days we start lying on the floor. On the second day, when we’re already ragged with the anxiety of waiting, the crown comes out, stands in front of the media, and where the family can hear her says that the “other side” (meaning us) has been smirking and rolling their eyes and intimidating the other family. She claims we are too threatening for them to be here.

The family erupts. We have respect, they say. We feel for them. We would never do that. And they weren’t doing that. But having Black bodies is a crime so we can’t even be left alone even now. She has to degrade us. And these are the people who conduct the prosecutions of Black men. What cruelty, to try to upset Black people to try to prove in front of white people that we are undisciplined or rowdy or good for nothing. And this is the court system we are told is objective, and fair, and brings us justice.

The fourth day, Randy sends us his note. We all break down together, knowing he is down there, waiting alone, thinking of us, trying to lift us up. Trevor McGuigan is crying too, he’s done everything he can, been everything, and it won’t be enough to shift the system one bit.

No matter what Sean says, I can’t bring myself to write. I’m supposed to write this column, but I can’t even write about this case without crying all over again, and nothing else is worth writing about.

And what’s the point. Week after week I write the things that make people hate me and want to attack me and I tell myself that it’s worth if it some people will listen. But people will never listen. There is an endless pool of white people to make up the juries and there is nothing I can ever say or do that will change them. So why not sleep instead. Why not save my energy for the people who need me now, for buying the clothes for the pen box, for keeping spirits up, for the advocating that we need to do, for the years and years ahead of us to try to undo what white people do.

What’s the point when no matter how hard we push, no matter if we work all day and night, no matter if we speak and shout and rally until our throats are raw, at best the reward is learning about more injustice and having to fight to fix that.

Desmond says to me, if you think about it, being a judge is the perfect job for white supremacy to create. You sit there, and you witness injustice, and you’re actually obligated to say and do nothing. The remedy is we suffer for years. The remedy is we struggle and fight and cry for more white people to maybe decide to give us another shot at going through the same system with more white juries. The remedy is even if we fix it this once, there’s dozens, hundreds, thousands of other injustices that we will also have to fix, because the white system keeps rolling on.

I am only writing this now because I feel guilty. Because I feel guilty every time I rest, every time I feel that I can’t keep going. My silence guilts me, but I don’t have the words yet. I don’t have the words to present a Black man’s life to the world, to hold that in my hands and know the way I shape every sentence is under the white gaze. And if I get it wrong, if I falter, then white people can turn away, pleased with themselves, knowing they are never implicated. The white system never feels guilty, but I do.

When you know the defendant, you are always on the “wrong side.” Even if there’s more than reasonable doubt, even if the case isn’t proven, even if they’re innocent, you are still made to feel ashamed. The guilt they are assumed to inhabit also spills onto you. It’s one reason why I struggle to write about this. Because we have to apologize for being Black and being here in the first place. We wouldn’t be here if we hadn’t done something, right.

I’m thinking of the title of Sylvia Hamilton’s poetry book, And I Alone Escaped to Tell You. But right now, I don’t want to write the details, to argue exhaustively, to prove as we always have to prove the injustice of this life in a Black skin. To put up for arbitration our innocence. I’m tired of convincing you. I was there. I saw and heard it.

On the first sunny day after he’s convicted, Randy says once, if I were home right now, I could be walking around out there. It’s the only time he’s been less than strong, the same strength that is read by white people as lack of feeling or remorse. And again, I hear in my head, “we’ll walk right up to the sun, hand in hand. We’ll walk right up to the sun, we won’t land.” I have to get us there. I have to find a way to walk us there, step by step, word by word. But I don’t know how I can.