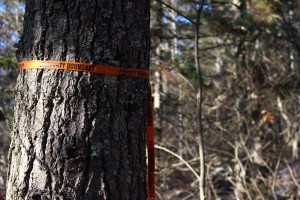 A tree is marked as a boundary for the planned harvest site near Beals Brook in Annapolis County. Photo: Leslie Amminson

Representatives from eight environmental and community groups have a clear message for the province: Stop all cutting on Crown land until the recommendations in the Lahey Report are fully implemented.

That demand was issued at a news conference in a downtown Halifax hotel Wednesday afternoon. It came in anticipation of the province’s response to the November 30 release of William Lahey’s review of his 2018 report.

That review is more than 80 pages long, but it can be boiled down pretty simply: despite a call for a complete overhaul of forestry practices to ensure the future of Nova Scotia’s forests and the industry that harvests them, there has been little to no change in the way logging’s being practiced on the ground.

“Lahey’s recent evaluation confirms what we have been seeing on the ground,” Ray Plourde, the senior wilderness coordinator at the Ecology Action Centre, told a room full of reporters Wednesday afternoon.

“And what Nova Scotians across this province have been saying, reporting, defending, decrying, and even going to court or jail to stop. The situation has reached a breaking point.”

In last summer’s election, Tim Houston’s progressive conservative party had promised to fully implement the recommendations in Lahey’s Report if elected. After winning the vote, Houston’s government tabled an environmental bill that, in part, pushed the implementation of Lahey to 2023. By then, it will have been out five years.

New forest harvests have continued to be approved under old regulations since that report was published. Representatives at Wednesday’s conference agreed these regulations don’t enforce adequate ecological forestry practices.

Plourde led the conference, starting with a short speech in which he held up a pile of documents from the past 14 years that he said had all been neglected by the province. 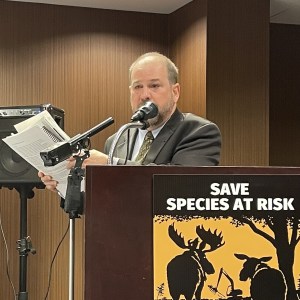 Ray Plourde holds a pile of documents, including the 2011 Resource Management Strategy and the 2018 Lahey Report, that he says the province has ignored over the past decade and a half. He was speaking to media at a conference in Halifax Wednesday. Photo: Ethan Lycan-Lang

Over a decade of inaction

Plourde walked the room through a timeline of government inaction, starting with the MacDonald Government’s 2007 Environmental Goals and Sustainable Prosperity Act (EGSPA). It promised a Natural Resources Strategy, part of which would deal with the province’s handling of forests.

In 2009, the first document of three leading up to that strategy was released. In its executive summary, the document reads: “The status quo is not an option. Current natural resources practices in Nova Scotia for all uses and all users are not sustainable.” That was 12 years ago.

The Natural Resources Strategy came out two years later. One of the major goals outlined in it was to reduce clearcutting to no more than 50% of all harvests in Nova Scotia by 2016. When that date came, a five-year progress report was released, in which the province abandoned that goal. Estimates from the National Forest Database found that at least 80% of all harvests in Nova Scotia from 2012 to 2015 were clearcuts.

From there, Plourde highlighted what he saw as a major folly from the past decade: the creation of WestFor, a consortium of 12 mills, and the government lease of more than 500,000 hectares of Crown land in western Nova Scotia to that consortium. He said the massive lease had given management of too much of what he called “the last wood basket” of Nova Scotia, to a large private entity.

The most glaring, and recent inaction on forestry, he said, remained the failure to implement the 45 recommendations outlined in William Lahey’s independent forestry practices review. (In his recent assessment, Lahey found that five of those recommendations have been fully implemented, while work hasn’t started on about two-thirds of them). 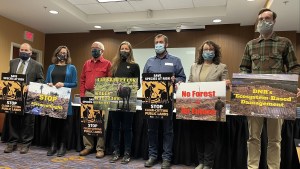 Representatives of seven community and environmental groups hold signs for the camera after giving a media conference calling for all cutting to be stopped in the province until the Lahey Report’s recommendations are implemented and operational. Eleanor Kure of Extinction Rebellion is missing from the photo. Photo: Ethan Lycan-Lang

In light of this inaction, and Lahey’s recent review, frustration, if not exasperation, was evident in the voice of more than one who spoke at Wednesday’s conference.

All speakers were concerned that private industry seemed to have too much influence on Nova Scotia forestry practices and that the Department of Natural Resources and Renewables needed to be more transparent. Biologist Bob Bancroft called it a “rogue department.” Bancroft was representing Nature NS, a network of nature groups in the province.

The Lahey Report identifies perceived industry influence and lack of transparency from DNR — as it was called at the time — as common concerns from people in the forest industry, and “a major problem and a major reason for distrust and lack of confidence in DNR.”

Mike Lancaster, who was representing the Healthy Forest Coalition, told reporters Nova Scotia’s forests had reached a “critical mass point.” Lancaster owns a private woodlot and is concerned about his business, as well as the health of the forests.

“What is it going to take?” he asked reporters. “I personally make a portion of my livelihood and income off of forestry operations. I want to ensure I have a viable future in that field.”

In response to a question about what would happen if Lahey was put off until 2023, as is the current provincial plan, Lancaster put out a ballpark figure of how many trees would be lost as harvests continued to be approved under old rules. Saying he hadn’t seen a decrease in clearcutting in the province in recent years, he estimated an average public clearcut harvest of 20,000 hectares each year. From there he figured another 40,000 hectares of clearcutting would occur before Lahey is implemented, if left until 2023.

That’s about one-third the size of the Tobeatic Wilderness Area, the largest protected area in the Maritimes.

At the end of the conference, all eight representatives signed a letter they intended to send to the province, reiterating their demand that all cutting stop until the Lahey Report recommendations were implemented and operational.

The group said they’d heard the DNRR would be issuing an official response to the Lahey review in the coming weeks and organized Wednesday’s conference quickly to get ahead of it. Brian Taylor, a spokesperson for DNRR, told the Examiner no official public response is planned.

In a CBC article about the recent Lahey review, Michael Gorman reports that Minister Tory Rushton told him he and staff would be reviewing Lahey’s assessment and “making plans.”

On Friday, December 10 released a statement in response to Wednesday’s media conference.

In the statement, WestFor said, “Nova Scotia forestry companies reject the accusations made by a coalition of activists and their call for a harvesting ban.” The activists are calling for a temporary moratorium on Crown land cutting until recommendations from the Lahey Report are put into practice.

As a group of companies that receive some of our wood supply from crown licenses, we are eager to implement ALL of the recommendations in the Lahey Report.

We want to see it implemented as soon as possible. The demand that all harvesting should stop is highly irresponsible and would devastate many businesses and families. It would not move us any closer to implementing ecological forestry.

In the three years since the Lahey Report was published, Crown land cuts have been approved and conducted under interim regulations. On Wednesday, activists told the media they believe those interim measures are inadequate for long-term ecologically sustainable forestry, or for the health of the province’s forests and wildlife.

In its statement, WestFor also denied that clearcutting on Crown land is proceeding at a rapid pace, citing data from the annual Nova Scotia Registry of Buyers reports showing a drop in Crown land harvests from just over a million cubic metres of forest in 2016 to just over 600,000 in 2020. WestFor also said the majority of its harvests leave at least 50% of trees standing.

“We make it in view of the fact that as long as the default is continued clear cutting of our Crown lands, and there’s no incentive for the industry or the department to get it done. But you want to see how quickly they sharpen their minds and sharpen their pencils and get this thing done if suddenly they are not able to access Crown lands. I bet it would be done within the matter of months.”

Representatives from Wednesday’s conference said they are pro-forestry and want to see ecological practices implemented for the industry’s long-term health.

In William Lahey’s recent review of the progress being made on instituting the ecological forestry practices his report recommended, he wrote that progress has almost been non-existent because the interests of industry take precedent over ecological interests:

It is not clear that the department has embraced the ecological paradigm called for in the [report]. Instead, it appears to be still operating within a paradigm in which forest production and ecological systems are regarded as values to be balanced against one another, with the balance in favour of the former where the two come into essential conflict.