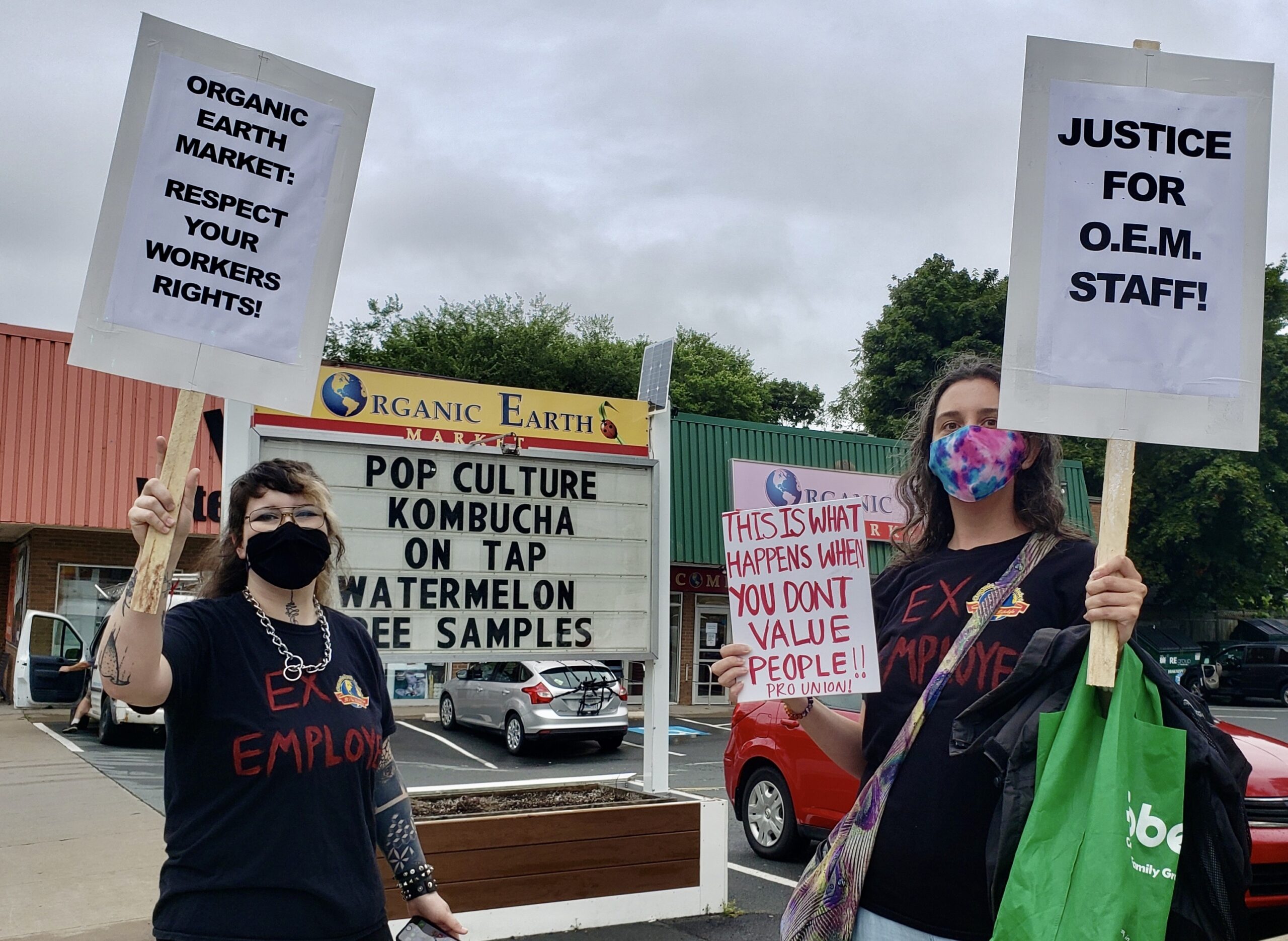 Chanting ‘Hey Organic Earth, respect your staff or this gets worse,’ and ‘What’s disgusting? Union busting,’ workers say they decided to form a union in late July after spending months working through the uncertainty of the pandemic.

In addition to bringing attention to what they say are unfair labour practices, they’re demanding the reinstatement of employee Donna Kim who was fired the day before the successful July 31 union representation vote.

“I was dismissed the day before the union vote because I was suspected of leading the effort. What they did was illegal, and we filed an official complaint to the labour board,” Kim said in an interview Monday morning before about 10 employees began picketing on the sidewalk in front of the store.

“I’ve been working there long enough to observe that there’s been a lot of turnover, too much turnover, and to see that my coworkers have been mistreated continuously. I was not comfortable with that. It was upsetting. It was the sort of mistreatment that indicated to us that we had no basic rights and so we realized we needed basic rights in order to function.”

The unfair labour practice complaint brought forward by the Service Employees’ International Union Local 2 (SIEU Local 2), Brewery, General and Professional Workers’ Union requests that Organic Earth Market reinstate Kim and another employee who were both terminated in contravention of the Trade Union Act.

It also demands the store’s management cease and desist prohibition on union insignia in the workplace, and stop interrogating employees regarding their union support.

“We need changes, people need to be treated respectfully, and we need to feel safe when we have to work,” Organic Earth Market employee Bree Dwyre said in an interview.

“Many people are feeling insecure about their positions. We feel we aren’t valued as employees and that we could be replaced at any minute…Also we didn’t have access to basic things like protection from COVID.”

In its labour board complaint, the union’s statement of material facts notes that while the store required employees to wear personal protective equipment (including non-medical masks) at all times to help prevent the spread of COVID-19, workers were responsible for providing their own.

On July 28, the union says two employees who showed up to their shifts wearing black cloth face masks bearing the SIEU Local 2 logo were ordered to remove them. They were told wearing masks with a union logo while on shift was “illegal.”

The union statement says later that same day, other employees seen via a live surveillance feed wearing the same masks were also instructed to remove them. During the July 31 representation vote, the union says management also told several employees they couldn’t access the voting station while wearing masks featuring the union’s logo.

The union also notes that during the July 31 vote, “an alleged employee” unknown to most staff members was on site most of the day attempting “to persuade employees to vote no.” The union alleges the man was a relative of store owner Jamie Wentzell and was acting as his agent in the workplace to discourage employees from unionizing. 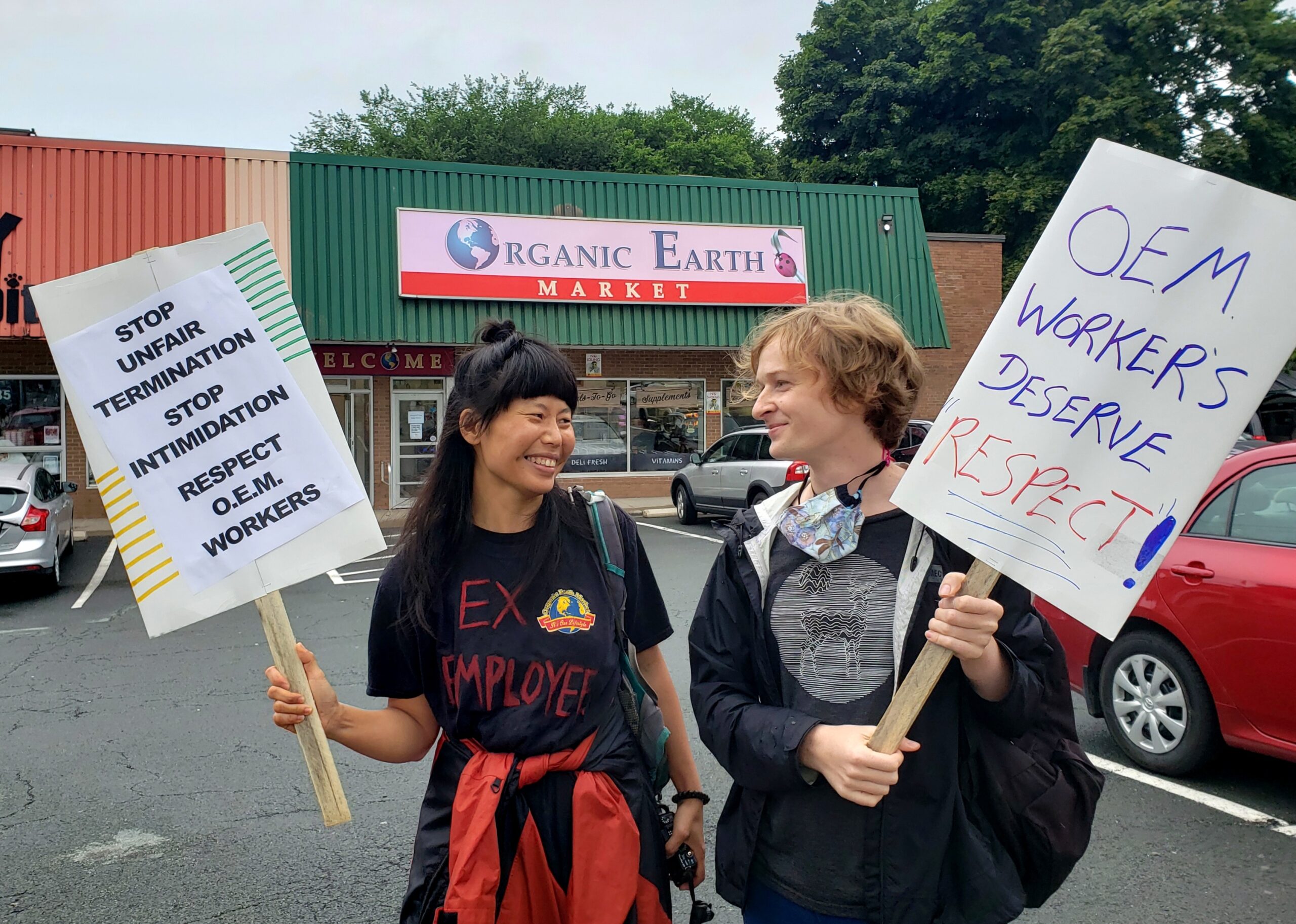 “Post union registration we were harassed, interrogated, fired and treated like we’re disposable,” said Dwyre. “It really wasn’t okay because we could have collaborated to make something great but instead they decided to fight…It needs to be different here. Things need to change.”

Asked what she hoped might happen following their picket on Monday, Dwyre said they wanted Kim’s immediate reinstatement, a halt to harassment of union supporters, and the chance to make the store the best it can be for everyone.

“It’s such a great opportunity (unionizing) and we were excited because it really strengthens our brand as an ethical alternative to the big chain grocery stores,” she said.

Dwyre said she’s optimistic, noting that customers who know about their cause have been supportive.

“They are good people and they value people, and we just want them all to be aware of what’s happening,” she said. “The union itself is the message to the customers.”

Kim is hopeful she’ll get her job back. She said she’s determined to ensure no one else is unfairly terminated. In a short speech to supporters Monday, she said “management has created a culture of fear and a toxic workplace,” a statement met with great cheers and applause.

“Today we just want to create some attention, to assert that we are serious, we want to make these changes, we think it’s a great opportunity,” Kim said during an interview. “This is also going to be the first grocery store in Halifax to be unionized, so it’s kind of a big deal.”

After attending the employees’ information picket, the Halifax Examiner reached out to Organic Earth Market’s owner Jamie Wentzell for comment.

“I think it’s no secret that the union has applied to organize in our workplaces, and our company is responding through the appropriate legal channels,” Wentzell said via phone. “It’s disappointing that they’ve chosen to picket or protest today. We’re working with the lawyers to put our submission before the labour board. That’s about all I can tell you.”

Wentzell said he was absolutely open to trying to work through the appropriate channels to come up with an agreement that would benefit everyone.

“There has been no attempt to work with me on any of these issues so it’s a surprise to me,” he said of comments from employees about a lack of collaboration.

Asked about unsafe labour practices and harassment that his employees were alleging was happening in the workplace, Wentzell said he had no comment.

“We’re responding to all of those allegations,” he said.