“A sizable chunk of property is for sale in downtown Halifax,” reports the Chronicle Herald:

The two buildings at 1521 and 1531 Grafton St. feature 33,861 square feet of office and retail space. Owned and operated by the Archdiocese of Halifax-Yarmouth, they are home to the organization’s head office and several small businesses.

Tom Gerard, a real estate broker with KW Commercial Advisors in Halifax, said developers are most likely to purchase the property and turn it into condominiums.

“That’s who’s got the highest value in terms of redevelopment,” he said in an interview Monday.

This is the building next to the Black Market, with Taz Records on the Spring Garden Road side of the building. 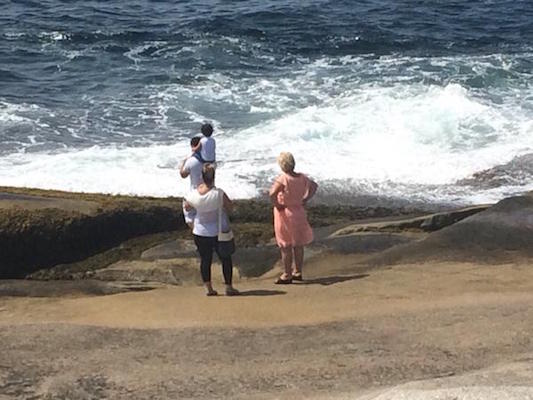 Someone has started a @MoronsOfTheCove Twitter account, showing photos of tourists walking perilously close to the raging water at Peggys Cove.

I guess Twitter is all about shaming and asserting moral virtue, but the problem at Peggys Cove is that for whatever reason the signs warning people off the black rocks don’t have their intended effect. Is that because people are “morons”? I’m not sure what that means, exactly. It is, however, a fact: the signs’ warnings aren’t registering.

I’ve seen a similar situation at Feather Falls in the California Sierra, where the appropriately named Fall River drops a wondrous distance to the rocks below. A three-hour hike takes visitors to an overlook, where a sign warns people from walking on the rocks above the falls. The trail then goes up along the river above the falls, close to said rocks. Every year people ignore the warnings, walk on the rocks, slip or get pulled out by an unexpected current, and fall hundreds of feet to their death.

Are these people simply “morons” and let’s leave it at that? Or is a better or at least fuller explanation that they discount the danger because it isn’t made plain to them? Oh, the water’s low today. I’m a healthy young person who can handle this, not some weak or elderly person that the signs are for. That’s probably just there for insurance reasons.

The signs should be more specific: “X number of people have died here.” Maybe even name those who have died, with their names and photos, and the conditions of the day.

Our society has warning signs for seemingly everything. We’ve all seen ridiculous signs warning of trivial, ridiculous, or remote dangers. So it’s no wonder that people start ignoring the signs — the very proliferation of such signs makes them ineffective. People ignore the boy crying wolf. That’s not moronic; it’s how we sensibly interact with the world.

So the trick is telling people, “yes, boys all over town are crying wolf, but lookee, there really is a wolf here.”

The provincial subsidy for the ferry this year is $13 million.

Campaigns to get people to stop leaving their pets in hot cars seem to be working, reports Metro:

After an incident last year during which police had to be called to break into a car and rescue a dog in distress, [Mic Mac Mall] decided it needed to do something, and hired students to walk the parking lot, looking for dogs in cars.

When they find one, they use a walkie-talkie to call a mall security guard, who comes out with a heat detector to take the temperature in the vehicle and monitor the dog, and then the mall pages the owner of the vehicle.

“We ask that those customers go back to their vehicle and either sit with their pet, or leave the premises,” [mall marketing director Rebecca] Logan said.

That has happened 50-60 times this year, compared to more than 500 last year.

The children did certainly enjoy the (Action Week) events at the Open Hearth Park, on that part I fully agree.

But the failure to look at the senior citizen demographic was certainly recognized by us, the seniors.

There is no parking at Open Hearth Park and seniors would have had to walk many steps to get to an event.

For how many years have the fire works been held at the boardwalk?

And so it begins — leave the old folks out!

To the organizers, why fix something that wasn’t broke and how can no one disagree with the gentleman that said (in this very paper) after all the money that was poured into the boardwalk, how could they abandon it ?

The ironic part of the whole thing is they want folks in the downtown core. Way to go!

So, fire works at the park?

(In previous years) both sides of the harbour were filled with people — in cars, on foot, on the boardwalk — to watch the display set off from the barge in the harbour, which in my opinion is and always will be the best spot in the city.

There may have been an excuse for moving some events to Open Hearth Park, but the fireworks, I don’t think so.

Someone should rethink this and remember you will be old someday!

The city is looking to rent snow removal equipment for the upcoming winter:

The HRM invites tenders for the following equipment, with a qualified operator(s) for snow and ice control services. Equipment offered is to be detailed on the attached form and separate rates submitted for each piece of equipment.

* HRM to be the sole judge or the suitability/acceptance of the equipment provided under this tender. Owner-supplied equipment must be maintained by owner, including fuel. 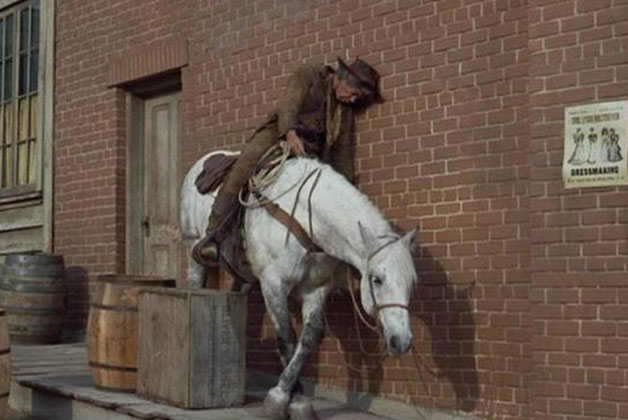 On this date in 1930, the legislature passed the Liquor Control Act, more or less repealing prohibition. This cries out for a celebratory drink on some patio.

Allison Sparling has a knack for making things go viral, and her offhand tweet the other day did just that: 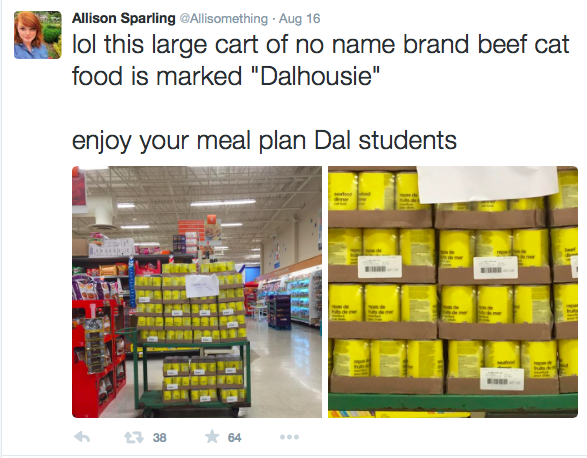 By yesterday, Buzzfeed ran with it under the headline “People Demanded Answers After A University Bought 372 Cans Of No Name Cat Food — A mystery revealed, a campus captivated“: 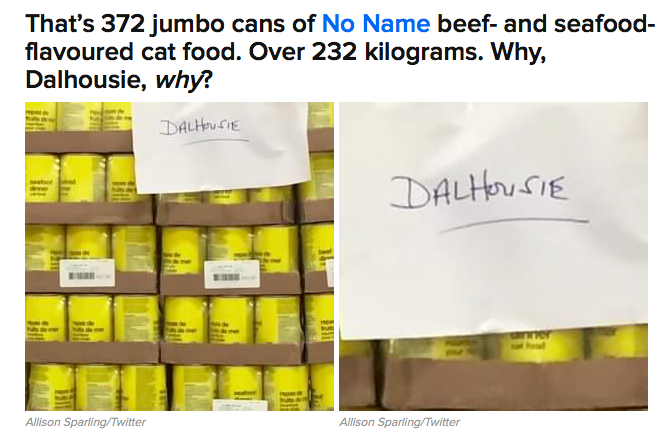 Then, the Dalhousie Gazette did a full investigation of the issue, complete with a map of something or another.

Turns out, Dalhousie has cats.

Investigators with the Special Investigation Section of the Integrated Criminal Investigation Division are conducting an investigation into the circumstances surrounding a crew member who is missing from the Queen Mary 2.

Information received to date leads investigators to believe that the 26-year-old male crew member from Chile may have gone overboard early on the morning of Saturday, August 15 while the Queen Mary 2 was off the coast of Newfoundland.

Halifax Regional Police is considered the agency of jurisdiction given that Halifax was the Queen Mary 2’s next scheduled port of call. This matter was referred to our Integrated Criminal Investigation Division to explore the circumstances surrounding this missing person file. The Queen Mary 2 arrived in Halifax this morning, and investigators are attending the ship today to gather evidence and speak to people who may have had contact with the crew member prior to him going missing. Investigators will also be liaising with other agencies as required.

How slow of a news day is it? Cat food is the big story.