The Utility and Review Board has ruled in favour of EfficiencyOne’s plans for energy efficiency programs.

The UARB ruling cuts EfficiencyOne plan back a bit — it is allowed to spend $102,150,000 over three years, with no allowance for inflation. “The Board has reduced DSM spending [i.e., demand side management, or spending on efficiency measures] by 10%, having considered the history of underspending on DSM programming, the history of overachieving savings and demand targets, and as an inducement to bring greater rigour to the calculations of incentives,” reads the board’s decision. But while the ruling reduces EfficiencyOne’s plan by 10 per cent, it utterly rejects Nova Scotia Power’s attempt to pull the legs out from under the agency.

The short of it is that in the face of a coordinated Nova Scotia Power and Liberal government PR attack on efficiency measures, the UARB has found that efficiency does in fact reduce demand in the long term, and therefore power bills will ultimately be lower than they would be without the efficiency programs. This is what efficiency advocates have been saying all along.

Nova Scotia Power is opposed to efficiency programs because it’s in the business of selling power. The more electricity it sells, the more profit it makes.

The Liberals are opposed to efficiency programs because paying for them means increasing bills slightly in the short term, and the Liberals ran on reducing power bills. It doesn’t matter that gutting the efficiency programs would mean much higher bills down the road because consumers would have to pay for the construction of new power plants — that would be someone else’s problem. 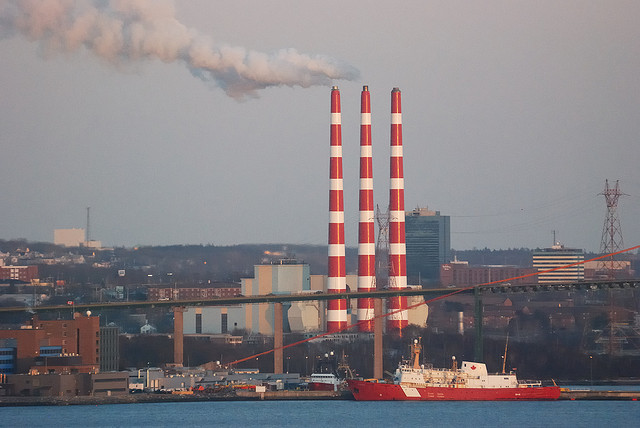 But it was clear from discussions with workers at the station that it wouldn’t be safe for firefighters alone to put out the fire because of the risk of shock injuries.

“It could not be put out because of the high voltage running through it.”

As a result, Nova Scotia Power crew from Ragged Lake was brought in to “de-energize the unit” while firefighters stood by.

“Very shortly after the current was removed from it, the fire went out,” he said.

The fire lasted about an hour.

Someone was shot dead on Stage Road in Enfield yesterday. The RCMP has not yet issued a press release about the incident, but has told reporters that the death is a homicide.

The Rainmen franchise was such a roaring success that some local business people are going to do it again.

The Halifax police department has issued a tender for two Arwen 37 Mark III anti-riot launchers. The launchers can fire plastic or wooden projectiles, or teargas.

There are definitely problems with the fiscal transfer system, but if politicians in this part of the country continue to leave the definition of those problems to Brad Wall and his ilk, their negative impact on our province’s ability to provide acceptable levels of public services at reasonable rates of taxation will only get worse.

About Patricia George-Zwicker’s article “Group homes won’t ruin your neighbourhood, Dartmouth” (Voice of the City, August 6), I feel this is just another example of how you feel that “independent” and “mad at the world” should be in the same sentence. You should not be giving people an audience for such mad-at-the-world rants or rhetoric. I was diagnosed with autism as well, but this is not the entire definition of me and I would have no reason to constantly wallow in how the big bad world has failed me. I can think about bigger things than my selfish adequacy or my need to survive.

I feel that too many group homes in Dartmouth is a problem. All the nuthouses and futile counselling programs have made an uncomfortable wreck of Gottingen Street, and cramming the same types of people into the same area is ineffective at best. Besides, we autistics should not automatically be forced into the group home anyway — I know it would not work for me if I am sometimes best left to my own devices. 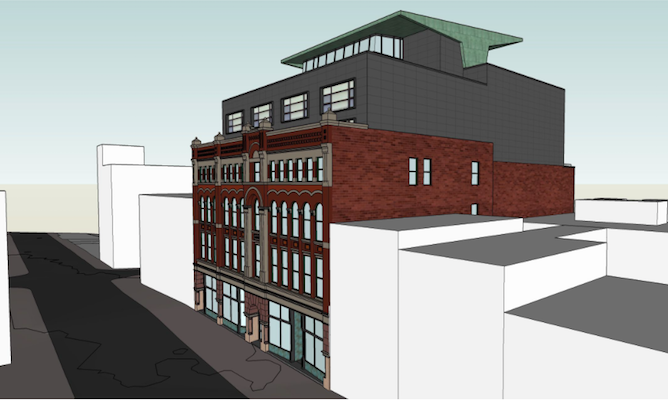 The Barrington Street portions of the building comprise the principle elements of heritage value and the proposal will protect and rehabilitate the portions that carry this significance. These features include entries to the street, masonry walls including elevator shaft and safe vaults, general volume, and floor levels. An addition will be added to the Granville street side and will also extend the building vertically to increase its capacity.

The Granville Street side will have 3 levels of underground parking accessed from an adjacent building development, a ground floor commercial area, 9 residential stories, plus a sculptural rooftop structure housing amenity and residential programming. The Barrington Street side will essentially maintain the original floor levels, including 1 basement, 1 level of commercial at the Barrington level, 3 levels of historic lofts, 2 levels of additional residential plus 1 penthouse. Residential units will have an industrial loft design that will be supported by the exposed historical elements throughout the original building.

The Barrington Street commercial frontage will be reinstated following the original intention of the 1896 design. Granville Street will be revitalized with a commercial façade at pedestrian level. The Granville Street façade as well as the vertical addition will be simple in design and detail so as not to overwhelm the historic character and importance of the original building. Rhythm, materiality and scale of the new portion of the building will be complimentary to the original structure as well as the surrounding historical city fabric.

The original building is referred to as the Green Lantern, referencing a former restaurant tenant of the building. Pulling from this history, the topping roof element will be constructed of a copper green material. It will be set back from street view providing privacy for residents. The design will be modern, sculptural and full of light.

There will be 63 total residential units plus approximately 3,900 sq. ft. of commercial space at grade.

I have no idea why the architect’s rendering of the proposal (above) shows an extension cord running out the front door and across Barrington Street. 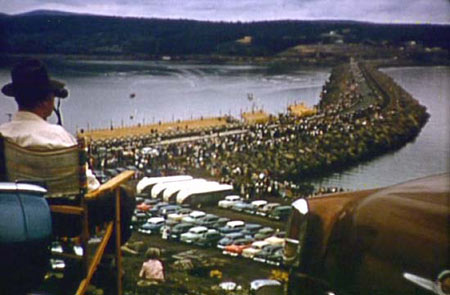 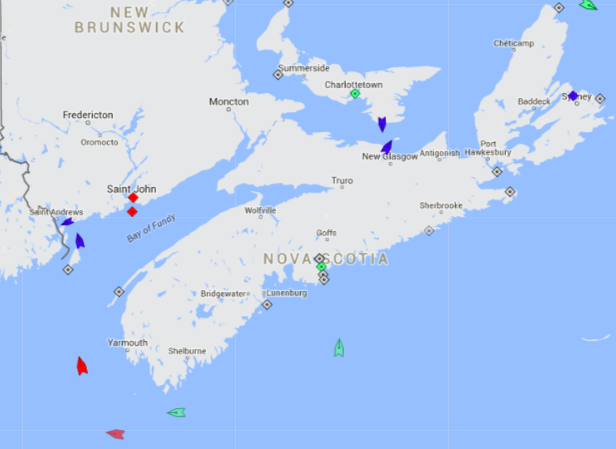 The seas around Nova Scotia, 8:10am Thursday. Map: marinetraffic.com