You are here: Home / Featured / Dozens gather at homeless memorial in Halifax with ‘fierce anger and courage’ 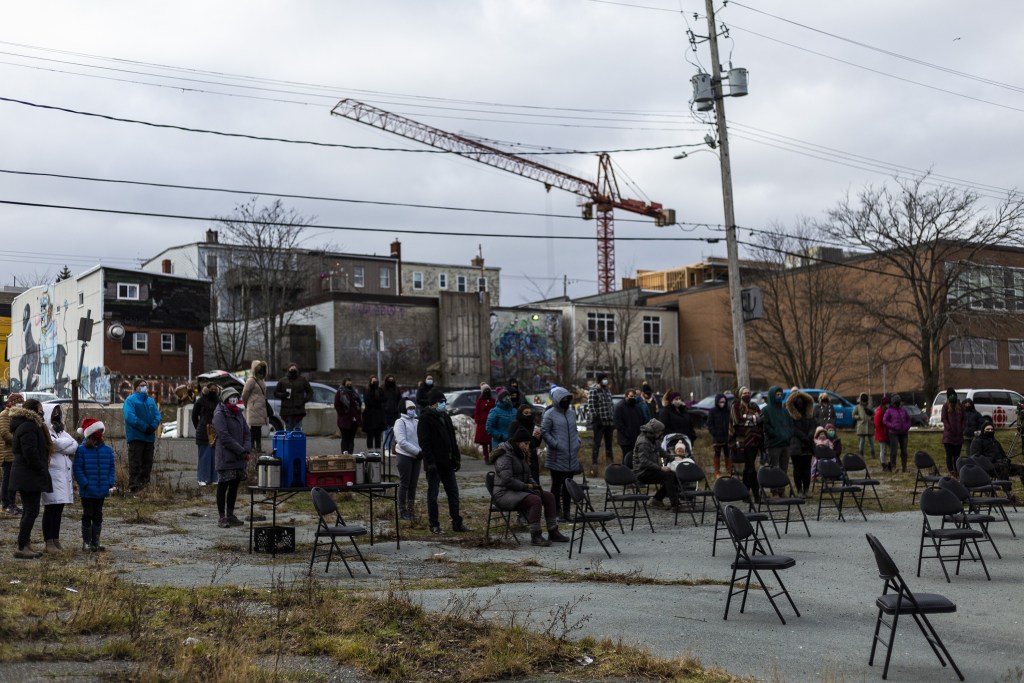 With what one speaker called “fierce anger and courage,” dozens of people gathered in the cold in Halifax on Wednesday for a solemn homeless memorial service, trying to find hope at the end of a dark year.

About 80 people gathered on the property of the former St. Patrick’s Alexandra School, staying apart and wearing masks, to mark the annual memorial.

The event is usually organized by the Affordable Housing Association of Nova Scotia and hosted by St. Patrick’s Catholic Church on Brunswick Street.

“It’s something I typically just come to and sit down and enjoy with other folks, and get to feel sad and get to feel joy and some community,” Michelle Malette, executive director of the Out of the Cold Community Association told reporters afterward.

“This year because of COVID we couldn’t have it inside.” 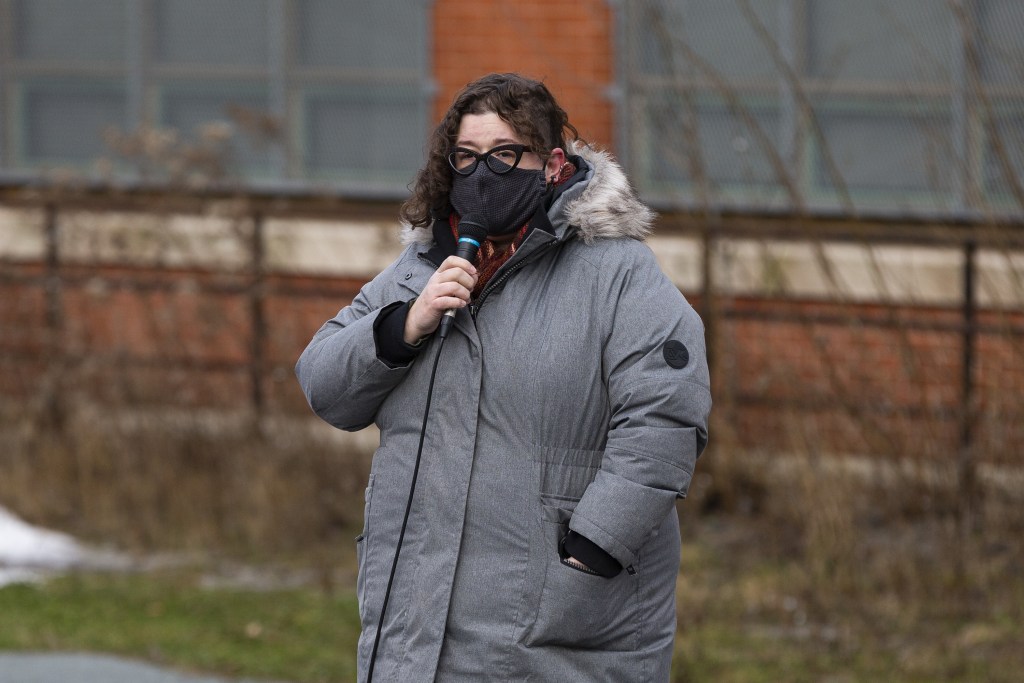 “We were feeling like it has been a particularly hard year for a lot of folks and we thought that it was important that we try to do something and that outside would be OK,” Malette said.

“So we’re out here today in the empty, vacant yard of this building, which should be a vibrant part of this community and has just been sitting here for years.”

The location was no coincidence. The old school has been empty since 2011 as the municipality goes through the process to sell it to a developer. There was a public meeting last month to hear JONO Developments’ plans for two 20-storey towers on the site. Years ago, a coalition of community groups had plans for the now-rotting building, including housing, but lost in court trying to make them happen.

Instead, it still sits empty. 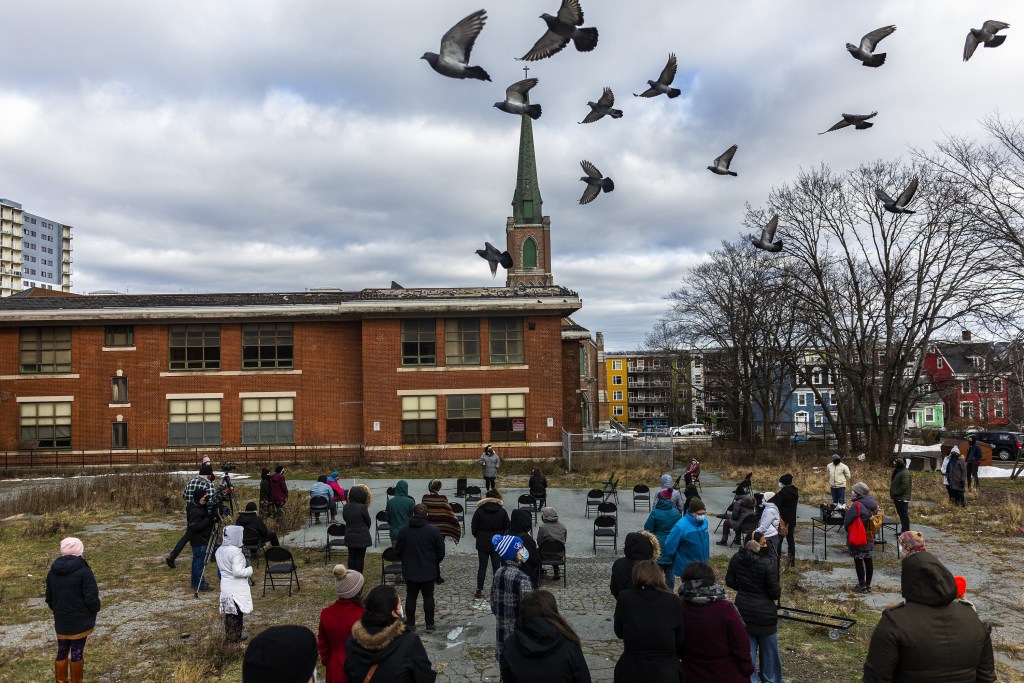 The former St. Patrick’s Alexandra School, long vacant, is seen in the background as people gather for a memorial service on the grounds on Wednesday. — Photo: Zane Woodford

“It hurts everyone’s heart in this community and specifically in the North End. We could’ve gone to Peace and Friendship Park or we could’ve gone to Victoria Park but we decided this is the best spot to be because this is a terrible, terrible waste,” Malette said.

Out of the Cold just opened a new shelter on Barrington Street, but it’s a temporary space.

“The building we’re in now is being torn down, so we’re only there till April and it’s going to be developed, which is pretty par for the course in the city. And we’re going to be looking for a new home,” Malette said.

In the New Year, Out of the Cold wants to move to a supported housing model.

“We’re pretty swamped right now setting up the shelter. We moved in and then about three days later we had 20 people in our building,” Malette said. “And we want to move to having a building like what we have, and stable funding, so that we can continue to support folks that feel they want support and have really high barriers to housing to have a place to live.”

The number of people without a place to live has increased in Halifax of late amid a rental housing crisis. The latest estimate from the Affordable Housing Association of Nova Scotia puts the current number of unhoused people at 489.

On Wednesday, people gathered to remember those who didn’t make it to the end of 2020.

Malette invited people to come up, take the mike, and say the names of those who died this year. They did so, and then there was a moment of silence.

“It’s not OK when someone in our community and one of our neighbours dies because of systems and things that are in place in this community that we all live in and we don’t mark that,” Maletter told reporters afterward.

“It’s so important that we mark that.” 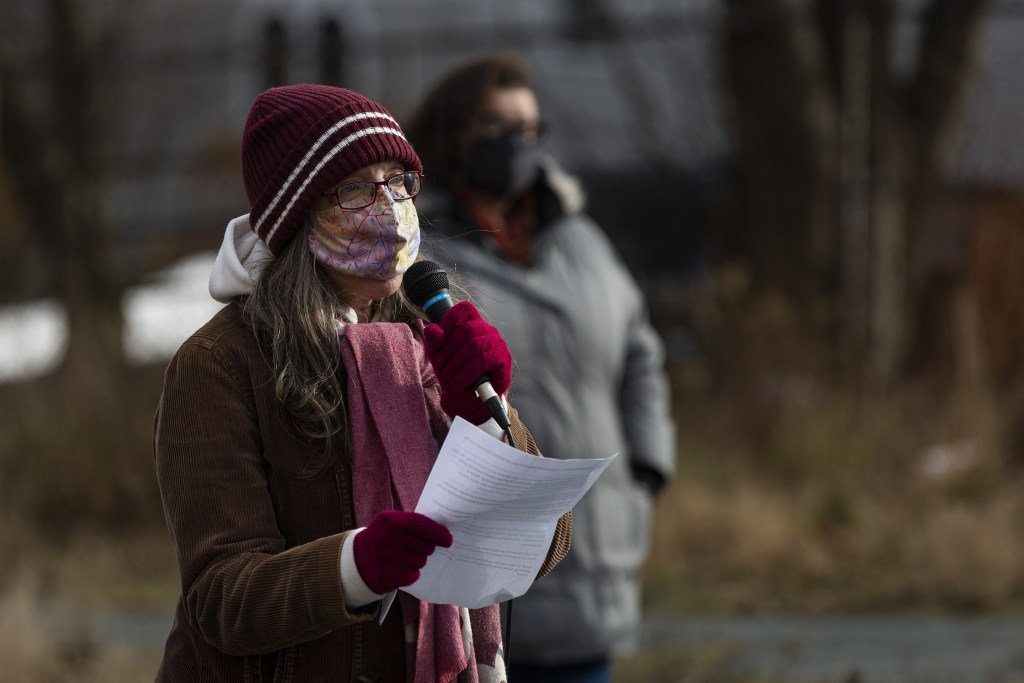 Betsy Hogan, minister at St. Matthew’s United Church on Barrington Street, was the first speaker during the memorial. She spoke at length about a quote she said is misattributed to Saint Augustine: “Hope has two beautiful daughters, their names are anger and courage.”

Hogan argued it would be more accurate to say hope has two mothers — anger and courage:

Anger at the way things are, and courage to change them. These are what produce hope, give birth to hope, make hope actually real and viable and powerful in people’s lives. Hope has two mothers: anger and courage.

Anger certainly is. How can it not be, when hotels are empty and shelters are overflowing? When housing’s at a premium and waiting lists are endless? Anger is certainly here. How can it not be when some illnesses are treated with compassion but others with contempt, like they’re moral failings? When there’s no safety and no warmth and no privacy and no options.

But courage is here too. It has to be because what else explains sheer survival and relentless advocacy and continued care, pandemic notwithstanding, and people standing up for themselves against landlords and evictions and doors that keep closing. There is tremendous courage and resilience and dignity and self worth in this place. And it’s impressive. It’s impressive on its own but when it’s shared, it’s powerful, especially when it’s courage to change the way things are because there’s anger with the way things are because, fake Saint Augustine quote notwithstanding, anger and courage are not the daughters of hope. They’re the mothers of hope.

Hope is what Johnie, a missionary who spoke at Wednesday’s event and didn’t want to give a last name, is trying to spread around the city.

“That’s the main thing for people because they’re getting to the end of their rope,” he said in an interview after the memorial. 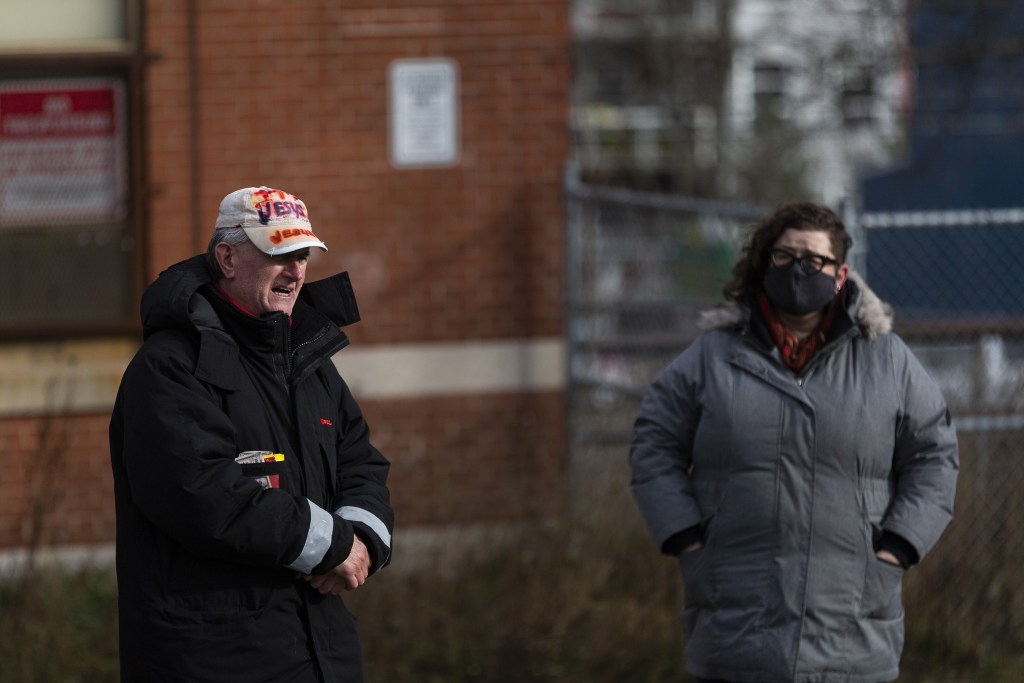 Johnie, a missionary, speaks during the memorial as Malette looks on. — Photo: Zane Woodford

Johnie hands out flyers with messages like, “You’re a special person” on the front and religious messaging inside.

After moving back to Halifax a year ago, Johnie was on the street for 10 months. He was surprised after living in British Columbia to find homelessness here was getting as bad as out west. He finally found a place a few months ago. He’s getting by, but it’s expensive and he knows people just can’t find a place to live.

“It just seems to me that people don’t seem to want to care for people,” Johnie said. “We’ve got to start caring for people.”

Johnie hopes he won’t be remembering some of his friends next year.

“We hope no one dies on the street over the winter,” he said. “I’ve got a friend of mine, he’s gotta get through the whole winter. All he wants … is a place to live, a bachelor.”

Asked what she wants people sitting in their warm homes to think about over the holidays, Malette said it’s important that they make it known that they care:

Everyone’s doing a lot of frantic fundraising to try to support the things that they do, everyone doesn’t have enough money. But in reality, what is important is for regular people to say loudly and continuously and forcefully that they care that there are people in the city that are their neighbours and people we know and people we walk by in the street that do not have a home. They don’t have a safe home, they don’t have an affordable home. It’s a daily heartbreak for people and people just want to live. Everyone is entitled to a house. People just want to have a home.