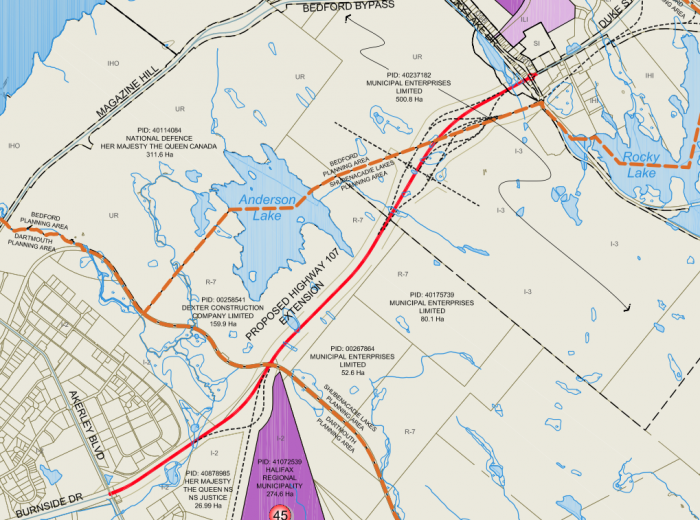 The proposed Burnside Expressway, back when the province was still negotiating with Dexter/The Municipal Group for land. 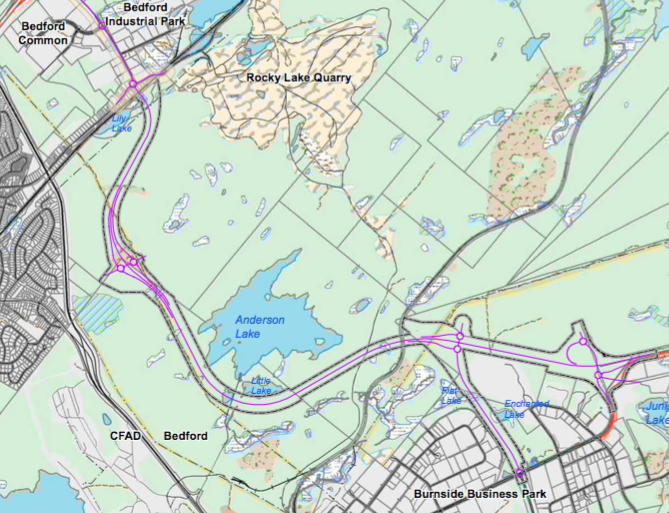 The newly proposed alignment of the Burnside expressway, currently paused at the environmental assessment stage.

From 1991 up until sometime in 2012, the plan for the Burnside expressway was a shorter, more direct route than is currently proposed. Since it was conceived, the plan had been to build the road north of Anderson Lake, a relatively straight shot from Burnside Drive to Duke Street in Bedford. Then in 2012, the routing was changed to curve south of Anderson Lake, almost adjacent to Magazine Hill, then come back north to meet Duke Street.

Why the realignment? Butler continues:

It turns out that sometime in the 90s, Municipal Enterprises Limited — (MEL, aka Dexter Construction, aka the group of companies that dominates nearly every contracted service in HRM, and operates the Otter Lake dump) — acquired the land surrounding most of Anderson Lake’s north side.

MEL’s estimation of its acquired property has grown over the years, though exact figures are redacted in provincial documents obtained by the Halifax Examiner in a freedom of information request. In 2010, the same year that the provincial government declared its intention to build a highway along the northern alignment and reserved the necessary land as per the Public Highways Act, MEL’s estimate of value increased. Then in 2012 or 2013 MEL “hired a reputable land appraisal company” and its estimation of the land’s value increased again. It’s at this point that NSTIR abandoned the shorter, northern route in favour of the longer southern option.

Minister’s briefing notes dated March 25, 2013 indicate that NSTIR’s estimate of the land’s value was considerably less than Municipal’s, but that “due to the drastic difference in value, it will likely be litigated before the UARB [Utilities and Review Board, a panel of appointed legal experts that have jurisdiction over these things]. MEL is not expected to be cooperative. It is anticipated that they would come in with a value over the initial [redacted amount].”

Click here to read “The Burnside Expressway was realigned and it’s going to cost commuters lots of time, money, and pollution.” 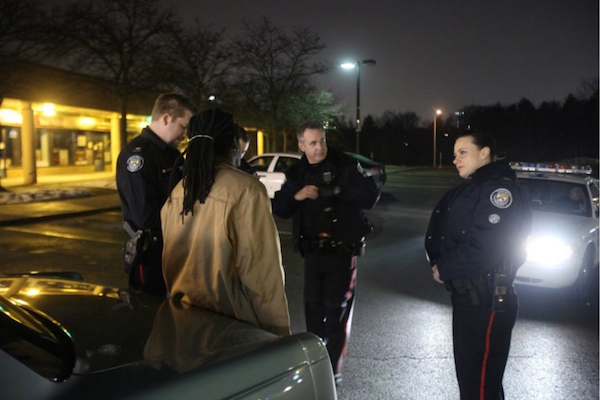 If there’s anyone at all in the Black community who supports a slow review of police street check data to determine whether the checks are indeed racist, there’s no indication of who those people may be. Rather, reports Robert Devet:

Recently a broad coalition of African Nova Scotian organizations demanded, among other things, that street checks be halted immediately, regardless of the analysis that is taking place.

“If you get stopped by police again and again, and you happen to be a part of a group who happen to be Black people in their own communities, without any wrongdoing, what do we call that? I call that racial profiling,” says Godfred Chongatera.

The coalition issued its demand that the practice of police street checks be stopped immediately in response to a report issued by the UN’s Working Group of Experts on People of African Descent after visiting Halifax, Toronto, Montreal and Ottawa late last year. 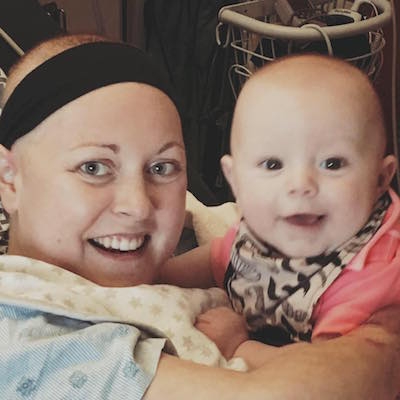 Wagners law firm issued a press release (read it here) yesterday saying it had filed a lawsuit on behalf of Lindsey Hubley, a woman who gave birth on March 2, “and who was diagnosed four days later with necrotizing fasciitis, otherwise known as flesh-eating disease.”

The suit hadn’t yet been indexed in the court’s computer system when I stopped by at 4pm, so I haven’t read it.

But, reports Aly Thomson for the Canadian Press:

Lawyer Ray Wagner said a statement of claim filed in Nova Scotia Supreme Court Wednesday alleges that the negligence of five doctors and the hospital caused or contributed to the health issues suffered by Hubley.

Wagner said it’s alleged part of the placenta was not removed at birth, and that she had a tear on her vagina that required sutures, which could have contributed to her health issues.

He said it’s also alleged that when Hubley returned to the hospital on March 5 with abdominal pain — the day after being discharged following the birth — an examination was not performed.

She was later diagnosed with flesh-eating disease, and has since undergone multiple surgeries, including amputations below both of her elbows and knees and a total hysterectomy. 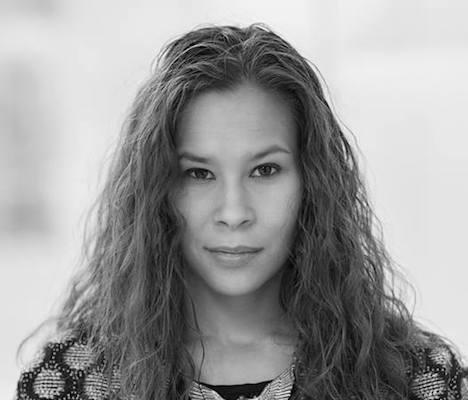 I’m reluctant to discuss Frank Magazine — I don’t like to punch down.

But this issue involves Examiner contributor El Jones, so I’ll let Michael Tutton at the Canadian Press relate the story:

A cartoon in a satirical magazine that depicts a black poet and activist with a jutting chin and sloping forehead is being modified after critics who call it racist launched campaigns to remove the magazine from stores.

Andrew Douglas, the managing editor of the Atlantic region version of Frank magazine, apologized to readers on Tuesday, saying he’s fearful that the depiction of El Jones among a group of protesters in the cartoon could attract racists to the publication.

Sarah Dunsworth, an actor on the “Trailer Park Boys” series, said on Twitter the “racist harassment … is disgusting and shameful,” and is among those calling for a boycott.

Jones said in an interview that she views the cartoon as a throwback to racist images in magazines in the 1800s that depicted African men and women as having features closer to primates than Caucasians.

“It’s an animalistic way of representing Africans as monkeys … Anyone familiar with the history of racism and the history of racist depictions can see this immediately,” said Jones, who holds a women’s studies chair at Mount Saint Vincent University and is a former Halifax poet laureate.

She said such depictions were part of a wider racist movement once prominent in mainstream magazines that aimed to depict Africans as having lower intelligence.

Dunsworth has called for stores, including the Sobeys chain, to pull the latest issue off their shelves.

“Weeks of construction and long traffic lines have more and more Haligonians using bus lanes as a quick fix to get ahead — which police say only adds to congestion and can prove expensive for those caught,” reports Haley Ryan for Metro:

Halifax Regional Police issued 14 tickets Wednesday (most for failing to obey a traffic sign regarding the bus lane issue, which is $180) over an hour and a half on the Bedford Highway near the intersection with Main Avenue. Another 20 were issued over two hours on Tuesday — the highest number Const. Shawn Currie has seen although he knew there were even more he couldn’t get to. 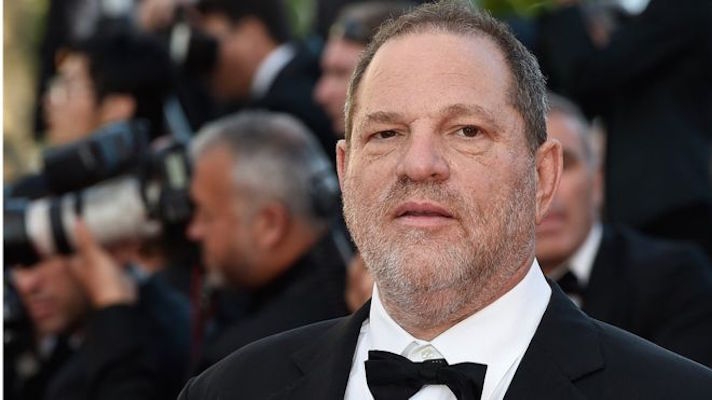 “Over the past year the Nova Scotia government has committed $7.6+ million to Weinstein Company productions, and less than 1% of all film and television funding to companies owned by Nova Scotian women,” notes Paul Andrew Kimball. “It’s time to seriously rethink our priorities, and our business model.”

Is that a cheap shot? Probably — it’s unlikely that anyone locally knew about Weinsteins’ abhorrent behaviour. But if that’s the excuse we need to examine how we dole out production money, who benefits, who doesn’t, and why, then so be it. 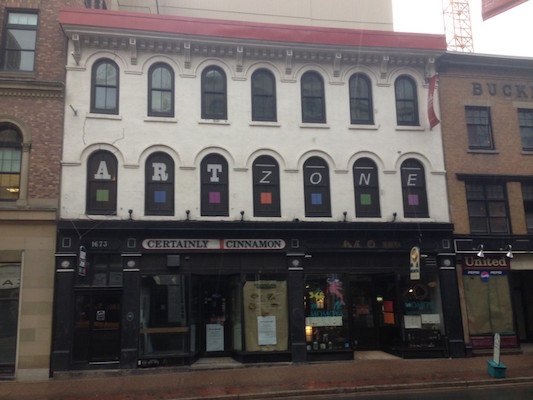 “The Italianate style was common in Canada from 1850-1870,” writes Peter Ziobrowski. “It was particularly popular for commercial buildings in Halifax, possibly due to a number of large fires requiring reconstructing entire blocks of the city.”

Ziobrowski goes on to discuss many of those buildings in detail.

Since 1972, they have displayed the words “Canada’s Ocean Playground.”

I don’t think we want to be a seasonal province or a service-only economy.

I don’t think we want to imply that we are full of isolated resorts for the rich. The words leave out our people and our diversity, and only barely hint at the beauty of our landscapes.

At the same time, the words don’t convey warmth and hospitality. They don’t have heart.

I’ve long felt we should add words to the slogan: “Don’t make waves in Canada’s ocean playground!” would be a good description of our most notable provincial characteristic.

But Urbaniak has a perhaps better idea: “Peace and Welcome.”

Volunteer – Info Session (Thursday, 6:30pm, Halifax Central Library) — you can be on a city board, committee, or commission. Well, probably not you, but somebody with better manners and more patience can. And if they want to do that, they should click here.

Experimental mathematics is an approach through computation to investigate mathematical objects and identify properties and patterns. Due to the functions and commands of mathematical softwares, plenty of options for presenting and visualizing numbers and sequences can be easily found and applied. Therefore, the first part of the talk will present several of these methods from different problems, in number theory and combinatorics. Focusing on Bernoulli numbers and Bernoulli polynomials in the second part, combinatorial and probabilistic representations/visualizations follow, interpreting Bernoulli numbers/polynomials in terms of random variable, binary tree and lattice paths. 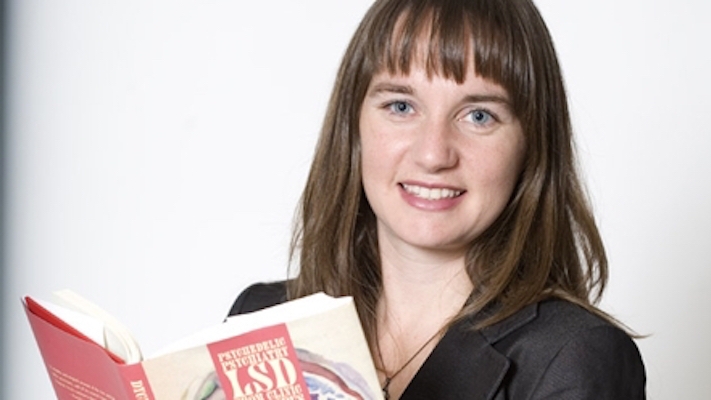 Erika-Dyck. Photo: University of of Saskatchewan

Psychedelic Substances (Thursday, 7pm, Alumni Hall, University of King’s College) — Erika Dyck, from the University of Saskatchewan, will speak on “Who is Keeping Tabs? Psychedelics, Science, and Drug Policy in the 21st Century.” From the event listing:

Psychedelic substances fell from medical grace nearly half a century ago, but recent activity suggests that they may be making a return to research. The psychedelic renaissance, if there is one, remains plagued by competing interpretations of effective drug regulation, ethical experimentation, and the role of spirituality in medicine. Join Dr. Erika Dyck, Canada Research Chair in the History of Medicine, University of Saskatchewan, for a presentation on the political and medical history of psychedelics and how those past lessons might apply to medical research in the age of evidence-based science and drug policy.​

Dr. Dyck is the author of Facing the History of Eugenics (2015), Psychedelic Psychiatry: LSD on the Canadian Prairies (2012, Managing Madness (2017) and The Uses of Humans in Experiments (2016).

Canada’s Fisheries (Thursday, 7pm, Ondaatje Theatre, McCain Building) — Julia Baum from the University of Victoria, Stephanie Boudreau from Fisheries and Oceans Canada, Susanna Fuller from the Ecology Action Centre, and Coilin Minto from Galway-Mayo Institute of Technology, Ireland, will speak on “25 Years After the Cod Collapse: The Future of Canada’s Fisheries.”​ 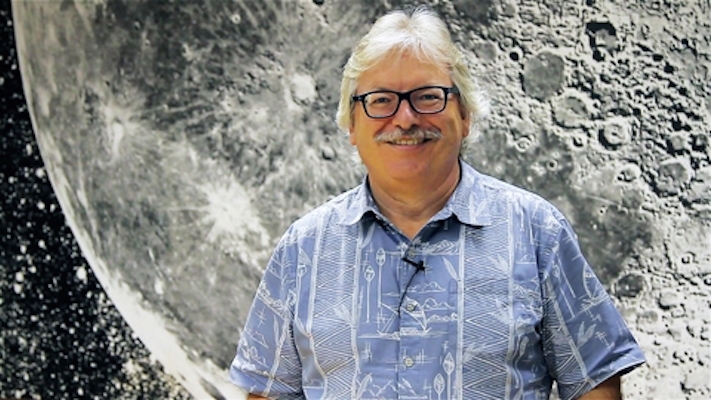 Black Holes and the Fate of the Universe (Thursday, 8pm, the auditorium named after a bank) — Günther Hasinger from the University of Hawaii, will speak. Bring your own black hole.

Obesity Management in 2017 (Friday, 9am, Auditorium, QEII health Sciences Centre) — a conference focusing on the education of obesity as a disease and its management. Fee: $25, RSVP [email protected]. 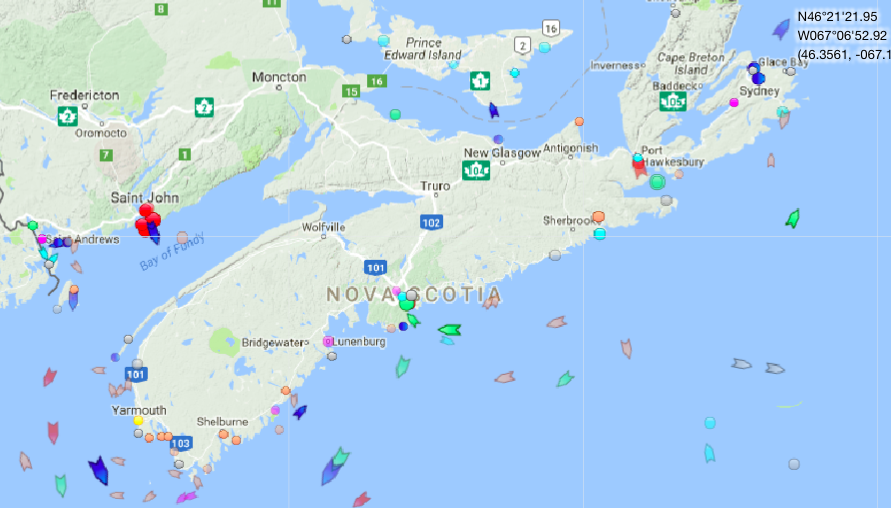