You are here: Home / Featured / Don’t fence me in: adventures in city de- and re-construction

1.  Gold fever and our water supply 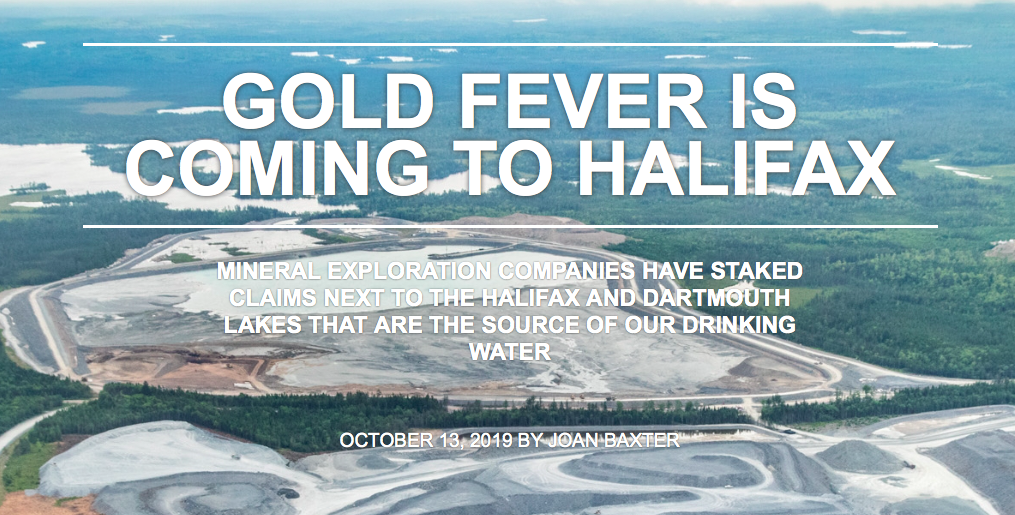 Joan Baxter reports that mineral exploration companies have staked claims next to the Halifax and Dartmouth lakes that are the source of our drinking water.

Click here to read “Gold fever is coming to Halifax.” 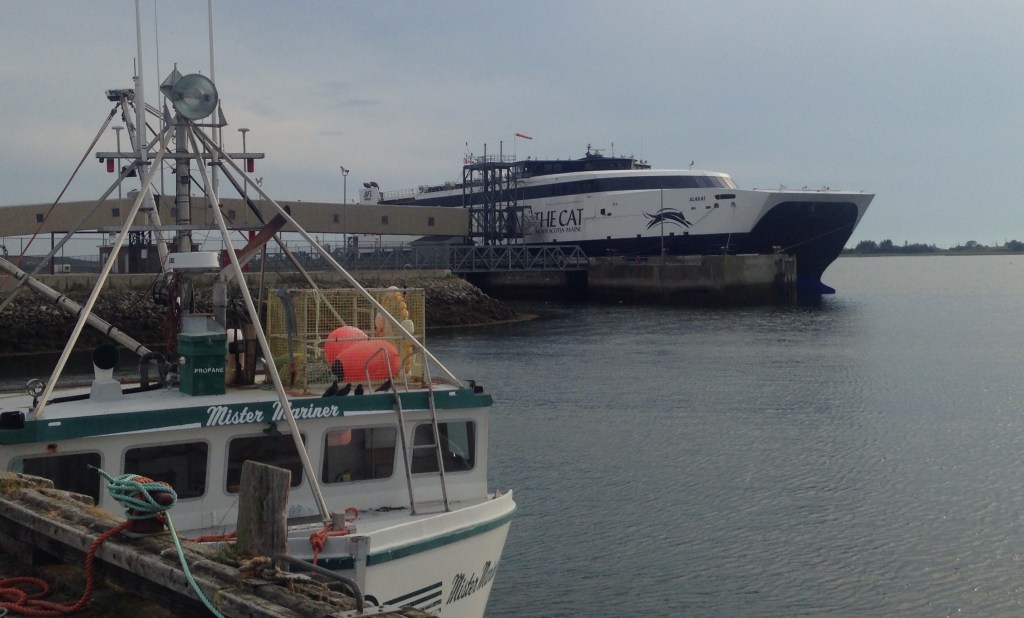 Last May, there was a ground-breaking ceremony at what was then the off-season, nobody-home-but-us-glad-handing-politicians’ Yarmouth International Ferry Terminal. The purpose of the event was to announce that CBCL Engineering had been chosen to oversee a major $9-million facelift at the terminal, the Nova Scotia entry-point for tourists arriving by ferry from the US — if and when there’s a ferry. The project was to be jointly financed by the federal, provincial and municipal governments.

“This is a great day in Yarmouth,” proclaimed Mayor Pam Mood.

And it seemed it was. At the time, the Yarmouth-Bar Harbor ferry service was still scheduled to begin its 2019 sailing season in less than two months. “To not interrupt regular ferry service,” officials optimistically declared, “CBCL will concentrate [on] project planning during the operational season (spring and summer) with heavy construction activities taking place in the off-season (fall and winter). Major demolition and construction will begin this fall.”

On Sept. 30, CBCL dutifully announced it was preparing to call for bids for Phase 1, “a combination of demolition and construction projects.”

But here’s the rub. You knew it was coming, didn’t you? Recall that when the infrastructure project was first announced in May, the cost was pegged at $9 million. Between then and now, CBCL had redone the math, and $9 million “will not complete all of the required work originally outlined for Phase I.” CBCL’s new estimate is more than double the original: $20 million.

Click here to read “The curtain falls on this year’s ferry follies… but there’s always next year.”

“During its irregular monthly meeting Wednesday (at 9:30 AM), CBRM council unanimously approved funding for a helipad as part of the second cruise ship berth,” reports Mary Campbell for the Cape Breton Spectator:

The funding ($100,000) had been earmarked for an extension to the Sydney boardwalk which we don’t need anymore because the Marconi Campus of the NSCC is absolutely no doubt about it going to be built on the waterfront.

There doesn’t seem to have been any discussion of other possible public uses for the money, but let’s face it: if you leave $100,000 lying around the Civic Centre, it won’t be long before someone thinks of a private business that could benefit from it, and in this case, it was our own mayor who recommended that council re-assign the money to a helipad, explaining:

And as a cruise terminal, it would provide us for Canada, Eastern Canada but, I know, likely all of Eastern North America, to be the only cruise pavilion with a heliport attached to it for excursion and opportunity that competitively position us…”

Campbell hilariously quotes helipad supporters Rodney Colbourne of the Ben Eoin Development Group; Cabot Links general manager Andrew Alkenbrack (“but then again, his boss thought the public should build him a $28 million airport”);  Dennis Campbell of Ambassatours; Port of Sydney CEO Marlene Usher; and Parker Horton, CEO of Breton Air, “the helicopter operator that stands to be the biggest beneficiary of the plan.”

Campbell goes on to unpack the mystery math of cruise ship passengers getting on helicopters to gawk at Cape Breton, and concludes:

I learned a word this week that describes the way politicians manage to see value in schemes like this  — “handwavium.” Strictly speaking, it applies to science fiction writers who “wave their hands” at “reality and hard science for the sake of the plot” but I think it could apply equally well to elected officials who “wave their hands” at financial realities for the sake of infrastructure they think is cool (and the chance to meet the demands of the business community, which in this case seems to be employing some handwavium of its own to make this plan look reasonable.)

And what’s in it for us? Well, according to Horton:

Yes, those of us who can’t afford a tour can press our faces up against the fence and gape at the flying machine. 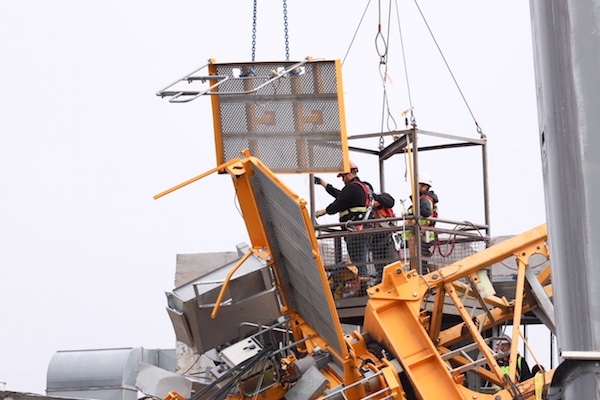 Workers remove the catwalk from the fallen crane. Photo: NSTIR

The Department of Transportation and Infrastructure Renewal issued a press release yesterday updating the status of the crane removal on South Park Street:

Several sections of the crane that collapsed over a building in Halifax during last month’s hurricane were removed today, Oct. 14. The front jib, the counterweight jib and the top portion of the front boom were taken off the Olympus building. The catwalk was also cut and removed from the boom on Sunday.

As a safety measure, Halifax Regional Fire and Emergency were on site hosing down the Olympus building to make sure sparks from the welding didn’t cause a fire.

As a result of the work completed this weekend, the evacuation order has been lifted for two buildings: 5690 Spring Garden Rd. and 1491 South Park St. Residents can reoccupy these buildings immediately. All other evacuation orders remain in place at this time.

“This is challenging work and safety continues to guide every decision we make,” said Lloyd Hines, Minister of Transportation and Infrastructure Renewal. “I want to thank the crews who worked through the weekend to remove the first sections of the crane. This is complex work and each detail of the removal is carefully planned with safety in the forefront.”

Over the next several days, the heavy-lift cranes will be repositioned to prepare for cutting up and removing the main tower. Supports will be put in place around the fallen crane’s tower and necessary preparation work will be completed to ensure the safety of the workers and others in the area. The removal of the tower is scheduled to begin Saturday, Oct. 19, weather permitting.

Crews are working carefully to keep the crane stabilized and protect themselves, the public and surrounding infrastructure from falling debris.

Further information will be provided as soon as available. 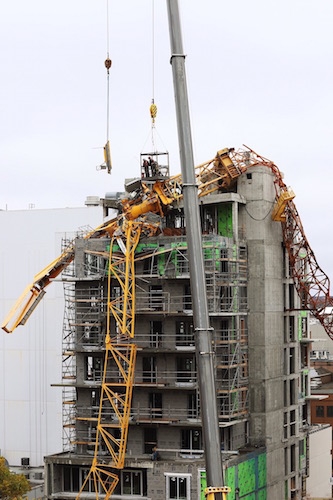 A broader view of the crane removal operation. Photo: NSTIR 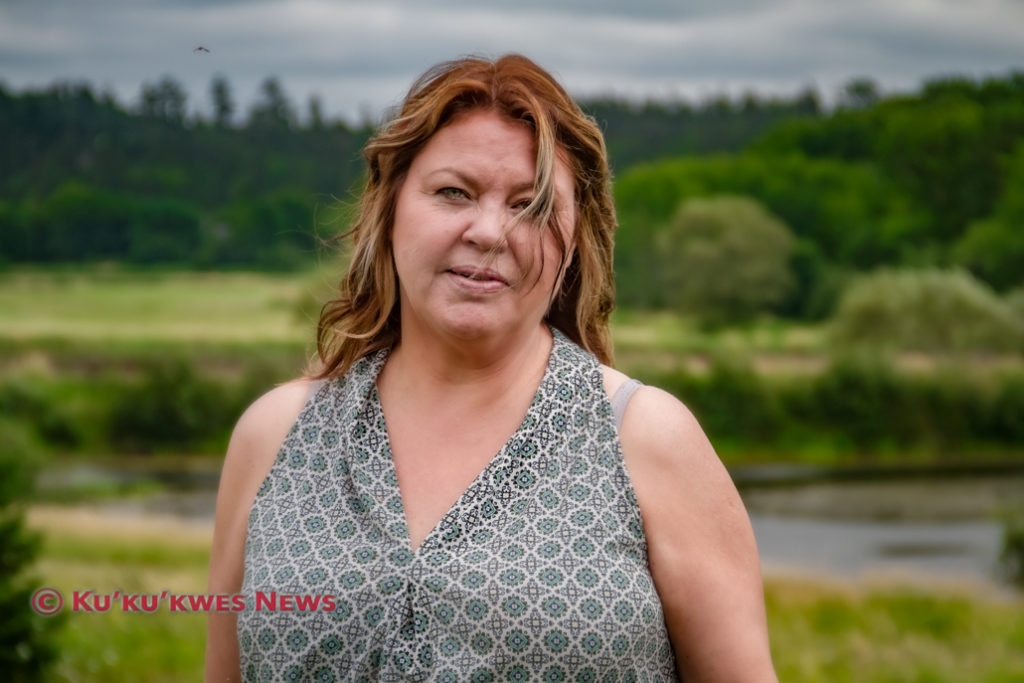 “Morley Googoo has been suspended from his position as Assembly of First Nations Vice-Chief for Nova Scotia and Newfoundland while the AFN investigates allegations he harassed women while serving in his role as vice-chief,” reports Maureen Googoo for Ku’ku’kwes News:

According to the confidential report, a complaint was made against Googoo by Cheryl Maloney, the former president of the Nova Scotia Native Women’s Association, while she served as the NSNWA’s liaison to the Tripartite Forum.

In her complaint, Maloney accused Googoo of attempting to remove her and the NSNWA by trying to force a reorganization of the Tripartite Forum in the fall of 2016. She accused Googoo of damaging her “reputation and ability to engage in her advocacy work by maliciously relaying negative information about her, particularly to the Chiefs.”

Googoo has denied the allegations made against him in the report.

Bunkhouses ridden with bedbugs and rats.

These are among the thousands of concerns raised by Mexican migrants working on Canadian farms under conditions marked by health risks, extreme isolation and even violence — despite participating in a federally regulated program meant to guarantee basic protections.

The complaints reveal for the first time a record of living and working conditions made by seasonal agricultural workers, in their own words, to Mexican Ministry of Labour officials at the end of every growing season in Canada. The Star has obtained 3,100 such grievances made since 2009, which describe not just extreme cases of abuse, but serious inadequacies in protecting those experiencing it.

The Mexican authorities do not share the vast majority of these complaints with the Canadian government.

“The stories that we’ve been hearing literally for decades occur again and again and again,” said Fay Faraday, a human rights lawyer and assistant professor at York University.

“Yet there has been no movement to make alterations to the structure (of the program).”

Star Halifax reporter Taryn Grant localized that story by looking at the Nova Scotian complaints in the documents:

Between 2009 and 2018, temporary foreign workers lodged thousands of complaints with the Mexican government about their Canadian employers.

In those years, the Mexican labour ministry recorded 89 complaints connected to Nova Scotia farms, including being forced to work without pay, living in a snake-infested bunkhouse, and not being allowed to go to the bathroom during working hours.

“We were put in a hotel for 15 days … after that we were put in an abandoned church where there were 36 of us. It did not have bathrooms,” read one complaint from 2012.

Separate accounts from 2016 and 2018 complained of bunkhouses with no running water. Workers said in one case their employer told them to get water from a river after work. In another case, workers said water was made available, but it was “very dirty.”

A 2018 complaint read, “The rooms have no windows and the beds are just metal frames with mattresses that are in a bad state. There are five rooms and two stoves for 14 people.”

This is great reporting by the Star and demonstrates what its coordinated bureaus can achieve. Finding the Mexican documents is reporting gold, and congratulations to Mojtehedzadeh for the discovery and to the many local reporters like Grant for the followup.

Robert Devet connects the Star report back to the to-do earlier this month when the CBC reported that Kate Storey, a Green Party candidate in Manitoba, called the temporary foreign worker program “modern-day slavery” during a candidates’ debate. 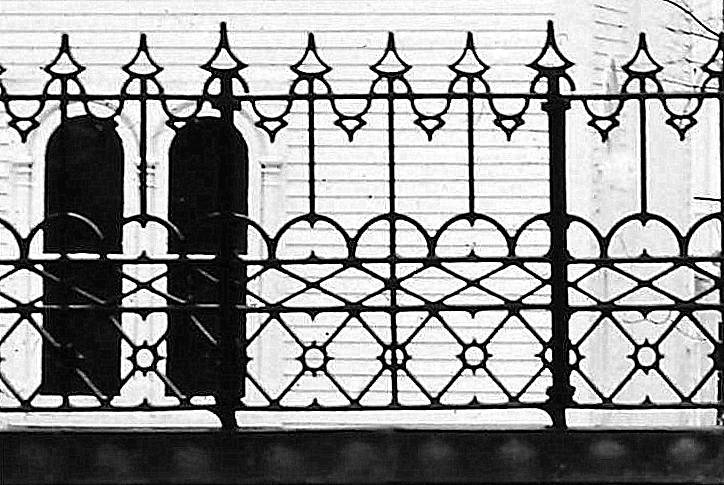 “When walking in downtown Halifax it’s likely you regularly pass, without paying too much attention, the cast iron fence that surrounds Saint Paul’s church on the Grand Parade,” writes Stephen Archibald. “Well, next time take notice, because last spring restoration started on the fence and the results are beautiful.”

Archibald provides lots of before and after shots of the work, and muses about the importance of such features:

Old iron fences are a defining feature of our streetscapes in Halifax: the Public Gardens, the Legislature, Government House, Saint Paul’s Cemetery, are all viewed through a transparent screen of ancient iron. A passerby may not consciously pay much attention to the Saint Paul’s fence, but it makes the experience of walking down the street more interesting.

Halifax and West Community Council (Tuesday, October 15, 2019) — the development agreement for the Willow Tree building is before the council. Hey, whatever happened to the IWK thing?

My very quick read of these bills is that Bill 177 basically protects Nova Scotia Power’s interests in the tidal generation projects and Bill 187 adds four seats to the legislature to add Acadian representation. There hasn’t been enough discussion of either bill. 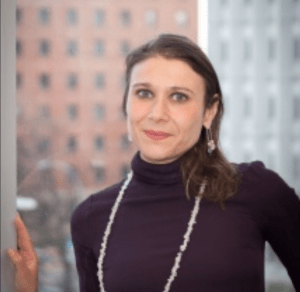 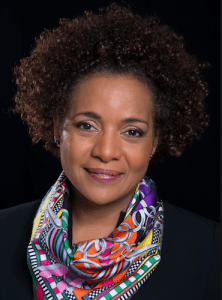 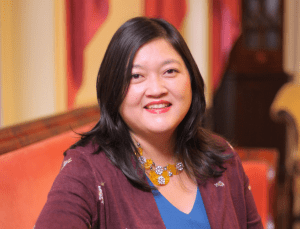 I voted yesterday. There was a ~30 minute line at the Sportsplex, and the poll workers told me it was that way all day, and busy all weekend. I liked seeing so many of my fellow voters bringing their children to the polls, teaching the young ones about the importance of their civic duty.