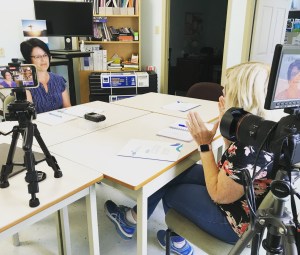 Behind the scenes of the filming of Deserted. Photo: Ian Wilson

A local filmmaker behind a recent documentary on food deserts in communities across Nova Scotia said he hopes his film sparks a larger discussion about food insecurity in the province.

Ian Wilson, who lives in Dartmouth and has previously produced several short films, directed and narrated Deserted, a documentary sponsored by the Lunenburg Doc Fest and its seniors program. Wilson, along with Mary Wilson and Shirley Hardin, are the film’s writers and Tim Reeves-Horton was the mentor and producer.

“It affects both rural and urban communities. It affects older folks and it certainly affects those with lower incomes, but it affects urban and rural folks in different ways as well,” Wilson said in an interview with the Examiner. “And we also wanted to follow some of the people who are impacted by living in a food desert. Kind of following their stories where we could, and see what solutions what they had.” 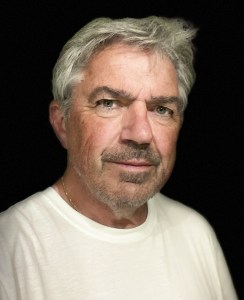 The documentary looks at food deserts in communities including Middle Musquodoboit, Upper Big Tracadie, Millbrook, Dean Settlement, and outside of Bridgewater. In some of the these communities, the drive to get groceries can be anywhere from 30 to 60 minutes. And many of the people living in these areas may not have cars. The rural communities don’t have public transit, and while there may be some community transit options, those cost money, too. In some cases, residents carpool or ask neighbours to pick up grocery items for them.

“It’s very common to see on Facebook [a comment that says] ‘I’m going to town Tuesday. Does anyone need anything?'” Kathy Spearing, who lives in Dean Settlement, said in her interview in the film.

Some communities like Middle Musquodoboit used to have access to at least a small grocery store. That community lost its co-op store several years ago. Denise VanWychen, who lives in Brookvale, just outside Middle Musquodoboit, was interviewed for the documentary and said right now there are a couple of convenience stores and a market in the area, but for full grocery orders, residents have to travel about 20 kilometres. The film also looks at the role of independent grocers who serve these communities. That includes stores like co-ops. But Wilson learned the situation is even tough for them as they have to compete with larger grocers like Sobeys, Loblaws, Walmart, and Costco.

Wilson also interviewed Lisa McNeil who lives in a cabin in the woods on the South Shore. MacNeil said she lost her job, her house, and her car. The grocery store is about an hour and a half walk from where she lives in the woods. She can take a taxi, but it’s $40 for a return trip. That money comes out of her $60 total budget. McNeil has hens that give her eggs and she’s raising rabbits for meat.

“I have to admit, I didn’t know how badly some people have it,” Wilson said. “For me, this was very eye-opening and I really learned a lot.”

“I hope this really makes people aware. It’s really easy to blame grocery stores because they won’t open a Sobeys in Middle Musquodoboit. I think there’s a lot more to it.”

Wilson also said they wanted to take a diverse view of food deserts, so they talked with Mary Desmond who is African Nova Scotia and lives in the community of Upper Big Tracadie in Antigonish County. Desmond told Wilson that not only is getting food in that area an issue, but getting food from their culture is also challenging.

“And that is a big thing for us in our African Nova Scotian communities,” Desmond said in the documentary.

Anthanasisus Sylliboy, a nurse practitioner at the Millbrook Health Centre, and Father Ron Cairns from Sipekne’katik talk about how food deserts affect Indigenous communities. It’s Cairns who points out that his community is surrounded by farms and yet getting fresh food into the community was a challenge. And while there’s food at conveniences stores, it’s mostly processed foods, and pop and chips. 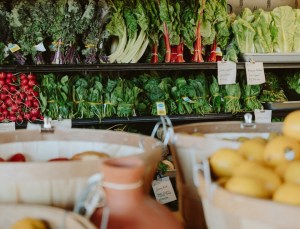 Finding fresh produce can be a challenge in food deserts in Nova Scotia. Photo: Ian Wilson/Deserted

Deserted also included the story of urban food deserts, notably the neighbourhood of Woodside in Dartmouth. That community had a Sobeys store until it closed in 2009. Now, residents in that neighbourhood have to travel a few kilometres farther to the Sobeys Penhorn location. And as residents note, getting there is not so easy since there isn’t an efficient and quick transit option. Some uses bicycles, but those trips are tougher, too.

“When a supermarket pulls out of an area, it’s very difficult to attract new stores into that area, especially if the area is not wealthy,” Wilson said.

But there was more to that story in Woodside. Sobeys also placed a 20-year restrictive covenant on the deed of sale that said no other purchaser of that space could sell food or medicine.

“To me, it was a decision that was driven by, frankly corporate greed,” Wilson said. “It was just an assault on the people who live there. I really wanted to talk to folks that used to shop there and what it meant to them to either have to take the bus or have to travel that extra bit, especially if they didn’t have their own vehicle.”

The documentary also included an interview with Dartmouth South MLA Claudia Chender, whose constituency includes Woodside. In 2018, Chender introduced a private member’s bill that would have prevented covenants like the one Sobeys used. 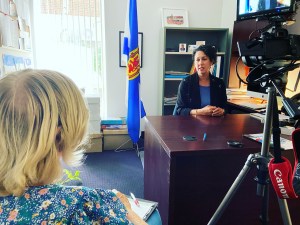 At one point in the film, Wilson himself does some shopping at a convenience store in the Woodside area, and for $30 bought several items, including eggs, milk, and canned goods. Nancy Ryan, a clinical dietitian at Nova Scotia Health, assesses Wilson’s purchases, noting that while the milk, eggs, and even the can of beans offer nutrition, most of his shopping, including a box of Pop Tarts, does not. And she points out just about all of the processed foods he purchased are packed with sodium.

Some of the Nova Scotians interviewed for the film have found some workarounds.

Spearing, the resident of Dean Settlement, runs Barefoot Farmers. On her patch of land, she and her family grow all sorts of food. Through the organization, the help others grow their food, too, supplying them with all the advice and tools they need. Those families can keep their produce, or Barefoot will purchase it to sell to other customers.

Spearing drives around to communities, and dropping off bundles of produce. Wilson said he asked Spearing why she just doesn’t sell that food at farmers’ markets. And she told him that requires a long-term commitment and there are fees for a stand, which ca be a barrier for some smaller farmers. Spearing suggested what’s really needed are free spaces where any farmer with extra produce and go and set up. 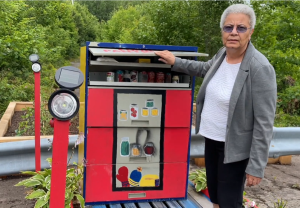 Meanwhile in Upper Big Tracadie, Desmond took an old filing cabinet that was bound for the landfill and transformed it into a community pantry. She had an artist friend paint the exterior of the cabinet in bright colours and designs, and now it sits at the end of a lane, and is filled with food available for free for anyone who needs it. Now, the community has taken over, even adding solar lights so people can access the pantry at night. Desmond said, though, the pantry is just a “band-aid.”

“Thank god they do, but you just feel like you’re snipping at it and not getting to the underlying problems,” Wilson said. “It isn’t just access. It’s knowing what to access.”

As for solutions, there’s really not one that will solve the issue. Even many of the interviewees in the documentary admitted there wasn’t one solution. Wilson said he wonders how the province and communities encourage small grocery stores or small outlets that sell healthy foods set up shop in rural areas, and he admitted he doesn’t know the answer to that. And he also wondered how can we grow more ourselves year-round, including with container pot agriculture.

“Some how we have to get around to growing more, and not just four or five months of the year,” he said. “For me, what I found, the lower income where there’s not a concentration of money, income, whether that is rural or an urban area, there is a real lack of good food.”

“To me, this is a serious societal problem. I just want people to think about this. It’s all about awareness. It’s about what can you do in the small things. But also, try and support local. I know it’s a cliché, but we really need to support local. And if that means buying your local lettuce instead of California lettuce, then you should do it. But it’s a very complex problem.”

Desmond offers a thoughtful comment on the issue at the end of the film: “It’s not just one person’s responsibility; it’s everyone’s responsibility. Nobody should go hungry today. Nobody.”

The film is available online at here YouTube and it will air on Eastlink on March 19.