You are here: Home / Featured / Do the “your speed” signs on the MacKay Bridge approach work? 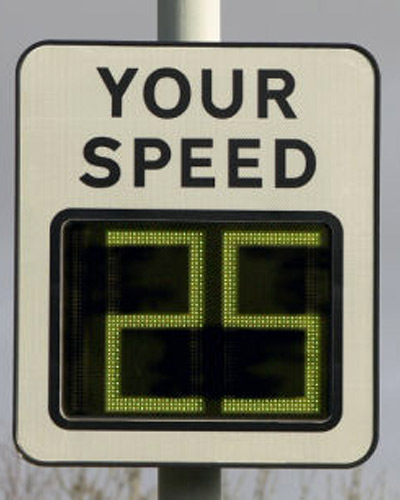 Towards the end of Monday’s Police Commission meeting there was a short discussion about the value of “your speed” signs that tell drivers both the posted speed limit and the speed they are actually travelling. Deputy Chief Bill Moore cited the before-and-after experience of the Bridge Commission, which has put such signs at the approach to the MacKay Bridge toll plaza. The evidence shows that the signs work, said Moore, and so therefore the police department’s traffic division is considering putting them in other locations.

I’ve long been a fan of such signs, because they’re a gentle reminder to drivers to slow down without heavy-handed police enforcement. But do they actually work? To find out, I called Alison MacDonald, the aptly named communications person for the commission, to get the stats Moore had referenced.

Unfortunately, the stats aren’t so clear. “For several hours a month a member of the corps commissionaires records the speed of people coming across the bridges from a couple of different locations and take an average,” says MacDonald in an email. So the available stats don’t measure speed right at the signs, but still, wouldn’t the mere presence of them be a reminder to drivers to slow down even before and after they pass the signs? Apparently not. Recall that the bridge speed limit is 70; here are the numbers MacDonald provided:

Signs installed in Fall of 2013

MacDonald says that the signs themselves record the speed of each car, but that data has yet to be analyzed. But without “before” data, I don’t see how the sign data can tell us anything about the effectiveness of the signs. Everything at this point is anecdotal.

If the police department does decide to use the signs, I hope they collect a lot of “before” data before installing the signs, so we can get some reliable stats.