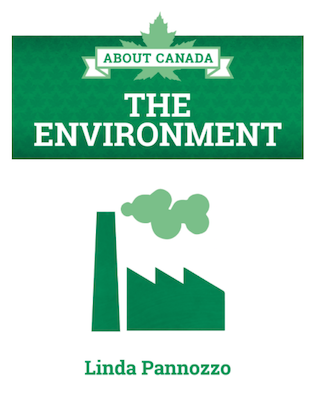 I’m excited to announce that Examiner contributor Linda Pannozzo has written a book: About Canada: The Environment. Here’s what Fernwood Publishing has to say about the book:

The environmental history of Canada is a bleak one. Resource extraction has always put profits before conservation. Settlers exploited both the land and the Indigenous peoples for commercial gain, and big business continues that policy with forests, fish, minerals, tar sands and pipelines. As the Earth veers toward a biological tipping point, as resources become scarcer, and as climate change threatens our survival, how is Canada responding? What kind of future can Canadians expect? What changes need to be made?

In About Canada: The Environment, award-winning author Linda Pannozzo examines the philosophical, economic and ideological landscape of our current environmental worldview. She connects our faith in the free market and our adherence to an economic system based on endless growth to illustrate the critical situation of Canada’s environment. Regulations and protections, where they did exist, have been eroded to benefit the bottom line, and industrial expansion and resource extraction, fueled by cheap energy and consumers’ insatiable demand for goods, have taken an unprecedented environmental toll — one that will only be worsened by the realities of climate change.

Ultimately, Pannozzo argues, the solution requires a profound shift in thinking — personally, politically and economically. The inherent value of nature must be recognized, for we cannot continue to destroy nature without ultimately destroying ourselves.

This is a slim (176 pages) book, but full of heady content. I’m still making my way through it, but I’m impressed at Pannozzo’s grasp of, well, everything. She ranges from the history of capitalism to detailed descriptions of migratory patterns with the same authoritative and studied voice found in the series of investigative articles she has written for the Examiner.

(Speaking of which, I’ll be posting something from Pannozzo later today.)

And Fernwood has graciously made five copies of the book available for the Examiner’s subscription drive. Five randomly selected people who subscribe in November will be contacted and mailed a free copy of the book. So, just one day left for a chance to win the book.

This action will include classroom teachers, administrators, school psychologists, speech language pathologists, school board consultants, and other NSTU public school members who work for school boards and the Department of Education and Early Childhood Development.

During work-to-rule, teachers will focus exclusively on teaching students in a safe learning environment, preparing and implementing lesson plans, and maintaining appropriate contact with parents/guardians of students who are at risk and/or have special needs. Nova Scotia students will continue to receive the best education we can give them.

Teaching and preparing for lessons will continue.

This action will demonstrate the scope of activities that teachers do for students that go above and beyond, and those that prevent them from directly teaching students.

Specific things that will be impacted during work-to-rule include:

In response, Education Minister Karen Casey said she is “disappointed” that teachers have decided to work to the terms of their contract, but then told CTV she was prepared to live with a work-to-rule situation indefinitely.

Michael Gorman, reporting for the CBC, breaks down the province’s claim that the teachers’ work conditions demands will cost $171 million a year. I’d take those figures with a grain of salt… but one thing that jumped out at me is this:

Data entry: The union no longer wants teachers to have to enter data into software programs TIENET or PowerSchool. The government estimates this would cost $13 million based on hiring one new person for each school.

When I talk to teachers privately, they almost always bring up the PowerSchool programs — and two teachers have separately asked me to investigate how PowerSchool was adopted, suggesting that there were kickbacks or worse involved in the procurement. But the point is, teachers really, really hate PowerSchool. They feel it is micromanagement to an absurd degree, that it takes from their teaching time, and is insulting of their professionalism.

Such continuously increasing data collection and mechanization of the schools inevitably led to a breaking point for teachers. My sense is this explains the collapse in negotiations. Pay and benefits were always negotiable, they didn’t like classroom sizes but could deal with them, but once they were treated like replaceable cogs in an education machine, compromise was off the table.

As I see it, there are only two ways out of the morass we’re now in. Stephen McNeil can start treating teachers like human beings, not mechanistic cogs in an education factory, and respect their professionalism, or he can double down on the attacks and Nova Scotia becomes the Wisconsin of Canada, and McNeil will become a Canuck version of Scott Walker.

Incidentally, something I learned from the Students for Teachers Facebook page (see below) is that there is a “Breakfast Club” at Dartmouth High, now cancelled. An organizer for the group wrote:

Broke my heart to tell the breakfast club volunteers that we are officially cancelled as of next Monday. 40+ students a day at DHS rely on the breakfast program for free healthy breakfast to get them through the day. This barrier to education is unacceptable and just shows how much impact teachers make on the school. Our schools working conditions just became a lot worse with students now going hungry throughout the day. 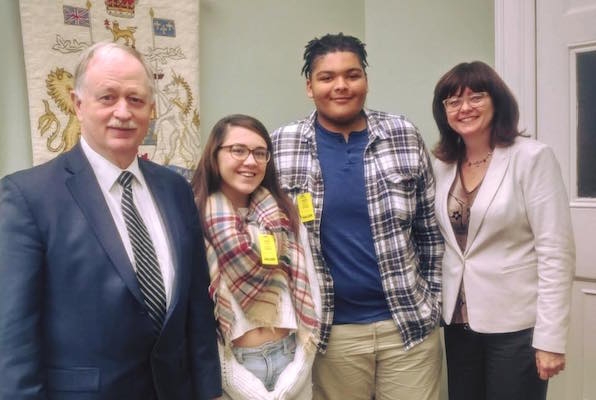 A group of high school students have formed a Facebook group called Students for Teachers and have announced a student walkout. Organizer Kenzi Donnelly, 17, explains:

Students for Teachers are leading a student walkout this Friday the 2nd. Students will respectfully leave classes at 12:45, and go to their area/schools respective rally/march. Students who are taking part are expected to organize and communicate these plans amongst fellow classmates in the area. My school for example, Prince Andrew High, will be marching with signs down Main Street. Dartmouth High will be rallying outside their school parking lot. We are making flyers to spread the word, and please make signs for your event afterwards. This is to protest the government, not Teachers.

It’s fantastic that young people are getting involved politically, and this may be the best thing that comes out of the labour dispute. We’re interviewing Kenzi for Examineradio this week. 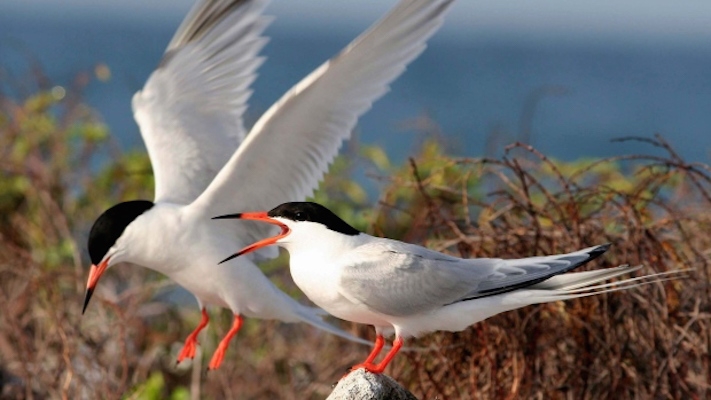 Roseate terns. Photo: US Fish and Wildlife Service via the CBC

The number of breeding pairs of roseate terns in Nova Scota has dropped by about half over the past decade, to 73, report Cassie Williams and Richard Cuthbertson for the CBC:

Adult roseate terns have a black cap and black bill with red at its base, and a long white and forked tail that resembles long streamers when it’s in the air.

The birds live on the coasts and islands along the Atlantic, Indian and Pacific oceans. The Canadian population can be found almost exclusively off Nova Scotia, though they also live on Machias Seal Island in the Bay of Fundy and the Magdalen Islands.

There are existing protected areas for the birds on Sable, Country, North Brother, and South Brother Islands, but the federal government has extended those areas 200 metres out to sea in an attempt to further protect the birds.

Williams and Cuthbertson interview Andrew Boyne, head of conservation planning for the Canadian Wildlife Service, who explain that no one is quite sure why the bird population is declining. He notes that one stopover for the birds is Cape Cod, but also that:

Another threat to the population is mink. According to the [Species At Risk Ac] registry, a single mink killed almost the entire population of chicks from the Brother islands colony in 2003. The animal was captured, but another mink devastated the colony in 2004.

The Brothers Islands are just off the Yarmouth County coast, where many mink farms are located. The CBC article doesn’t say if the mink that destroyed roseate terns had escaped from a mink farm. 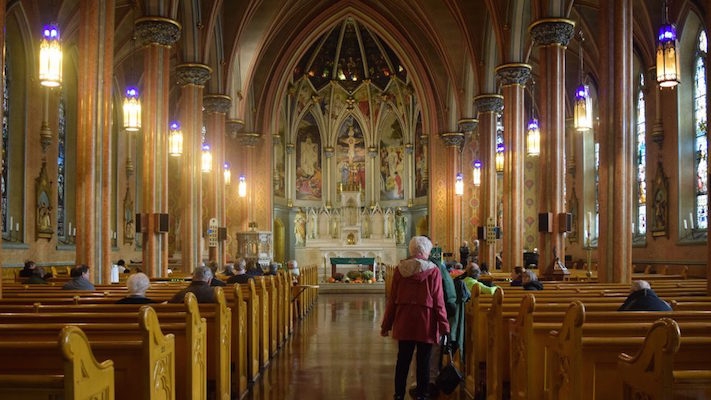 Writing for The Signal, the student publication at the King’s Journalism program, Payge Woodard has an interesting article on efforts to save the 131-year old Saint Patrick’s Church on Brunswick Street. 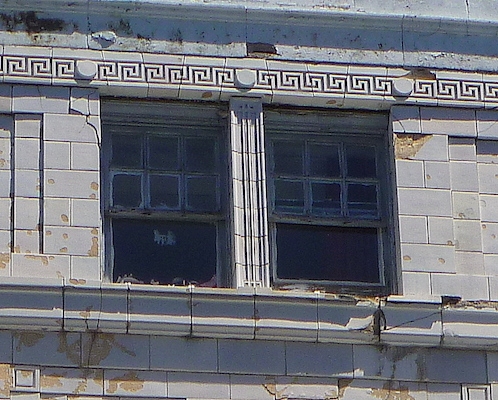 In yet another episode of “Stephen Archibald teaches us how to really see stuff that’s all around us,” Archibald discusses the Greek key:

It is an ancient pattern that comes in many variations. In the west it is associated with Greek and Roman arts and architecture and is often found on buildings inspired by classical design.

Archibald then goes on to show us lots of local examples, including on City Hall; “looking appropriately ancient on the crumbling terracotta facade of the 1911 Pacific Building on Barrington Street” (above); on the railing of the Lord Nelson; even on Kleenex packages. Read through and contemplate how the Greek key merged with the ancient Asian design that we now know as the swastika. 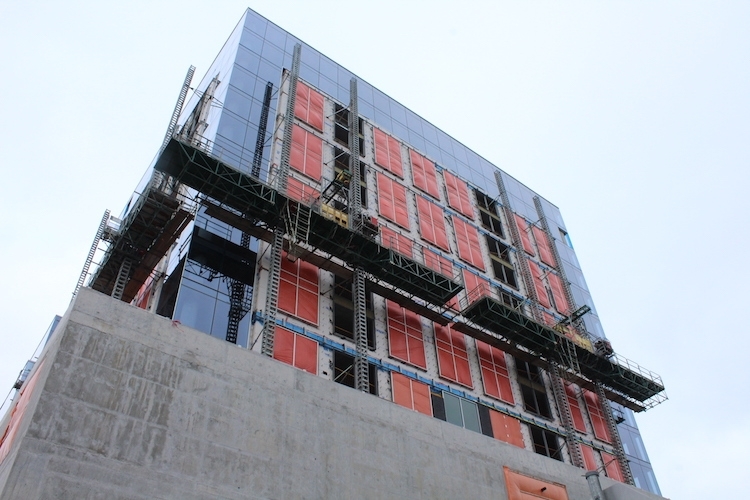 Construction of the hotel above the convention centre is nowhere near completion, and an operator of the hotel has not been announced. Photo: Halifax Examiner

I have some random thoughts on the Nova Centre.

I criticized what I still think will turn out to be a horrible business model for the convention centre part of the complex, but never thought construction of the project would be an issue. I assumed the public subsidy (and exemptions written into HRM By Design) made the whole thing a money-maker for developer Joe Ramia.

I still think the project will be finished, and everything will proceed, albeit later than thought… but some doubts are beginning to creep in, and I can’t shake them.

A projected three-year construction project is now a five-year construction project. I’m told the province is supplying the financing for Ramia (I’m not sure how that works, to be honest), so that’s not the issue, but in government circles they talk about “construction inflation” running at 10 or even 15 per cent annually, so total costs of the project must be going up, no? And the government subsidy is a fixed dollar amount, not adjusted for inflation or for Ramia’s increased costs.

On the income side, Ramia has announced exactly two tenants: the convention centre and BMO. The vast bulk of the project is as of now empty. There’s not even a hotel operator. Sure, Ramia can give away leases for next to nothing to fill the buildings — I’m told government offices lease some downtown space for nothing but the utilities cost — but how does this make money? Or enough money to pay for the project?

Like I said, I still think the thing will be finished, but I am increasingly thinking there’s some chance that it won’t be. Or maybe Ramia’s company Rank, Inc. goes bust and the project is picked up in an asset sale by some other company?

Human Resources (10am, Province House) — the subject is “School to Success: Clearing the Path.”

The Gord Downie & Chanie Wenjack Fundraiser (4pm, The Pub at Dalhousie) — Live streamed silent auction and fundraiser prior to Gord Downie’s performance of The Secret Path at the Dal Arts Centre.

He Named Me Malala (6pm, McCain Building) — screening hosted by the International Development Education and Awareness Society as part of Dal’s 16 Days of Activism. 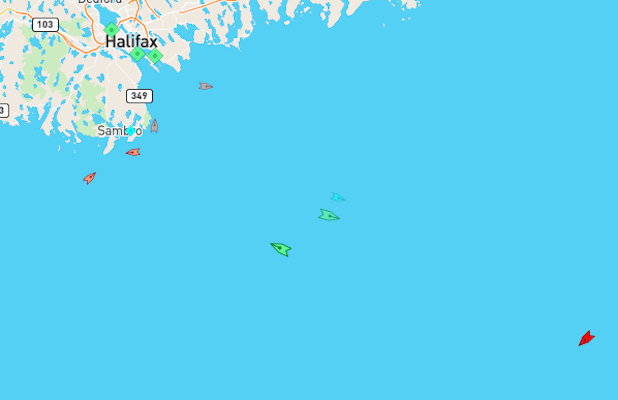 The approach to Halifax Harbour, 9:30am Tuesday. Map: marinetraffic.com

Come back for Linda Pannozzo’s piece.