Given the storm, this is an abbreviated Morning File focused on all issues snow-related. I’ll return to normal formatting tomorrow. 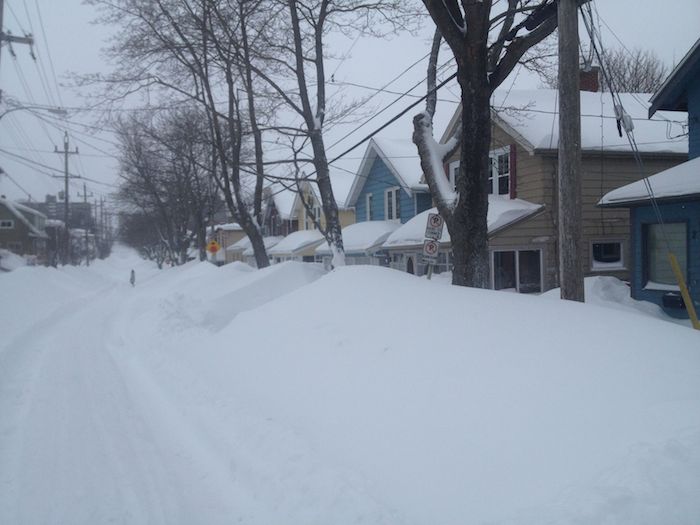 Halifax yesterday received its biggest snowfall in an already difficult winter. We’ll argue about numbers forever. The Environment Canada website says just 93 millimetres fell at the airport, but that can’t be right. CBC gives these numbers from unnamed meteorologists: 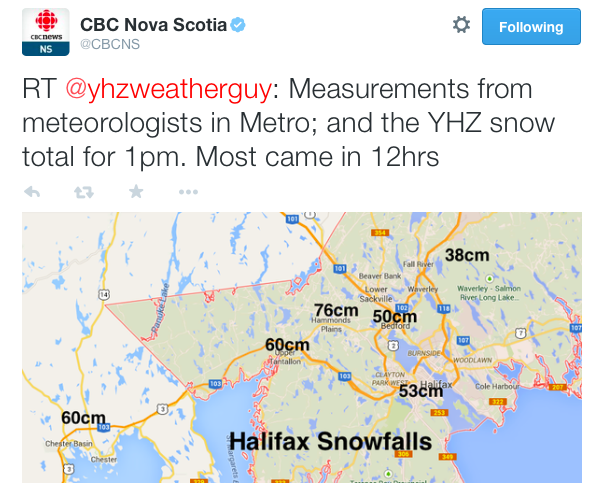 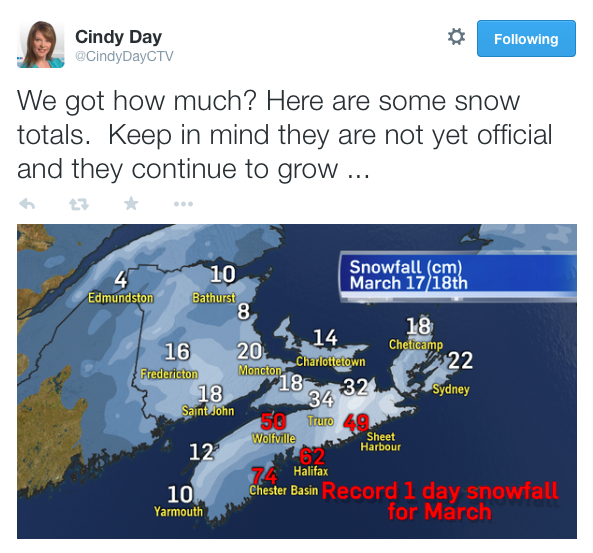 But people are saying that the snow that fell on them was still deeper. My neighbour Pat and I hit on two-and-a half-feet (70cm) in our downtown Dartmouth neighbourhood, while the Twitterverse is telling of snowfalls that are deeper still, especially in the Tantallon area.

One thing’s for certain: the city was walloped. Wednesday’s snow came atop of Sunday’s foot of snow, which came on top of… well, Halifax is basically the planet Hoth now. 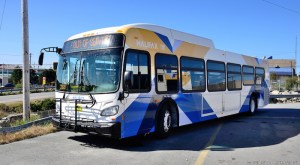 A heavy snow load on the roof of the Burnside Transit Centre has caused the municipality to close the building as a precautionary measure until the snow can be removed and the building is deemed safe for Halifax Transit employees. Current and forecasted blowing snow over the next 12 hours will not enable building maintenance staff to clear the roof in time for [today’s] scheduled bus service. The Burnside Transit Centre is the location of approximately 60 per cent of Halifax Transit’s fleet of buses, with 60-70 of those vehicles stored inside the building, as well as Access-A-Bus dispatch and scheduling office. As a result, Halifax Transit is unable to deliver a scheduled, fixed route bus service or Access-A-Bus service until access to the Burnside dispatch centre and buses is re-established.

A decision will be made at noon as to how to proceed.

Ferries, however, are running their usual schedule.

City offices will reopen at noon. Provincial offices in all of HRM will open at 10am. With buses sidelined, streets uncleared and sidewalks blocked, it’s not clear how workers are supposed to get to those offices.

Dalhousie is closed until at least noon. An announcement will be made at 10am about reopening.

Saint Mary’s is closed until at least 1pm, with a decision made at 11am.

Malls are open regular hours today, although “we’ll continue to be understanding of retailers whose staff are unable to make it to work due to road conditions resulting in modified hours” says Mic Mac Mall, and “we understand delays for retail operators and employees,”says Halifax Shopping Centre. Again, how workers and customers are supposed to get there isn’t explained.

City crews and contractors are overwhelmed, and there’s no realistic chance that anything resembling normalcy will return until at least Monday, says the city. Parking is banned from all city streets, all day long, until further notice. 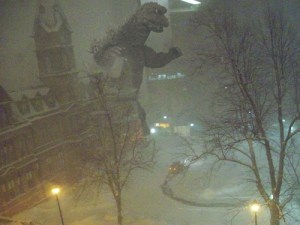 A plow operator on News 95.7 said that they were told to stay three feet from the curbs to lessen damage to the curbs.

Contractors who won tenders are not willing to pay overtime. So after 40 hours, operators are headed home with less than an acceptable job being done.

As a bus driver this has been the most stressful winter I’ve worked. And I’ve driven the 40-footers and 60-footers through all kinds of weather and hills. Daily, I have mere centimetres sometimes between me and a parked car. Barrington has been deplorable between Spring Garden and South street for weeks. Robie is the same between Cunard and Almon. I’ve lost 25 minutes in faceoffs with vehicles unwilling to wait to let me through on Barrington. Got in another on on Tuesday with a cube van attempting to pass a 1 southbound on Gottingen when I was northbound as a 7.

Hopefully this blanket parking ban will assist with the snow removal crews widening the streets enough to allow traffic to return to normal. As of right now, I wouldn’t be able to pass the 7/41 going the opposite direction of me on South St. The 35 wouldn’t be able to turn right off South to Barrington either if traffic is coming the opposite way.

Unfortunately, you’ll get people crying about tax hikes to pay city workers at overtime to clean the streets properly. But if you want the job done right, you have to pay a professional, whether it’s a renovation on your house, work on your car, or plowing on your street. If you don’t, then you get shafted, with a piss poor job and regret.

Forget about it. No one will be using the sidewalks today, or tomorrow, or anytime soon, as the snow is waist-deep. This means pedestrians will be in the street, adding to an already dangerous situation on streets narrowed by snowbanks. With the snowbanks at six feet and higher, drivers won’t see pedestrians at intersections. 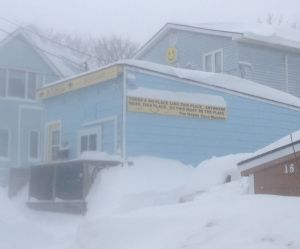 The Happy Face Museum wasn’t so happy in yesterday’s storm.

After Sunday’s storm, the contracted company didn’t clear the sidewalk on my street at all. Will they come anytime soon? I doubt it. My neighbours and I are digging out — I shovelled for five hours yesterday — but clearly not everyone is in a position to do so. I think councillor Waye Mason is right: we can (and must!) address the systematic failures in snow clearing at a later date, but we’re now facing an emergency; those who can should dig out, check on our vulnerable neighbours and clear around fire hydrants and at intersections. Everyone’s sick of this winter, tempers are short, and we’re rightly upset at failed governance, but a little more forbearance and helpfulness is called for.

As for those systematic failures, I’ve explained them here. People are going to resist aborting the contracts and putting sidewalk clearing back in the hands of city workers, but that’s what’s called for. If we can’t get that, however, at the very, very least, we need to change the way the contracts are structured. As is, contractors bid on providing service for a four-year contract, for one seasonal price each year (after last year’s failures, the peninsula contracts were cancelled and the service was re-tendered in three-year contracts).

This makes no sense at all. Trying to best competing bids, contractors bid as low as they can, hoping on a low-snow year, and then if there’s more snow, they cut the service by, as McCormack says, not paying workers for overtime, or, as is the case on my street, by not showing up at all. It’s clear that several contractors have simply given up — they were in it so long as they could make money, but now that the costs have become prohibitive, they’re out of here.

It’d be far better to have the contractors bid per weather event. Let the city decide when clearing is necessary and when salt and/or gravel needs to be applied, and pay the contractors accordingly. They’ll get paid for honest work: they’ll make a little money in nice winter years and a lot of money in difficult winter years. But the job will get done.

Understand, I don’t really think moving to per-event contracting would solve all the problems — the contractors will still ignore pedestrian islands in the street, still provide slipshod clearing of intersections, and still perpetuate the snow-moving wars with other contractors, resulting in such ludicrous situations as the six-foot pile of snow left in front of Dartmouth High on Monday. Properly, all snow and ice clearing operations should be done by one city department, well-paid people working cooperatively in the interests of we citizens and not a penny-pinching business owner willing to pull the plug in the face of rising costs. But if we can’t get a proper government-run program, I’ll reluctantly accept restructured contracts as a distant next best choice.

Councillor Gloria McCluskey says the city should declare a state of emergency, a view shared by many. 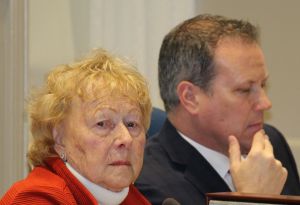 There’s no question that we are in an emergency — life is at risk, with people potentially trapped in their homes and fire trucks and ambulances delayed due to the snow. But I’m not sure a formal declaration of emergency will get us anything we can’t get without one. It doesn’t require a declared state of emergency to ask the military for help, or for council to call a special meeting to direct additional resources to snow clearing, or for the federal or provincial governments to come down with some quick cash for those most affected by the storm, especially for the many minimum wage workers who have lost weeks of pay this winter due to storms.

A declaration of a state of emergency is allowed through the Emergency Management Act, which was passed by the legislature in 1990, just after the Berlin Wall fell but before the Soviet Union collapsed. It has the feel of legislation written in anticipation of nuclear war, expecting not so much strained and broken government services but rather utter societal chaos. It gives the government power to deputize auxiliary police officers, search property without a warrant, order people off streets and highways, ration food, etc. I fear that invoking the act for situations that can be handled without it starts us down a slippery slope towards increased reliance on a police state.

On the other hand, I’m told that a declaration of emergency will provide insurance relief and allow for payments to people who have lost work or income from the storm. I don’t actually see that in the act, so I don’t know.

Feel good story of the day

Global reporter Brett Ruskin was on storm duty yesterday, reporting on emergency responders responding to a pregnant woman who was in labour. I’ll let Global explain the rest:

Crews cleared a path to the woman’s house and managed to get her through the snow on a sled and into an ambulance.

Ruskin returned to his car after they left and was preparing to leave when he heard a second woman’s plea for help. 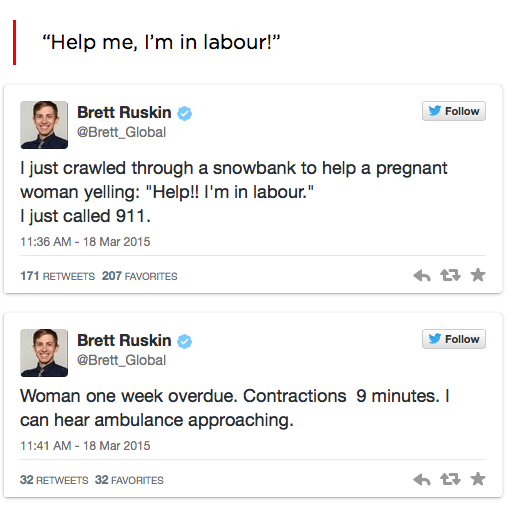 He put his camera down and crawled through the snow, and when he reached the woman he found out she was one week overdue and having contractions.

Ruskin helped the woman back through the snow and called 911. He had to explain that there was a second pregnant woman who needed help at the same location where crews had just helped the first one.

I’m as beat by this storm as everyone else. I apologize for the brevity of this post. I’ll dig some more today,  take a long nap and get back at it tomorrow.