You are here: Home / Featured / Demand is up for flu shots 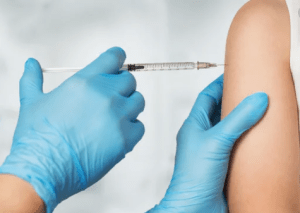 Diane Harpell is a frontline pharmacist and owns Medicine Shoppe pharmacy on Baker Drive in Dartmouth. Harpell recalled that for the 2020-21 flu season, demand for flu shots was “through the roof.” During last year’s flu season, pharmacies in Nova Scotia gave about 204,ooo flu shots to patients.

“There are huge opportunities for that to be even higher,” said Harpell, who is also the chair of the Pharmacy Association of Nova Scotia, in an interview with the Halifax Examiner. “Right now, the way the allotment is split is pharmacies are half and other providers are half. Obviously, our capability to provide vaccine for flu is more.”

Harpell said while she doesn’t have exact numbers, she said she remembers having conversations with clients who were getting a flu shot for the first time.

“I don’t remember these folks really saying they didn’t think it was right or that they had major concerns with the flu vaccine, but maybe just didn’t in the past get [the flu shot] because they didn’t understand the impact of them getting the flu shot would have on the health care system,” she said. “I think it was clear last year a lot of them understood that.”

It looks like demand for flu shots will be high again this flu season.

Still, another 34% of Canadians said they would “probably not” or will “definitely not” get the flu shot this season. 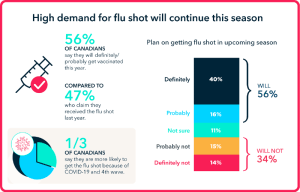 Results from a survey completed by the the Canadian Pharmacists Association (CPhA) in September 2021.

The Examiner reached out to Health Canada and the Public Health Agency of Canada for details on flu shot data for the 2020-21 flu season. While they didn’t provide a breakdown of data, spokesperson Anne Génier said in an email about 40% of adults across Canada got a flu shot in 2020-21 compared to 42% in the previous two seasons. About 70% of seniors age of 65 and older across Canada got the flu shot. That percentage is the same as for the 2019-20 and 2018-19 flu seasons.

Healthcare columnist Mary Jane Hampton said on CBC Information Morning on October 12 that about 40% of Nova Scotians over the age of six months got a flu shot, about 62% of Nova Scotia seniors got their shots, while the rate was much higher in long-term care homes at 90%. 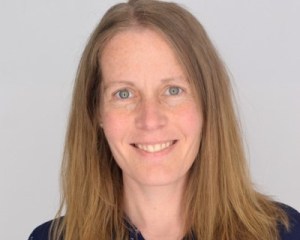 But while demand was high last flu season, Harpell said supply was an issue.

“We ended up not giving as many as possible because the supply was very challenging to access when the demand was there,” Harpell said. “Supply eventually did come in, but then the demand for flu shot was done. Demand and the need for flu shots was more than I’ve ever seen, but we didn’t necessarily give more because of the supply issue.”

Harpell said she has been told the supply for this flu shot season will be strong.

“All of the pharmacies that have been participating in the flu vaccine for the fall, right now we’re in the middle of placing our orders for the vaccine so we know how many vaccines we’ll be allotted to have. And we’ve been told the supply should be strong for this year. We’ll go week to week, to see how it’s going, of course.”

The Examiner reached out to the Department of Health and Wellness, and spokesperson Kristen Lipscombe said “influenza vaccination supply was not a concern last flu season and is not an issue this flu season thus far.”

According to news reports from November 2020, like this one from Vernon Ramesar with CBC, pharmacies did experience supply issues because demand for shots started earlier than previous flu seasons, although there wasn’t an overall shortage of flu shots.

When Nova Scotians can get the flu shot at pharmacies depends on the pharmacies themselves, as every pharmacy does vaccine clinics differently. Harpell said at her pharmacy, they have an online wait list where clients can sign on.

“It looks like we’ll be able to offer appointments starting the end of October,” Harpell said.

The Examiner also asked Health Canada and the Public Health Agency of Canada for data on last year’s flu season. Spokesperson Anne Génier said influenza was “virtually non-existent last year, thanks in large part to the public health measures in place to reduce the spread of COVID-19,” but she added that likely won’t be the case this flu season as COVID restrictions are lifted.

In an email, Génier said the Public Health Agency of Canada encourages Canadians to get vaccinated against influenza and follow public health measures, such as “staying home when you’re sick, improving indoor ventilation, washing hands regularly, covering coughs and sneezes, and cleaning and disinfecting frequently touched surfaces and objects.”

Meanwhile, Lipscombe at the Nova Scotia Department of Health and Wellness said the province is rolling out an awareness and education campaign to encourage Nova Scotians to get a flu shot.

Harpell said there are still myths surrounding the flu shot — such as the flu shot can give you the flu — and she sees them each season, including on her pharmacy’s social media accounts.

“I think you’re going to have a group of people who, unfortunately, will go down a hole on social media of conspiracy theories when it comes to any vaccine,” Harpell said. “I don’t know if we are ever going to change that; maybe we can make that smaller and smaller. Of course, we’re seeing that right now with COVID. Obviously, we’re here to have any conversations around that.”

Harpell said she’s not sure if there’s a direct correlation between the COVID pandemic and the increased demand for flu shots.

Harpell said she’s asking clients to not only get the flu shot this season, but to be patient with their pharmacies.

“They are the only health care providers that did not close their doors during COVID,” Harpell said. “So, they’ve been prescribing, immunizing, being non-urgent care centres, and doing the majority of COVID vaccines. So, please be patient. We will do what we can to get your flu vaccine, but it will take time.”