You are here: Home / Featured / Dealing with Dalhousie’s past

1.  Dalhousie report on its racist past released 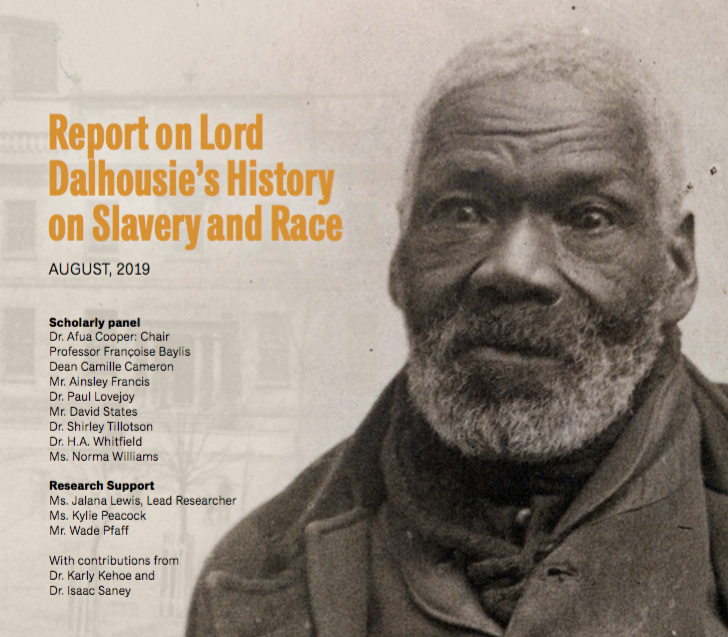 The cover of the recently released report featuring Gabriel Hall of Preston, “a black refugee who emigrated to the colony of Nova Scotia during the war of 1812.”

The Dalhousie panel appointed to look into the attitudes and actions of the school’s founder has published its report, writes Frances Willick for the CBC.

The Dalhousie Report gives resonance to the “Street Checks Report” in that it provides the historical basis for the current condition of Blacks in Halifax with respect to this particular discriminatory exercise. Many, if not most, of the Black Haligonians who are street checked are descendants of the Black Refugees of the War of 1812 and Caribbean and African immigrants.

Two hundred years ago, Lord Dalhousie as governor of Nova Scotia, in his bid to keep the province White, wanted to return the Black Refugees to their former slave masters in the US or deport them to such places as Trinidad and Sierra Leone. Policies of Lord Dalhousie’s government and of Nova Scotia’s previous and successive administrations ensured that the Black Refugees were relegated to a caste-like environment that normalized social conscription and educational and political marginalization. One wonders what African Nova Scotians might have achieved over these past 200 years if these barriers were not in place. Another important question is how might Dalhousie University, Halifax, and Nova Scotia atone for the lost opportunities Blacks have incurred in attempting to realize their potential and to self-actualize.

The report makes a number of recommendations to the University, focused in three areas:

Expressing regret for the institution’s and its founder’s connections to slavery and to anti-Black racism, past and present, and acknowledging the responsibility to take steps against anti-Black racism.

Supporting recognition of the historical realities of Black people’s lives in Nova Scotia and the valuable contributions they have made.

Taking concrete steps to repair the harms, especially in the areas of teaching and research, that have been the legacy of slavery in this institution and this province.

Among other things, the recommendations include a formal apology from the Dalhousie board of governors to the African Nova Scotian community, the establishment of bursaries and scholarships in honour of contributions of specific Black Nova Scotians, and the establishment of the Gabriel Hall Centre for the Study of Slavery and Abolition to support further research. 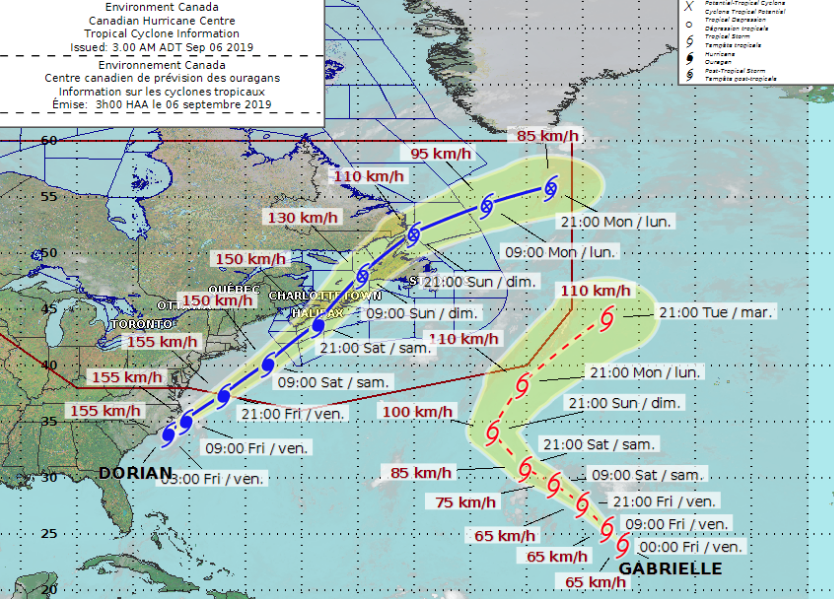 If you lived in Halifax in 2003, you certainly remember Hurricane Juan. You may also remember not being prepared for it, one bit. Since then I’ve noticed Haligonians take hurricane warnings a little more seriously, though I wonder when we will reach peak ‘boy who cried wolf’ psychology, whence all the energy that went into the warnings for the storms that ended up passing us by morphs into malaise over the warning for the next one. Hopefully not anytime soon.

If you’re looking to be prepared, the message from emergency measures pros is clear: batten down the hatches, and prepare to lose power. CBC News spoke to NS Power president Karen Hutt:

Hutt said Nova Scotia Power will have crews in position to respond to outages as soon as the conditions are safe enough.

She said Nova Scotians should expect to lose power.

“I’d be hesitant to try to be specific … but there’s no question that once you start to see forecasts that call for winds that are higher than 100 km/h, you can anticipate outages,” she said.

Here’s what the city’s Emergency Management division recommends should be in your “basic household emergency kit” which is ideally kept in a duffel bag or backpack in an easy-to-reach spot. They also recommend you keep a “corded” phone in your home, as cordless phones don’t work without a power source. The list also refers to payphones, so it seems like it might need an update, since they are as rare as hen’s teeth these days. Needless to say, if you’re without a landline, charge those devices and be prepared to rely on data. 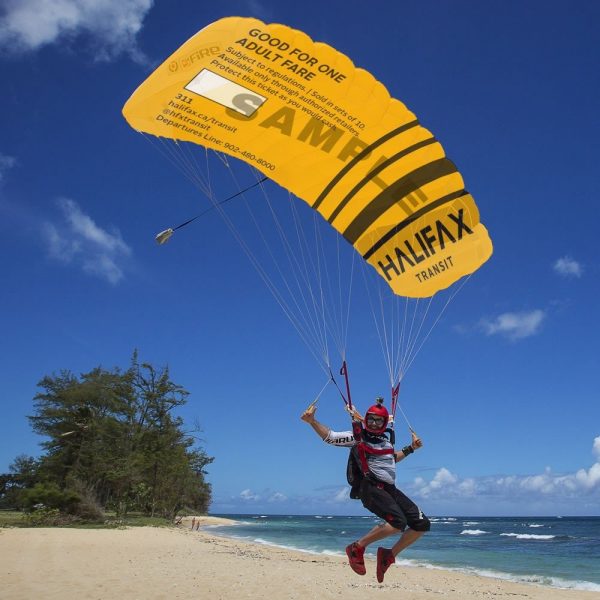 Halifax Twitter got plenty creative back when Halifax Transit announced new giant paper tickets were coming to town as part of their plan to modernize fare collection.

Halifax Transit’s new fare management system (the one that will use new, oversized tickets the size of paper money in advance of actual cashless technology) is behind schedule, and the CBC’s Jean Laroche spoke to three people who say the delay is due to problems with the new mega-tickets, though both the city and the ticket manufacturer deny the story. Unfortunately the city’s communications department is not explaining the delay any other way, reports Laroche:

The company, Canada Ticket Inc., and city officials deny there’s any issue with the tickets.

“The design and planning phase of the new fare management system is taking longer than originally anticipated,” municipal spokesperson Erin DiCarlo said in an email. She refused to elaborate.

If things had progressed as planned, bus and ferry riders would already be using the new tickets, which are the size of $20 bills and are intended to have enhanced security features, including infrared ink, to reduce the likelihood of fraud.

Last year, city officials said the tickets were needed as part of a plan to replace fare boxes with updated models that could eventually be modified to accept smart cards, debit or credit cards, or mobile apps. 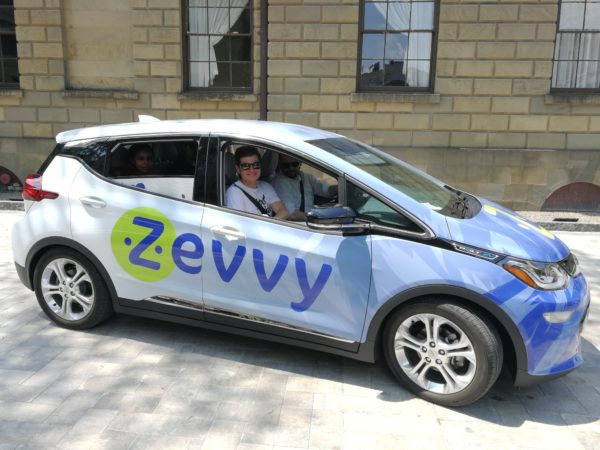 Meet Zevvy, an EV that’s been touring Nova Scotia this summer as part of a provincial promotion called Next Ride. Photo: Erica Butler.

Council’s environment and sustainability committee gave their stamp of approval to a city staff report recommending that a further report come back to the committee with a plan and budget to build more charging stations for EVs (electric vehicles) and to convert some of the city’s light duty vehicle fleet to electric.  The report will also include a strategy for getting authority from the province to be able to require electric vehicle charging stations in new developments.

“This is an opportunity for us to show true leadership,” Deputy Mayor Tony Mancini said during debate on Thursday.

“We want our citizens, we want our businesses to do it, we have to show leadership.”

Council declared a climate emergency earlier this year, and the staff report to the committee on Thursday said “electrification of transportation will be a key focus of the municipality’s forthcoming climate action plan with a view to 2050.”

In contrast to this modest step toward enabling EVs, Halifax Transit recently abandoned their own modest efforts to look into electrification of the transit fleet, a move which stands to save millions in fuel and maintenance costs. A year after getting council approval for participation in a cross-Canada pilot project which would have seen eight older diesel buses replaced with battery electric buses (all for the cost of diesel replacements), city staff decided to “mothball” the project.

Transit director Dave Reage cited concerns over lack of funding, despite the cost-of-diesel-replacement commitment being requested by the project coordinators, the Canadian Urban Transit Research and Innovation Consortium (CUTRIC). Council had already approved $1 million towards the project, and another $2.25 million had been secured for Halifax via federal government programs. That money now goes somewhere else. Reage also said Halifax Transit was simply not ready for the project, and predicted that electrification was off the table for another three years.

The current city staff report focuses on EVs only, with no mention of buses, and predicts an investment of about $600,000 for charging infrastructure, and a $200,000 investment in equipment to service any new electric vehicles in the city fleet. The report says EV replacements will cost an extra $8500 a piece after factoring in federal rebates. On the other hand they are expected to save $12,000 in fuel and maintenance costs over a five-year lifecycle.

The CBC’s Michael Gorman checks in on a 12 month pilot project by Lafarge Canada to replace coal they burn in their Brookfield cement plant with scrap tires, in an effort to reduce their carbon emissions. The company is still ramping up to full tire burning, and so far, reports Gorman, they have “not seen any notable changes.”

The project has locals worried that the effort to reduce GHG emissions could end up adding other harmful pollutants to the air.

The cement industry is a major emitter of CO2, not just from the fossil fuels burned to power kilns, but even more so by the chemical reaction, called calcination, inside the kilns themselves which is required to produce concrete. The BBC reports that, “in 2016, world cement production generated around 2.2 billion tonnes of CO2 – equivalent to 8% of the global total. More than half of that came from the calcination process.”

Yesterday, Philip Moscovitch wrote about a news report that 14 New Brunswickian NDP candidates had defected to the Green Party. Moscovitch had a measured response, and took the extra step of interviewing local two local candidates, one NDP and one Green, asking for their reactions. I found Moscovitch’s take on it interesting.

By yesterday afternoon, NDP members contacted us asking for a correction. They said that Jonathan Richardson, who was the source for news articles about the defection, had overstated the extent of the defections. They’re right. Here’s iPolitics report on that:

A list of 14 former NDP candidates in New Brunswick, reported earlier this week to have defected to the Green Party, now consists of just eight — and the Green Party’s provincial executive director is accusing the New Democrats of pressuring their old supporters to change their minds.

“I must say, it’s a very well played game from the NDP in blurring what’s really a good news story,” the New Brunswick Greens’ Marco Morency told iPolitics Thursday afternoon, confirming that at least some of the individuals on a list shared Tuesday were not, in fact, joining his party. Morency said at one former candidate had called him to say their name had been included by mistake.

He says some of the defecting individuals had received phone calls from the NDP in Montreal since announcing their intentions. He alleged that “there’s been some pressure somewhere” when it came to those changing their minds, though he confirmed that he hasn’t spoken with many of the individuals in that group.

“This is just vicious old politics,” he said in a phone call.

Morency’s confirmation comes hours after New Democrat leader Jagmeet Singh accused Green Party leader Elizabeth May of misinformation to reporters in Toronto, claiming that the reports of 14 defectors in New Brunswick were “incorrect.” “That’s something that, right now, is a developing story. It turns out the Green Party wasn’t as accurate with their information as folks would have liked them to be, and it turns out some of that information is not true,” Singh alleged Thursday morning.

Earlier this week, at a news conference in Moncton, a group of former NDP candidates announced their mass defection to the Greens, multiple outlets reported.

I’ll let readers decide for themselves to what degree the Greens’ overstatement reflects a conscious misinformation campaign and, on the other hand, what to make of the seemingly inarguable fact that eight NDPers defected.

No matter how you read the situation, however, I think Moscovitch’s commentary was fair. 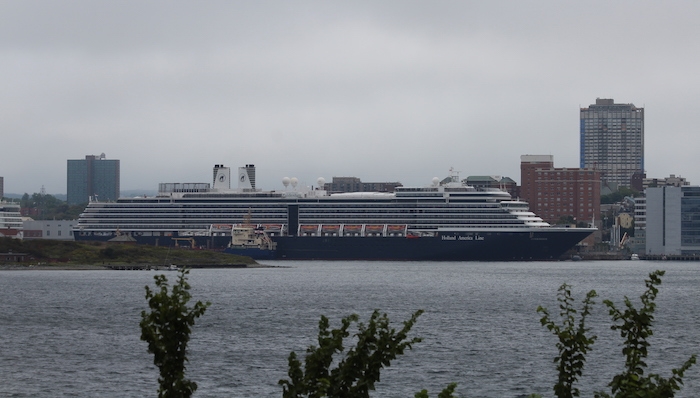 No cruise ships this weekend. Naval ships depart on Monday.

Now off to the backyard to pack up the potential projectiles.