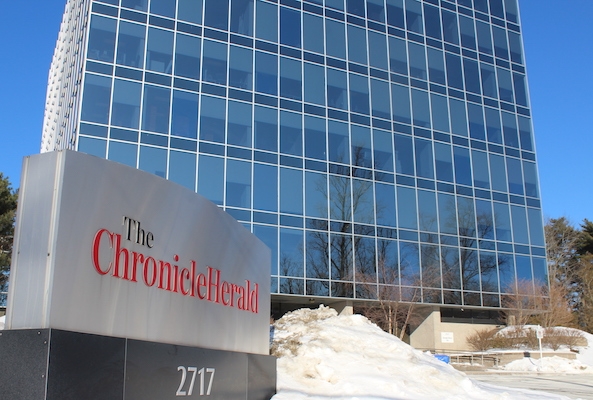 The trial of Calvin Clarke’s suit against the Halifax Herald Ltd. continued in Supreme Court yesterday, with testimony from Nancy Cook, who holds the ridiculous title of “chief people officer” at Saltwire, the Herald’s parent company, followed by Alex Liot, the VP of Sales.

Clarke is claiming “constructive dismissal,” which basically means that the company purposefully made his job so miserable and untenable that he had to quit.

Cook and Liot explained that traditional ad sales for the newspaper were tanking — Liot said at a rate of five to 10 per cent per year, with some years even higher — so the Herald was expanding its product line into other print products, online advertising, flyer delivery, swag, and so forth. Liot said that the Herald has even recently acquired a private security firm.

The idea is that a company might be a long-time Herald advertiser, but the sales rep could broaden the range of products the Herald provides the customer. So, you might get a deal on a display ad, but only if you also buy a larger package of online advertising, some baseball caps with your company logo, and I guess, a security guard to spy on your striking workers.

The way both Cook and Liot told it, Clarke was an excellent salesperson, a go-getter, game to take on new challenges, and an all-around great person. “People like him,” said Liot. “I like him. We played golf together.” And, they continued, since Clarke was so good at his job, coupled with the fact Clarke had been out on medical leave, it made sense that when he returned to work he be repositioned to create new sales vehicles at Bounty and Headlines (see yesterday’s article for context). Clarke’s position as a volunteer coach was an added bonus, said Cook. (And is it anyone else, or am I the only one who thinks it’s not a great idea to name a printing company after a brand of toilet paper?)

My read on this (but really, what do I know?) is that Cook was destroyed on cross-examination by Clarke’s lawyer Colin Bryson.

Liot’s testimony was more substantive. He’s everyone’s stereotype of a buzzword-slinging salesperson, but on the smart and educated end of that spectrum. He’s kind of like the “plastics!” guy in The Graduate, but better looking and able to mask his asshole-y-ness with a B-list performance of charm. But, for myself anyway, it didn’t work — he’s too clever by half. “In total candour,” he said at least four times, which I understood as a tell that he was about to say some outrageous untruth, and as he worked through the numbers and rationales for transferring Clarke, I kept thinking to myself, “you’re so smart, but you’re working for Sarah Dennis and Mark Lever?”

Alas, I couldn’t stick around for the cross-examination of Liot. (I had to run to interview Danny Graham for today’s Examineradio.) So I don’t know how this is going to play out. But at the heart of the trial is whether Clarke’s transfer was a sensible move of a competent salesperson into a position with realistic expectations, or whether it was just a bid to get rid of him.

There’s a complicating factor as well. And that’s that Clarke was given a reprimand on his return to work — in fact, he was handed the reprimand in the very meeting in which he was reassigned, which suggests the two were connected.

The full extent of that reprimand wasn’t revealed in open court, but part of it involved things that occurred when Clarke was on medical leave — Clarke’s clients complained about other sales reps, his replacements, falling down on the job.

And there was a complaint by Darrell Cooke, the president of Vintage Flooring in Bayers Lake. Clarke had set up a meeting with Cooke, but as he was driving to Bayers Lake his son’s school called him to say that the boy had had a playground accident and needed medical attention. (Clarke and his ex-wife share custody of their children, and this was Clarke’s week.) Clarke said he pulled over and called Cooke to explain the situation, but only got his voicemail. When Clarke didn’t show up at the appointed time, Cooke fired off an angry email to Herald president Mark Lever. At some later point, however, Cooke retrieved the voice mail, understood the situation, and wrote a second email apologizing for his earlier anger and saying that of course Clarke needed to attend to his son. As Clarke told it on the stand, however, only the first email was referenced in the reprimand.

In any event, this now sits with Justice Suzanne Hood, who will presumably make a decision in coming days.

“Halifax Partnership has launched a website with details from their Amazon bid touting $10 billion in savings on operation costs and direct flights from Halifax to Seattle and San Francisco — if Amazon comes to town,” reports Cory Funk for The Signal, the publication for King’s College journalism students:

The bid touts $10 billion in savings over 10 years in operating costs for Amazon compared to its main headquarters in Seattle.

The number is based off a 2016 report, funded and produced by KPMG on competitive alternatives that ranked Halifax the 6th lowest costing place to do business in among 111 others worldwide. Halifax Partnership used KPMG’s methodology to come up with the $10 billion figure.

The details of how they reached that number, however, haven’t been disclosed.

“To be blunt, I don’t want our competitors to know exactly the methodology that we calculated that because it’s quite real,” said [Ron Hanlon, CEO of Halifax Partnership]. “It’s actually very real because I don’t want them selling against it.”

Yeah, I have a secret plan to build a Halifax Examiner world headquarters that will employ 15 million Haligonians, but I can’t release it because Truro might use it against us. 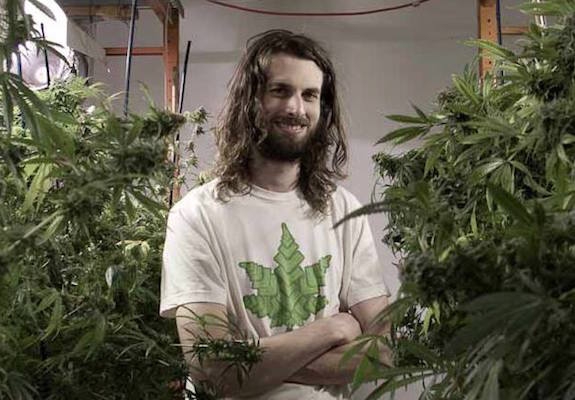 An RCMP officer on patrol on Hwy. 7 in Lake Echo stopped a truck for speeding yesterday just before 4 p.m. The stop has resulted in the arrest and charges of an East Chezzetcook man and a seizure of significant quantities of marihuana products.

After speaking with the driver, the police officer arrested him, and acquired grounds to search the vehicle. In total, police seized over 6 pounds of marihuana, 148 grams of “Shatter” and approximately 500 capsules of Cannabidiol, also known as hash oil. A large quantity of cash was also seized.

Christopher Enns, 33, has been charged with:

• Possession of a Controlled Substance for the Purpose of Trafficking (2 counts)
• Possession of Proceeds of Crime over $5000
• Breach of Conditions
• Enns was held in custody following his arrest and is appearing in Dartmouth Provincial Court today. The investigation is ongoing.

Enns is the cannabis crusader who operates the Farm Assists store on Gottingen Street.

Enns is one of those people who believe cannabis cures all ails — cancer, bad attitude, economic crisis, squeaky ball joints, you name it — and he believes in spreading the gospel far and wide. He’s harmless, and I admire his defiance in the face of repeated arrests; besides which, such arrests seem pointless as legalization approaches.

4. The price of parking 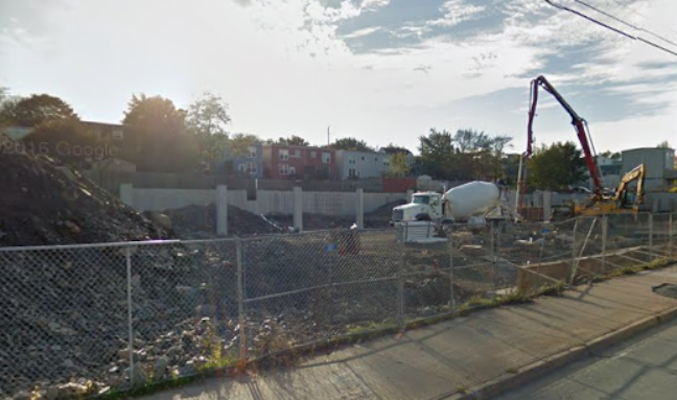 The red house is Dawn Sloane’s. Photo: Google Street View (the new building has since been constructed)

Former Halifax city councillor Dawn Sloane and two of her neighbours are suing the nonprofit Creighton Gerrish Development Association (CGDA) in small claims court, alleging that CGDA is depriving them of their parking spots.

CGDA built and sold the three townhouses through a federal-provincial affordable housing program. CGDA aimed the development at long-term residents of the neighbourhood making between $30,000 and $50,000 annually, a criterion Sloane met when she applied to buy the home, with a five per cent deposit paid in 1997.

CGDA has always struggled to bring in money for its projects, and Sloane waited seven long years for the townhouses to be built. In the meanwhile, Sloane was elected to city council in 2000. She and her two neighbours finally purchased their homes in 2004.

The residents claim each townhouse was designed and built for a residence above a business space in the basement. “This requires two parking spaces,” says each of the claims. “Prior to and after purchasing my house, I was promised access to parking along the back of my property line.” Each resident has filed two $25,000 claims, one for each allegedly promised parking spot.

On the other side of the property line is the former Sobeys lot that faces Gottingen Street across from the north end library. CGDA acquired the lot many years ago with hopes of building an affordable housing complex, and while waiting on that hoped-for development, the lot has been used for parking by area residents, including Sloane and her neighbours. But after many failed attempts, CGDA finally sold off the property to developer Ross Cantwell, who is now constructing a five-storey “as a right” development.

A concrete wall has been built at the rear of Cantwell’s development, which means Sloane and her neighbours can’t park there any longer.

“CGDA took the proceeds from the sale of the house without providing parking access to me, therefore breached their promise and unduly profited from their actions,” reads each of the claims. “I claim I was defrauded.”

Grant Wanzel, the president of CGDA, did not respond to a request for comment. Earlier this week, CGDA defaulted on its registry with the Registry of Joint Stock Companies.

On-street parking on Creighton Street is reserved for residents, who must purchase a permit.

“There will be no Atlantic University Sport (AUS) football championship game this year in light of an investigation into the eligibility of a Saint Mary’s University player, but the Acadia Axemen will represent the conference in the national semifinals,” reports the CBC.

The unbylined article explores at length the issue of former CFL player Archelaus Jack’s eligibility. The university denies that it acted inappropriately.

Chemical Biology Probes from the Bottom of the Periodic Table (Friday, 1:30pm, Room 226, Chemistry Building) — Mark Nitz from the University of Toronto will speak.